Where Did a U.S. General Put the Ceremonial Gifts He Got From Foreign Leaders? In the Trash. 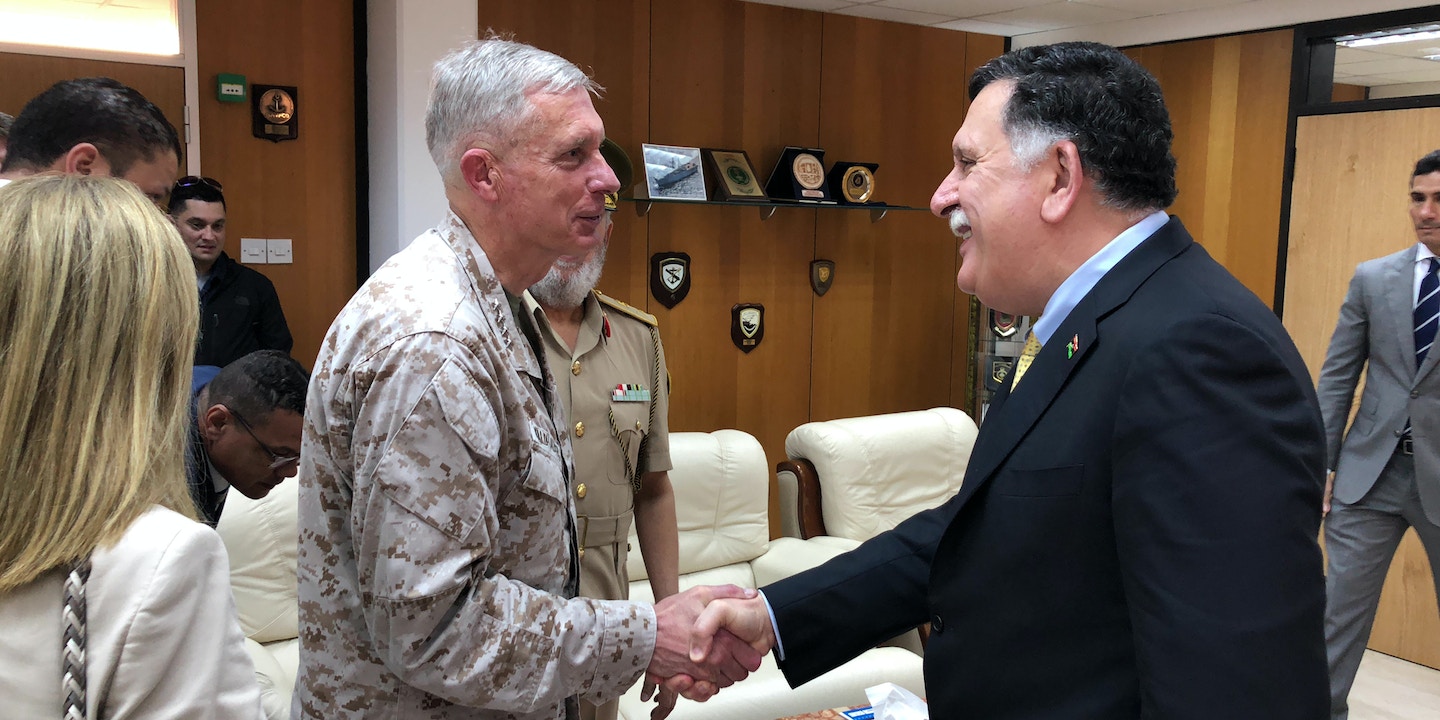 It was the first time a high-ranking U.S. military official had visited Libya in three years.

“Today’s meeting was another positive step in the continued process of restoring security here in Tripoli and across Libya,” said then-chief of U.S. Africa Command, Gen. Thomas Waldhauser. “We commend Prime Minister al-Serraj for taking important steps in the process of restoring unified governance to Libya.” To mark the occasion, on May 23, 2017, Fayez al-Serraj presented Waldhauser with a commemorative plaque.

It was tossed in the trash.

The statue given to Waldhauser by the chief of staff of Mali’s army?

The Tunisian “peace tree”? A ceremonial sword from Djibouti’s defense chief? A plaque from the Tunisian army’s chief of staff?

They all ended up in the rubbish heap.

Military records obtained by The Intercept through the Freedom of Information Act show that while AFRICOM’s legal review deemed it perfectly permissible for Waldhauser to accept these gifts — from plaques and coins to clothing and trophies — he regularly put them in what the records refer to as the “trash.”

(After publication of this story, AFRICOM contacted The Intercept to say the file was a working document and was inaccurate. AFRICOM stated that almost all of the gifts were retained in some fashion but failed to provide The Intercept with any evidence that the gifts were actually retained. AFRICOM also failed to make available any officials who were involved in the alleged retention of the gifts.)

The files show that Waldhauser did retain a fair number of items for himself, including a keychain presented to him in 2017 by Mauritania’s deputy chief of defense, as well as champagne given to him last May by the superintendent of France’s Oise-Aisne American Cemetery and Memorial, the final resting place of 6,012 Americans who died in World War I.

Other gifts became the property of AFRICOM and found a place in its Stuttgart, Germany, headquarters, including a bronze statue of a drummer given to Waldhauser by Paul Biya, president of Cameroon, and a medallion from Mali’s chief of defense. But Waldhauser trashed many other items, such as cufflinks given to him by Arikana Chihombori-Quao, the African Union’s ambassador to the United States; a wooden statue from the Malian army’s chief of staff; as well as commemorative plaques given to him by officials from Algeria, Benin, Burundi, Djibouti, Ethiopia, France, Ghana, Italy, Kenya, Libya, Mali, Mauritius, Morocco, Niger, Nigeria, South Sudan, Tunisia, and Uganda, even though he was authorized to keep them.

Waldhauser took part in a great number of these events himself — and while meeting with top allied commanders and heads of state, he was often presented with commemorative keepsakes.

The command complies with Defense Department guidelines concerning gifts, spokesperson John Manley told The Intercept, noting that the fate of such keepsakes “is left to the discretion of the recipient.” He said that going forward, terms like “trash” and “destroy” would be dropped from the records.

While most of the souvenirs were gifted by foreign allies — the great majority of them the “African partners” that Waldhauser frequently lauded in public — the AFRICOM chief also spurned some gifts presented by Americans. While AFRICOM kept an engraved pewter plate presented to Waldhauser by Speaker of the House Nancy Pelosi, when it came to a six-inch “badge trophy” from the FBI’s Africa Unit and a coin and box from the deputy commandant of the U.S. Army War College, both were sent to the scrap heap.

And what about the American flag that then-Rep. Pete Sessions, R-Texas, presented to Waldhauser during a 2017 photo-op? The documents indicate that Sessions’s gifted Old Glory, which once flew over the U.S. Capitol, was destroyed.

However, when The Intercept inquired about it, AFRICOM claimed that its updated records show the flag had been retained. The command could not, however, explain when its database was changed, by whom, or for what reason, and admitted that the ultimate fate of the flag was unclear. The AFRICOM documents are devoid of details about just how this star-spangled banner met its end, describing the “gift location” in just one word: “trash.”

This story has been updated to include comment from AFRICOM that was provided after the story was published.