Lawmakers are unclear precisely what the intelligence community currently considers legal, given the classified nature of the operations. 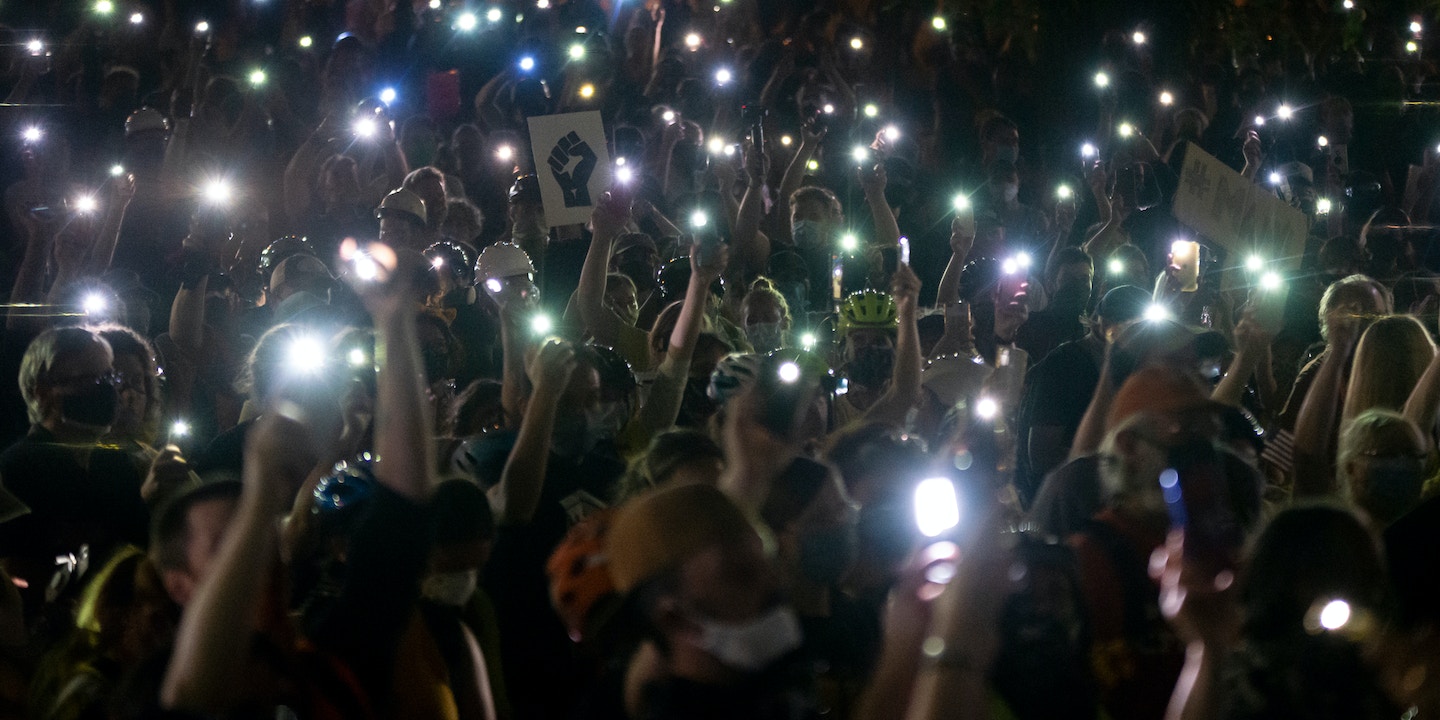 The rogue deployment of secret federal police forces in Portland, Oregon, has added a new complication to negotiations over reauthorizing the Trump administration’s vast surveillance powers and appropriating new money for the Department of Homeland Security. In March, a sweeping set of government authorities to monitor people in the United States expired, and Congress continues to debate what limits should be put on such powers before reauthorizing them. And the House is debating its next DHS funding bill, with the Congressional Progressive Caucus pushing leadership not to bring it up for a vote given Trump’s abuse of power and DHS agents’ role in a Portland arrest.

House Democratic leaders, however, are considering lumping in DHS funding with appropriations for the departments of Labor and Health and Human Services, making it more difficult for progressive Democrats to oppose. Rep. Pramila Jayapal, D-Wash., said that the CPC is urging leadership either to not bring up the bill at all or to break it off from Labor-HHS and allow for a separate vote.

“What you’re seeing is this giant Trump administration machine deputize every arm of government to engage in their agenda at the expense of democracy and the Constitution, so there aren’t traditional boundaries anymore for any of those pieces of legislation,” Jayapal said. “Every argument is about, do you want to give more tools to the Trump administration to destroy our Constitution?”

But the debate over the government’s surveillance power is happening in a shroud of confusion, as lawmakers are unclear precisely what the intelligence community currently considers legal, given the classified nature of the operations. Leaked Republican talking points suggest the intelligence community is pushing for legal blessing of dragnet surveillance, and the ability to use the data caught up in those dragnets — not to buttress existing investigations with a warrant but to begin new ones.

The GOP talking points, first obtained by Gizmodo and passed out by the Senate Judiciary Committee, suggest that investigators could use “Internet data as a starting point” in launching an investigation. That’s a radical departure from what is understood to be legal and would allow the Department of Homeland Security to collect data on, for instance, every person who visited a website sympathetic to protests in Portland, then begin to surveil each of those people, hunting for a crime that could justify an arrest — an arrest that could then be carried out by unidentified federal troops driving unmarked vans.

The talking point most concerning to civil liberties advocates was built around a hypothetical case involving a bomb builder: “Without this other information to build a probable cause case, this amendment hamstrings the Government from pursuing the bomb-builder with the Internet data as a starting point.”

On Tuesday, Sens. Pat Leahy, D-Vt., and Mike Lee, R-Utah, sent a letter to Attorney General William Barr and Director of National Intelligence John Ratcliffe demanding assurance that the government is no longer conducting surveillance under the expired authorities, and asking whether the government believes it has authority to conduct such surveillance absent the legislation. The letter includes a reference to an extra-legal mass data collection project Barr himself authorized within the Drug Enforcement Administration when he was serving as attorney general under President George H.W. Bush.

Because so much of the intelligence activity implicated by the legislation lies behind a veil of classification, lawmakers are left to rewrite the rules by piecing together clues. This leaked point is perhaps the most significant clue that the intelligence services are pursuing the ability to perform warrantless, dragnet searches — or are already doing so. Combined with the Trump administration’s willingness to deploy unmarked federal police forces against the will of state and local authorities, the push for expanded surveillance authority is alarming to civil liberties activists. “Secret surveillance cannot coexist with secret police in a free society. Both are inherently problematic and dangerous, but together the threat is immeasurable. It’s hard to escape that conclusion,” said Sean Vitka, senior policy counsel with the group Demand Progress, which is pushing to narrow the scope of the authorities.

In the Senate, Wyden pushed an amendment, co-sponsored by Sen. Steve Daines, R-Mont., that would bar federal authorities from using a dragnet to collect search and browsing history. The amendment fell one vote short of the 60 needed to advance, but the fight for it isn’t over. Two senators who missed the vote, Patty Murray of Washington and Bernie Sanders of Vermont, have said they’re supportive, and Sen. Tom Carper, D-Del., may also be gettable on a new vote, as he said he voted no on the measure because he was told by Democratic House leaders that the amendment effectively did away with FISA, which is not true.

In any event, a companion amendment was introduced in the House, led by Reps. Zoe Lofgren, D-Calif., and Warren Davidson, R-Ohio. Ahead of a vote in the Judiciary Committee in May, Chair Jerry Nadler abruptly canceled the hearing, amid concerns among backers of the bill that Lofgren may have had the votes to pass her amendments.

House Speaker Nancy Pelosi ordered Schiff and Lofgren to negotiate a way forward, and they reached a short-lived compromise that would bar such dragnet searches “of U.S. persons.” Lofgren told the New York Times that such language barred dragnet searches, as it is impossible to guarantee that such a search won’t gather intelligence on Americans. Based on that interpretation, Wyden endorsed the measure. But then Schiff told the New York Times that he interpreted the language differently, saying that as long as agents didn’t intentionally target Americans, incidental collection was OK. Following Schiff’s statement, Wyden took the unusual step of withdrawing his support. “It is now clear that there is no agreement with the House Intelligence Committee to enact true protections for Americans’ rights against dragnet collection of online activity, which is why I must oppose this amendment, along with the underlying bill, and urge the House to vote on the original Wyden-Daines amendment,” Wyden said.

Critical to understanding the legislation is the definition of a “U.S. person.” The National Security Agency is clear that the term does not apply to all people in the United States, but only to citizens and “an alien lawfully admitted for permanent residence.” Recipients of DACA — the Deferred Action for Childhood Arrivals program — are not considered lawfully admitted, but rather are able to remain in the country with their deportation proceedings indefinitely deferred. Undocumented immigrants, too, would fall outside those protections, but that doesn’t mean they’re the only ones vulnerable. Intelligence agencies, under Schiff’s interpretation of the language, could legally target DACA recipients for warrantless dragnet surveillance, which would then make whatever data they also collected on American citizens the legal result of incidental collection. That secret data could be turned over to secret federal police, who could make arrests from unmarked vehicles.

Instead of resolving the conflict, the House voted to go to a conference committee to negotiate with the Senate, but the Senate has yet to do the same, as reformers believe their leverage increases each day the authorities continue to be expired.

On the funding side, the Congressional Hispanic Caucus is pushing House leadership to vote on the DHS appropriations bill, having secured a reduction in the number of beds available for immigrant detention. But others in the caucus argued that the win is less than it appears, as authorities need fewer beds than before, having successfully deported so many from detention. The internal CHC vote was close and contentious, according to two members of Congress familiar with the drawn out deliberations, meaning that the caucus’ push for a vote is less than unified.

Either way, Congress is nearly certain to pass a continuing resolution to fund the government rather than independent appropriations bills, so the debate over funding is largely symbolic. Jayapal said that approving new money now for DHS is “adding insult to injury for immigrants across the country but also peaceful protesters against white supremacy.”