It’s not a place you’d expect all three candidates for district attorney — including the incumbent — to oppose the expansion of the local jail. But then again, Lawrence isn’t your typical Kansas town.

Earlier this year, county officials announced plans to move forward with a $30 million expansion of the Douglas County jail, flouting the will of voters who had rejected the plan twice before on ballot referendums in 2018. That’s when local criminal defense attorney Cooper Overstreet launched his campaign for DA. He described Lawrence to The Intercept as a “blue speck in a sea of red”: home to just under 100,000 people, along with the University of Kansas. On August 4, voters will effectively elect a Democratic sheriff, district attorney, and county commissioner, as no Republican has filed to run in those races.

The incumbent, Charles Branson, took office in 2005, and while he says there’s “no office in our state that is more progressive than mine,” his office has a history of mishandling cases concerning sexual assault. Suzanne Valdez, a special prosecutor and law professor at the University of Kansas, is also running, arguing that her experience chairing the state Crime Victims Compensation Board and handling high-level felony cases as a special prosecutor give her more applicable experience than either Overstreet or Branson, her former law school classmate.

The city of Lawrence is situated on land originally inhabited by Native Americans, and was established in 1854 by abolitionists who arrived during the Bleeding Kansas period to keep slavery out of the territory. “That sort of history has contributed to it having quite a bit of radical progressive activity sort of built into its DNA, certainly relative to the rest of Kansas,” said Sam Allison-Natale, a former public defender and current private criminal defense attorney volunteering with Overstreet’s campaign. At the same time, reformers in other parts of the state are facing pushback. In Kansas City, reform prosecutor Mark Dupree was recently excluded from a task force on policing, The Intercept reported.

Lawrence’s background — combined with a politically active coalition of older, traditionally conservative, white Christians, prison abolitionists, and local chapters of the Democratic Socialists of America and the Sunrise Movement — has taken the prospect of electing a truly progressive prosecutor for the first time in close to two decades from a long shot to a real possibility.

Justice Matters, an interfaith organization of more than 20 religious congregations in Lawrence, successfully led an effort twice in recent years to stop the expansion of the local jail, winning funding for a behavioral health campus instead. In 2018, Justice Matters organized a successful campaign against the referendum to stop the jail expansion, called “Jail No.” Later that year, during the November general election, the community overwhelmingly passed another ballot proposal securing funding for the behavioral health campus. But officials moved forward anyway. The commission argued that previous votes had rejected the proposed source of funding for the expansion, not the jail itself.

“What they have said, and they have been consistent in saying this, is that the ‘jail no’ vote wasn’t about the jail, it was about the funding mechanism,” said Rev. Joanna Harader, a pastor at the Peace Mennonite Church in Lawrence and an organizer with Justice Matters. “What we’ve been trying to communicate is that the impetus behind that vote was about people not wanting to expand the jail, period,” she said. Even with the commission’s January vote approving the jail expansion, officials have communicated in recent months that plans to move forward are at least temporarily “off the table,” now that jail numbers have decreased amid the pandemic, Harader said.

Overstreet officially announced his run for district attorney on April 4, and said he made the decision to launch his campaign after conversations with local activists and groups who had been working to stop the jail expansion.

Overstreet grew up in Augusta, a rural town outside of Wichita, Kansas, and came to Lawrence in 2006 to attend KU. He says his background in criminal defense is central to his platform, which includes ending cash bail, starting an anti-racism task force in the DA’s office, and bringing a more holistic perspective to charging and sentencing that does not criminalize mental and behavioral health issues. And his base of support has expanded significantly over the last few months as a result of the ongoing pandemic and protests against police brutality, he explained.

“Even here in Kansas, in small towns out in Western Kansas, we’ve seen there being Black Lives Matter rallies,” Overstreet said. “So that has really taken the idea of systemic change in our criminal legal system and put it in the forefront of people’s minds.”

Branson and Valdez point out that, in Kansas, district attorneys cannot unilaterally eliminate cash bail, which is up to judges. But district attorneys have immense power over whether or not to request cash bail in the first place. Branson and Valdez both support only partially restricting cash bail, for use in cases where the defendant is charged with a violent crime or poses a public safety risk.

Overstreet’s campaign is more grassroots than the average run for district attorney. It’s using REACH, a canvassing app geared toward progressive candidates for office, to engage with voters, which has helped them connect with supporters even as in-person campaigning has stopped amid the ongoing Covid-19 pandemic. The local chapter of the Sunrise Movement has been volunteering to phone bank for the Justice Ticket; they endorsed Overstreet in June. The campaign is leveraging connections through local DSA groups, and getting help from volunteers and organizers who’ve worked for candidates like Sen. Bernie Sanders and Rep. Alexandria Ocasio-Cortez, Overstreet said.

Overstreet has raised just under $20,000 so far to Branson’s $23,000 (Branson also has an additional $23,500 cash on hand from last year, prior to his April filing for reelection), enough to send mailers to the entire county more than once. Valdez has raised just under $12,000 and defended the low number, saying she didn’t feel comfortable asking people for money during the ongoing pandemic. The last person to win a competitive race for a county commission seat raised around $7,000. “The numbers just across the board in Douglas County are all really low,” Natale said. “Our win number is looking at maybe 4,000 votes.”

Branson said his office started implementing its own criminal justice reforms four years ago, opening a behavioral health court which received national recognition for reducing the number of people in the local jail with mental health issues. “These programs and improvements were well underway long before I had any primary opponent,” Branson said.

Branson’s office has introduced programs to train staff on trauma-informed investigations, launched an alternative court program, and pretrial release and bond supervision programs as alternatives to cash bail. His office stopped filing simple marijuana charges last year. But he’s also come under fire from his opponents for what they say is a track record of mishandling or neglecting cases of sexual assault. In 2019, Branson’s office charged a young woman who had come forward to report a rape with a felony for falsely reporting a crime. His office dropped those charges, and charges against a woman in another false reporting case, last year. 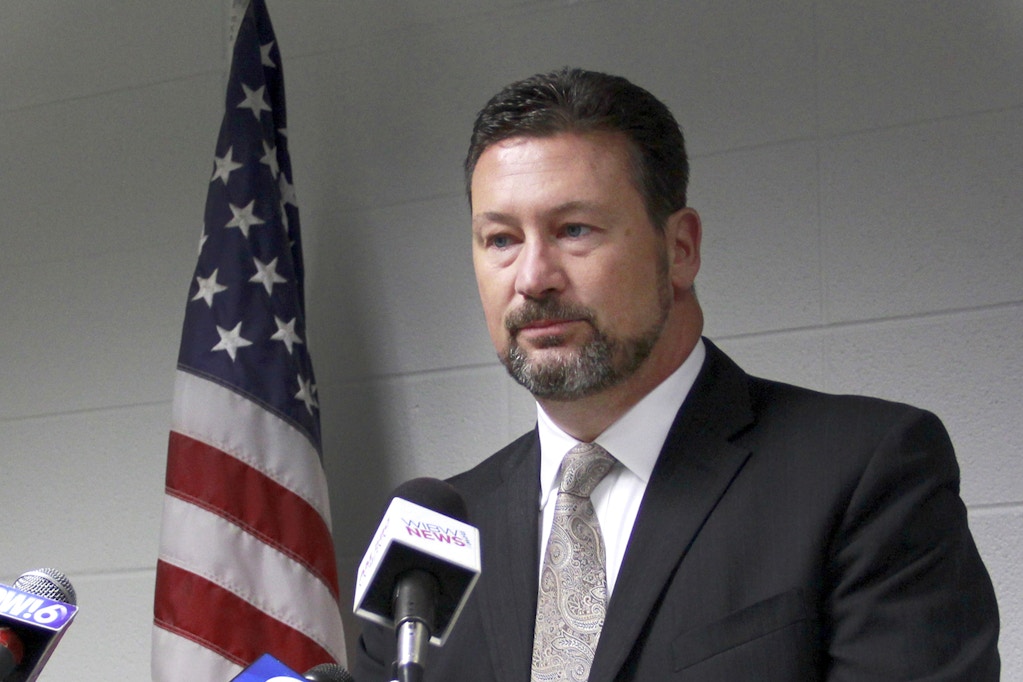 “Sexual assault cases are some of the most difficult cases handled by prosecutors,” Branson told The Intercept. “Having personally tried these cases I know the first thing a juror grapples with is who to believe,” he added. Branson said his prosecutors were “motivated by trying to prevent wrongful convictions of persons wrongfully accused,” and “as well intentioned as that was, we did not fully understand the harm that could be caused to survivors trying to make a decision to report a crime.” The office has since trained all staff on trauma-informed sexual assault investigations and prosecutions, Branson said, and partnered with local law enforcement agencies and survivor services to plan future trainings for the community.

Branson has also said a conviction integrity unit, which prosecutors from Philadelphia to St. Louis to San Francisco have introduced in recent years to help exonerate wrongful convictions, is not a good fit for his office. “For this office, conviction integrity begins the moment a police report is submitted,” he said.

Valdez said she entered the race because of concerns regarding the records of both candidates. Branson “has very, very poor judgment,” she said, referring to the case of Amy McGowan, who retired last October after calls from other prosecutors that she be fired over misconduct in previous offices, including withholding evidence that led to wrongful convictions.

Valdez grew up as a “Bob Dole Republican” in a tight-knit Hispanic community in Arizona, she told The Intercept, and later switched to an independent before re-registering as a Republican in 2014. She registered as a Democrat in January. “I voted for Obama, I voted for the right people,” she said. “If people want to see me as Republican, that’s fine. I’m not going to change people’s minds.”

Valdez has chaired the state crime victims’ compensation board for nine years, and describes her campaign as victim- and survivor-centric, centered on “ethical prosecution,” she said. She’s currently a special prosecutor in Wyandotte County, some 30 miles east of Lawrence, handling high-level felonies including aggravated battery and attempted murder. Valdez also served from 2013 to 2018 on the Douglas County CASA Board, which appoints advocates to represent abused or neglected children in court.

“It’s just a little too late,” she said of Branson’s reforms. “So many survivors have been harmed by Mr. Branson.” Public confidence in Branson’s office, she added, has corroded over time as cases have piled up and trials drag out.

In Overstreet’s case, Valdez thinks he’s a little too radical. “You don’t want this community to be an amnesty community either, where people come and can get away with committing crimes,” Valdez said. “I don’t want it to become a Seattle or a Portland, where there’s just complete anarchy. And I think that’s what you get with the Cooper Overstreet, left-wing, sort of way-left progressiveness.”

She also described Overstreet and his former boss, Sarah Swain, who ran for attorney general in 2018, as “cop haters.”

Overstreet called Valdez’s words “coded.” “That’s used a lot by the Blue Lives Matter crowd to distract from the issues that we have in law enforcement in this country,” Overstreet said. “I think that there’s a very valuable role for protests in our society. And that there are a lot of people that are struggling and feel very angry, and very unheard in our country right now.”