Journalism’s New Propaganda Tool: Using “Confirmed” to Mean Its Opposite

One of the most humiliating journalism debacles of the Trump era played out on December 8, 2017, first on CNN and then on MSNBC. The spectacle kicked off on that Friday morning at 11 a.m. when CNN, deploying its most melodramatic music and graphics designed to convey that a real bombshell was about to be dropped, announced that anonymous sources had provided the network with a smoking gun proving the Trump/Russia conspiracy once and for all: During the 2016 campaign, Donald Trump Jr. had received a September 4 email with a secret encryption key that gave him advanced access to WikiLeaks’ servers containing the DNC emails which the group would subsequently release to the public 10 days later. Cable news and online media spontaneously combusted, as is their wont, in shock, hysteria and awe over this proof that WikiLeaks and Trump were in cahoots.

CNN has ensured that no videos of the festivities are available on YouTube for anyone to watch. That’s because the claim was completely false in its most crucial respect. CNN misreported the date of the smoking gun email Trump Jr. received: Rather than being sent to him on September 4 — 10 days prior to WikiLeaks’ public release, thus enabling secret access — the email was merely sent by a random member of the public after the public release by WikiLeaks (September 14), encouraging Trump Jr. to look at those now-public emails.

Though the original false report cannot be viewed any longer (except in small snippets from other networks, principally Fox, discussing CNN’s debacle), one can view the cringe-inducing video of CNN’s senior congressional correspondent Manu Raju explaining, after the Washington Post debunked the story, that “we are actually correcting” the reporting, doing his best to downplay what a massive blunder this was (though the whole thing is fantastic, my favorite line is when Raju says, with no small amount of understatement, “This appears to change the understanding of this story,” followed by, “Perhaps the initial understanding of what this email was, perhaps is not as significant based on what we know now”):

The CNN page which originally published the blockbuster story contains this rather significant correction at the top:

Washington (CNN) Correction: This story has been corrected to say the date of the email was September 14, 2016, not September 4, 2016. The story also changed the headline and removed a tweet from Donald Trump Jr., who posted a message about WikiLeaks on September 4, 2016.

So mistakes happen in journalism, even huge and embarrassing ones. Other than some petty schadenfreude, why is this worth remembering? The reason is that that sorry episode reflects a now-common but highly corrosive tactic of journalistic deceit.

Very shortly after CNN unveiled its false story, MSNBC’s intelligence community spokesman Ken Dilanian went on air and breathlessly announced that he had obtained independent confirmation that the CNN story was true. In a video segment I cannot recommend highly enough, Dilanian was introduced by an incredibly excited Hallie Jackson — who urged Dilanian to “tell us what we’ve just now learned,” adding, “I know you and some of our colleagues have confirmed some of this information: What’s up?” Dilanian then proceeded to explain what he had learned:

That’s right, Hallie. Two sources with direct knowledge of this are telling us that congressional investigators have obtained an email from a man named “Mike Erickson” — obviously they don’t know if that’s his real name — offering Donald Trump and his son Donald Trump Jr. access to WikiLeaks documents. … It goes to the heart of the collusion question. … One of the big questions is: Did [Trump Jr.] call the FBI? 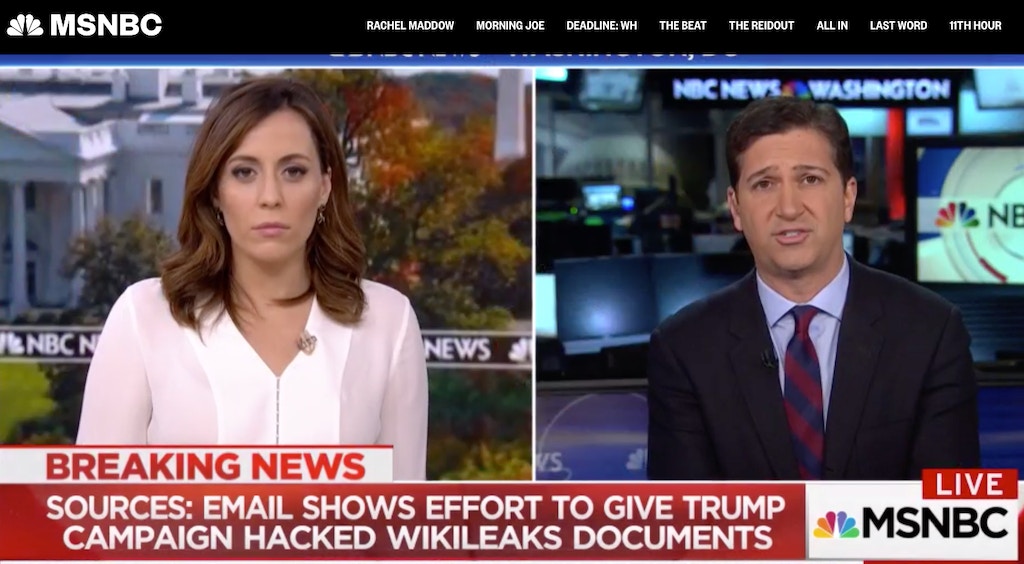 How could that happen? How could MSNBC purport to confirm a false story from CNN? Shortly after, CBS News also purported to have “confirmed” the same false story: that Trump Jr. received advanced access to the WikiLeaks documents. It’s one thing for a news outlet to make a mistake in reporting by, for instance, misreporting the date of an email and thus getting the story completely wrong. But how is it possible that multiple other outlets could “confirm” the same false report?

It’s possible because news outlets have completely distorted the term “confirmation” beyond all recognition. Indeed, they now use it to mean the exact opposite of what it actually means, thereby draping themselves in journalistic glory they have not earned and, worse, deceiving the public into believing that an unproven assertion has, in fact, been proven. With this disinformation method, they are doing the exact opposite of what journalism, at its core, is supposed to do: separate fact from speculation.

With this disinformation method, they are doing the exact opposite of what journalism, at its core, is supposed to do: separate fact from speculation.

CNN ultimately blamed its anonymous sources for this error, but refused to out them by insisting that it was a somehow a good faith mistake rather than deliberate disinformation (how did multiple “good faith” sources all “accidentally misread” an email date in the same way? CNN, in the spirit of news outlets refusing to provide the accountability and transparency for themselves that they demand from others, refuses to this very day to address that question).

But what is clear is that the “confirmation” which both MSNBC and CBS claimed it had obtained for the story was anything but: All that happened was that the same sources which anonymously whispered these unverified, false claims to CNN then went and repeated the same unverified, false claims to other outlets, which then claimed that they “independently confirmed” the story even though they had done nothing of the sort. It seems the same misleading tactic is now driving the supremely dumb but all-consuming news cycle centered on whether President Trump, as first reported by the Atlantic’s editor-in-chief Jeffrey Goldberg, made disparaging comments about The Troops. Goldberg claims that “four people with firsthand knowledge of the discussion that day” — whom the magazine refuses to name because they fear “angry tweets” — told him that Trump made these comments. Trump, as well as former aides who were present that day (including Sarah Huckabee Sanders and John Bolton), deny that the report is accurate.

So we have anonymous sources making claims on one side, and Trump and former aides (including Bolton, now a harsh Trump critic) insisting that the story is inaccurate. Beyond deciding whether or not to believe Goldberg’s story based on what best advances one’s political interests, how can one resolve the factual dispute? If other media outlets could confirm the original claims from Goldberg, that would obviously be a significant advancement of the story.

Other media outlets — including Associated Press and Fox News — now claim that they did exactly that: “confirmed” the Atlantic story. But if one looks at what they actually did, at what this “confirmation” consists of, it is the opposite of what that word would mean, or should mean, in any minimally responsible sense. AP, for instance, merely claims that “a senior Defense Department official with firsthand knowledge of events and a senior U.S. Marine Corps officer who was told about Trump’s comments confirmed some of the remarks to The Associated Press,” while Fox merely said “a former senior Trump administration official who was in France traveling with the president in November 2018 did confirm other details surrounding that trip.”

In other words, all that likely happened is that the same sources who claimed to Jeffrey Goldberg, with no evidence, that Trump said this went to other outlets and repeated the same claims — the same tactic that enabled MSNBC and CBS to claim they had “confirmed” the fundamentally false CNN story about Trump Jr. receiving advanced access to the WikiLeaks archive. Or perhaps it was different sources aligned with those original sources and sharing their agenda who repeated these claims. Given that none of the sources making these claims have the courage to identify themselves, due to their fear of mean tweets, it is impossible to know.

But whatever happened, neither AP nor Fox obtained anything resembling “confirmation.” They just heard the same assertions that Goldberg heard, likely from the same circles if not the same people, and are now abusing the term “confirmation” to mean “unproven assertions” or “unverifiable claims” (indeed, Fox now says that “two sources who were on the trip in question with Trump refuted the main thesis of The Atlantic’s reporting”).

It should go without saying that none of this means that Trump did not utter these remarks or ones similar to them. He has made public statements in the past that are at least in the same universe as the ones reported by the Atlantic, and it is quite believable that he would have said something like this (though the absolute last person who should be trusted with anything, particularly interpreting claims from anonymous sources, is Jeffrey Goldberg, who has risen to one of the most important perches in journalism despite — or, more accurately because of — one of the most disgraceful and damaging records of spreading disinformation in service of the Pentagon and intelligence community’s agenda).

But journalism is not supposed to be grounded in whether something is “believable” or “seems like it could be true.” Its core purpose, the only thing that really makes it matter or have worth, is reporting what is true, or at least what evidence reveals. And that function is completely subverted when news outlets claim that they “confirmed” a previous report when they did nothing more than just talked to the same people who anonymously whispered the same things to them as were whispered to the original outlet.

Quite aside from this specific story about whether Trump loves The Troops, conflating the crucial journalistic concept of “confirmation” with “hearing the same idle gossip” or “unproven assertions” is a huge disservice. It is an instrument of propaganda, not reporting. And its use has repeatedly deceived rather than informed the public. Anyone who doubts that should review how it is that MSNBC and CBS both claimed to have “confirmed” a CNN report which turned out to be ludicrously and laughably false. Clearly, the term “confirmation” has lost its meaning in journalism.