False claims that antifascists are starting forest fires have been spread by supporters of President Donald Trump. Four police departments in parts of Oregon ravaged by wildfires — propelled by high winds across parched land during hot, dry weather in a changing climate — are pleading with the public to stop calling 911 to pass on unfounded rumors that antifascist political activists have intentionally set the blazes.

The false claims have been spread on social networks by supporters of President Donald Trump, who has spent months pretending that antifascists in the Pacific Northwest dedicated to confronting white supremacists are members of an imaginary army of domestic terrorists called Antifa.

Primed by that fear-mongering, the president’s supporters have fallen hard for internet rumors and hoaxes falsely claiming that antifascist arsonists have been caught in the act.

@realDonaldTrump Please help!!!! Southern Oregon on Fire, our Governor is nuts, and the fires that are happening are a terrorist attack by Antifa- this was posted 2 hours ago. The Medford police have 7 in custody. Please have them Federally tried as terrorists.
Please help! pic.twitter.com/d8qF0p5AxN

“Rumors spread just like wildfire and now our 9-1-1 dispatchers and professional staff are being overrun with requests for information and inquiries on an UNTRUE rumor that 6 Antifa members have been arrested for setting fires,” the Douglas County Sheriff’s Office in Roseburg, Oregon wrote on Facebook on Thursday. “THIS IS NOT TRUE! Unfortunately, people are spreading this rumor and it is causing problems.”

One prominent Trump supporter who spread the false information about arrests in Douglas County, and has refused to retract it, is Paul Romero, who finished second in the Oregon Republican primary for the U.S. Senate in May, with more than 100,000 votes.

It seems those individuals who have been setting fires in Oregon...well, six of them are in custody. All are ANTIFA. So does this put all the fake environmentalists, who allowed our forests to become tinder boxes, in direct opposition to the Fascist Marxists of ANTIFA?

The Jackson County Sheriff’s Office in southwestern Oregon was also forced to respond to the spread of rumors on Thursday. “One increasingly problematic issue related to the disastrous fires in Jackson County is the spreading of false information,” the sheriff’s office wrote on Facebook. “We are inundated with questions about things that are FAKE stories. One example is a story circulating that varies about what group is involved as to setting fires and arrests being made. THIS IS NOT TRUE!”

While the authorities in Jackson County have opened an arson investigation into the Almeda Fire, which has caused at least two deaths and destroyed hundreds of homes, Ashland Police Chief Tighe O’Meara told The Oregonian, a Portland newspaper, that there was no evidence of any link to antifascist activists.

“One thing I can say is that the rumor it was set by Antifa is 100 per cent false information,” the police chief wrote in an email. “We have some leads, and none of it points in that direction.”

Rich Tyler, a spokesman for the Oregon fire marshal, told Reuters that it was not yet clear that any of the fires in the state had been deliberately set. “Every fire is investigated for the possibility of arson so that we can either determine it is or rule it out,” he said.

Police officers in the badly hit city of Medford also had to take time away from responding to the crisis to debunk a hoax Facebook post, mocked up to look like it had come from their department, which claimed that they had arrested five arsonists “based on anonymous tips.”

“This is a made up graphic and story,” the department wrote on its real Facebook page next to an image of the fake one. “We did not arrest this person for arson, nor anyone affiliated with Antifa or ‘Proud Boys’ as we’ve heard throughout the day. Also, no confirmed gatherings of Antifa which has also been reported.”

This is a made up graphic and story. We did not arrest this person for arson, nor anyone affiliated with Antifa or...

On Wednesday, police officers in Molalla, a city in Clackamas County which was evacuated on Thursday, asked residents who remained in town to report possible suspicious activity by thieves amid what the department called a spate of “rumors” about looters spreading on Facebook.

The department’s Facebook appeal was then wrongly cited as evidence of “Antifa arsonists” by Katie Daviscourt, a member of the Trump-supporting Turning Point USA. “Multiple sources in Emergency Response have confirmed that the fires along the West Coast are caused by dozens of arsonists,” Daviscourt tweeted above an image of the Molalla Facebook post. “These fires are allegedly linked to Antifa and the Riots.”

After nearly 3,000 people shared Daviscourt’s fever dream, the Molalla police department added a clarification to its post, reading: “This is about possible looters, not antifa or setting of fires. There has been NO antifa in town as of this posting at 02:00 am. Please, folks, stay calm and use common sense.”

On Friday, the Federal Bureau of Investigation also issued a statement calling on the public to stop spreading “Misinformation Related to Wildfires.” The FBI’s Portland office wrote that it too has “been receiving reports that extremists are responsible for setting wildfires in Oregon.”

“With our state and local partners, the FBI has investigated several such reports and found them to be untrue,” the bureau said. “Conspiracy theories and misinformation take valuable resources away local fire and police agencies working around the clock to bring these fires under control.”

Reports that extremists are setting wildfires in Oregon are untrue. Help us stop the spread of misinformation by only sharing information from trusted, official sources. pic.twitter.com/ENc4c3kjep

Even as multiple law enforcement agencies pleaded with the public to stop spreading unfounded rumors, evidence emerged online that a sheriff’s deputy in Clackamas County, just outside Portland, was doing so himself. In a YouTube clip recorded on Thursday the deputy can be heard telling a conservative video blogger that he is “worried about” arsonists “stashing stuff… in preparation” for starting fires.

The deputy was placed on leave pending an investigation into the video, Clackamas County Sheriff Craig Roberts said in a statement on Saturday, one day after his department had urged the public to beware of misinformation spreading online during the emergency.

The deputy, who identified himself as “Mark” in the recording, was not named by the sheriff’s office, but The Oregonian reported that he is Mark Nikolai.

Before that report from the Portland daily, local activists who track police misconduct had already found visual clues in the YouTube clip that seemed to support that identification. The first two letters of the deputy’s last name, “Ni,” can be seen at one stage on camera, and he is seen in profile briefly at the very end of the YouTube clip. A screenshot from a YouTube interview with a Clackamas County Sheriff’s deputy recorded on Thursday.

The deputy’s face can also be seen more clearly in a second video clip recorded minutes later in the same location by the video blogger.

The local activists pointed to a Twitter feed maintained in Nikolai’s name, with a profile photograph that seems to match the appearance of the officer seen on camera. The account is filled with recent tweets expressing strong support for Trump and disgust with Democratic elected officials and protesters. The deputy did not immediately reply to a request to confirm that he maintains the Twitter feed using his name and photograph.

Facebook moved on Saturday to stem the flow of misinformation. “We are removing false claims that the wildfires in Oregon were started by certain groups,” Andy Stone, a Facebook spokesperson, wrote on Twitter. “This is based on confirmation from law enforcement that these rumors are forcing local fire and police agencies to divert resources from fighting the fires and protecting the public.”

As the rumors swirled online, the Kremlin’s Potemkin news channel, Russia Today, added to the confusion by illustrating a report on a request from the police in Portland for protesters not to light bonfires with an image of an entirely unrelated wildfire elsewhere in the state. 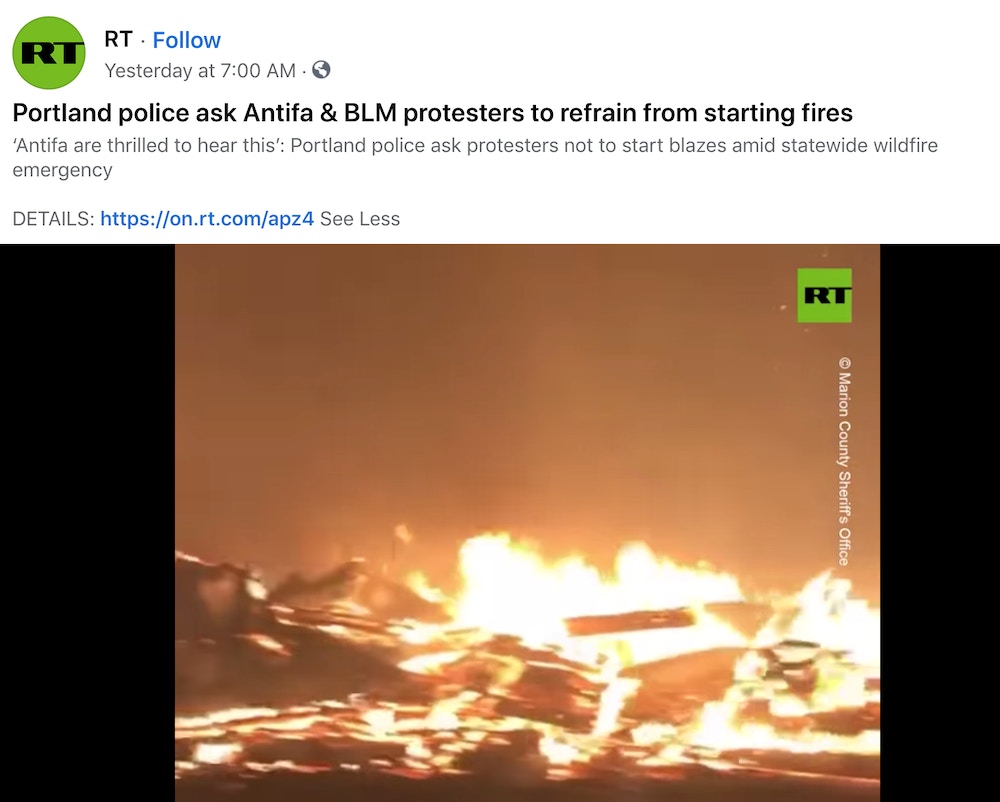 The total lack of evidence for the false claims about left-wing arsonists has not stopped the internet rumors from having an impact in the offline world.

As Christopher Miller and Jane Lytvynenko reported for Buzzfeed News, the paranoia in Molalla led some locals to wrongly identify Gabriel Trumbly, a Portland video journalist and his partner, Jennifer Paulsen, as arsonists while they were filming some of the fires there on Wednesday.

I am officially #AntifaTerrorist. Went out to Molalla, filmed some fires. Locals reported me to the police, and are looking for me to "shoot on sight." Within an hour of this post there were 180 comments, including a desire to "shoot on site" and to deputize locals. pic.twitter.com/UPrxBabPpp

MG Belka, a journalist in Eugene, Oregon, reported on Wednesday that a member of a far-right group providing aid to evacuated families showed him “screenshots from her Facebook account that claim members of ‘Antifa’ are being caught starting fires around the county.” The woman assured Belka that two of the arsonists from a group called “The Ring of Fire” had been arrested. There have been no such arrests.

Three freelance journalists based in Portland — Justin Yau, Sergio Olmos and Alissa Azar – reported on Twitter on Thursday that they were threatened while reporting on the fires at one location in Molalla by armed men on the lookout for antifascist arsonists.

We were approached by an armed group telling us to leave, they are wary of outsiders based on rumors of arsonists starting fires in the area. #OregonFires2020 #OregonFires #oregonwildfires pic.twitter.com/pbUJPC5hKh

I asked this gentlemen if he was threatening us, he said he wasn’t.

Him and another man with a gun told us to “get the fuck out of here” and took a picture of my plates https://t.co/l4L9oOLRl4

Updated: Saturday, September 12, 2020, 3:50 p.m. PDT
This article was updated to report a plea from the FBI, asking the public to stop spreading “untrue” rumors that “extremists are setting wildfires in Oregon,” and video of a sheriff’s deputy in Clackamas County spreading such rumors himself.