Rhode Island’s Progressive Wave Was Four Years in the Making

In 2016, a WFP-backed candidate unseated Rhode Island’s House majority leader. Insurgents have been making progress ever since. 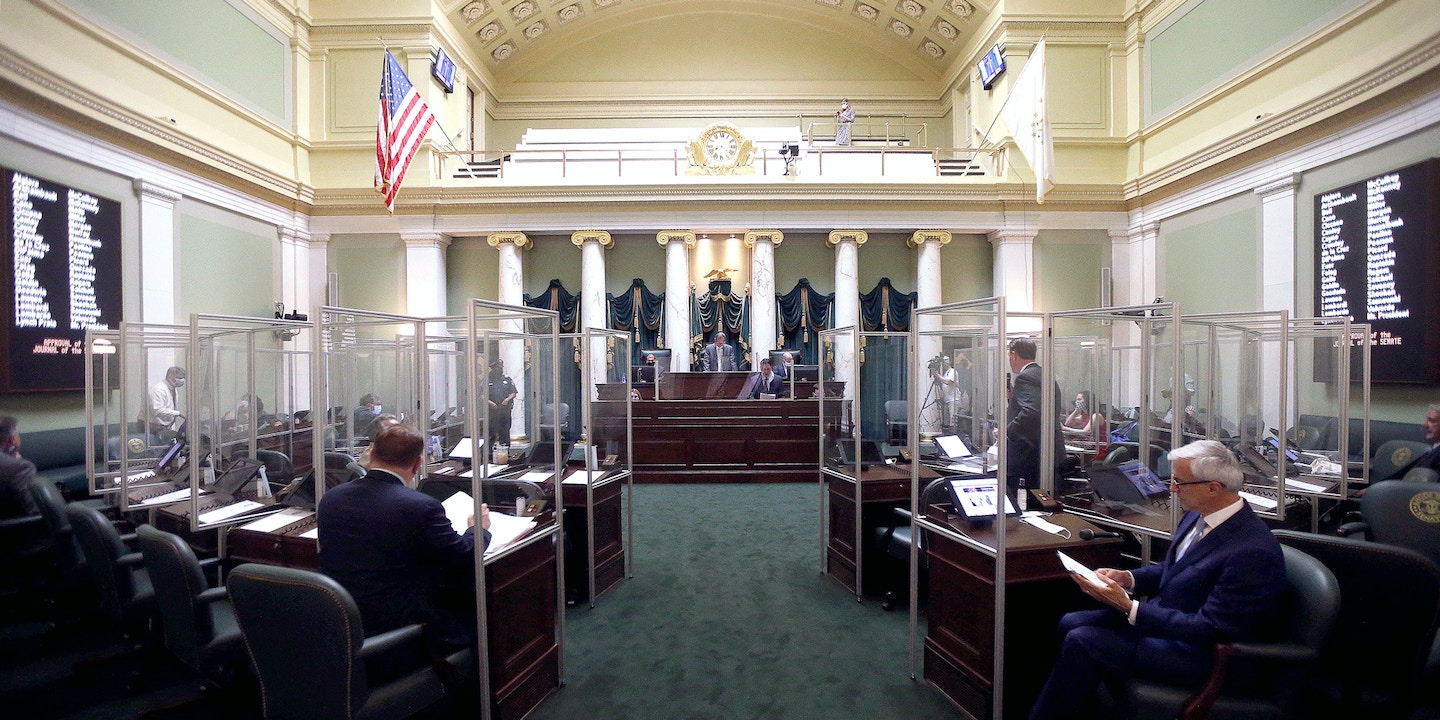 In the summer of 2016, two years before Alexandria Ocasio-Cortez ousted Joe Crowley in New York and kicked off a national insurgency in the Democratic Party, progressives in Rhode Island were organizing one of their own.

With the help of the Working Families Party, which began in New York City but had been slowly expanding to other states, four progressives ousted incumbent Democrats, including state House Majority Leader John DeSimone, a right-wing Democrat typical of the Rhode Island party establishment. A Jamaican-born teacher, Marcia Ranglin-Vassell, beat him by just 21 votes.

Rhode Island’s Democratic Party leadership is famous for its corruption, but also for its grit. DeSimone mounted a write-in campaign in the general election. He fell short there too.

The party establishment has spent the last four years trying to win those seats back, mounting challenges to the 2016 upstarts. This cycle, they found out they had bigger problems, forced to fend off nearly two dozen insurgents challenging establishment politicians. A new organization called the Rhode Island Political Cooperative, founded by veteran Ocean State lefties and built to recruit and provide infrastructure to an entire slate of candidates, fielded 15 candidates for state House and Senate races and teamed up with local Sunrise Movement chapters to run field programs for them. Reclaim Rhode Island, another new group made up of former Bernie Sanders organizers, endorsed an additional four candidates, and one of those campaigns was run by the local chapter of the Democratic Socialists of America. The Working Families Party also continued its push, endorsing 11 people for office, eight of whom were also backed by Reclaim, the cooperative, or DSA. Of those 22 candidates, a startling 15 won their September 8 primaries in either the House or Senate, including wins against the Senate president pro tempore and the Senate Finance Committee chair.

The most unusual intervention in the primary, from the Rhode Island Political Cooperative, endorsed candidates all the way down to the town council level. Typically, organizations vet candidates for endorsements, and then support their candidacies as much as makes sense and is doable. But the political cooperative not only recruited the candidates but effectively ran their campaigns, providing them with access to data, which is crucial for a campaign, as well as strategic and staff guidance, also critical for first-time, mostly working-class candidates. The cooperative relied heavily on help from local chapters of Sunrise, the youth-led climate movement that is a growing electoral force. Two Sunrise hubs in Providence and South County played a critical role, with more than 10 full-time organizers dedicated to the operation, which generated thousands of volunteer voter contacts.

“We had built this incredible organizing infrastructure, incredible leadership, with an incredible volunteer base. And we didn’t want it to go to waste.”

Progressives owed much of their success to the organizing groups that had sprung up over the last few years, much of it flowing from Sanders’s 2016 presidential campaign. Yet despite the work Rhode Island volunteers did for Sanders’s victorious New Hampshire campaign this year, the Vermont senator rebuffed efforts to win an endorsement for Rhode Island candidates running in his mold, sources involved in the attempt said. A Sanders spokesperson declined to comment.

Daniel Denvir, host of the podcast “The Dig” and a writer for Jacobin magazine, co-founded Reclaim Rhode Island after writing an essay in the magazine encouraging Sanders not to let the organizing capacity he built fester. “We did such hard work here in Rhode Island [for Sanders,] sending bus after bus to New Hampshire to canvass there, car caravans every weekend, then the same in southeast Massachusetts. We had two huge rallies that we organized on our own with very little help from the national campaign,” Denvir said during an interview for the Intercept podcast Deconstructed. “We had built this incredible organizing infrastructure, incredible leadership, with an incredible volunteer base. And we didn’t want it to go to waste. And what I was hoping that the Bernie campaign would do nationally … is try to help facilitate the infrastructure that all of us had put so much sweat and so much time into building, to not let it go to waste and to build successor organizations. And that didn’t happen.”

In addition to the progressive infrastructure that powered their wins, the insurgents had another advantage: The numbers needed to win these local races, often low-turnout affairs, are surprisingly small. Cynthia Mendes, for instance, a health care worker and single mom was outspent several times over by Senate Finance Chair William Conley Jr., yet blew him out 62 percent to 38 — but her total haul of votes was just 1,727. Brianna Henries, a theater teacher in East Providence, similarly bested her incumbent opponent 62-39 for a House seat with just 727 votes.

One of the biggest upsets was pulled off by Leonela Felix, who won a House seat in the heavily white working class city of Pawtucket, showing that with the right message and enough work, a progressive woman who grew up in the Dominican Republic can win the votes of people who don’t look like her. Felix had long been active with the Working Families Party, which coaxed her to run this year. Her race was the top priority of Reclaim Rhode Island, which launched its largest canvassing operation for her. She knocked on plenty of doors herself; by the end of the campaign, her watch tallied more than 370 miles of walking the district’s blocks.

“The budget will go under some deep scrutiny, and there will be a major shift going forward.”

The new progressives aren’t waiting until they enter office next year — as they’re virtually assured to do — but are working immediately to address the most pressing political problem confronting Rhode Island lawmakers: their state’s budget shortfall and its implications for taxing and spending policies. The progressive slate has argued for raising taxes on millionaires, while the Democratic governor and much of the party leadership has pushed instead for social spending cuts.

The wins this week give a boost to, and also complicate, the effort to push back against the governor’s austerity drive. A measure to add a new tax bracket to the code that would kick in at $1 million per year is being led in the House by Rep. Karen Alzate, also of Pawtucket, who was backed by the WFP in a 2018 bid that flipped her district progressive. But in the Senate, the bill was being carried by Conley, who was defeated in the primary by the co-op’s Mendes. Conley was far from a leftist champion but was arguably progressives’ closest ally in the party leadership — an admittedly low bar — and WFP and Reclaim Rhode Island refrained from backing Mendes.

“His proposing of the taxing of the top 1 percent came on after I announced my candidacy. And so it was convenient, the timing,” Mendes said in an interview for Deconstructed.

To pass a budget in Rhode Island, you need a two-thirds vote in both chambers, which means that just a handful of lawmakers can block any given proposal. An effort to organize such a bloc is underway, led by Reclaim and other progressive groups, is already starting to flex its new muscles, threatening to block a budget that includes cuts to funding for schools, health care, cities, or other key services. A press conference with old and new lawmakers is being planned for later this month, said David Segal, a Reclaim member and the co-founder of RI WFP.

“This budget fight is one of the most critical legislative efforts since I first moved to Rhode Island a couple decades ago,” he said. “And we need progressives and other populists in the Assembly, old and new, to come together to wield their procedural power to block a budget that hurts ordinary Rhode Islanders in the middle of this pandemic and economic catastrophe.”

Mendes said she looked forward to being part of that bloc. “The beautiful thing about running with a slate of candidates [is] we all have eyes on that budget in new and unique ways. And another way is that we are not bought by the political establishment. We are not bought by corporate PACs. We’re able to look at that budget with the people that we’ve talked to for months in mind,” she said. “The budget will go under some deep scrutiny, and there will be a major shift going forward.”

This article originally reported that the Rhode Island Political Cooperative fielded 14 state House and Senate candidates. In fact, they fielded 15.