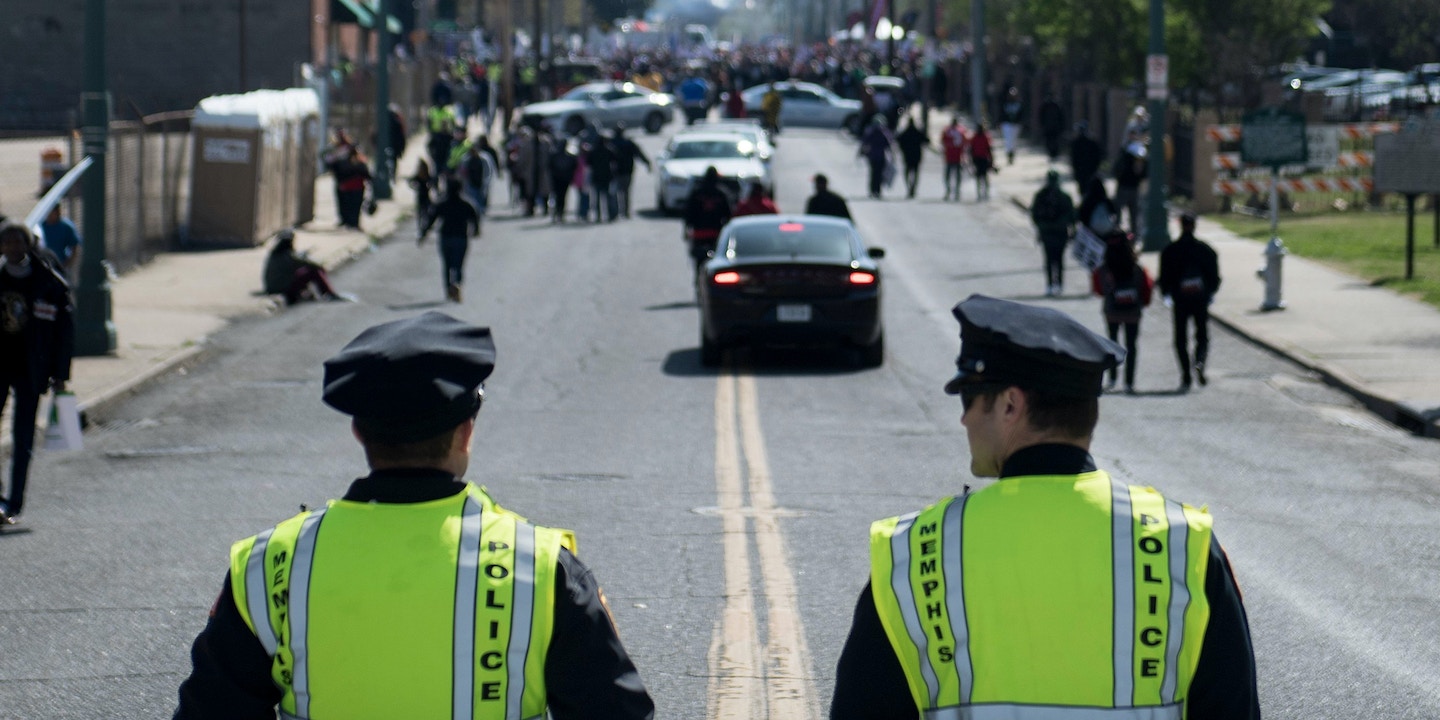 In August, 40 federal agents arrived in Memphis. Some were already on the ground by the time U.S. Attorney Michael Dunavant announced the onset of Operation Legend and the city became, along with St. Louis, the seventh to be targeted by the Justice Department’s heavy-handed initiative to reduce violent crime. Many of the agents are on temporary assignment, working in collaboration with police; nearly half will relocate by November. But they will leave behind a city flush with grant money for local police — and heightened surveillance capabilities.

In Memphis, organizers have long battled police surveillance. The fight came to a head in 2017, when a lawsuit against the city of Memphis revealed years of close surveillance of Black Lives Matter activists and union organizers. “We knew we were being watched and monitored and surveilled,” said Hunter Demster, an activist who was tracked on social media by MPD. The suit was successful, and in 2018, a federal judge ordered an independent monitor to oversee policing in the city. Now, activists there say that Operation Legend is a serious blow.

Operation Legend and its December precursor, Operation Relentless Pursuit, are both funding surveillance technology in cities across the country. Through Operation Legend, Memphis and four other cities received grants for gunshot detection technology, which lines cities with sensors to detect gunfire, despite longstanding concerns about its efficacy. Other more opaque grants from the Justice Department, like a $1.4 million grant to Shelby County, which surrounds Memphis, in April and a $1 million grant in July to the city of Cleveland, are to be used in part for “technological solutions” or “support” for investigations.

Awash in these federal funds, cities have doubled down on their surveillance investments, even as they face general budget shortfalls in the tens of millions. On August 4, two days before Operation Legend was formally announced in the city, Memphis signed a new contract with Cellebrite, an Israeli forensics manufacturer popular with law enforcement, whose products can hack and extract data from smartphones. The estimated $65,000 contract would double previous annual spending on the technology, per city procurement records. The Memphis police declined an interview request for this story and did not respond to several additional inquiries about the purchases.

Through Operation Legend, Memphis and four other cities received grants for gunshot detection technology, despite longstanding concerns about its efficacy.

On August 12, the city of Detroit — another of the nine cities targeted by Operation Legend — also placed a $100,000 order with Cellebrite to acquire the company’s “premium” software package and, two weeks later, renewed an older Cellebrite license for another $22,000 — more than tripling 2018 and 2019 expenditures.

Chicago, meanwhile, announced on August 14 that it would employ “enhanced” technology for “around-the-clock” monitoring of social media to identify looters. One hundred federal agents from the FBI, the Drug Enforcement Administration, and the Bureau of Alcohol, Tobacco, Firearms, and Explosives were sent to Chicago through Operation Legend in late July. Though Mayor Lori Lightfoot at first assumed a hostile attitude toward the initiative, in August she also announced a new task force on looting in partnership with the FBI. “This Task Force is already reviewing video camera footage and other evidence to identify perpetrators and develop strong cases against them,” she wrote.

Just the presence of federal agents can undermine longstanding efforts for accountability on police surveillance. In Memphis, a unique consent decree from 1978 prohibits law enforcement from engaging in “political intelligence” — collecting information on individuals for political purposes. This decree was the backbone of the 2018 American Civil Liberties Union lawsuit, which held that Memphis had violated the law. City law enforcement has lobbied to amend and strike the decree, but so far, it has held.

Yet the Memphis law does not apply to federal law enforcement. “That’s the harsh truth. The decree only covers the city,” explained Tom Castelli, legal director for the ACLU of Tennessee, though per the decree, the city cannot collaborate on unlawful surveillance with outside agencies.

Still, Memphis Police Director Michael Rallings has alluded to partnering with the FBI to get around some of the decree’s restrictions, later confirming through a city spokesperson that he “told [federal officials] that we are restricted by the consent decree and depend on them to catch threats articulated on social media.”

As U.S. Attorney for the Southern District of Indiana Josh Minkler said, as he announced Operation Legend’s expansion to Indianapolis, federal agencies contribute “not just manpower, but technology that can help identify and arrest the individuals. And then they have access to federal courts.”

For Joia Thornton, an organizer with Decarcerate Memphis, a group that formed in response to Operation Relentless Pursuit, the initiatives form part of a longer legacy of federal support for policing.  “We believe this mirrors the three-strikes laws, the war on drugs — all of these types of tactics to drive up mass incarceration,” she told The Intercept. “We are on the front lines to resist that.”

Indeed, U.S. Attorney General William Barr has frequently defended Operation Legend by noting that it is a continuation of federal policing efforts, rather than a radical departure from the norm. These are “traditional crime-fighting activities” he told reporters in Detroit — just now “ratcheted-up.” Attorney General William Barr talks to the media during a news conference about Operation Legend, a federal task force formed to fight violent crime in several cities, on Aug. 19, 2020, in Kansas City, Mo.

The Department of Defense’s 1033 program is perhaps the best-known example of federal investment in policing. In 2014, footage of military vehicles rolling down the streets of Ferguson drew national outcry, bringing scrutiny to the program. 1033 continues provide bayonets, grenade launchers, and other leftovers from U.S. wars overseas to police precincts across the country.

But the Homeland Security and Justice departments also fund law enforcement to the tune of hundreds of millions of dollars a year. The DOJ’s Edward Byrne Memorial Justice Assistance Grant Program, which emerged in the post-9/11 era of rapidly inflated federal spending on policing, is one of the major grant programs for police and has been criticized for, in effect, funding mass imprisonment. Its grants also fund sophisticated policing technology.

Memphis is a prime example: Over the last decade, the city’s license plate reader system, its “real-time crime center” — which houses a “video wall” of live surveillance camera feeds — and its gunshot recognition cameras were all funded, at least in part, through Byrne JAG grants.

Years of federal investment in surveillance have resulted in what Faiza Patel, co-director of the Brennan Center’s Liberty and National Security Program, calls a “layering” effect: “These things don’t come all at once. They build up,” she said. “And when you start feeding one surveillance technology after another into a database, you give police departments the ability to track what people are doing very closely.”

Technologies popular with federal agencies tend to make their way down to the local level. Take, for example, the new popularity of phone-hacking technology with police: The technology was first picked up more than a decade ago by federal agencies like Immigration and Customs Enforcement and the FBI. Now, a growing number of cities and state law enforcement have access to some kind of mobile data extraction software. “You’ve got cops and cruisers using it. The tools always trickle down,” a forensic scientist told Motherboard in 2016.

Yet the federal government, for years, has funded phone-hacking tools directly. The Bureau of Justice Assistance, which has offered generous grants to Memphis, Detroit, and other cities through Operation Legend this summer, has previously funded Cellebrite products for police departments in Florida, Maryland, Kansas, and Idaho. It has also funded artificial intelligence-based data repositories, predictive analytics, and social media monitoring tools.

“Much of this equipment and technology is given under the guise of either narcotics, policing, or counterterrorism. Ultimately, a lot of it gets used to monitor protests.”

In turn, the grants have created an industry of policing technology dependent on federal funding. ShotSpotter, the largest gunshot detection provider in the country and a major beneficiary of Operation Legend, illustrates this well. The company has spent nearly $2 million lobbying legislators over the past decade, according to records from the Center for Responsive Politics — most recently, on a bill that would permit the attorney general to dole out grants for gunshot detection tech.

That legislation remains stalled in the House, but for ShotSpotter, Operation Legend proved a windfall. Five cities — Memphis, Cleveland, Albuquerque, Milwaukee, and Detroit — will receive grants to purchase or expand their gunshot detection through the program. Milwaukee already has a ShotSpotter system in place, and Detroit now plans to deploy it again, after piloting the technology in 2014.

Yet there is little evidence that ShotSpotter reduces gun crime. A study published this year on ShotSpotter in St. Louis found that the system, whose microphones detect and alert police to gunshots, had no impact on violent crime whatsoever: “The results were, essentially, it doesn’t work,” said Dennis Mare, a professor at Southern Illinois University Edwardsville who co-authored the study, though he admitted that it is difficult to extrapolate the results to all cities. Why, then, is St. Louis still receiving federal grants to expand the technology? The company points to other investigative benefits overlooked by the study. “ShotSpotter spends a lot of money,” was Mares’s answer.

ShotSpotter does, however, increase police presence in the neighborhoods where it is used — “disproportionately in minority neighborhoods,” according to Mares. In response, a company representative told The Intercept that the system’s placement is “not based on who’s living in the community. It’s based on, ‘where are the shootings?’” Still, for Matthew Guariglia, a policy analyst at the Electronic Frontier Foundation, that has serious consequences.

“This is yet another surveillance technology that has the potential to victimize people based on their proximity to crime and overpolicing,” he said.  “If you live in a neighborhood that has a gun violence problem, not only are you subjected to that, you are also subjected to the surveillance regime that comes along with it.”

As cries to “defund the police” resound in the streets and cities fly surveillance planes low over demonstrations, Operation Legend is the latest reminder of the magnitude, and consequence, of federal police spending. Advocates have long called for federal grant funding reform, with some results, but the government has continued to grow its police budget; just two Department of Justice grant programs, Byrne JAG and the Community Oriented Policing Services program, give out about a collective $750 million annually to law enforcement.

“Much of this equipment and technology is given under the guise of either narcotics, policing, or counterterrorism,” Guariglia said. “And, ultimately, a lot of it gets used to monitor protests.”