Trump administration officials love to call out liberal Hollywood’s fraught relationship to China. In July, Secretary of State Mike Pompeo railed against censorship driven by China in a dark speech at the Richard Nixon Presidential Library and Museum in Yorba Linda, California. “Hollywood, not too far from here — the epicenter of American creative freedom, and self-appointed arbiters of social justice — self-censors even the most mildly unfavorable reference to China,” Pompeo said. That same month, Attorney General Bill Barr lanced Hollywood for “kowtowing” to the Chinese Communist Party. Barr singled out Disney for scrutiny; the company is now in the hot seat for shooting parts of the live-action remake “Mulan” in northwest China, where over 1 million members of the Uyghur minority group have been detained in camps. Even Donald Trump Jr. has weighed in on the topic, tweeting last year about the removal of the Taiwanese flag from a leather jacket worn by Tom Cruise in the trailer for “Top Gun: Maverick.”

On September 9, as the controversy over “Mulan” intensified, Trump cheerleader Josh Hawley, the junior senator from Missouri, sent a letter to Disney CEO Bob Chapek lambasting him for “Disney’s whitewashing of the ongoing Uighur genocide” and asking him to pull “Mulan” from the streaming service Disney+. 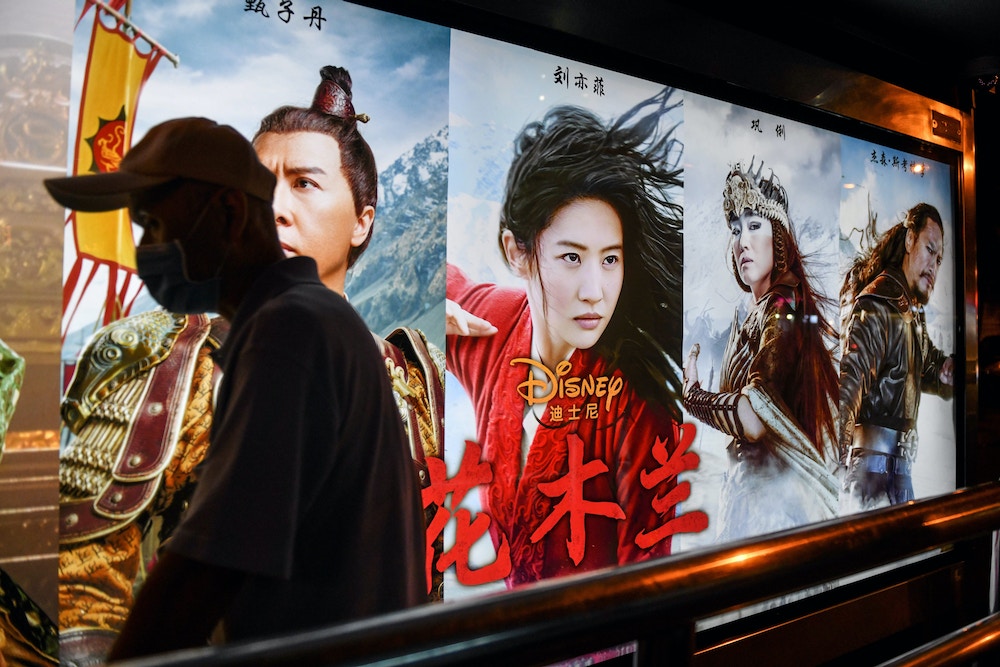 But one prominent Trump administration official has stayed silent: Treasury Secretary Steven Mnuchin. That may be because in his previous role as an investment banker and Hollywood producer, Mnuchin financed several films that altered content or pandered to Chinese government narratives with the apparent aim of breaking into the Chinese market. Mnuchin was also involved in a number of Hollywood-Chinese co-productions, which involve Chinese government regulators from start to finish.

For executives in Hollywood, as in the NBA, the allure of the Chinese market outweighs ideals of free speech and artistic freedom. Over the past few decades, standards of living have increased dramatically for the country’s 1.4 billion potential ticket-buyers, leaving many with disposable income to spend at the box office. Following a construction boom that yielded cineplexes throughout China, Chinese box offices grossed $9.3 billion in 2019, close to the $11.3 billion pulled in by U.S. box offices, according to the Asia-focused film consultancy Artisan Gateway.

The sheer size of the Chinese market leads studios to directly consult Chinese government propagandists, cut unpalatable scenes, and even structure entire productions around unwritten censorship restrictions. “It’s pretty accepted practice that people are having conversations in the halls of power in Los Angeles about what can and cannot be put into a film, based on its potential release in China,” said Jonathan Landreth, a former Beijing-based correspondent for the Hollywood Reporter.

Take “Gravity,” the 2013 blockbuster financed in part by Dune Entertainment, the production company that Mnuchin founded in 2005. (The year of the film’s release, Dune merged with RatPac Entertainment to form RatPac-Dune. Mnuchin divested from the company in 2017.) Sandra Bullock plays Ryan Stone, a stranded astronaut whose fellow crew members have all died. Stone’s own prospects look bleak — until, from a failing spacecraft, she spots the Chinese space station that marks her salvation.

“You’re losing altitude, Tiangong,” Stone says in the film’s climax. “You keep dropping, and you’re going to kiss the atmosphere. But not without me — because you’re my last ride.” The astronaut ejects herself and improbably uses a fire extinguisher to propel toward the Chinese space station. Once on board, she enters the Shenzhou spacecraft, undocking it from the Tiangong just before the station enters the Earth’s upper atmosphere. The Shenzhou lands in a lake. Saved by Chinese technology, Stone swims to safety.

Director Alfonso Cuarón told China Daily that the plotline was driven not by marketing concerns but by the small number of countries that had active space programs. “We had to base it upon elements in space at the time,” he said.

“That may very well be true,” said Aynne Kokas, an associate professor of media studies at the University of Virginia and the author of “Hollywood Made in China.” But she notes that the notion of China as a benevolent space power is a narrative that resonates with the Chinese Communist Party. While China did have a space module called the Tiangong-1 in orbit when “Gravity” was made, it was fairly basic, unlike the sophisticated space station shown in the film. A 2015 report by the U.S. Congress’s U.S.-China Economic and Security Review Commission singled out the production for incorporating Chinese soft power narratives. “Gravity” grossed over $70 million in China, about 10 percent of what it took in worldwide.

“Portraying China as a leader in scientific endeavors is obviously something that is consistent with the CCP’s vision of itself as becoming ever more influential and powerful as a global leader,” said James Tager, deputy director of free expression research and policy for PEN America and the author of a recent report on Hollywood and censorship. The report cites “Gravity” as one of several recent films to “predicate their happy endings on Chinese forces coming to the rescue.”

Ascendant Chinese technology also figures in the 2010 Mnuchin-funded drama “Wall Street: Money Never Sleeps,” also known as “Wall Street 2.” The film features a cameo by Chinese mogul Zhang Xin, co-founder and CEO of the SOHO China property empire. Zhang plays one of several wealthy Chinese investors who are pitched by a Wall Street firm on an investment in a thin-film solar panel company. Zhang’s character watches as her colleague dismisses the idea, explaining how the Chinese solar market has exploded and suggesting that companies there are ahead of their U.S. competitors. (In reality, while China’s renewables industry boasts some homegrown achievements, it has also advanced through industrial espionage and strategic acquisitions of U.S. companies.)

Such cameos can help Hollywood studios appeal to broader global audiences — a worthy goal in an industry known for whitewashing — but they can also curry favor with Chinese regulators. At the time of the release of “Wall Street 2,” the Chinese government imposed a quota on the number of foreign films that could be released in China. Typically only Hollywood blockbusters were allowed in, but “Wall Street 2” was given a slot, despite being a slow-paced drama.

One 2012 film co-financed by Dune openly censored content. “The Life of Pi” tweaked a line about religion to appease Chinese censors, as director Ang Lee told the New York Times. But editing out offensive dialogue after the fact is clunky and expensive. Increasingly, as the Chinese market is flooded with sophisticated domestic films, Hollywood studios enter into co-productions with Chinese companies in which censorship is streamlined throughout the process. “In co-productions, there is oversight from development all the way through release, so Chinese regulators get final cut approval,” said Kokas.

One such film is “Wonder Woman,” a RatPac-Dune production on which Mnuchin is listed as executive producer. On the Chinese side, “Wonder Woman” counted among its financiers the tech giant Tencent (now the target of a recent Trump executive order, which would ban the super app WeChat).

“This should be an issue that is viewed not through the U.S.-China rivalry, but through the lens of defending artistic freedom from government pressure anywhere.”

Within the Trump administration, Mnuchin is known as soft on China and a counterweight to hawks like trade adviser Peter Navarro. But as the administration has struck an adversarial tone, Mnuchin has followed suit. He was one of the lead negotiators in Trump’s trade war, and he warned in June that the U.S. and Chinese economies are on the brink of decoupling. Under his leadership, the Treasury Department recently sanctioned Hong Kong officials close to Beijing, as well as two Xinjiang government officials complicit in the oppression of Uyghurs.

But Mnuchin has not said anything about Hollywood and China.

To be sure, his fellow Cabinet members are disingenuous on the subject. Barr’s solution to China-inspired censorship is apparently to turn Hollywood into a U.S. government mouthpiece, as the Trump administration has done with journalism outfits funded by government money. In his speech on censorship, Barr spoke longingly of Disney’s role making pro-U.S. government work during World War II, which included churning out propaganda films as well as designing insignia for American military equipment “to boost the morale of America’s troops.” Barr’s speech painted China as a cartoonish villain, and he seemed to imply that Hollywood should do the same, much in the way that Trump has encouraged anti-Asian sentiment.

Fighting censorship with more censorship is hardly the answer. “At the end of the day, this should be an issue that is viewed not through the U.S.-China rivalry, but through the lens of defending artistic freedom from government pressure anywhere,” said Tager. But for officials like Mnuchin with strong ties to the film industry, artistic freedom is apparently not the goal. As the protagonist in “Wall Street 2” puts it, “Idealism kills every deal.”