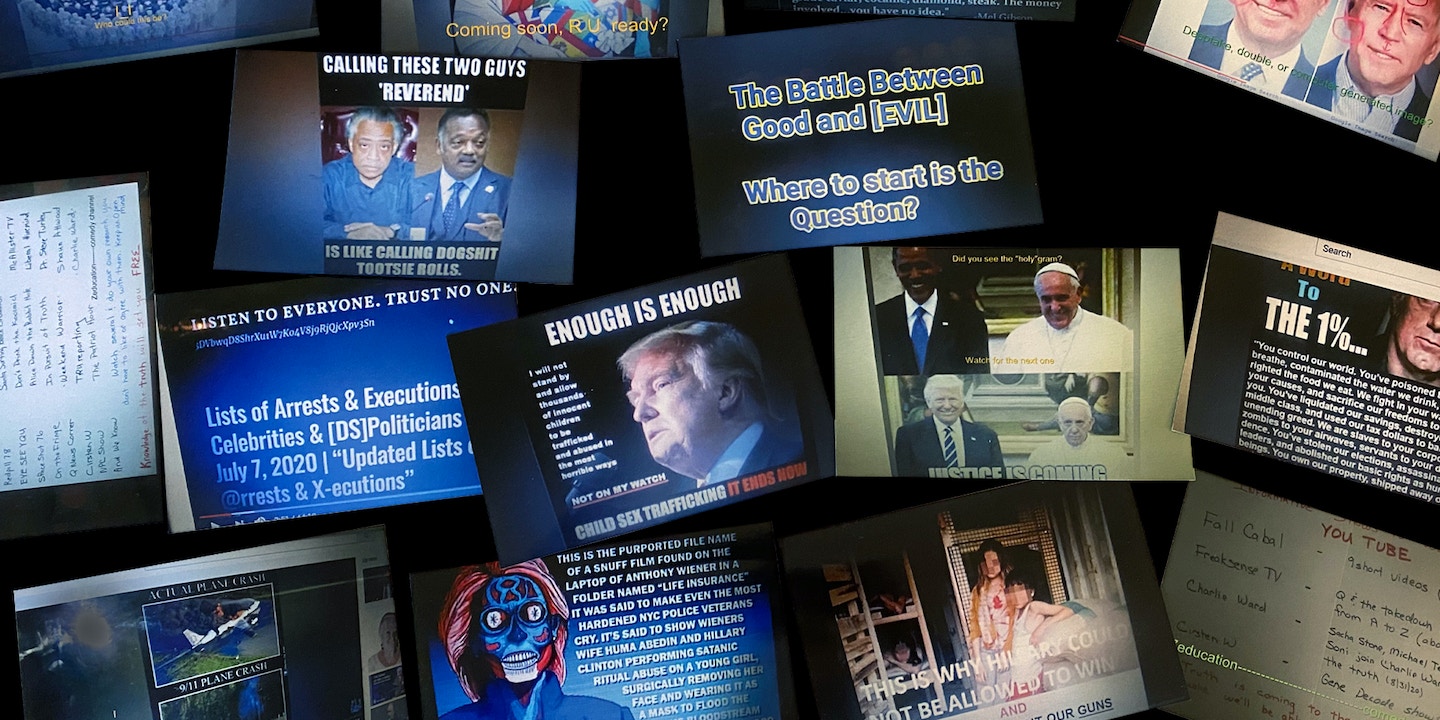 Around lunchtime on Monday, Minnesota resident Luke Healy found a surprise waiting in his mailbox. Along with bills and junk mail was an envelope addressed to “Resident Neighbor.” Inside were 15 glossy prints depicting memes popularized by supporters of the QAnon conspiracy theory, which holds that a government agent called “Q” dribbles clues about the global elites at the center of a diabolical pedophile ring. One image referenced Adrenochrome, a drug that adherents believe establishment politicians and Hollywood celebrities harvest from the blood of children. Another was a handwritten list of conspiracy-driven YouTube channels, including X22 Report and Alice Down the Rabbit Hole.

“The Battle Between Good and [EVIL],” read a third image. “Where to start is the Question?”

Healy started with Nextdoor, the social networking app for neighborhoods. In a post titled “Creepy photos in the mail,” he noted the expense involved in the apparent prank. The photos were printed on premium digital paper, and the envelope bore three stamps. “At least they’re supporting the USPS,” he joked.

But the sender’s style was confounding. Instead of using well-framed screenshots, the person had printed images that looked like they were hastily photographed from a computer screen. In one instance, the screen was shot at an odd angle. In others, the red video progress bar appeared at the bottom of the frame, as if the sender had snapped the photos on a phone while watching YouTube, then dashed off to CVS to print them up. Adherents of QAnon often pride themselves on being “digital soldiers,” but here was the internet crossing over into snail mail.

When I opened Nextdoor that night, Healy’s post was trending. Four households in his corner of St. Louis Park, a first-ring suburb of Minneapolis, had received similar packets of photos. So had a Papa John’s and a liquor store. And miles away in Plymouth, another Minneapolis suburb, at least three people had received similar batches of photos. Many of the photos received by Healy’s neighbors were identical. In Plymouth, one woman got a different batch of pro-QAnon photos. It all suggested a time-consuming and pricey, if not well-executed, effort on behalf of a conspiracy theory that is rapidly gaining traction in the U.S. political landscape – especially in the suburbs. Top/Left: Packets of photos depicting memes popularized by supporters of the QAnon conspiracy theory. Bottom/Right: An envelope, which has the sender name appeared to read “MGM.” Photos: Courtesy of Luke Healy

It has been a weird summer everywhere, but it’s been a particularly weird one in Minneapolis. The murder of George Floyd turned the floodlights on entrenched racism in the city, inspiring protests around the world. But amid the discussion of defunding the police that followed, officers went on an unofficial strike, after kicking hundreds of homeless out of a downtown hotel where they had started sheltering during the protests. Many city parks now hold encampments, and violent crime is up. So are conspiracy theories on both social media and in political life.

Minnesota has six GOP state legislature candidates on the ballot in November who have supported QAnon – including one in Healy’s district. Until recently Melissa Moore, a Republican running for the state House seat in the district, maintained a Twitter account where she described herself as a #DigitalSoldier. She recently told the Associated Press that QAnon is “an exciting movement that opens our minds to different possibilities of what’s going on, of what’s really happening in our world today.”

After connecting on Nextdoor, Healy and the other recipients compared notes. The envelopes listed fake return addresses penned in a similar handwritten script. One read “777 1st Avenue” in St. Paul, Minnesota, another “777 Freedom” in St Louis, Missouri. On all of the envelopes, the sender name appeared to read “MGM” – perhaps a jokey reference to Hollywood, which QAnon adherents believe is at the center of the pedophile ring. Some people received anti-Black Lives Matter memes, like an image of Jesse Jackson and Al Sharpton that read, “CALLING THESE TWO GUYS ‘REVEREND’ IS LIKE CALLING DOGSHIT TOOTSIE ROLLS.” Other images referenced pandemic-related conspiracy theories.

Jared Holt, an investigative reporter at Right Wing Watch who tracks QAnon, examined the images for The Intercept. He was struck by the list of YouTube channels. “It contains some popular QAnon channels — Praying Medic, TruReporting — alongside some totally obscure ones,” he said. “This indicates to me that whoever sent this envelope is incredibly deep into the conspiracy theory and a true believer.”

“It’s hard to understand what the sender hoped to accomplish, but it’s clear that whoever is sending the mail is severely escalating in their radicalization,” he added.

The various recipients are now searching for answers. Some of them initially assumed that they were targeted because they had progressive or Black Lives Matter signs in their yards. But adjacent neighbors with similar lawn signs had not received anything at the time of publication.

In Plymouth, Carrie Kehnle called the FBI, which has identified QAnon as a potential domestic terrorist threat. She said that someone at the Minneapolis field office took down her information and told her to call back if she felt directly threatened.

“The level of vitriol and hate that comes through in these images is really, really scary,” she said. “Considering that so many other people have received this information, I don’t feel like we are being watched, but at the same time it’s pretty creepy. It’s not just a random political campaign pamphlet that’s coming in our mail.”