Fed Lending Saved Corporate America. It Could Do the Same for Cities and States.

Local budgets are facing a wave of austerity that could be avoided with low-interest lending by the Fed, a new report suggests. 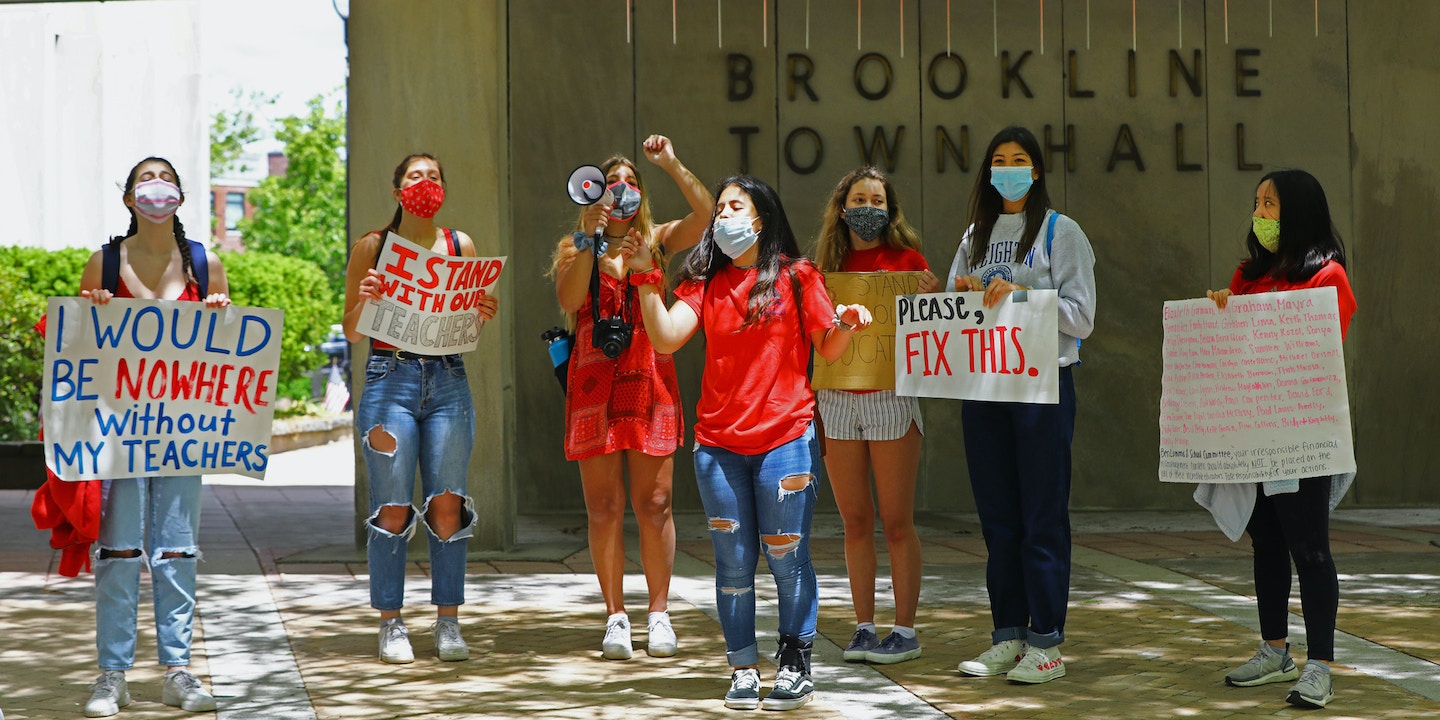 On Tuesday, President Donald Trump slammed the door on the possibility of another Covid-19 relief package, announcing that his administration would withdraw from negotiations until after the election. While he’s since followed up with an offer to pass parts of the bill, the development has dire consequences for unemployed workers, struggling small businesses, and state and local governments — which are now staring into a fiscal abyss.

Faced with cratering revenues since the start of the pandemic, states have already cut billions from their public education budgets. More than 200,000 state and local government employees, many of whom are K-12 teachers, lost their jobs in September. Washington state is currently considering eliminating Medicaid coverage for all adult dental care. New Jersey has already halted plans to replace more than 300,000 unsafe lead service lines. At least 65 percent of U.S. cities plan to delay or cancel capital spending to fix roads, upgrade water systems, or make other infrastructure improvements, according to a survey by the National League of Cities.

Unlike the federal government, most states must balance their budgets. That means that their options are limited to begging the federal government, borrowing on Wall Street, and gutting services. Many were banking on further federal aid to avoid even deeper cuts. When California passed its 2021 budget this summer, for example, Gov. Gavin Newsom agreed to restore $11 billion in cuts to housing programs, court services, and public universities if additional federal aid arrived by October 15.

There could be another way to stave off a devastating wave of austerity, according to a new report. Instead of slashing spending on health care or social services, governments could cut back on the money they send to Wall Street. In offering low-interest lending, the Federal Reserve would simply be extending the same benefit to public entities that it already offers to banks and private companies.

The advocacy group Action Center on Race and the Economy estimates that U.S. cities and states spend a cumulative $160 billion annually just on interest payment to banks and bondholders, thanks to high borrowing costs. If the Fed extended long-term, zero-interest loans to public borrowers, borrowers could refinance their debt and free up these funds for immediate needs, according to ACRE. While the central bank has so far leveraged its CARES Act lending power primarily in service of the investor class, there’s nothing stopping it from coming more forcefully to the rescue of cities and states.

There’s no silver bullet for soaring state revenue shortfalls, which could top $550 billion by the end of fiscal year 2022, according to a projection by the Center for Budget and Policy Priorities. But the savings from wiping out interest payments would amount to more than the $150 billion in direct aid sent to state and local governments through the first relief package. It’s also enough to pay for a host of progressive initiatives, including helping 13 million families avoid eviction by covering their rent for a year, according to the ACRE report.

“The crisis facing public budgets is so unprecedented that we have state and local governments essentially looking under the couch cushions,” said Saqib Bhatti, co-executive director of ACRE. “It turns out this is a really big chunk of change.”

Elected officials in five cities and two states have signed onto a letter initiated by ACRE and addressed to Fed Chair Jerome Powell. While states can currently borrow from the Fed through its Municipal Liquidity Facility, established in April, critics say that the terms are punitive.

The savings from wiping out interest payments would amount to $160 billion — more help than the first congressional relief package.

“Shredding an already fragile social safety net to balance the budget will only deepen the crises in our localities,” the letter reads. “We are struggling to balance the budget, service the debt, and keep our cities and states afloat while preparing for possible future waves of COVID-19.”

Six members of Chicago’s City Council introduced a resolution on Wednesday urging the Fed to offer loans with terms of up to 30 years to meet the borrowing needs of state and local governments. The resolution notes that the city’s interest payments for fiscal year 2018 amounted to more than 1.1 billion — the better part of the 1.2 billion budget deficit the city is forecasting as it prepares to pass next year’s budget.

The state of Illinois, meanwhile, passed a budget this summer that relies on $6 billion in borrowing, with Gov. JB Pritzker warning that the state faces “extraordinary painful cuts” without further federal aid.

So far, only Illinois is just one of two public borrowers to make use of the Fed’s municipal lending facility, through a 3.83 percent interest rate bond that must be paid back within a year. Illinois’s credit rating is particularly bad — it sits just above junk status — but high-interest rates and short repayment terms mean that 97 percent of cities, states, and counties that are technically eligible for the program could actually do better on the private bond market, according to an analysis by the Center for Popular Democracy.

The “punitive and unappealing” terms are particularly stark in comparison with those offered by the Fed through lending facilities that buy corporate bonds and asset-backed securities, noted Covid-19 Congressional Oversight Commissioner Bharat Ramamurti in a September 17 hearing. Ramamurti questioned the terms set by the Fed and the Treasury Department, under which the Fed purchased a bond from Phillip Morris that pays 0.75 percent interest, while a state with the same credit rating would be subject to more than double the interest rate over a shorter repayment term.

Congressional Republicans, as well as Trump, have painted the demand for more aid to local governments as a blue-state bailout that could encourage future fiscal mismanagement. But the budget shortfalls facing Democratic- and Republican-managed states are effectively equivalent, according to Benjamin Dulchin, director of the Center for Popular Democracy’s Fed Up campaign.

“This isn’t a red-state or a blue-state problem, it’s a local government problem,” said Dulchin. “There’s no ‘moral hazard’ here, because cities and states didn’t cause the pandemic. Lending them what they need to avoid austerity and layoffs would be good for residents and good for the economic recovery.”

States and municipalities have already laid off or furloughed more than 1.5 million public-sector workers over the course of the pandemic, deepening a deeply unequal recession. Laid-off public-sector workers are 20 percent more likely to be Black than those in the private sector, according to an analysis by the Center on Economic and Policy Research.

In New York City, the union representing municipal workers is fighting to stop 22,000 layoffs proposed to plug the city’s budget gap. Henry Garrido, executive director of AFSCME District Council 37, said that in the course of negotiations with the city, he looked into the possibility of Fed borrowing. But he quickly discovered that the city could get far better terms on the private market. That remains true even after the city and state of New York had their credit ratings downgraded last week.

Many of the New York City workers facing layoffs had “essential” jobs they continued to perform throughout the pandemic, said Garrido, including a respiratory therapist whose entire family died of Covid-19.

“That this is the reward for her sacrifice, it’s morally reprehensible,” he said. “Somehow, we’re always the ones asked to pay.”