Funds were invested despite the fact that Singer’s flagship hedge fund has been badly underperforming the market over the past decade. 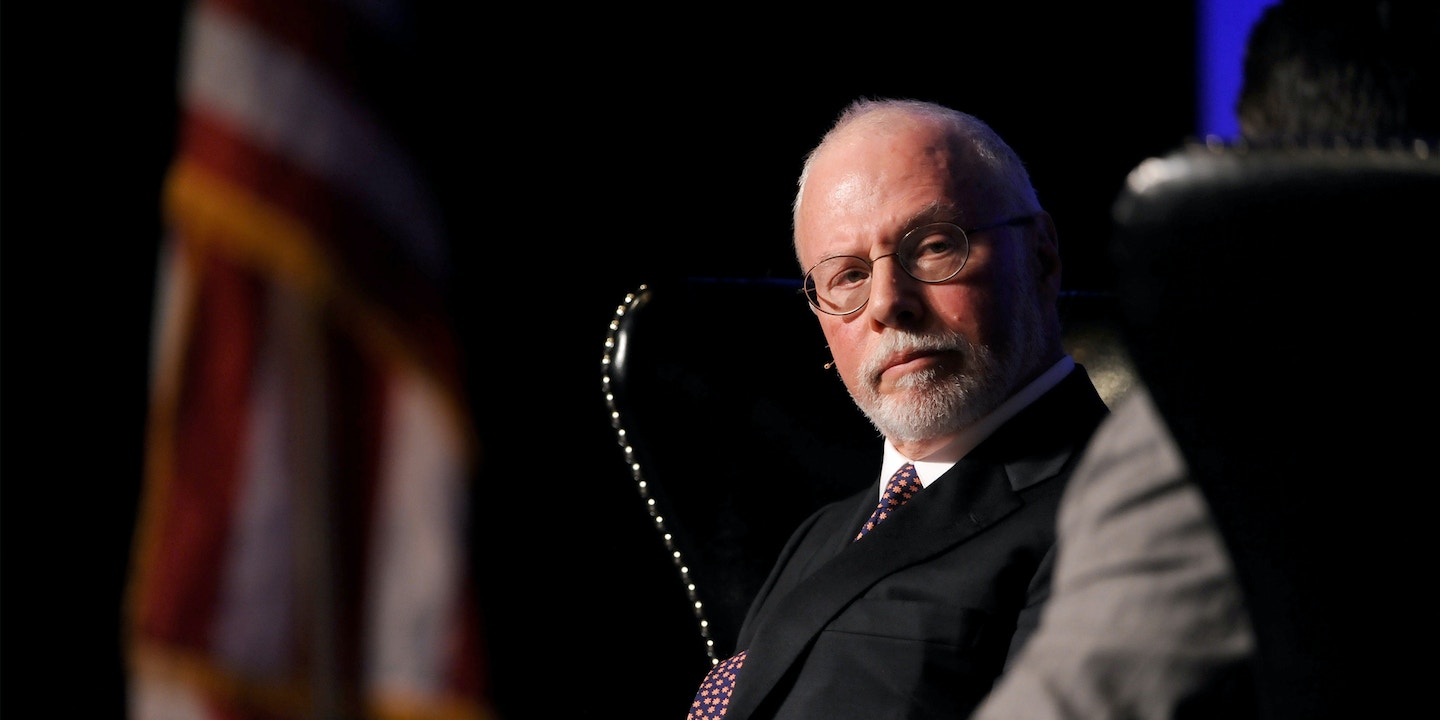 In March, Paul Singer, one of the nation’s richest hedge fund managers, cut a $500,000 check to the Republican Governors Association. It was part of a gubernatorial spending spree that stretched back to 2013 and saw some $7 million flow from Singer to the campaign arm for GOP governors.

Singer, however, is not a typical partisan billionaire looking to lower tax rates and beat back the creep of socialism: Singer’s business model depends in part on lucrative fees accrued from public funds — funds that are often controlled by trustees appointed by Republican governors.

Singer’s flagship hedge fund, Elliott Management, has been badly underperforming the market over the past decade, leading some institutional investors to look elsewhere to park their money. That’s how the free market is supposed to work — and, so that it doesn’t become distorted by kickbacks or bribery, the Securities and Exchange Commission enforces what’s known as a “pay-to-play rule,” which forbids investment managers from contributing to politicians who have a say in doling out public pension fund money to those investment managers. The SEC also bars indirect contributions, to prevent clever funneling through opaque entities.

Singer’s donation was made just four days after the RGA had made its largest direct contribution of the 2020 cycle: $150,000 to a committee to defend Alaska Gov. Mike Dunleavy against a recall campaign. When combined with the RGA’s affiliated Super PAC, the second-largest contribution made by the committees jointly was in June: $100,000 to Indiana Gov. Eric Holcomb’s reelection campaign, through a Super PAC by which the RGA is the near-exclusive donor. Dunleavy is facing a recall petition due to his advocacy for dramatic cuts to state government.

Elliott Management told The Intercept that these contributions were made to the RGA’s operating account and that they were assured the money would not be funneled to support individual governors. “The problem with this generally is that money is fungible, so when you free that money up for administrative expenses, the committee has more money for political contributions,” said Larry Noble, a former general counsel of the Federal Elections Commission.

In the fall of 2019, Singer picked up new commitments totaling $138 million for his firms. The Alaska Permanent Fund Corporation committed $58 million to Elliott Management, while the Arkansas Teachers Retirement System and the Indiana Public Retirement System committed $30 million and $50 million, respectively, to the Aeolus insurance investing platform, where he is a majority shareholder.

Documents show that the Aeolus fund has had a negative 6.7 percent return for the past three years, compared to a 10.7 percent return for the S&P 500 stock market index. The Intercept could not determine Elliott’s exact performance, but it has performed about 5 to 5.5 percent annually for the past eight years, according to documents from the state of New Jersey, compared to 10.24 percent for the S&P 500 over the same time period.

A search of available records indicates that all of the public pension funds that have made new or expanded investments in Aeolus after Singer purchased a majority ownership stake in 2016 are in states with Republican governors (Massachusetts, Florida, and Arkansas are the others). Massachusetts later redeemed its investment in Aeolus.

Singer is not the only RGA donor who also collects checks from states with Republican gubernatorial oversight of state pensions, but he is the largest. An International Business Times/MapLight review found that in the 2016 cycle, executives at firms managing state pension money have donated nearly $1.3 million to the RGA, on top of the more than $6.8 million such firms gave to the RGA in 2013 and 2014. Of the $6.8 million, Singer donated $3.85 million.

Despite the fact that Singer has likely earned a significant portion of his $3.6 billion net worth from the retirements of government workers, he appears to hold a deep abhorrence for the state. Referring obliquely to politicians on the left like Sen. Bernie Sanders and Rep. Alexandria Ocasio-Cortez, Singer said in 2019 that “they call it socialism, but it is more accurately described as left-wing statism lubricated by showers of free stuff promised by politicians who believe that money comes from a printing press rather than the productive efforts of businesspeople and workers.” Singer is the chair of the Manhattan Institute, which advocates for cuts to public pensions.

After Singer drew the ire of the Communications Workers of America union last fall by urging changes that the union argued would result in layoffs, the union revealed the subpar performance of Elliott Management and started to pressure large institutional investors like the University of California and the New Jersey State Investment Council to redeem their hundreds of millions of dollars in investments, which they began to do. (I worked as a researcher for CWA from 2015 to 2018, prior to CWA’s campaign against Elliott, and in a different department.) 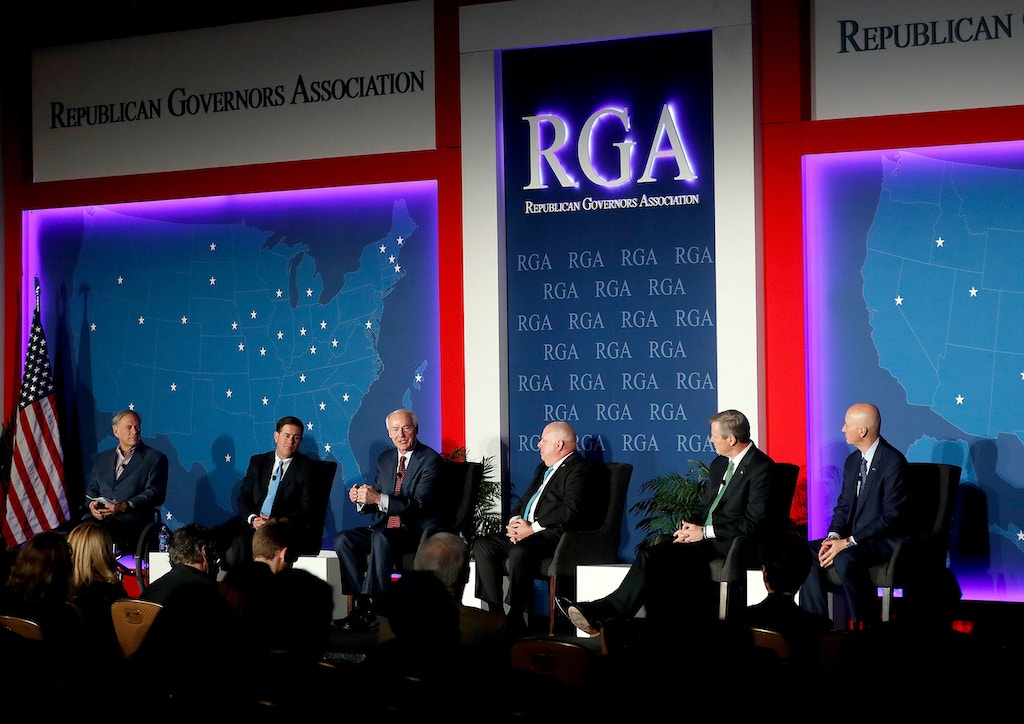 Singer has been a prodigious donor to the RGA for years. Singer made a $500,000 donation to the RGA in 2019 and donated $2.25 million to the organization from 2017 to 2018, when the RGA was found to have violated Alaska state law by funneling $2.7 million in spending into supporting Dunleavey’s race, while obscuring its donors. Singer donated a total of $1.25 million to the RGA in 2015 and 2016, when it spent over $10 million to elect Holcomb. Singer has not donated to the Democratic Governors Association.

Holcomb and Dunleavy both hold influential positions over the pensions in their states. Holcomb appoints nearly all of the INPRS trustees while Dunleavy as of the fourth quarter of 2019 had appointed two out of the six trustees of the Alaska Permanent Fund. The trustees appoint the staff of the funds, who in turn make the investments. Holcomb, the Indiana governor, is the policy chair of the RGA, giving him a leadership role in the organization.

Holcomb was appointed as lieutenant governor in March 2016 by Vice President Mike Pence who then in turn handpicked Holcomb to replace him as the Republican nominee for governor that July. Showcasing the close political relationships between Singer and Indiana’s power elite, the Washington Post has reported that Pence has long courted Singer as a donor to fuel his ambitions, while Politico reported that Pence “showered praise” on Singer at a dinner in 2019.

In response to a detailed request for comment from The Intercept, an Elliott spokesperson said that “Mr. Singer’s contributions to the RGA have been limited to the RGA’s operating account. This restricted account cannot be used by the RGA to make political contributions to any candidate. It is therefore wrong to suggest that any of Mr. Singer’s funds were transferred to any candidate by the RGA. They were not.”

RGA Communications Director Amelia Chassé Alcivar similarly told The Intercept, “Mr. Singer’s contributions were made to the RGA’s operating account, which is used solely for administrative expenses. Therefore, the contributions in question could not be, and were not, directed to any political or election-related expenditures.” The RGA does not appear to mention any “operating account” in any public filing or statement, and neither Singer nor the RGA provided documentation of this claim.

“Both Elliott and Aeolus are proud of their investment track records, have robust compliance procedures in place, and have at all times complied with all relevant laws and regulations governing political contributions,” the Elliott spokesperson continued. Spokespeople for Dunleavy, Holcomb, and the Alaska and Indiana funds did not respond to a request for comment.

Even if the contributions were not going to the political fund, the RGA is still a clearinghouse for Republican political activity supporting governors.

The pay-to-play rule “prohibits acts done indirectly, which if done directly would violate the rule,” said William Beggs, a finance professor at the University of San Diego. “The whole situation certainly looks troubling.”

Scandals surrounding investments at public pension funds have become common in recent years. The former CEO of the country’s largest public pension fund, CalPERS, went to prison for receiving bribes from an agent of a private equity firm, as did the former comptroller of New York state, Alan Hevesi, who controlled New York’s state workers pension fund. The SEC’s pay-to-play rule grew out of these controversies.

But the SEC has never prosecuted a violation under the anti-circumvention provision. The SEC’s reticence to prosecute circumventions rule raises concerns for advocates like Eileen Appelbaum, an economist who has studied the industry and is the co-director of the Center for Economic and Policy Research.

“We have to get rid of 527 groups like the RGA. Managers can circumvent the rules by making contributions to shell organizations,” said Appelbaum.“The SEC and FEC should investigate whether the pay-to-play rules are being violated.”