The outgoing president’s campaign is filling the inboxes of supporters with messages that aim to incite fear and anger. A barrage of post-election fundraising emails from the campaign of President Donald Trump crossed into dangerous territory this week with messages that made the inflammatory claim, “The Left HATES YOU.”

That phrase was used in emails sent on Monday and Tuesday that also characterized violence at a pro-Trump march in Washington on Saturday as “Radical Left ANTIFA SCUM assaulting Trump supporters who are proudly (and peacefully!) showing support for their favorite President.” 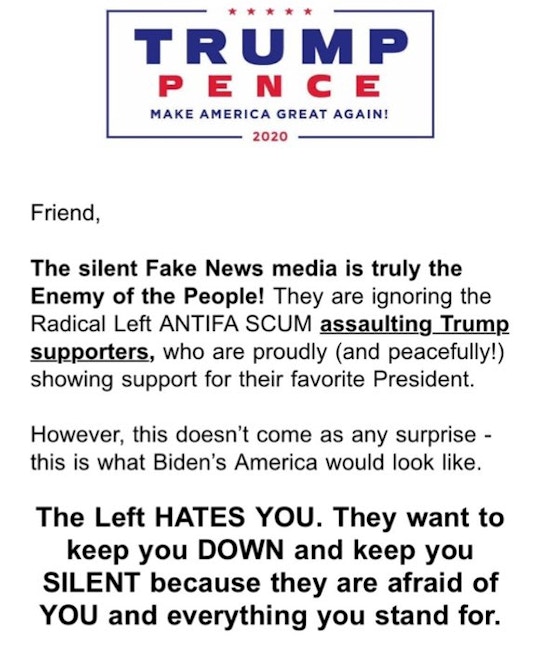 A screenshot from a Trump campaign email to supporters.

The text of the emails echoed the president’s Twitter feed, where he wrote on Saturday that “ANTIFA SCUM ran for the hills today when they tried attacking the people at the Trump Rally, because those people aggressively fought back.”

The emails, which were part of a series of messages urging Trump supporters to keep sending money to the defeated president, seem designed to also nurture a sense of victimhood among the vocal minority of over 73 million Americans who voted for him.

The Trump bait-and-switch con continues. Says he wants your money for the Georgia recount. Spoiler: GA taxpayers are paying for the recount. Solicitation fine print makes clear first $5,000 any donor gives goes to Trump’s new slush fund Save America PAC, NOT to his recount fund. pic.twitter.com/mXtH6NjShE

The messages also falsely claimed that the media had failed to report the violence on Saturday, which the Trump campaign blamed on the imaginary coalition of “Joe Biden and his ANTIFA allies.”

While anti-Trump protesters were responsible for starting some of the skirmishes on the streets of Washington, none of them appeared to have ties to Biden, and there is video evidence that at least some of the violence was initiated by Trump supporters, including members of the Proud Boys who assaulted a photographer as a Voice of America reporter filmed them.

After chanting "The media sucks", one of the Proud Boys attacked an independent journalist who was filming the march. He was standing just next to me. Watch the video ??#MarchForTrump #MillionMAGAMarch2020 #ProudBoys #MAGAMillionMarch #DC pic.twitter.com/Yo7N6NEOUA

Before a group of Proud Boys appeared to start a brawl with antifascist activists later that night at H Street and 11th, a Washington Post reporter heard one Trump supporter yell, “I came here to fight!”

Here is the beginning of what happened tonight. #DCProtests pic.twitter.com/YsZCdeGi5E

But by sharing selectively edited video of the day’s violence, Republicans, including the president and his daughter Ivanka, falsely portrayed the Trump supporters as peaceful, blameless victims, creating new martyrs to the lost cause of Trumpism.

The media’s near total silence about the physical violence being perpetrated against conservatives is shameful & dangerous.

Just image the outrage and indignation if this went the other way.

Violence is never the answer and instigators must be condemned and prosecuted.

Perhaps the clearest example is a viral clip, viewed more than 5.6 million times, that was shared by the president on Twitter with the comment, “Human Radical Left garbage did this.” The edited video was posted by Andy Ngo, a right-wing activist who uses selectively edited video and false captions to create misleading propaganda about protesters.

The images Trump was so outraged by show part of a fist fight on Saturday afternoon at the intersection of Connecticut Avenue and I Street, which ended with a Trump supporter bleeding on the ground, after being knocked down by a man carrying a “Trump/Pence Out Now” sign.

Graphic: A close-up angle of BLM rioters knocking a man unconscious who was leaving the #MillionMAGAMarch in DC earlier today. They also steal his phone when he’s on the ground. Video by @FromKalen. pic.twitter.com/cf7bnkpsCf

That edited clip, which was recorded by a right-wing videographer, begins with the Trump supporter, a white man wearing an AS Roma jacket, surrounded by a crowd of protesters. As he turns to leave, he is punched from behind, and then kicked twice while on the ground before being helped to his feet with a bloody face.

On Sunday, Trump retweeted another video edit of the incident, shot from a slightly different angle by a cameraman for the right-wing Daily Caller and produced by the Republican propagandist filmmaker Dinesh D’Souza.

Hey @JoeBiden, are you going to denounce this? pic.twitter.com/uilzBZRrnL

D’Souza’s caption falsely suggested that Biden, who has denounced all forms of violence at protests, would hesitate to condemn the incident. D’Souza also mocked Biden’s plea for post-election unity, which is exactly what the inflammatory emails from Trump’s campaign that reference this video are trying to make impossible.

While the violence inflicted on the Trump supporter is undeniably disturbing, both edits shared by the president were carefully constructed to leave out what happened in the 40 or so seconds before the punch was thrown.

The raw footage the two clips were made from, which were both recorded by conservative videographers, show that the Trump supporter initiated the fight in the intersection, which began when he and another pro-Trump marcher converged on a protester with a megaphone, who told them to “Get the fuck out” of the liberal city.

Washington DC: 16:07 this violent altercation occurred between multiple individuals at Connecticut and I st. pic.twitter.com/ygxhzaF2tG

The uncut videos show that after the other Trump supporter ripped the megaphone from the protester’s hands, the man in the AS Roma jacket shoved him to the ground and stumbled over him into the intersection.

After two protesters responded to his aggression by shoving him, he charged around the intersection, cocking his fist and threatening protesters. After one small woman moved toward him, he knocked her to the ground and shouted, “None of you want to fucking do that!” As the shoving continued, the man cocked his fist at one protester and ordered him to “Keep fucking walking!” He then pushed and slapped two women and fended off blows from a young man before turning to leave. It was then that he was punched from behind and fell face first to the street.

The first images of the Daily Caller video, along with news photographs shot minutes earlier, show that the melee at the intersection came just after an earlier incident in which another Trump supporter with a flag and a blue MAGA cap was doused with liquid, jeered and slapped by anti-Trump protesters just around the corner from Black Lives Matter Plaza. 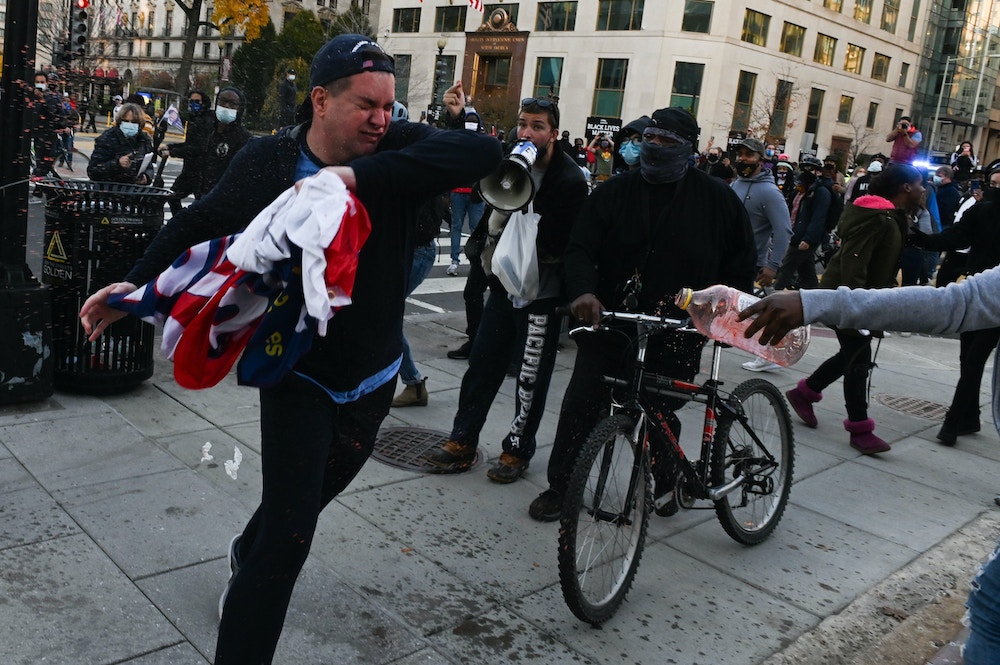 A Trump supporter was doused with liquid by anti-Trump protesters around the corner from Black Lives Matter Plaza outside the White House on Saturday. 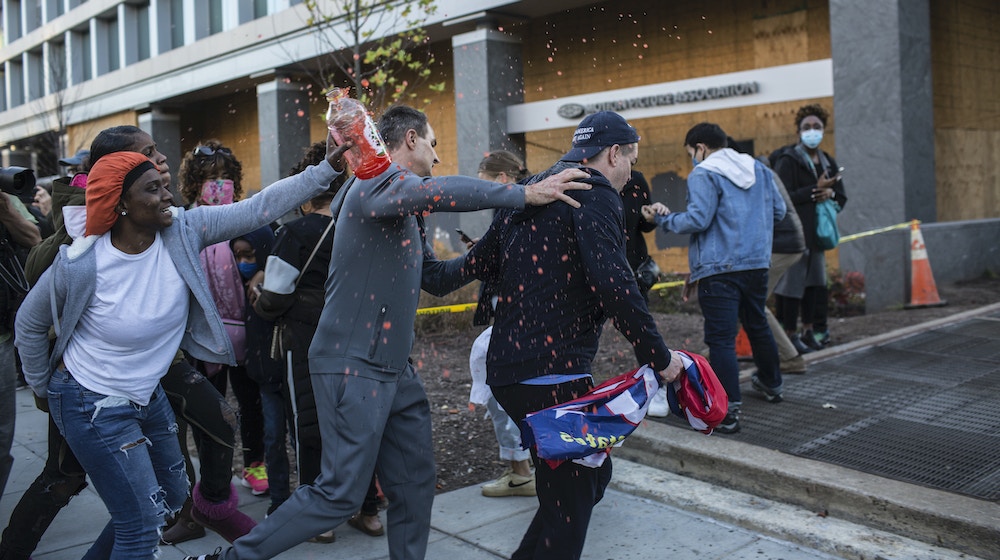 A Trump supporter was harassed by anti-Trump protesters near Black Lives Matter Plaza on Saturday in Washington.

That man, and some of the protesters who harassed him, had just reached the intersection of Connecticut and I when the man in the AS Roma jacket assaulted the protester with the megaphone.

Another video clip shot earlier in the afternoon near the same intersection by one of the cameramen who captured the fight shows that some of the same protesters had also harassed two leading members of the far-right Patriot Prayer group, Joey Gibson and Chandler Pappas, who had traveled to the city from the Pacific Northwest.

More of the violent altercation that occurred earlier. A young girl assaults and elderly man. A young male brandishes a knife to Joey Gibson. pic.twitter.com/VFkhsz6yqw

Pappas wore a cap commemorating another member of the group, Aaron “Jay” Danielson, who was killed by an antifascist activist after a pro-Trump caravan of trucks drove into Portland, Oregon in August. The march in Washington on Saturday seemed to echo that event from late summer in that both demonstrations were designed to bring thousands of Trump supporters from rural and exurban areas to rally in the heart of liberal cities where support for racial justice protests was strong.

While the participants in the melee that led to the Trump supporter’s injuries have not spoken publicly about what triggered it, there seems to be no evidence that enthusiasm for Biden played any role in their anger at the Trump supporters. The anti-Trump poster held by the man who threw the punch was produced by RefuseFascism.org, a protest group that was formed in December, 2016 to respond to the emergency of Trump’s election by activists with politics considerably to the left of Biden. Refuse Fascism activists had gathered to oppose the pro-Trump march, rejecting pleas from mainstream Democrats to simply ignore the gathering.

Part of why MAGa was so big today was because of you who insisted people not oppose them.

You conceded the public square to the same people who would have lynched Black people & had picnics at their hangings. Shameful #MillionMAGAMarch pic.twitter.com/QxCh5nSTSQ

Four of the protesters who engaged in the fight with the Trump supporter were arrested by DC’s Metropolitan Police Department within minutes and accused of being “involved in a collaborative effort to incite violence during first amendment assemblies.” All four of those detained are Black residents of DC. (The police are also seeking to arrest two Black women who kicked the Trump supporter and one Black man who punched him.) The man who can be seen on video initiating the physical confrontation was apparently not detained or charged with any offense.

Since the Trump supporters from out of town made it clear that night that they oppose the Black Lives Matter movement, by gleefully pulling down and destroying signs with that racial justice slogan from a building on Black Lives Matter Plaza, its not hard to imagine why their visit, to a city where their favorite president got just 5.4 percent of the vote, was not welcome.