Even countries that hosted vaccine trials — like Argentina, South Africa, Brazil, and Turkey — will not receive adequate supplies. Pfizer CEO Albert Bourla recently heaped praise on “the almost 44,000 people who selflessly raised their hands to participate in our trial.”

“Each of you has helped to bring the world one step closer to our shared goal of a potential vaccine to fight this devastating pandemic,” Bourla wrote in an open letter to volunteers who took part in Pfizer’s Covid-19 vaccine research, which was conducted in Argentina, South Africa, Brazil, Germany, and Turkey as well as the U.S. His letter was published on November 9, the same day Pfizer announced that the vaccine was more than 90 percent effective at preventing the disease, and Bourla laid this considerable accomplishment at the feet of the medical volunteers: “You are the true heroes, and the whole world owes you a tremendous debt of gratitude.”

But Argentina, South Africa, Brazil, and Turkey will have to be satisfied with Pfizer’s gratitude, because (like most countries in the world) they won’t be receiving enough of the vaccine to inoculate their populations, at least not anytime soon.

Meanwhile, the U.S. and Germany — along with Canada and the rest of the European Union — have contracted for enough doses of various Covid-19 vaccines to inoculate their populations several times over. While the U.S. is struggling with the logistics of its vaccine rollout — fewer than 3 million people have received the first dose so far — adequate supplies should eventually be available. The U.S. pre-purchased 100 million doses of the Pfizer vaccine for $1.95 billion in the summer (and reportedly passed on the opportunity to secure another 100 million doses). Last week, the Department of Health and Human Services announced a deal to buy another 100 million doses of the vaccine by July 2021, and the government has the option to purchase an additional 400 million doses. The U.S. has also purchased 200 million doses of the Moderna vaccine, which is also extremely effective against Covid-19. Those doses are due by the second quarter of 2021, and the government may buy up to 300 million more doses. And the U.S. has contracts for additional vaccine doses from Ology, Sanofi, Novavax, and Johnson & Johnson, whose candidates are in earlier stages of development.

Pharmaceutical companies and individual executives are already profiting handsomely from their medical breakthroughs. On the same day that he sent his open letter, Bourla, whose net worth is estimated at more than $26 million, sold more than $5 million worth of his shares of Pfizer stock. Pfizer has already made an estimated $975 million from the vaccine this year and is expected to earn another $19 billion in revenue from the vaccine in 2021, according to Morgan Stanley. Pfizer’s profit margin on the vaccine is estimated at between 60 and 80 percent. Moderna is projected to make more than $10 billion from its vaccine next year. A coronavirus vaccination center at the fair grounds in Hamburg, Germany, on Dec. 8, 2020.

The estimated $100 billion in sales to be made from a Covid-19 vaccine was clearly part of what attracted pharmaceutical companies to vaccine research. For the participants in that research, the calculus is different. In developing countries, “you find people who don’t have medical care and are desperate for medical attention and will grasp at the straws of medical research,” said Harriet Washington, a medical ethicist and author.

A relative lack of oversight and lower operating costs are some of the reasons that pharmaceutical companies do the majority of their research in less affluent countries.

That desperation is only part of the reason that pharmaceutical companies do the majority of their research in less affluent countries, according to Washington, who pointed to a relative lack of oversight and lower operating costs as additional reasons that the industry is drawn to those places. The Covid-19 vaccine research participants in South Africa, Argentina, Brazil, and Turkey “will work more cheaply than the people in the U.S. and Germany,” she said.

The ethical problem this creates — that people in developing countries have less access to medical breakthroughs despite shouldering a disproportionate share of the risk that enables their development — far predates the coronavirus pandemic. “There are inherent inequities that are repeated in every epidemic,” said Washington. “It’s a consistent pattern; you’ll see it as far back as you want to go.”

Whether they participate in drug research or not, people in low- and middle-income countries often lack access to lifesaving medical breakthroughs, which are sometimes priced out of their reach. Gilead, which holds the patent on the hepatitis C drug sofosbuvir, has provided a clear and tragic illustration of how deadly this dynamic can be. Only about 1 in 7 people who needed the company’s lifesaving drug in Brazil had received it as of June 2019. In that country alone, thousands died of the treatable disease, according to the nonprofit group Make Medicines Affordable. Though many drugs eventually become available, access is often delayed for people in developing countries, as was the case for lifesaving HIV medications, which are still unavailable to some 15 million infected people around the world and arrived in some poorer countries more than a decade after they were used in wealthier ones.

“We see lags occur in almost every intervention in the world whether it’s a new drug or medical device,” said Dr. Krishna Udayakumar, founding director of the Duke Global Health Innovation Center. “There’s not as much money in products reaching markets in low- and middle-income countries.” As a result, in much of the world, access to lifesaving developments often depends on funding from donors, “which is always less than you’d like,” he said.

The deadly consequences of delayed access to the Covid-19 vaccine will be on display in the coming year. The number of people vaccinated worldwide in 2021 will depend partly on whether other potential vaccines candidates are successful and whether they’re delivered as one dose or two. But it’s already clear that the majority of countries will not have enough, while rich countries are hoarding vaccine supplies.

An international initiative to ensure equitable access to the vaccine, called the COVAX Advance Market Commitment and governed by the public-private health alliance Gavi, aims to provide participating countries with enough vaccines to inoculate up to 20 percent of their populations by the end of 2021. But even under the best-case scenario, this goal would leave the vast majority of the population unvaccinated — and is “subject to funding availability,” as the group’s website makes clear. 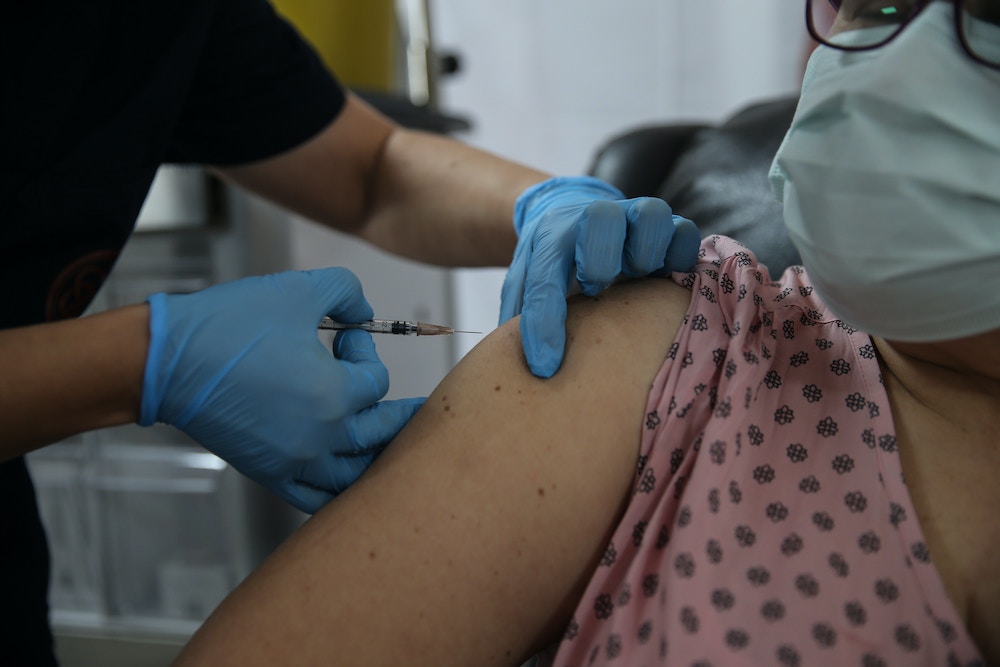 A health care worker injects a syringe of the Phase 3 vaccine trial to a volunteer at the Ankara University Ibni Sina Hospital in Ankara, Turkey, on Oct. 27, 2020.

Some international health activists have become frustrated with Gavi. “On day one, when the first person was vaccinated in the U.K., we should have been seeing the equivalent in a developing country,” said Kate Elder, senior vaccines policy adviser for Médecins Sans Frontières. “But we didn’t. And we don’t have any precision about when we can expect those doses in developing countries.”

Elder pointed out that, despite its stated goal of providing equal access, the international vaccine distribution effort is hindered by the global power and wealth imbalance. “Gavi will never call out vaccine nationalism because its biggest donors — like the U.K. government — are the most powerful members of their board,” she said.

The international vaccine distribution effort is hindered by the global power and wealth imbalance.

The World Bank is providing additional aid for the delivery of vaccines, but it is in the form of loans, which poor countries will need to repay. As a result of the delays, many people in low-income countries will likely not get the vaccine until 2023 or 2024, which will result in an unknown number of deaths.

Public Citizen has proposed several ways that the U.S. could expand access to the vaccine, including building new production facilities and taking advantage of an obscure statute that allows the government to override companies’ patents on inventions they fund. Meanwhile, Kenya, India, and South Africa put forward a measure at the World Trade Organization that would waive some intellectual property rights for coronavirus-related products, including vaccines. The proposal, which was supported by 99 countries, has yet to pass after being opposed by wealthy countries, including the U.S., EU members, Japan, the U.K., and Australia.

But the waiving of patents is only the first step in ensuring global access to vaccines. “Know-how is the bigger problem than patent rights in the shorter run,” said James Love, who directs the nonprofit advocacy group Knowledge Ecology International. Love pointed to Moderna, the federally funded vaccine maker that has already pledged not to enforce the patent on its vaccine. “But you still can’t go out and make their vaccine unless you know how they did it,” said Love. “You need to force the people who have the know-how to share the know-how because it’s a fucking pandemic.”

While the U.S. government and the companies it funded to make vaccines are already getting credit for ending the pandemic, Love points to a big hole in that success story: that taxpayers wound up paying for deals that limited global access.

“Some people are going to say this is a massive success because the innovation story is pretty good,” said Love. “But the reality is the government took our money, gave it to the companies, and wrote terrible contracts so we ended up with very few rights over the inventions that we financed.”

The problem was entirely avoidable, according to Love. “The government could have put mandatory sharing of know-how built into each of its contracts so the technology transfer would have started as soon as these vaccines were in clinical trials,” he said. “That did not happen. And one of the consequences of these giveaways is that we’ve condemned developing countries to delayed access to vaccines.”

The Trump administration has been particularly generous with the pharmaceutical industry, removing standard protections from some of their contracts, and has shunned international efforts to pool resources to fight the pandemic. But it’s not too late for the country to reverse course.

“President-elect Biden has the power to change that,” said Public Citizen’s Rizvi. “He can think bigger and share the vaccine recipe and help ramp up production and manufacturing capacity to further expand vaccine supply quickly.”

The ethical dilemmas raised by conducting Covid-19 vaccine research in countries that may not have their own supply for years are fixable too, according to Washington. “The inequities are easy to address,” she said. “You simply treat people in the developing world the same way you treat everyone else.”