The far right is focused on “Stop the Steal” nonsense, but violence driven by white supremacy won’t disappear even if Trump does. 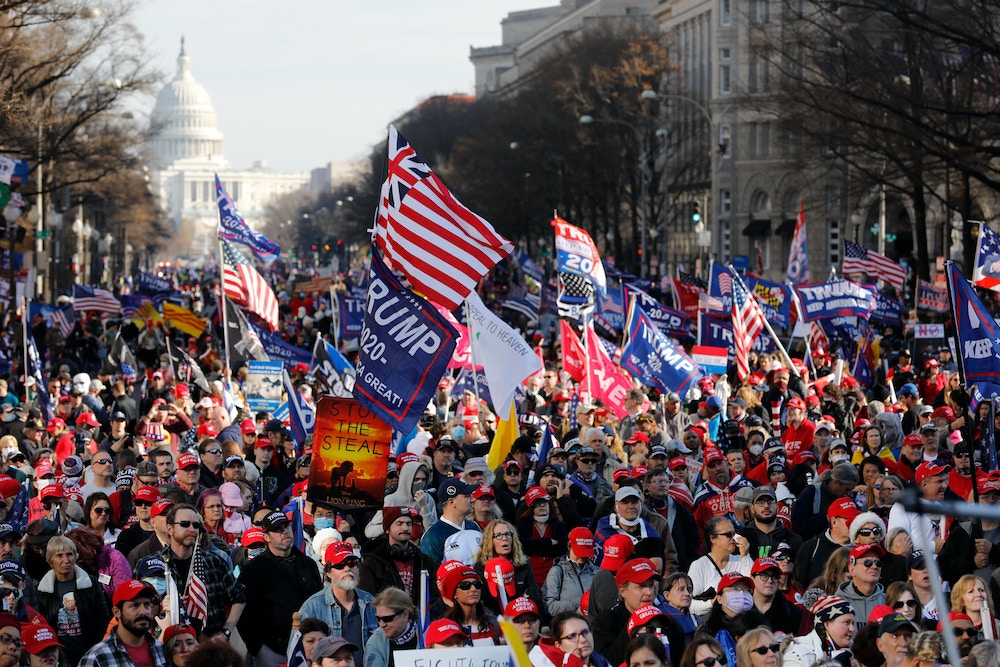 Trump supporters gather for the “Stop the Steal” rally at Freedom Plaza in Washington, D.C., on Dec. 12, 2020.

On Wednesday, President Donald Trump’s craven loyalists in Congress plan to disrupt the certification of President-elect Joe Biden’s victory. Whether cynical or delusional, their plan to reject swing-state electors will fail to overturn the election results. Meanwhile, Trump has called upon his supporters to descend on Washington, D.C., that day to demand that Congress hand him a second term. The protest, he tweeted, “will be wild.”

Under the auspices of Trump’s “last stand,” violence from his furious supporters seems all but inevitable. For Black communities and other communities of color in Washington, thousands of white supremacists amassing in their city is in itself a threat of violence. For far-right groups, the president’s call represents a follow-up to his earlier, perturbing suggestion that the Proud Boys “stand by.” Now, they are being activated.

Posts about Wednesday’s protests shared on Telegram and Parler, the social media platform preferred by the far right, include promises of “boots on the ground” and anonymous tips for smuggling guns into Washington, where gun laws are strict. Enrique Tarrio, the leader of the Proud Boys, posted that his group would turn up “in record numbers.” The last major “Stop the Steal” rally in Washington in December ended in four stabbings as Proud Boys attacked passersby and anti-fascist counterprotesters after dark.

Yet the “last stand” narrative surrounding Wednesday’s planned protests is no more than the rhetoric of escalation. There should be little doubt that Trump, desperate and wretched in defeat, will continue to call upon his base of white nationalists, conspiracy theorists, Proud Boys, and other fascists to rally after the election is certified — perhaps long after Biden is inaugurated.

Even without Trump’s direct incitements, the far-right violence emboldened under his presidency is not going away.

Even without Trump’s direct incitements, though, the far-right violence emboldened under his presidency is not going away. While the stated aim of die-hard Trump supporters may for the moment be to reverse a “stolen” election, these groups will continue to exist and spread violence as a central part of their ethos when they gather en masse. That ethos, of course, is white supremacy. It is no accident that in addition to the stabbings, December’s “Stop the Steal” rally in Washington saw members of the fascistic group vandalize two Black churches and tear down and burn Black Lives Matter flags — an act of destruction for which Tarrio was arrested in Washington on Monday.

An exclusive focus on far-right attacks in response to Trump’s loss risks overlooking the ways already extant white supremacist violence will remain the core extremist threat under Biden. Attacks might come from far-right vigilantes, but we should also be wary of violence perpetrated by government agencies, such as immigration authorities and police.

It’s clear that white supremacy undergirds the commitment to restoring Trump as president. While the fight to overturn the election could well dissipate, the racist, fascistic ideology driving the effort will remain intact. 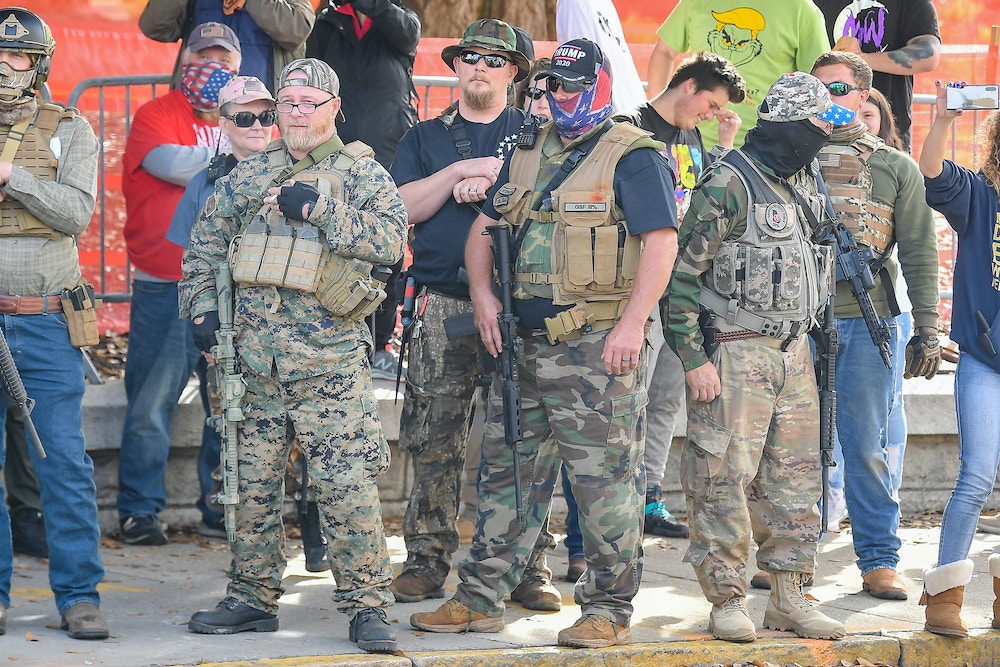 Armed militia members watch members of antifa during a “Stop the Steal” protest at the Georgia Capitol in Atlanta on Dec. 12, 2020.

Focusing on the roots of Trumpian violence does not mean ignoring the new dangers posed by the spread of baseless conspiracies around the president’s electoral loss, which have now become central to the true believers’ worldview. “We now have millions of people that essentially believe that an evil cabal has staged a coup on the government and that militant action is the only solution,” Shane Burley, the Portland, Oregon-based author of “Fascism Today: What It Is and How to End It,” told me. “That is the recipe for seemingly impulsive acts of violence. I’m more concerned about lethal far-right vigilante attacks now than I was when Trump was elected.”

The loss and his refusal to concede have infused a renewed and dangerous millenarianism into a significant portion of his base, who believe in the necessity of Trump’s presidency with ultrareligious zeal. It makes for fertile ground for sporadic political violence: Numerous election officials and Republicans who have challenged Trump’s lies have been threatened since November.

The danger posed by even a tiny percentage of those who believe the election fraud conspiracies and are willing to take violent action is disturbing. “If just one in 100,000 of the people who voted for Trump came to that conclusion, you’d have an army of 740 domestic terrorists,” wrote Paul Waldman in the Washington Post. “How much death and chaos could they cause with a campaign of bombings and mass shootings?”

The concerns are entirely valid — but not to the exclusion of the larger, ongoing white supremacist threat.

The Center for Strategic and International Studies found that white supremacist groups were responsible for two-thirds of the 61 “terrorist plots and attacks” in the first eight months of 2020. Since 2009, the far right has been responsible for over 70 percent of extremist murders. In 2019, the FBI’s annual Hate Crime Statistics Act report recorded 7,314 hate crimes, up from 7,120 the year before. These frightening numbers have led to calls for new policies: A number of national security experts have urged Biden to take on right-wing extremism through a strategy of counterterrorist law enforcement.

While a shift away from the Trump administration’s blustering and dangerous focus on anti-fascists, leftists, and Black liberation fighters would be welcome, it would be misguided to treat the state’s law enforcement apparatus as an ally in the struggle against white supremacist violence. The intractable racism in U.S. policing is reason enough to draw this conclusion. And while certain far-right groups, like Boogaloo adherents, see an enemy in law enforcement, we should keep in mind that our enemies’ enemies are not our friends. Instead, the conflict between anti-racist anti-fascists, white supremacists, and law enforcement is rightly described by some anti-fascist theorists as a “three-way fight.”

It is for this reason that calls for anti-fascists and anti-racists to simply ignore the far-right rallies like the one in Washington are understandable but wrongheaded. They amount to a call to treat violent racists as a passing nuisance that will disappear under the Biden administration — a belief nearly as delusional as the conviction that Trump won the election. One need not take up the militant tactics associated with antifa to see the importance of gathering in great numbers to overwhelm a rally of white supremacists. Indeed, large numbers of counterprotesters lessen the need for physical confrontation to stop the far right from roaming the streets.

In this pandemic moment, the far right holds an advantage: Trumpian fanatics who either don’t believe in the danger of Covid-19 or don’t care about spreading it to those around them are more willing to travel from around the country to converge, as they will this week. Undue burden thus rests on local anti-fascist, anti-racist organizers. Yet this summer’s potent uprisings made clear that in every city, those who would crush white supremacy are able to gather in vast numbers in our own hometowns — and with a message of Black liberation in robust opposition to everything for which white supremacists stand.