It wasn’t long after the incoming Biden administration announced its nominees for key science policy posts that Twitter began to celebrate with #ScienceIsBack. Among those using the hashtag was Eric Lander, a mathematician and molecular biologist who played a lead role in mapping the human genome, and whom Joe Biden had just nominated to be director of the White House Office of Science and Technology Policy.

“Tremendously excited to work alongside so many bright minds to advise the President-elect and push the boundaries of what we dare to believe is possible,” Lander posted on January 15. “We need everyone. #ScienceIsBack.”

This isn’t the first time Lander has been tapped to advise the White House; under former President Barack Obama, Lander served as co-chair of the President’s Council of Advisers on Science and Technology. During his tenure, Lander was involved in 39 reports the group wrote on a wide variety of topics, including antibiotic resistance, big data and privacy, and climate change.

While Lander’s career has not been without controversy, his role in a September 2016 report has many in the criminal legal system hopeful about his return to the White House. That fall, PCAST did not mince words, concluding that a host of long-used pattern-matching forensic practices lacked sufficient scientific underpinning. “Neither experience, nor judgment, nor good professional practices … can substitute for actual evidence of foundational validity and reliability,” the members wrote. “It is an empirical matter for which only empirical evidence is relevant.”

After four years of the Trump administration, which saw federally driven efforts at reforming forensics grind to a halt, many hope that having Lander and other well-respected scientists in key policy positions will reinvigorate those initiatives. “He knows the challenges we face scientifically and operationally,” said Max Houck, a forensic expert with the Global Forensic and Justice Center at Florida International University and the editor-in-chief of an international forensics journal. “I think when he gets around to addressing issues in forensic science, at least he does it with foreknowledge.” Dental molds used for research into bite-mark evidence at the University of Buffalo, N.Y., on April 17, 2013.

Save for DNA analysis, forensic science disciplines were mainly developed according to the needs of law enforcement — bereft of scientific underpinning. That’s particularly true of so-called pattern-matching practices like fingerprint analysis, firearm analysis, bite-mark analysis, shoe tread analysis, and handwriting analysis, all of which involve an “expert” looking at a piece of evidence and visually tying it to a suspect.

PCAST was not the first body to point out the lack of scientific foundation to these practices. In 2009, the National Academy of Sciences released a landmark study titled “Strengthening Forensic Science in the United States: A Path Forward,” which questioned the basis of nearly every forensic discipline used to arrest, prosecute, and send people to prison. With the exception of DNA analysis, it found, “no forensic method has been rigorously shown to have the capacity to consistently, and with a high degree of certainty, demonstrate a connection between evidence and a specific individual or source.”

The release of the NAS report led to massive upheaval in the forensics community, a seismic disruption that is still playing out. Many practitioners — including in the fingerprint community — embraced the criticisms of the NAS and quickly set on a course to shore up their practices. Others, like the forensic dentists who continue to peddle bite-mark analysis, were defiant, claiming that their practices were invaluable and reliable — notwithstanding more than 30 wrongful convictions based on bite-mark evidence.

It was amid this backdrop that the Obama administration got to work. In 2013, the Department of Justice formed the National Commission on Forensic Science to “enhance the practice and improve the reliability of forensic science.” In February 2016, at the annual meeting of the American Academy of Forensic Sciences, then-Deputy Attorney General and forensics commission co-chair Sally Yates announced that the Justice Department would be conducting a “stress test” on various disciplines performed in the FBI lab as a means to ensure the “public’s ongoing confidence in the work we do.”

Some six months later, PCAST issued its report. Its conclusions were in line with the NAS report, but PCAST was more blunt about the need for rigorous scientific testing of pattern-matching practices: “Without appropriate estimates of accuracy, an examiner’s statement that two samples are similar — or even indistinguishable — is scientifically meaningless: It has no probative value and considerable potential for prejudicial impact.”

The pushback, even within the Obama administration, was swift. Attorney General Loretta Lynch suggested that the Justice Department would ignore PCAST’s conclusions; the FBI balked, saying the conclusions were overbroad. A crime lab industry trade and lobbying group claimed that members of PCAST were biased. The National District Attorneys Association made wild-eyed claims that seemed to miss the point of the report entirely, including that the maligned forensic practices were “reliably used every day” and the recommendations for reform were “scientifically irresponsible.”

“It’s like arguing that because my airplane doesn’t have wings, it’s immune from the laws of thermodynamics.”

As it turned out, the prosecutors and industry groups had little to fear. The momentum toward reform was stopped in its tracks when Trump assumed office and tapped Sen. Jeff Sessions to take over as attorney general. A former prosecutor, Sessions had made his position clear when responding to the NAS report back in 2009, with a bit of his own misleading language. “I don’t think we should suggest that those proven scientific principles that we’ve been using for decades are somehow uncertain,” he said.

Sessions quickly put an end to the National Commission on Forensic Science and installed Kansas City, Missouri, prosecutor Ted Hunt as the head of a mysterious forensics working group that never appeared to do much at all. The planned FBI stress test never happened. Trump didn’t bother to appoint a director of science policy until nearly two years after taking office (he appointed a meteorologist), and he didn’t enlist PCAST until November 2019; in all, the group met just four times.

Of course, to say that the Trump administration did nothing on forensics isn’t entirely true. On January 13, the Justice Department posted a 26-page statement responding to the 2016 PCAST report. While there is no author attached, it reflects statements that Hunt, Sessions, and other critics of reform have previously made. (The Justice Department did not respond to questions about who authored the statement and whether it was reviewed by experts either inside or outside the department.)

The critique, four years later, asserts that pattern-matching practices are based on subjective eyeballing of evidence by technical experts and as such don’t belong to the branch of science known as metrology (the study of measurement). That’s just fine, the statement argues, and shouldn’t have any bearing on whether the techniques are admissible in court.

“The argument is that because [forensic practitioners] take no measurements — a fundamental tenant of science — the PCAST critique is irrelevant because pattern matching techniques are not part of metrology; eyeballing the evidence is good science, in other words,” Chris Fabricant, director of strategic litigation at the Innocence Project, wrote in an email to The Intercept. “It’s like arguing that because my airplane doesn’t have wings, it’s immune from the laws of thermodynamics.”

Ultimately, Fabricant wrote, posting the statement just seven days before the end of the Trump presidency sends a singular message: “It seems an effort to draw a line in the sand on the way out the door: Progress stops here.” 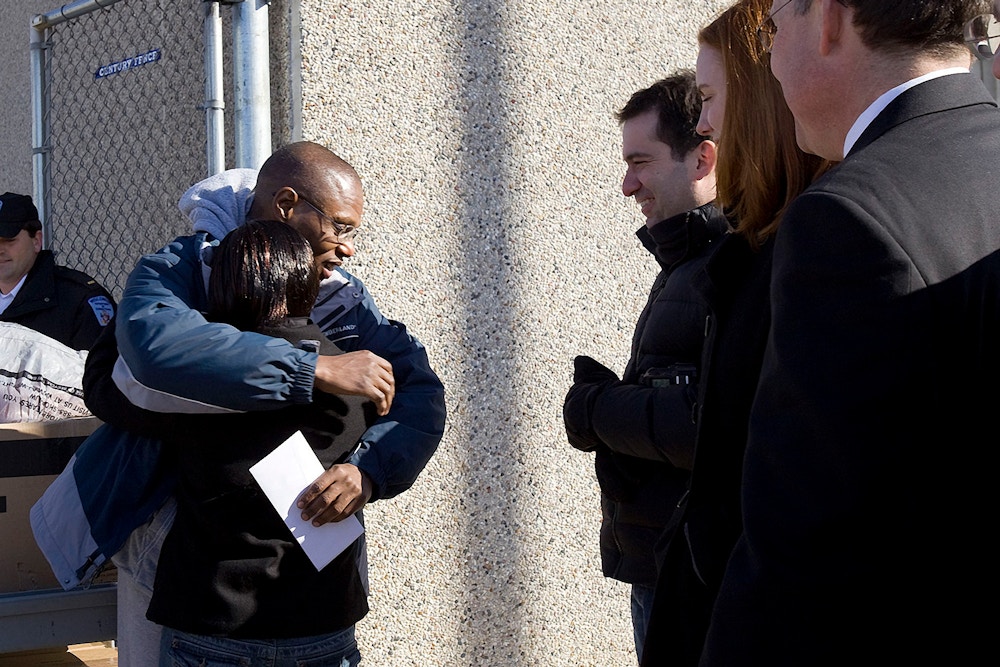 Robert Lee Stinson hugs his sister on Jan. 30, 2009, in New Lisbon, Wis., as attorneys from the Wisconsin Innocence Project look on. Stinson was exonerated after serving more than 20 years in prison based on flawed bite-mark evidence.

The Cost of Faulty Forensics

In addition to heading up the Office of Science and Technology Policy, Lander was also nominated to serve as presidential science adviser, which Biden is elevating to a Cabinet position. In a three-page letter to Lander, Biden laid out five broad questions that he’d like his science advisers to address in order to ensure a “healthier, safer, more just, peaceful, and prosperous world.” While there are certainly pressing matters to focus on — the pandemic, the climate crisis — reforming forensics would fit within the goals that Biden has expressed.

Indeed, as a member of the Innocence Project’s board of directors, Lander no doubt understands the human cost of continuing to use faulty forensic practices.

To date, flawed forensics have led to hundreds of wrongful convictions. Roughly a quarter of the more than 2,700 cases in the National Registry of Exonerations involved faulty or misleading forensic evidence; forensic errors have been implicated in about half of the more than 500 exonerations based on DNA testing.

Peter Stout, president and CEO of the Houston Forensic Science Center, one of the nation’s only independent public sector crime labs, says the challenges around forensic science are nuanced and include the fact that forensics have never had a true home in the federal government. To date, the federal government’s modest support for forensics has generally been through its law enforcement arms, which the NAS report concluded left labs and practitioners vulnerable to bias. Instead, the NAS suggested that a “new, strong, and independent entity” should be created that could help with standards, research, and funding for the nation’s disaggregated forensics community.

That hasn’t happened, but Stout says he’s encouraged that with “legitimate scientists” being appointed to Biden’s administration, there may come an “opportunity for a realistic discussion about what really is going to have to happen and the number of dollar signs that go with that.”

In addition to Lander, Biden has tapped other renowned scientists to head up his administration’s efforts to inject science into the major policy decisions ahead, including Alondra Nelson, president of the Social Science Research Council and a professor at the Institute for Advanced Study, who was nominated to become deputy director for science and society at the Office of Science and Technology Policy.

“Sound science will touch every aspect of what the Biden Administration does — from new policy, to addressing social inequality, to the implications of new technologies,” Nelson posted to Twitter on January 15. “Inclusive and trustworthy science will have a place in government.”

Quick to respond was C. Michael Bowers, a forensic dentist in California who was among the first to sound the alarm about problems with his colleagues’ bite-mark analysis. He has since become an outspoken critic of the practice and has worked to exonerate people convicted on the basis of bite-mark evidence. “Please work unreliable forensics into your agenda,” he wrote. “It will save lives.”