RIP Rush Limbaugh, Who Spent His Entire Life on the Government Dole

The hilarious irony at the core of Limbaugh’s life was that his career and wealth were a handout from the U.S. government. 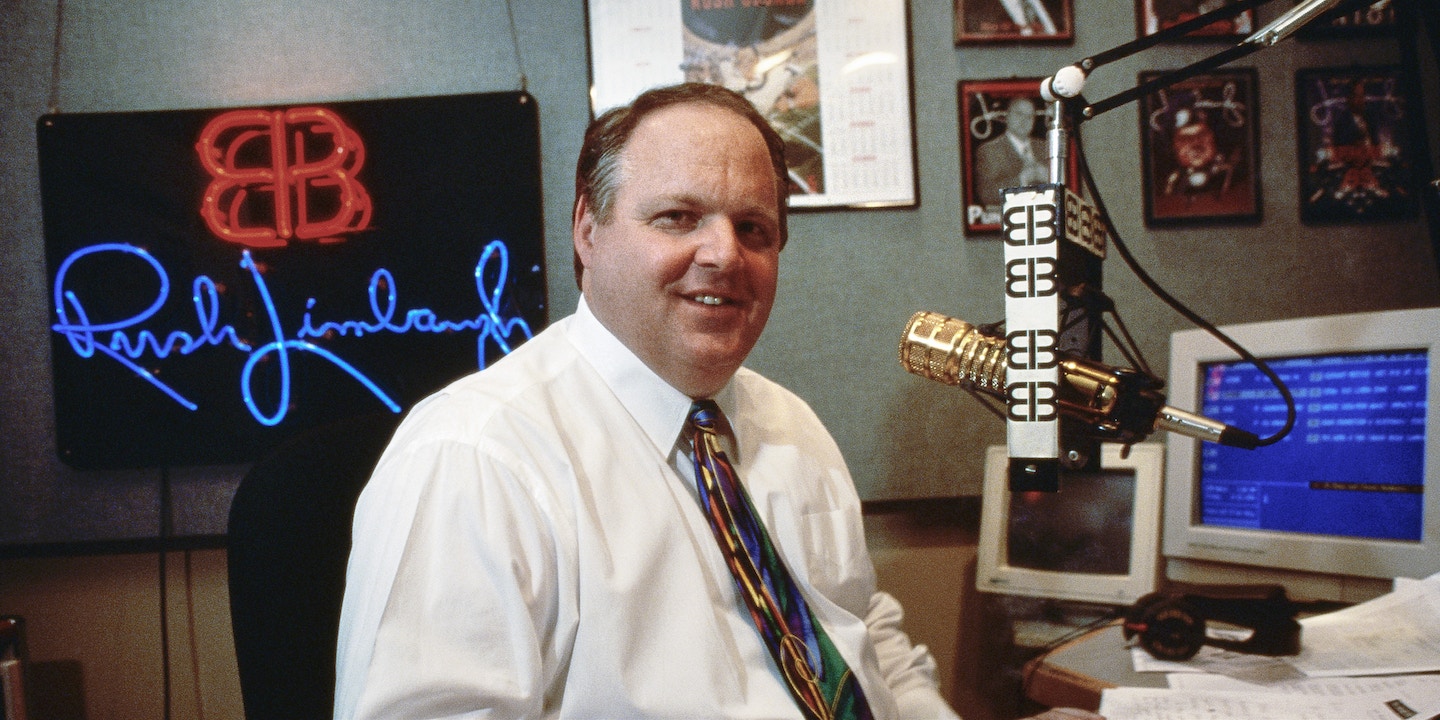 After Rush Limbaugh died on Wednesday, there was an outpouring of analysis of his impact on U.S. politics. He popularized a hard-right perspective on economics, celebrating the worthy wealthy and pouring scorn on the undeserving poor. Along the way, he amassed a personal fortune in the hundreds of millions of dollars.

What’s gotten no attention, however, is the hilarious irony at the core of Limbaugh’s life: His career and wealth were a handout from the U.S. government.

This is because Limbaugh was a radio broadcaster. The section of the electromagnetic spectrum used for radio is an extremely valuable resource, and different stations in the same area can’t broadcast at the same frequency. This means the federal government has to regulate radio, and grant monopolies in the form of licenses to broadcast at every point on the band. And until fairly recently, the government handed out these licenses — and thereby the opportunity to exploit the radio spectrum — at essentially no cost.

This situation is equivalent to huge gold mines on public land. Imagine if the government simply gave the rights to extract the gold to corporations, and then the corporations hired a contractor to mine the gold, splitting the proceeds with them. The contractor would easily grow stupendously wealthy. But it would be a little hard to take if he constantly lectured everyone else about the nobility of the rich and the dangers of dependence on the government.

Yet this is exactly what Limbaugh did. No. 1 on a Limbaugh list of “undeniable truths”: “There is a distinct singular American culture — rugged individualism and self-reliance — which made America great.” No. 2 on the list: “The vast majority of the rich in this country did not inherit their wealth; they earned it. They are the country’s achievers, producers, and job creators.” Down at No. 27 is “Our cities have not been neglected, but poisoned with welfare dependency funds.”

Limbaugh returned obsessively to these themes for decades, turning them into common sense in the minds of his listeners. “There will always be poor people,” he said, and “this is not the fault of the rich.” He proclaimed constantly that the super-wealthy are not under-taxed, but woefully over-taxed. (The misleading statistics he used are one of the right’s favorite lies.)

For Limbaugh, all of this was a deeply felt issue of morality. “The rich, as you know, are under assault,” he explained. “They are maligned, criticized, ridiculed, impugned, and instead they ought to be held out and up as the role models.” Meanwhile, “There’s no question we have a dependent class in this country, and it’s growing. … These are people who have had their futures taken away from them.”

Limbaugh’s own dependency on the federal government had its roots in the Communications Act of 1934. At the time, radio was a thrilling new invention, much like the internet in the 1990s. Idealists saw it as opening vast new possibilities for public education and edification, and tried to amend the act so it would reserve 25 percent of the spectrum for nonprofit organizations. Corporations had a different view, which was that they should be given the radio spectrum so they could commercialize it and make as much money as possible.

The idealists lost when the Senate rejected their amendment. A previous 1927 bill had stated that each radio station “must be operated as if owned by the public. … It is as if people of a community should own a station and turn it over to the best man in sight with this injunction: ‘Manage this station in our interest.’” The 1934 Act downgraded this language to require that stations should operate for the “public interest, convenience and necessity.” What this meant was largely unspecified, and in any case would almost never be enforced.

Instead, most of the radio spectrum was simply handed over to corporations, for fees so low that it might as well have been free. The broadcast industry then predictably consolidated, especially since it was largely impossible for companies to lose their licenses. Sixty years after the 1934 Act, the Federal Communications Commission did start auctioning off available radio spectrum, but there has always been exceedingly little to auction. All of Limbaugh’s main stations appear to have acquired their licenses decades before the auctions were established.

This government dole made Limbaugh incredibly rich. In 2008, he signed a contract with Clear Channel Communications paying him $400 million over eight years. In 2018, he made $84.5 million. He lived in a Florida mansion worth $50 million and had a net worth at the end of his life estimated at $600 million.

In fairness to Limbaugh, he did work his radio gold mines with skill and verve. In a fairer world, he could have accumulated perhaps 1 percent of his wealth. It is also the case that he is by no means unique. Other radio hosts, the stars and creators of hit broadcast TV shows, professional athletes, corporate media executives — all have grown extraordinarily rich, thanks to the government’s giveaway of the electromagnetic spectrum.

But few have had the gall to gobble down so much public wealth while simultaneously berating the public about their failures and laziness. Hopefully in the future Limbaugh will be remembered not just for the stones he threw, but the fact that he threw them while living in the world’s biggest glass house.