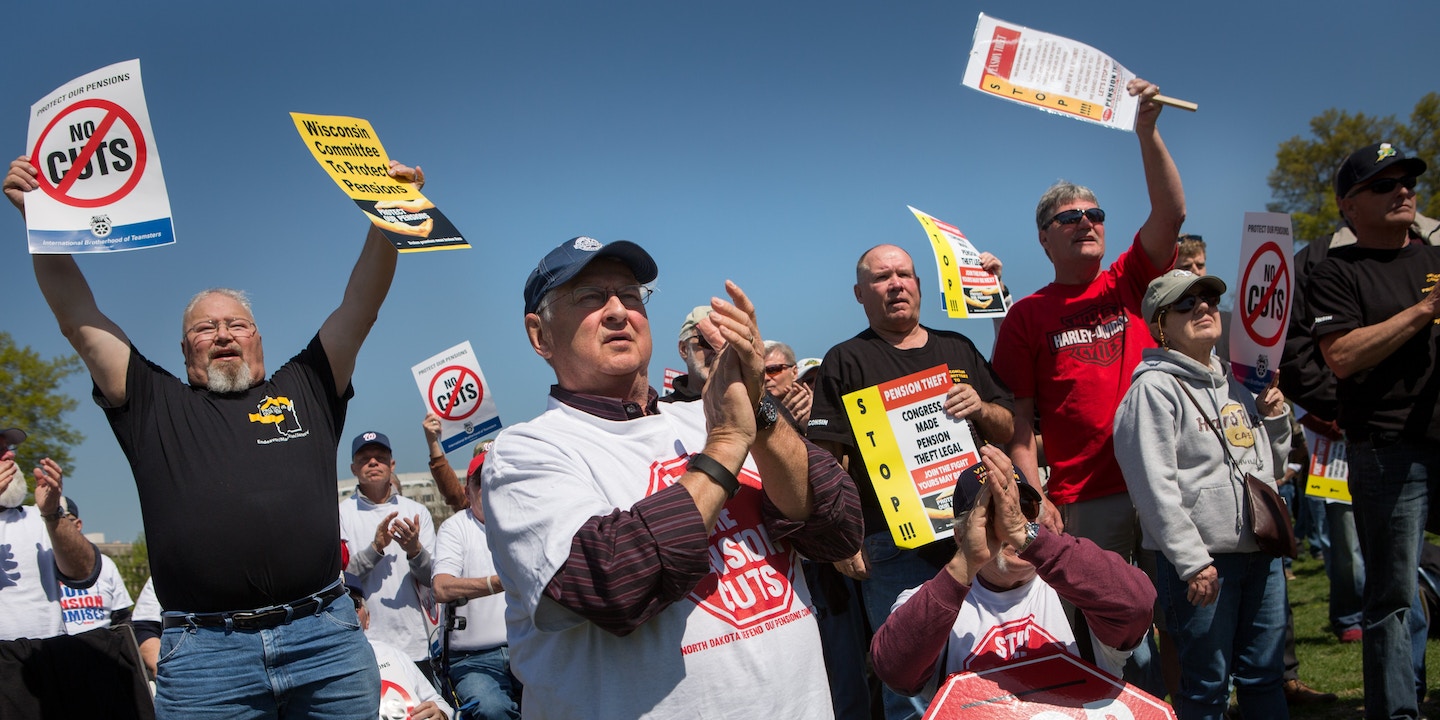 Tucked into the American Rescue Plan — the coronavirus stimulus that passed in early March — is the greatest victory for American workers in recent memory: the Butch Lewis Emergency Pension Plan Relief Act. The law constitutes a massive rescue for the 10 million members and retirees of oft-underfunded labor-management multiemployer pension funds, which in recent years have threatened dramatic cuts for hundreds of thousands of pensioners and reduced, sometimes substantially, the benefits of tens of thousands.

Now those 10 million workers will see their benefits protected for, at minimum, the next 30 years. Pension funds that had already cut benefits for their members will pay back workers the amount that they were cut, with some retirees expecting checks in excess of $15,000. The result is an affirmation of the right to a secure retirement, arguably the biggest win for labor in Congress since the passage of the Family and Medical Leave Act in 1993.

Wall Street-driven changes in the economy and in pension fund investment management have devastated the funds in recent years, as private equity-backed companies have gone bankrupt and stopped their contributions to the funds and pension funds have loaded up on risky new strategies in foreign stocks, active management, real estate, and private equity. While a systematic study of multiemployer fund performance has not been done, the Center for Retirement Research at Boston College found in 2018 that public sector pensions had lost out on $600 billion worth of returns due to Wall Street-driven risky investment.

The new bill — named after pension activist Butch Lewis, who died early in the campaign — was the product of an eight-year fight that began in 2013, when the 400,000-member Central States Pension Fund began signaling that it thought that the law needed to be changed to allow cuts to maintain solvency. The fund, in conjunction with labor leaders from the Teamsters and Building Trades unions, launched a lobbying organization called “Solutions Not Bailouts.” The group advocated for a fundamental change to retirement law in the U.S., enshrined in the 1974 Employee Retirement Income Security Act, or ERISA, which mandated that accrued benefits could never be cut.

Pension funds seeking to cut benefits for their members may seem odd, but one thing that helped to explain the Central States’ role was that it was under a federal consent decree due to mob influence at the fund in the early ’80s. The consent decree assigned a judge to oversee the pension fund, who in turn had assigned a series of Wall Street banks to manage the funds’ assets, as opposed to an elected board of labor and management trustees. Then, during the 2008 financial crisis, the fund withstood massive losses, putting it in the bottom 10 percent of pension funds. Goldman Sachs and Northern Trust, which jointly managed the fund’s assets, had collected $31 million in fees between 2009 and 2013 to deliver such stellar performance.

Solutions Not Bailouts won inclusion of the language allowing cuts in the controversial “Cromnibus” bill in 2014 after Rep. George Miller, the top Democrat on the House Education and Workforce Committee overseeing pensions, pushed for the change.

“We earned those pensions and were promised them and they wanted to take it away from us without warning because of a stroke of the pen in the middle of the night,” said Mike Walden, the president of the National United Committee to Protect Pensions and a retired Teamster.

Retired Teamsters advised by the pressure group Teamsters for a Democratic Union and the advocacy group Pension Rights Center organized committees in over 65 different cities across the country under the banner of the National United Committee to Protect Pensions. From those committees, they organized a rally with 4,000 participants at the Capitol in 2016 and bombarded Congress with calls, letters, emails, and in-person visits for the next five years. Up until the coronavirus pandemic began, NUCPP members were a near constant presence in the Capitol bird-dogging members of Congress and their staff.

“I started a small committee here in Akron [Ohio] at the request of Teamsters for a Democratic Union in 2014,” Walden said, as TDU was sending warning signals that cuts were on the horizon. New organizing committees of retirees to defend pensions popped up across the Midwest and began to spread across the country.

In the face of potentially devastating cuts, the movement spread like wildfire, said Ken Paff, TDU’s national organizer. “You know a movement has taken off when committees are forming without anybody knowing,” said Paff. “Wait, there’s a committee in Houston? And they organized a meeting with hundreds of people?” After TDU had raised the initial alarm, Paff said “The movement took on its own life.” Paff noted that TDU had been organizing around pensions for three decades, but it wasn’t until the threat of the cuts came through that there was mass participation.

After the pandemic started, the NUCPP committees kept up the pressure, emailing and calling their members of Congress, and volunteering to help defeat Donald Trump, who in conjunction with Senate Republicans had refused to take action on the issue. NUCPP members in Georgia were active in the campaign to elect Raphael Warnock and Jon Ossoff. The commitments that NUCPP members had nailed down from Democratic senators over the years paid off, as Sen. Sherrod Brown, D-Ohio, ensured the inclusion of the Butch Lewis Act in the final American Rescue Plan language. 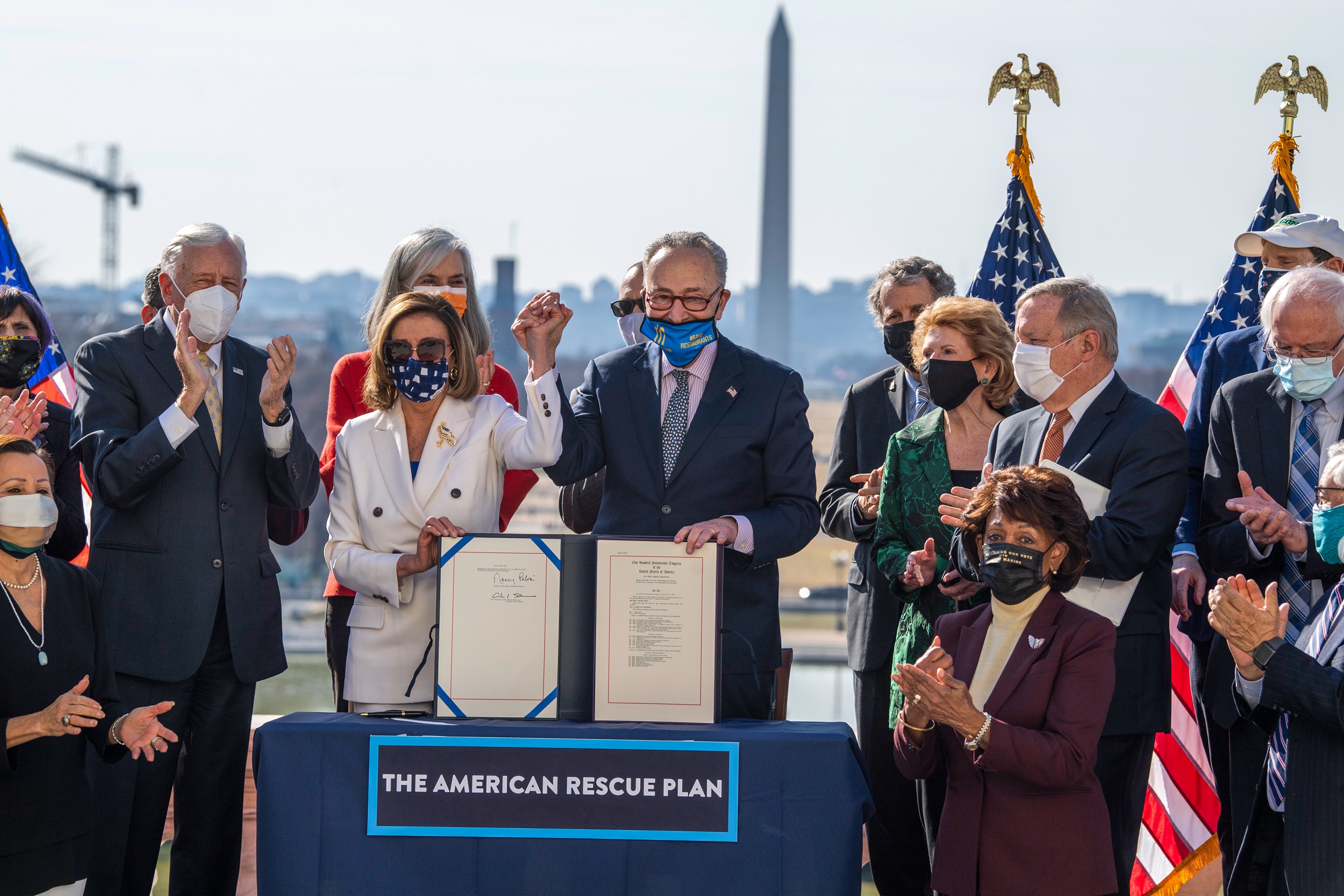 Speaker of the House Nancy Pelosi, D-Calif., and Senate Majority Leader Chuck Schumer, D-N.Y., celebrate signing the American Rescue Plan Act at a bill enrollment ceremony on the West Front of the Capitol after the House passed the $1.9 trillion coronavirus relief package in Washington, D.C., on March 10, 2021.

The rescue doesn’t include any deeper look at what created the multiemployer crisis to begin with, however. The combination of the declining power of labor and the financialization of the economy wreaked havoc for the Central States fund in particular as employers stopped making contributions to the fund and risky Wall Street investment strategies led it to market-trailing returns.

“Goldman Sachs & Northern Trust got $41M to manage workers’ pension funds, & they recklessly gambled it on junk bonds & toxic mortgages,” Sen. Elizabeth Warren said in an April 2016 tweet. A 2018 investigation into the plan’s investment management by the Government Accountability Office soft-pedaled Goldman’s role, declining to investigate Goldman’s decision to have the fund purchase $43 million in Goldman stocks and bonds or substantively investigate the funds’ poor performance in the financial crisis. The attention did help the fund move to a more prudent portfolio management strategy focused on blue-chip stocks and bonds.

While the Central States fund had kept away from high-risk, high-fee assets like private equity and hedge funds, many other multiemployer pension funds have invested heavily into that space. “Multiemployer plans have suffered under the weight of high fee investments like private equity and hedge funds, as well as conflicted asset managers like Goldman Sachs and Northern Trust, as exemplified by the Central States fund,” said Jay Youngdahl, a labor lawyer who sits on the board of several multiemployer plans.

The Butch Lewis Act does require that federal distributions into the underfunded pensions must be invested in low-risk investment grade bonds. But it doesn’t stop the funds from making new investments in high-risk strategies like private equity and hedge funds from employer contributions — even though those investments are highly illiquid, preventing funds from having free cash in case an emergency comes up.

“Butch-Lewis is a huge victory for pensions but it can’t come at the expense of much-needed scrutiny of Wall Street investment firms,” said Youngdahl.

The Pension Benefit Guaranty Corporation, which is currently headed by Gordon Hartogensis, Mitch McConnell’s brother-in-law, has been notoriously reticent to investigate the investments made by underfunded and failing pension plans. Two of McConnell’s top five contributors from 2015 to 2020 were employees of the Blackstone Group and KKR, private equity firms which collect enormous fees from pension funds, according to data collected by Opensecrets.org.

“The regulators have never been around to look at the high fees and performance issues in these plans,” added Chris Tobe, a financial analyst and former public pension trustee in Kentucky.

But for now, the retired Teamsters are basking in victory. Their pensions are safe, at least for another 30 years. “Right now we’re just happy and dancing that something got done, after eight years,” said Walden, the NUCPP president.

“To say that we are ecstatic is an understatement,” said Karen Friedman, the Pension Rights Center’s executive director. “We have worked with grassroots activists and allied organizations for eight long years to push for a solution to the multiemployer crisis and we are now breathing a long sigh of relief that finally, finally Congress has acted to save their promised benefits.”