“This subpoena is outrageous and strikes at the heart of the First Amendment. It should be thrown out immediately.” Last week, members of the nonprofit news organization Unicorn Riot received a subpoena from the pipeline giant Energy Transfer seeking a wide range of documents, including newsgathering materials that would identify sources. The subpoena is part of an aggressive, yearslong legal effort launched by Energy Transfer in the wake of the Standing Rock movement, when thousands of opponents of the corporation’s Dakota Access pipeline came to camps at the border of the Standing Rock Sioux reservation in an attempt to stop pipeline construction and protect the tribe’s drinking water from contamination.

Through a series of expensive conspiracy lawsuits against a disparate range of actors, the pipeline company has sought to paint the Standing Rock movement as the product of a vast misinformation-driven conspiracy to damage Energy Transfer.

Now, as part of that effort, Energy Transfer is demanding Unicorn Riot turn over virtually any documents, video footage, audio, article drafts, and communications related to the firm and its pipeline. The subpoena also sought information about the nonprofit’s organizational structure, social media accounts, and names of employees, volunteers, and supporters. Niko Georgiades, who was among the Unicorn Riot reporters covering Standing Rock, was separately subpoenaed.

“This subpoena is outrageous and strikes at the heart of the First Amendment. It should be thrown out immediately.”

“This subpoena is outrageous and strikes at the heart of the First Amendment,” said Trevor Timm, executive director of the Freedom of the Press Foundation. “The breadth of the subpoena is striking: not only encompassing things like story drafts and internal communications, but also the personal information of Unicorn Riot’s donors. The judge should see this for what it is: a menacing attempt to intimidate a news outlet whose only ‘crime’ is being critical of the company. It should be thrown out immediately.”

Unicorn Riot signaled it would contest the subpoena. “We intend to vigorously defend our sources and our First Amendment protected activity,” Unicorn Riot told The Intercept in a statement. (Energy Transfer did not respond to a request for comment.)

Over the course of months of protests at Standing Rock, Unicorn Riot developed a reputation for its immersive livestreams, video news reports, and public information requests, which provided powerful evidence of the aggressive tactics used by law enforcement agencies and Energy Transfer. The organization’s work leans to the left politically and tends to be critical of law enforcement agencies, with journalists often reporting from within movement spaces. At Standing Rock, law enforcement officials at times viewed the group’s journalists as members of the movement, subjecting them to repeated arrests as well as “less than lethal” weapons.

Unicorn Riot has fewer than a dozen members and is entirely supported by private donations from individuals who seek out their coverage of social movements and protests. (Disclosure: Sam Richards, one of the authors of this story, has written for Unicorn Riot as a freelance journalist on matters unrelated to pipeline protests.) Energy Transfer, meanwhile, reported nearly $5 billion in revenue in 2019 and has somewhere in the neighborhood of 13,000 employees.

Fighting back will be an immense financial burden for a tiny organization like Unicorn Riot. The group has launched a fundraiser to pay for a First Amendment lawyer.

Critics say the toll exacted by fighting legal attacks is exactly the point of what Energy Transfer is doing.

The Unicorn Riot notice was just one of a slew of subpoenas related to Energy Transfer’s case over the last month to a wide range of individuals and groups who were involved in the Standing Rock movement. Among them were legal collectives, groups that provide nonviolent direct-action trainings, and Standing Rock tribal officials.

The Water Protector Legal Collective, which also received an Energy Transfer subpoena, described the subpoenas as part of a set of tactics “designed to bury organizations in litigation and force organizations to spend precious resources, time, and energy defending against corporations.”

Energy Transfer “is on a fishing expedition for information that could lend credence to their ill-founded notion that nonprofit organizations and Water Protectors seeking to protect human rights and the earth for future generations were allegedly engaged in illicit activity,” said staff attorney Natali Segovia in a statement. “In reality, it is ETP and large corporations that break the law with impunity.” 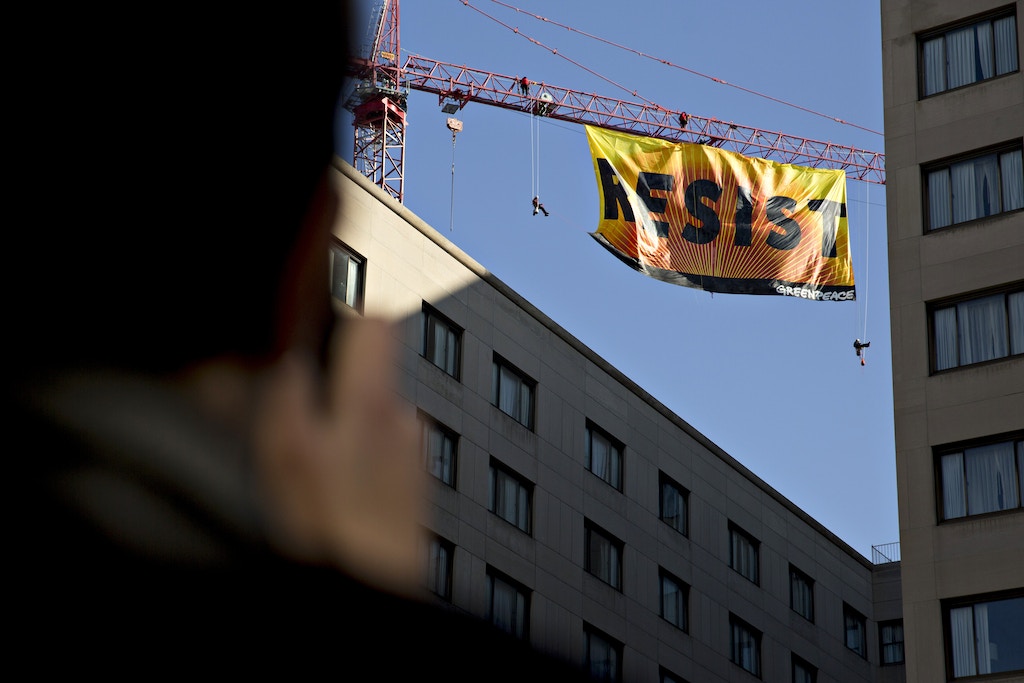 Greenpeace activists, protesting ongoing pipeline construction, hang from a construction crane with a banner that reads “Resist” in Washington, D.C., on Jan. 25, 2017. The protest comes one day after the Trump administration invited TransCanada Corp. to reapply for its Keystone XL project and issued a memorandum supporting completion of Energy Transfer’s Dakota Access pipeline.

The subpoenas are part of a follow-up effort to a sprawling federal racketeering lawsuit Energy Transfer filed in 2017 against a range of defendants, including the environmental group Greenpeace; BankTrack, which is a nonprofit that pressures banks to stop financing harmful activity; and several individual pipeline opponents.

The federal complaint alleged that thousands of people came to camps at the border of the Standing Rock reservation because of a Greenpeace misinformation campaign. Widespread evidence, including a robust public record, show that water protectors instead were galvanized by calls for help made by tribal members and the publication of shocking footage showing Dakota Access pipeline security contractors siccing dogs on pipeline opponents.

Energy Transfer claimed it sustained $300 million in damages, a total that could translate into triple the penalties — nearly $1 billion — under the federal law called the Racketeer Influenced and Corrupt Organizations Act, known as RICO.

“The suit was brought to chill Greenpeace’s speech, drain our resources, and intimidate anyone who speaks out against pipeline projects.”

The legal effort has been labeled a SLAPP suit by Greenpeace, short for “strategic lawsuits against public participation.” The SLAPP designation refers to efforts designed to silence a powerful plaintiff’s critics by using the legal system to drain them of resources. The goal is not solely to win the lawsuit but to force a corporation’s political adversaries to hemorrhage money, time, and morale through relentless legal filings. In response to repeated SLAPP suits targeting Greenpeace and others, a task force called Protect the Protest launched in 2018.

Exactly a week after the dismissal, Energy Transfer filed a new complaint against Greenpeace in a local North Dakota district court. The new case basically repackages the old complaint without the federal RICO claims, adding instead allegations of trespassing and other property-based claims. Named alongside Greenpeace is the Red Warrior Society, which occupied an encampment of pipeline opponents that supported obstructive direct-action protests, Greenpeace organizer Charles Brown, and water protectors Cody Hall and Krystal Two Bulls.

“The suit was brought to chill Greenpeace’s speech, drain our resources, and intimidate anyone who speaks out against pipeline projects,” said Greenpeace deputy general counsel Deepa Padmanabha. “We’ve been fighting this SLAPP suit for many years, and we’ll continue to fight this battle because it’s important for all individuals and groups engaged in advocacy work.”

In the latest iteration of Energy Transfer’s legal attack, the corporation issued several subpoenas in recent weeks to individuals who are not defendants in the case. Among those subpoenaed are groups that provided legal services to people facing criminal charges during Standing Rock, including the Water Protector Legal Collective and the Freshet Collective. The Ruckus Society and Indigenous Peoples Power Project, which both promote nonviolent direct action, were also subpoenaed. And so were officials involved in inspecting the pipeline route on behalf of the Standing Rock Sioux Tribe, including Dr. Kelly Morgan, an archeologist for the tribe, and Tim Mentz, the tribe’s former tribal historic preservation officer, who submitted key testimony in a case arguing that the pipeline would harm culturally significant sites.

In an objection to its subpoena, the Water Protector Legal Collective noted that it has provided legal support in more than 800 criminal cases and argued that the subpoena is “seeking the records of a legal organization akin to a law office, including communications by, between and among WPLC-associated attorneys, WPLC staff and its clients.” The group said the subpoena was “an assault by Energy Transfer and Dakota Access upon the attorney client-privilege itself” and “a fishing expedition.”

The Water Protector Legal Collective subpoena even requested communications with members of the press. “This is a clear attempt to inhibit communications by an advocacy organization with the press in violation of WPLC’s first amendment rights under the U.S. Constitution,” the collective said in its objection.

Mentz and Morgan, for their part, have objected to the subpoena on the grounds that the documents Energy Transfer is demanding are the property of the Standing Rock Sioux tribe, which is protected from such third-party subpoenas by sovereign immunity.

Unicorn Riot has been forced to dedicate a sizable portion of its limited resources to deciding how to handle the sweeping subpoena, even as the group maintains round-the-clock coverage of the murder trial of former Minneapolis police officer Derek Chauvin, who killed George Floyd last summer and sparked a nationwide protest movement. “We are committed to bringing you hard hitting journalism and will not bow to attempts to intimidate or interfere with our reporting,” the organization stated on its new legal defense fund page.