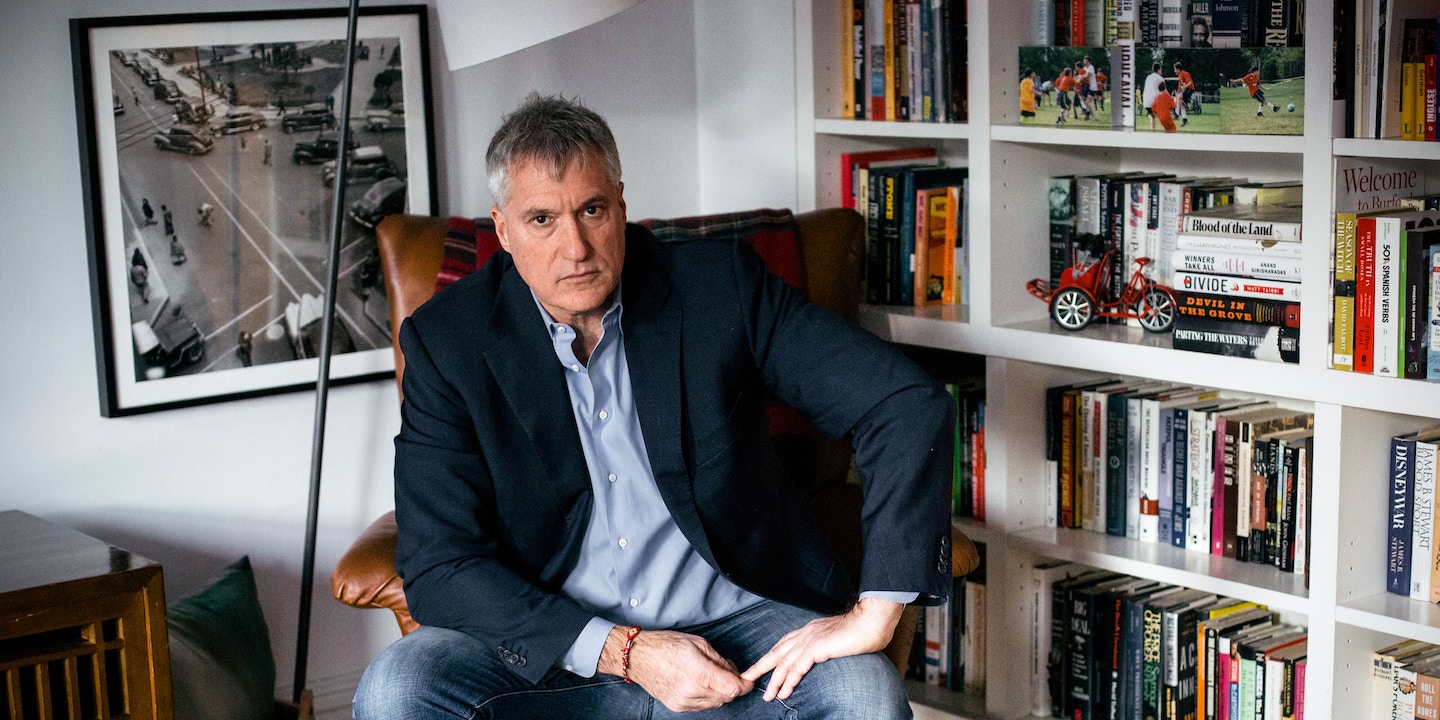 On Day 608 of his house arrest, Steven Donziger was pacing in his kitchen. Spring was springing outside the window of his Upper West Side apartment, where the temperature had just shot up into the 60s. Nearby, Central Park was filling with picnickers and people tossing Frisbees. But Donziger, the attorney who won an $8.6 billion judgement against Chevron over toxic oil waste in Ecuador, wouldn’t be joining them. Although the criminal contempt charge for which he will soon face trial — which stems from his refusal to hand his computer and cellphone over to the court in 2019 — is a misdemeanor that carries a maximum sentence of six months and Donziger has already spent almost 20 months confined, he still cannot leave his apartment.

“I’m a prisoner in my own home,” he said, as he toasted himself a pumpernickel bagel for lunch. “There has never been a lawyer without a criminal record in the federal system who has been detained for even a day pretrial for a misdemeanor.” Donziger said that his left ankle, on which an electronic monitor has been strapped since August 2019, is chafed, and that his family members, including his 14-year-old son, have suffered immeasurably from the ordeal. “I remember the very first day he came home and I had to tell him,” he said. “And I remember saying this is only going to be a couple of weeks until I can sort this out.”

Donziger wasn’t being naive to think his house arrest wouldn’t last. No other lawyer had been subjected to this treatment before. And the Southern District of New York had already declined to prosecute the contempt case against him. The decision of the judge, a former corporate lawyer whom many of Donziger’s supporters have accused of being biased in favor of Chevron, to appoint a private firm to prosecute the case already seemed extraordinarily harsh and punitive. Yet almost two years later, the device remains affixed to his body and foremost in his mind. “It sort of permeates my existence, sleeping, eating bathing,” he said. “It’s designed to psychologically demoralize.”

As this latest installment in the bitter battle between Donziger and Chevron drags on, it can seem that the oil giant has succeeded in its long-term goal of demonizing the human rights lawyer, which the company and its allies laid out in 2009. The 2011 judgment of the Ecuadorian court over pollution of the Lago Agrio region of country might have finally put an end to what was already an epic legal struggle. But Chevron refused to pay the judgment or clean up the toxic mess in Ecuador — and instead removed its assets from the country.

Chevron, which is valued at more than $200 billion, also invested some of its massive resources in a legal counteroffensive against Donziger. Led by the law firm Gibson Dunn, the company’s hot pursuit of the attorney has involved hiring private investigators to track him, creating a publication to smear him, and creating a team of hundreds of lawyers to fight him. As a result, Donziger, who spent decades fighting for Indigenous communities and farmers grappling with the pollution resulting from oil extraction, now faces exorbitant fines and legal costs. He has also lost his passport, his income, his law license (though he’s fighting the decision), and his freedom. And, depending on what happens at a trial scheduled for May 10, he may face up to six months in prison. Steven Donziger shows his ankle monitor at his home in New York on January 15, 2020.

Photo: Annie Tritt for The Intercept

Yet the campaign against Donziger is so brutal and unusual it may ultimately backfire on both the oil giant and the law firms that represent it. The pointed attacks on an individual who was fighting against environmental injustice have drawn the attention of attorneys, scholars, human rights organizations, and climate activists, who are discovering not only Chevron’s penchant for revenge but also its history of refusing to take responsibility for the environmental devastation wrought during oil extraction. The irony is not lost on Donziger.

“Because of their behavior, the support I’ve gotten around the world has expanded explosively,” he said. “Millions of people are now learning about this case and Chevron’s abuse of the Ecuadorians who otherwise would not have known about it.”

Tim Hirschel-Burns, a second-year student at Yale Law School, is one of them. Hirschel-Burns, a member of Law Students for Climate Accountability, found out about Donziger’s house arrest in an article that ran in The Intercept in January 2020. “I remember reading that and thinking this can’t be true,” he said. But his research into the case confirmed that Chevron and Gibson Dunn had personally targeted the lawyer after Donziger’s team won in Ecuadorian court. “I found it wild that Chevron could withdraw its assets from Ecuador and not pay anything.”

Now he and others in the group are launching a campaign to get law students around the country to renounce Gibson Dunn for its representation of Chevron in Ecuador and in the litigation against Donziger, as well as for its larger role in the climate crisis. “Gibson Dunn does fossil fuel work on a ton of extremely objectionable projects,” said Hirschel-Burns, who pointed to the law firm’s work on 18 legal cases in which they represent climate polluters or clients who otherwise exacerbate climate change, such as Dakota Access LLC, the company behind the Dakota Access pipeline. Based on that litigation and the firm’s lobbying on behalf of Koch Industries, the student group gave Gibson Dunn an “F” on its climate change scorecard it issued in March. Protesters, some in traditional Ecuadorian dress and with black hands representing oil, demonstrate against the Chevron Corporation in front of a U.S. courthouse in New York, N.Y., on Oct. 15, 2013.

Today, Law Students for Climate Accountability sent Gibson Dunn a letter asking it to commit to a publicly available ethical standard for its fossil fuel work. “They need to tell us what they would not do for profit,” said Hirschel-Burns. “What is the line they would not cross?”

The law students are also calling out Gibson Dunn’s strategy of shifting its firepower from the environmental case to the individual lawyer presenting it — a tactic that has the power to chill their own ability to represent corporate polluters in the future. “Gibson Dunn’s strategy says we’re going to ruthlessly and frivolously beat down any community or lawyer representing a company that has the gall to take on our clients,” said Aaron Regunberg, another member of Law Students for Climate Accountability. “This suggests that, as lawyers, we can be opening ourselves up to attack.”

Regunberg, who is in his second year at Harvard Law School, noted that the company doesn’t highlight this part of its work when trying to hire young applicants. “When Gibson Dunn does a recruitment event, on their PowerPoint, they’re not talking about, ‘Oh, we masterminded this strategy of going after our opponent’s counsel,’” he said. “They talk about the tiny slice of the pro bono stuff they do. They make it sound like a prestigious thing that’s in line with whatever your worldview is.”

Regunberg hopes that bringing the firm’s objectionable behavior into the light will taint Gibson Dunn to the point where attorneys will be ashamed to work there — a stigma he likens to one that gradually became attached to law firms that work with tobacco companies. “There was a process of that social license being removed,” said Regunberg. “It became less and less OK to say, ‘I’m a prestigious lawyer, a good person, and representing Big Tobacco.”

The group’s campaign, which launches today with the hashtag #DoneWithDunn, follows its past targeting of Paul, Weiss Rifkind, Wharton & Garrison, which represents Exxon Mobil and other fossil fuel companies. It also comes on the heels of a recent law student boycott of another firm tied up in the Donziger litigation, Seward & Kissel. Despite having multiple ties to Chevron, that firm is now prosecuting Donziger for his contempt charge. In a successful bid to prolong his detention, the firm labeled him a flight risk.

In a February letter sent to partners in the firm, hundreds of law students took issue with the firm. “The unethical behavior of Seward & Kissel’s Chevron-linked prosecutors opens the door to future cases in which judges give private law firms the authority to prosecute the critics of multinational corporations,” the students wrote, going on to pledge that they wouldn’t consider working for the firm “until it withdraws from its conflicted position as Chevron’s private prosecutor.”

Seward & Kissel and Gibson Dunn did not respond to requests for comment. In an email, a spokesperson for Chevron, James Craig, denied that the company has anything to do with Donziger’s prosecution. “Chevron is not a party to the criminal case, did not initiate the criminal charges, and played no role in the court’s decision to charge Donziger with criminal contempt of court.  The criminal charges were brought by a federal District Court,” Craig wrote in the email, and said that “advocates for human rights do not advance human rights by violating them.” Craig also denied that Chevron withdrew its assets from Ecuador. “They were taken over by Petroecuador, which has operated the fields for nearly 30 years with an abysmal environmental record.”

Meanwhile, the relevance of Donziger’s story to the larger climate crisis has been expounded upon in a growing number of news outlets. Climate activist Greta Thunberg tweeted about Donziger’s plight. And 55 Nobel laureates have demanded that he be released from home detention and have the charges against him dropped.

The true face of Chevron and Big Oil.
Watch and share. #FreeDonziger https://t.co/RVyJp3FP9i

Some of his numerous supporters have recently reached out to Merrick Garland, the new U.S. attorney general, to request that the Department of Justice review Chevron’s attacks on Donziger. “These attacks … have led to a state of affairs widely viewed by the international human rights and environmental community as one of the most serious ongoing human rights abuses for which the United States has yet to answer,” Bob Goodfeld, the interim executive director of Amnesty International USA, and other human rights leaders wrote to Garland in February.

Despite the growing support, Donziger said he fears that he will be convicted and jailed after his May trial, which will be held without a jury. “That’s the Chevron plan. They’re going to falsely imprison me,” he said, as he was winding down yet another day inside his apartment. “It will be bad for me. And it could just make things worse for them.”