But only if Democrats stand aside and let them. 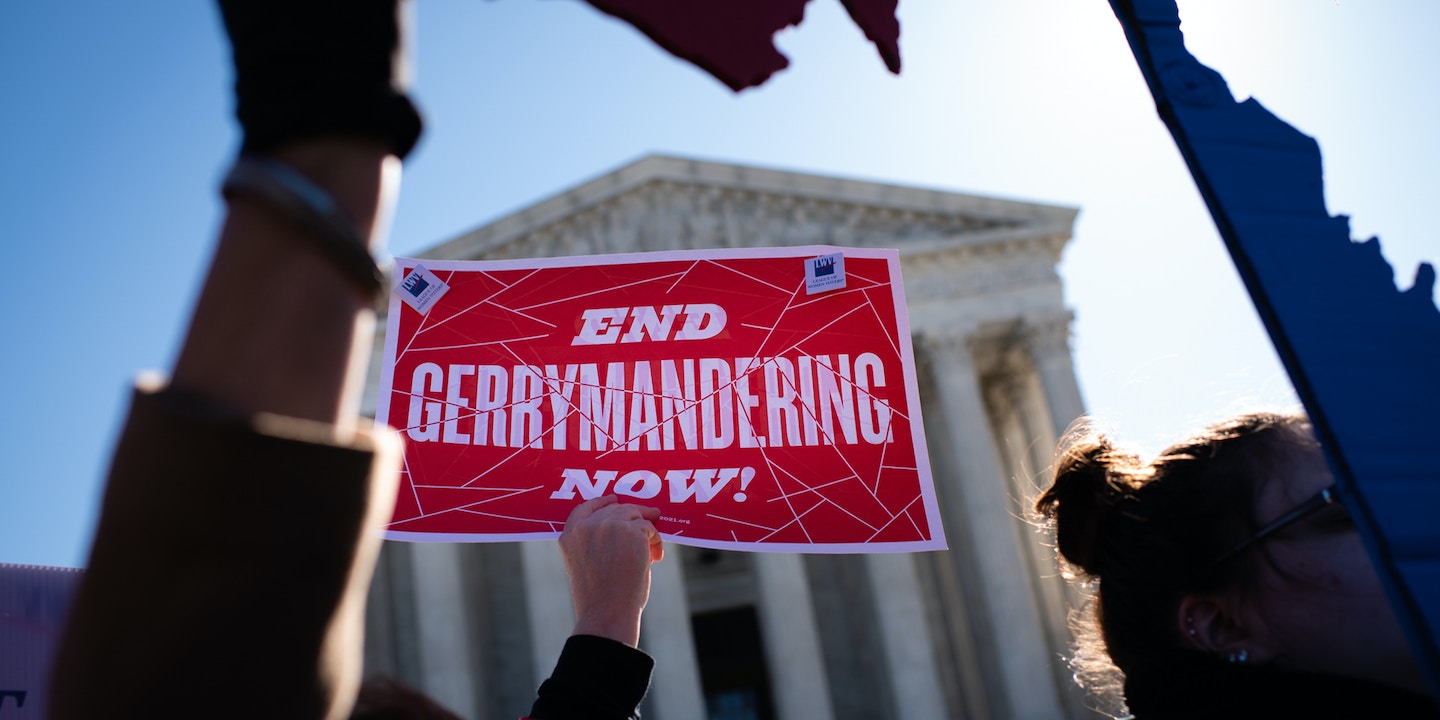 If Democrats manage to escape the traditional midterm curse and don’t drop a single vote from 2020 to 2022, they would still lose control of the House of Representatives simply as a consequence of Republican gerrymandering following the census. Unless, that is, there’s a change to current laws or an overwhelming Democratic wave on par with 2006 or 2018.

The decisive impact of gerrymandering is well understood by campaign operatives and party leaders but is barely acknowledged in national political conversations — the elephant’s weapon in the room, so to speak — even as analytic focus narrows to the details of particular voter suppression bills.

Yet Democrats are in a peculiar position: With control of both chambers of Congress and the White House, they have the opportunity to ban gerrymandering, restore a semblance of democratic balance to House races, and at the same time give themselves a fighting chance to hold on to the lower chamber. But it’s far from a guarantee that the party will do it. Democrats may choose instead to voluntarily march themselves into a political abyss for no reason other than their own inertia and lack of imagination.

The bill that could stop this, the “For the People Act,” has already passed the House of Representatives as H.R. 1. The dawning reality of the upcoming gerrymander heightens the importance for Democrats of passing the Senate version and signing it into law. To do so would require reforming the filibuster, as Senate Minority Leader Mitch McConnell has vowed to oppose the bill with everything he has. Sen. Joe Manchin, the deciding Democratic voter on filibuster reform, penned a Washington Post op-ed on Wednesday swearing that he would never vote to eliminate or “weaken” the filibuster, but a reform he suggested previously — mandating that senators actually occupy the floor in order to use it — could strengthen it as an institutional device, forcing engagement by the minority. Under current rules, as Manchin has noted, all a senator has to do to “filibuster” is send an email to a floor staffer, and everything shuts down.

Republicans’ ability to simply redraw their way into the majority comes partly as a function of their overperformance in 2020. Democrats had expected to expand their 36-seat majority, but instead they now hold just 222 seats — or they will once all the vacancies are filled — meaning that they can only lose four and hold on to a bare 218 majority.

A precise number is impossible to land on, but if gerrymandering remains legal, the best estimates suggest that if the 2020 margin remained constant in 2022, Democrats would lose at least 15 to 20 seats. In 2012, the last midterm after a census, Democrats won more than 51 percent of the House vote, yet Republicans held on to the lower chamber comfortably.

In 2012, the last midterm after a census, Democrats won more than 51 percent of the House vote, yet Republicans held on to the lower chamber comfortably.

Once the new census numbers are out — and recall that the Trump administration installed political operatives to game the count for partisan advantage — congressional seats will be reapportioned, with states that have lost relative population losing members of Congress and states that have grown getting more.

West Virginia will go from three Republicans and zero Democrats down to just two Republicans, but in the other eight states, Democrats risk losing ground. New York, depending on the final count, may in fact lose two seats. Democrats will work hard to make sure that those losses are Republican seats in the states they control, but it will be no easy task. Many of them, such as California, have independent redistricting commissions.

Texas, meanwhile, is picking up a full three seats. Republicans will hold 23 seats to Democrats’ 13 before the three new ones are added, and the Texas Legislature, dominated by the GOP, gets to redraw the lines with no input from Democrats. Republicans could plausibly pick up all three while also drawing a handful of those 13 Democrats out of their positions, flipping a 10-seat cushion to 15 or more.

Texas alone, with or without the voter suppression measures currently making their way through the state Legislature, could flip the House to Republicans, even if Democrats again win a majority of votes nationally.

Texas alone could flip the House to Republicans, even if Democrats again win a majority of votes nationally.

The same can be said for Florida, which is also picking up two new districts, and Republicans there can likely take both and knock out a few Democratic ones, netting another four seats or more.

Additional seats will likely go to Arizona, where Republicans control the redistricting process, and to Colorado, Montana, North Carolina, and Oregon. Democrats could net a seat each in Oregon and Colorado, but Montana and North Carolina are likely to go Republican, and the latter will have a chance to redraw its lines. Republicans would have a strong chance to pick up 15 or more seats among those states.

Aside from the states picking up or losing members of Congress, Republicans have other opportunities for mischief. In Kentucky, for instance, the party, which holds a veto-proof majority in the General Assembly, is eyeing the Louisville seat held by Democratic Rep. John Yarmuth since 2006, which could be redrawn to include conservative voters from northern Kentucky — though that would make nearby Republicans vulnerable. Republicans are also looking at Rep. Jim Cooper’s district in Tennessee. The Blue Dog Democrat is facing a primary challenge from Odessa Kelly, who was recruited by Justice Democrats, but it might not matter: Republicans could eliminate his seat. Republicans in Georgia, too, will be looking to blow up districts held by suburban Democrats.

Democrats, meanwhile, have a few redistricting opportunities, such as in Maryland, which could see its last Republican, Rep. Andy Harris, drawn out of a seat. Oregon, which is in Democratic hands, is likely to be able to add a Democratic seat, cramming as many Republicans into Eastern Oregon as possible.

The 2020 House election was unusual in that its outcome accurately reflected voters’ preferences. In 2012, Democrats won 51.1 percent of the House vote yet were rewarded with just 46 percent of the seats, thanks to effective Republican gerrymandering after the 2010 census. That resulted in a 21-seat gap compared to what they ought to have controlled based on their vote share. With Barack Obama’s reelection to the White House and Democratic control of the Senate, the party would have controlled all three bodies and been able to legislate in any reasonably democratic outcome. In 2014, the gap was 18 seats, and in 2016, it was 23. That year, Democrats won 49.8 percent of the vote yet claimed just 45 percent of the seats.

In 2020, Democrats won 51.3 percent of the vote, but unlike in 2012, they walked away with 51 percent of the seats. The reason for the different outcome was that people are constantly in motion, moving from town to town and region to region, with new housing developments going up endlessly. Demographic preferences changed along the way too: While a suburban voter was more likely to be a Republican in 2012, by 2018 they were pulling the blue lever.

The districts methodically drawn after 2010 can no longer be counted on for precision. Yet the technology has improved exponentially since the last round, with significant strides made in mapping and voter data, and if Republicans are given another chance to redraw the lines, there’s no reason to believe they can’t at least recreate that 20-seat gap between what voters ask for and what they get.

Democrats may be on such a heightened sense of alert about all manner of Republican electoral perfidy that they may behave as if they are out of power.

In 2018, Democrats were able to gain huge numbers largely because of that demographic flip in the suburbs but also because Pennsylvania’s courts redrew the commonwealth’s unconstitutionally gerrymandered lines. That year, Democrats won 53.7 percent of the vote and controlled 54 percent of the seats in the House.

It’s not out of the question that Democrats could buck the midterm curse. Popular conception of the midterm drop-off is misunderstood. The president’s party doesn’t lose seats primarily because voters change their minds or disapprove of the president’s performance, or even because they’re unhappy with the economy. All of those elements are a factor, but the biggest variable in the equation is who shows up to the polls. And members of the party out of power are more driven to show up to the polls: They’re angry at having lost the previous cycle and have endured two years of frustration, so they turn out at slightly higher rates. The party in power tends to be more comfortable, so they’re less likely to bother to show up. All of that could change in 2022, though. Nobody knows whether the irregular voters inspired to go the polls by former President Donald Trump will show up for a generic Republican in a midterm, and 2018 suggests that they might not, especially if the economy is humming on the back of Biden’s stimulus and the reopening of the economy post-vaccination.

And Democrats may be on such a heightened sense of alert about all manner of Republican electoral perfidy — from the storming of the Capitol to Georgia’s voter suppression legislation and beyond — that they may behave as if they are out of power. That’s certainly what Democratic leaders hope.

With Republicans in need of just five more seats to flip the House, Democrats will need to either run up 2018 wave-like numbers or ban gerrymandering if they want to retain control. There’s no other option.