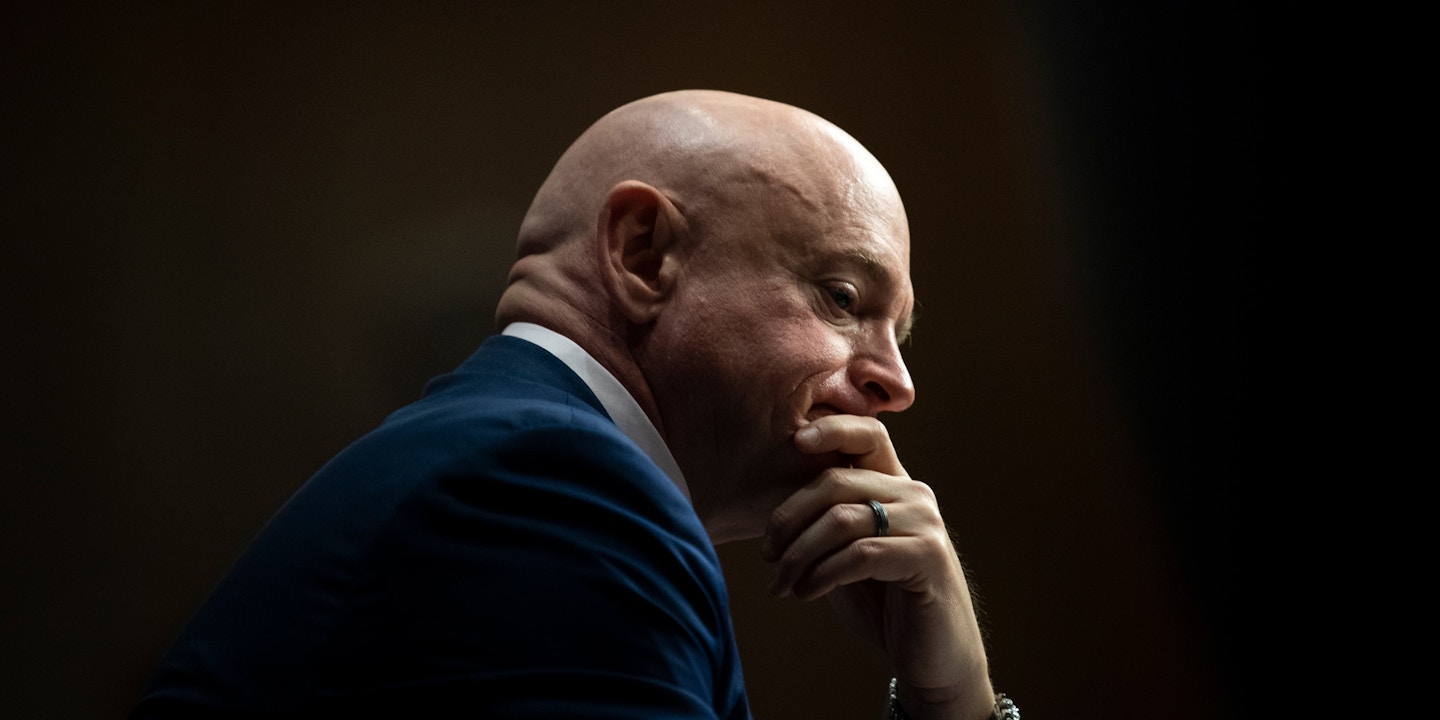 Sen. Mark Kelly has resisted co-sponsoring a major piece of labor law reform legislation known as the PRO Act, citing a policy of not endorsing measures that don’t also have Republican support, according to sources familiar with the reasoning provided to advocates of the bill.

Winning Kelly’s support for the legislation is crucial, as it is hoped that if he comes on board he could bring his Arizona colleague, Sen. Kyrsten Sinema, with him, leaving backers just three cosponsors short of the 50 that would bring the bill to the floor. Kelly has told advocates that he doesn’t want to be the only Arizona senator to cosponsor the bill, so backers of the bill are hoping to win the two in tandem.

The PRO Act, short for the Protecting the Right to Organize Act, has already passed the House of Representatives. The legislation would make it easier to form a union and win a contract, harder for companies to union-bust, and easier for the National Labor Relations Board to crack down on rule-breaking companies. It would also make more workers eligible to unionize, including independent contractors. It would arguably be the most transformative piece of legislation enacted since the 1970s.

Amazon’s ability to snuff out a union drive in Bessemer, Alabama, this week, replete with what the union has called out as unfair labor practices during the election, has highlighted the need for the PRO Act, as workers often face insurmountable obstacles under current labor law. Currently, even when workers do vote to unionize, companies are able to stall collective bargaining agreements, sometimes for years.

The act of co-sponsoring the legislation has taken on heightened importance in the wake of Senate Majority Leader Chuck Schumer’s pledge to bring the bill to a floor vote if it obtains at least 50 co-sponsors, as The Intercept previously reported. The bill has 45 co-sponsors, including 44 Democrats and independent Bernie Sanders of Vermont. The other holdouts include Sens. Joe Manchin of West Virginia, Mark Warner of Virginia, Angus King of Maine, and Sinema of Arizona.

Though five Republicans voted for it in the House, there is no credible scenario in which a Senate Republican endorses the PRO Act, meaning that Kelly’s rationale would doom it to failure. And a review of Kelly’s legislative history suggests that he is not generally uncomfortable sponsoring bills that don’t have Republican support, and that unions still have a path to winning his support.

A review of Kelly’s legislative history reveals that he has previously endorsed controversial legislation that has no Republican support.

Kelly is a co-sponsor of S.833, which empowers Medicare to negotiate drug prices, a bill hotly contested by Republicans and the drugmaker lobby. Another bill, S.440, the Continued Funding for Senior Services During COVID–19 Act, has no Republican support.

Neither, unsurprisingly, does the Background Check Expansion Act, which Kelly, a champion of gun safety reform, has co-sponsored.

Kelly has also endorsed the bill that Republicans consider to be the most partisan of any legislative effort currently underway: S.1, a democracy reform package known as the For the People Act.

“Senator Kelly is evaluating the legislation and speaking about it with stakeholders in Arizona as he focuses on building an economic recovery that benefits working Arizonans who have been hit hard by the pandemic,” said a Kelly spokesperson. “As always he puts a high value on bipartisanship and makes decisions based on what is best for Arizona.”

Kelly is up for reelection in 2022, Sinema in 2024. Arizona has some of the lowest union density in the country, at less than 6 percent. Virginia sits at 6 percent, while West Virginia has more than double that number, above 13 percent. In Maine, 13.5 percent of workers are represented by a union.

Supporters are hopeful that Maine’s independent King, who caucuses with Senate Democrats, will soon co-sponsor the legislation, according to multiple sources involved in the lobbying effort.

King’s staff, in conversations with members of the Maine AFL-CIO at the end of March, cited a massive volume of calls to his Senate office from workers around the state, according to people familiar with the conversation. That helped balance out extraordinary pressure from capital and employers working against the measure. “They said he had been ‘inundated’ with calls from both sides,” said one labor official, who asked to speak anonymously, citing the private nature of the conversations. King’s office declined to comment.

Many of those calls were organized by a coalition of unions and the Democratic Socialists of America. DSA has made passing the PRO Act among its highest priorities, as part of the broader coalition led by the International Union of Painters and Allied Trades and the Communications Workers of America. DSA has organized at least 500,000 calls into the offices of the five holdouts — now four — urging them to sponsor the bill.

“Our coalition has been able to mobilize working people because the PRO Act is such a wildly popular piece of legislation. That’s certainly true in Maine, but it’s also true in Virginia, West Virginia, and Arizona,” said Ryan Kekeris, communications director for the IUPAT and lead organizer on their campaign to pass the PRO Act. “We know that labor rights are civil rights, and we know that the PRO Act would be the biggest expansion of fundamental rights to working people in generations. Roughly 90 percent of all working people do not have the freedom to collectively bargain, and millions say they would join a union right now if given the opportunity. We intend to give them that opportunity. We commend Sen. King for listening to his constituents. We urge Sens. Warner, Manchin, Sinema, and Kelly to do the same.”

DSA has long had internal debates over how much effort to put into electoral or legislative efforts and how much energy to dedicate to outside pressure on the political system — either by organizing workers into unions, challenging corporate power or fossil fuel projects, or establishing mutual aid networks.

In this case, the Green New Deal committee and the Democratic Socialist Labor Commission both independently decided to make the PRO Act their top priority and joined forces in the effort. “This was the most unifying thing in DSA since Bernie,” said Thea Riofrancos, an assistant professor of political science at Providence College and a member of DSA’s Green New Deal campaign committee. A Green New Deal won’t be possible without a broader base of organized labor fighting for it, Riofrancos argued.

Sanders, whose 2016 presidential campaign revived DSA, has repeatedly amplified the coalition’s call for volunteers to sign up for phone shifts.

The only way we are going to rebuild the disappearing middle class in America – the only way – is to rebuild the trade union movement and give workers a seat at the negotiating table. We must organize to pass the PRO Act NOW. https://t.co/Lkb7rv5AQY

In Virginia, DSA is running a campaign called #WhyWontWarnerWednesday, hoping to push him to sign the legislation. In Arizona, DSA is coordinating on a statewide basis with organized labor. In West Virginia, the coalition has been organizing calls to Manchin’s office.

Passing the PRO Act with 50 votes will also require reforming the filibuster, which means that Manchin needs to be pressured both to sign the legislation and reform Senate procedure so that it can pass.

King, the sources said, plans to push for a change to how the legislation deals with joint employers, though what change in particular he’s advocating is unclear. Currently, the act would change labor law so that both companies with direct and indirect control over employees are considered employers.