About a month out from the 2020 presidential election, an app called RoboKiller published the first glimpse into how campaigns and advocacy groups were leveraging political texts and calls to shape the race. The app, designed to block automated calls and spam texts, found that after June 2020, robocalls declined, but political text messaging picked up. By the end of September, Republicans had sent 1.8 billion texts to voters, and Democrats had sent 902 million.

If you lived in a swing state, you were probably getting more than five or six texts per day from political volunteers — a level you’d never experienced in prior cycles.

The draw of text messaging as a political outreach tool is not hard to understand in an age when millions pay extra to skip TV ads and emails often go straight to the spam folder. Text message “open rates” tend to be much higher than those of email, making texting a more attractive way for campaigns to engage voters. And while businesses are required under federal law to get affirmative consent to contact individuals by text, so-called peer-to-peer messaging, or P2P, has long operated in a legal gray area. Because peer-to-peer messages are sent by individuals, though aided by applications, they have not qualified as the kind of automated mass text blasts that need opt-in consent.

But mobile carriers like T-Mobile and AT&T are unhappy with the number of spam text messages — including political ones — that their customers receive. In the next few months, they’re rolling out major changes affecting who can send texts and how many they can send. The changes — named “10DLC” for the 10-digit long codes that high-volume businesses and apps use to text local numbers — will require high-volume text purveyors to register with the Campaign Registry, a subsidiary of the Milan-based communications firm Kaleyra. Carriers will impose higher messaging fees on any businesses, campaigns, and other mass texting efforts that don’t file with the Registry, and in some cases block them from delivering messages altogether.

In recent weeks, a coalition of liberal and progressive advocacy groups have mounted a campaign to put the brakes on 10DLC, rejecting the characterization of their messages as spam and raising concerns that the blunt 10DLC rules will hamper one of their most effective organizing tools. The opaque registration and vetting process, the groups warn, could lead to discrimination against smaller organizations with less-established track records, as well as overwhelm them with new and higher fees. In early March, a coalition of prominent left-leaning groups — including the Working Families Party, MoveOn, the NAACP, People’s Action, the American Federation of Teachers, and Planned Parenthood — sent a letter to the White House and Congress urging intervention.

10DLC points to the extraordinary power tech companies have to regulate who can communicate with the public.

CTIA, the telecom trade association that represents AT&T and T-Mobile USA, argues that mobile carriers have an obligation to respond to user frustration with unwanted text messaging. But critics say 10DLC points to the extraordinary power tech companies have to regulate who can communicate with the public.

“10DLC isn’t legislation, instead you have for-profit companies [that] are now acting as a government,” said Debra Cleaver, founder of VoteAmerica, a nonpartisan voter advocacy group that sent peer-to-peer messaging to 30 million people last cycle. “I am skeptical of private organizations playing this regulatory role.”

Peer-to-peer texting swept the political world following the 2016 election, when the Bernie Sanders campaign leveraged a young left-leaning texting company called Hustle. Hustle, which worked with roughly 100 campaigns and facilitated 5.5 million texts in 2016, had 1,300 Democratic campaign clients by 2018, sending more than 200 million texts. A number of competitor firms have launched in the years since, including GetThru, RumbleUp, and Opn Sesame. Peer-to-peer texting suddenly allowed campaigns to reach voters, especially in rural areas, who were less likely to have smartphones.

“There’s no question that texting is the breakout tech of 2018,” one Republican digital strategist told the New York Times that summer.

Earlier that year, a coalition of peer-to-peer texting advocates moved to enshrine their exception to the opt-in requirement, petitioning the Federal Communications Commission to clarify that their texting methods were exempt from the Telephone Consumer Protection Act, the federal law governing telemarketers. In June 2020, the FCC issued a declaratory ruling affirming P2P was indeed distinct from autodialing, a win for campaigns and advocacy groups. Yet despite the FCC’s ruling, under 10DLC, all registered campaigns will be required to get opt-in consent, a major shift from the status quo.

Though liberal groups have expressed fears that the new 10DLC policies could target and silence them, conservatives have long argued that they have more to worry about when it comes to Big Tech discrimination. Over last year’s July 4 weekend, anti-spam monitors blocked a text blast administered by the Trump campaign, and it took five days for Trump officials to resolve the problem. Verizon, T-Mobile, and AT&T denied any partisan intent, but Republican operatives were left rattled by the experience. 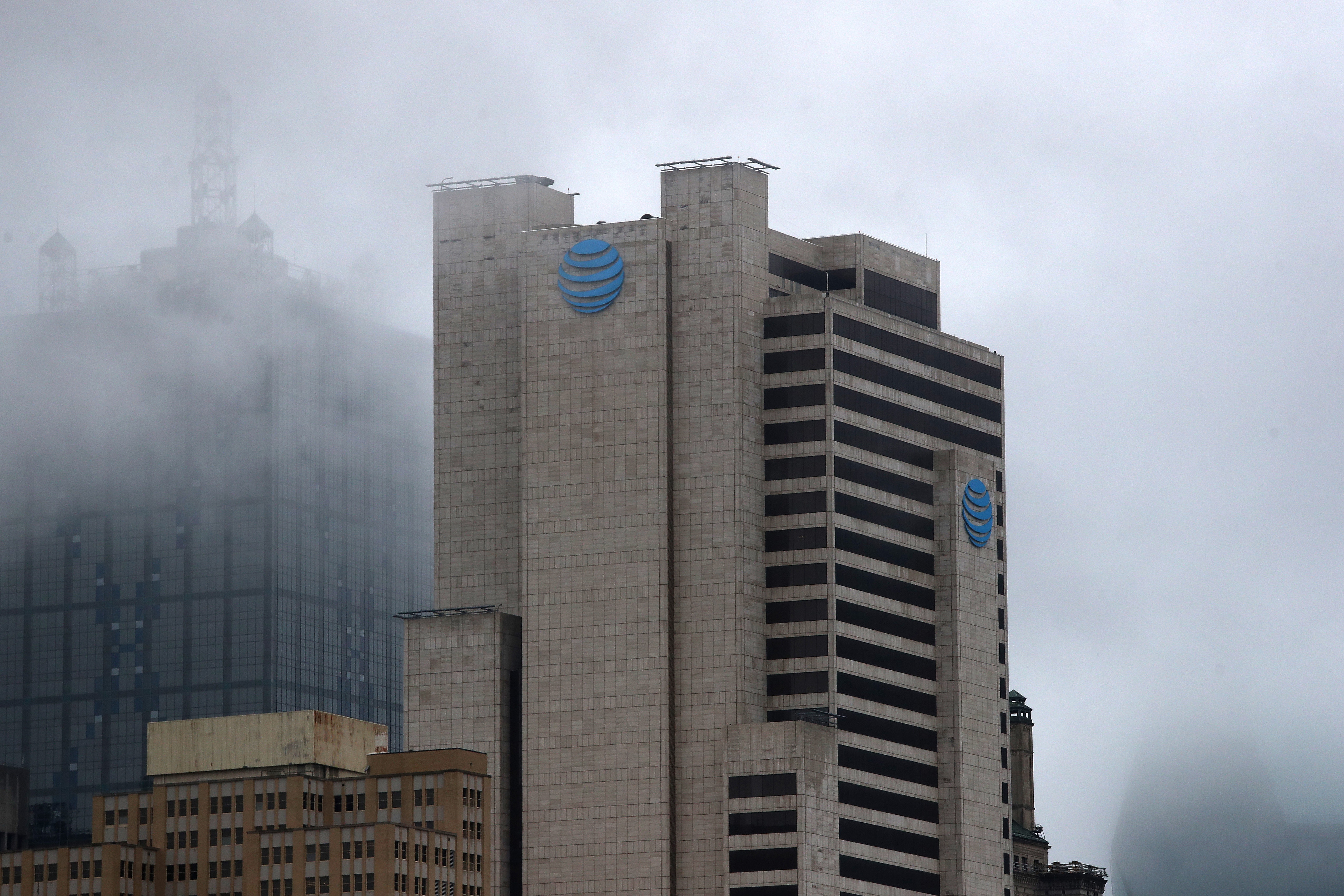 An exterior view of AT&T corporate headquarters in Dallas on March 13, 2020.

For progressives, one of the most concerning aspects of 10DLC is the issuance of so-called trust scores. Trust scores are algorithmic ratings that the Campaign Registry, a self-described  “reputation authority,” will assign to registered groups. The scores, based on a scale of 1 to 100, will impact how many texts a company or given campaign can send daily. Businesses and groups will also be able to pay for additional vetting from one of three third-party partners — Aegis Mobile, Campaign Verify, and WMC Global — to potentially boost their scores.

While the details of the trust scoring system are not well understood, it’s been likened to running a credit score on each group. “They could be looking at things like a group’s personal tax history, members’ criminal histories, they could also be googling to find groups associated with people they deem unsavory,” said Don Calloway, founder of the National Voter Protection Action Fund, which uses peer-to-peer messaging to combat voter suppression. “Grassroots orgs have members who get arrested all the time in peaceful protests.”

Newer groups and groups with less of a national profile fear they’ll be penalized by the algorithms used to calculate trust scores. “My concern is that legacy organizations like NAACP and the National Urban League are going to receive higher ratings simply because of the space that they occupy in the world with no regard for the work that they’re doing,” said Fran Hutchins, the executive director of Equality Federation, a group that helps state-based LGBTQ organizations build capacity.

Calloway said there’s just no scenario in which they could get affirmative texting consent from everyone they currently reach, or even everyone on their email lists, so making it clear how one can opt out is a better option. “You will lose people you’re currently engaging, they simply won’t all be able to opt in,” he said.

Aaron Alter, the director of telecommunications at SignalWire, a nonpartisan communications firm that supports P2P, said their 120 clients who have been vetted already had “not seen any political bias.” Alter, who has spent the past two years working closely with carriers, also predicts that mobile carriers might eventually create a carveout to exempt political groups from the opt-in requirement.

Campaign Verify, which is set to assess political campaigns and committees at the federal, state, and local levels, has an even partisan split by design. But progressives have raised particular concern about the involvement of Aegis Mobile, whose former executive chair, Jeff Goettman, has donated to Donald Trump and Republican Party fundraising platform WinRed. Goettman’s LinkedIn indicates he left the company in 2017 and is currently working on a Republican gubernatorial campaign in Virginia, but critics like Calloway say his history still raises red flags. (Lobbyists for Verizon, AT&T, and T-Mobile also had close ties with the Trump administration.) Aegis Mobile and Goettman did not return The Intercept’s requests for comment.

While it’s possible that progressives’ worst fears won’t come to pass, confusion abounds. Mobile carriers and some of their vetting partners have rolled out information with shifting deadlines, incomplete information, and mixed messages about how 10DLC might affect different groups. And all the new fees coming down the pipe are certain to cause new financial strain for organizations with fewer resources.

“I don’t think [carriers are] trying to take advantage but everything at the end of the day is a business,” said Alter. “And from a business perspective they are looking to see if they can capitalize.”

Over the last several years, mobile carriers have watched lawsuits crop up against unwanted political texts. Last summer, two Minnesota residents brought a class-action lawsuit against Bernie Sanders’s presidential campaign, alleging receipt of spam texts they had not consented to. The Trump campaign also faced legal challenges for unsolicited messages. CTIA commissioned polling from Morning Consult that showed a majority of Americans considered political texts a nuisance or spam, writing, “This is one area of actual bipartisanship — 74% of Republicans and 67% of Democrats.”

Margaret Boles, a spokesperson for AT&T, told The Intercept that “protecting our customers from unwanted text messages is a top priority for us.” She added that they’re currently in the process of collecting feedback from industry partners to “improve our internal processes, help to identify problem areas and ensure the integrity of our 10DLC platform to the benefit of message senders and receivers.”

A representative from T-Mobile did not return requests for comment.

For now, there are no plans for federal legislation to stop 10DLC, but progressive activists hope that individual members of Congress will contact mobile carriers and request that they partner with concerned groups before rolling out final changes.

“We’re asking members to use their influence,” said Calloway. His coalition has already had a meeting with Sen. Ben Ray Luján, D-N.M., who chairs the Commerce Subcommittee on Communications, Media, and Broadband. Calloway added that he has spoken personally with about 30 members’ offices but stressed that his organizing work represents only a fraction of the total.

Luján’s office did not respond to The Intercept’s request for comment.

“We encourage wireless carriers, aggregators, and others in the wireless ecosystem to adopt a more collaborative approach to text messaging regulations and actually engage with the communities impacted by these changes,” said LaToia Jones, a senior vice president at Hustle, “instead of unilaterally dictating opaque rules that disenfranchise voters and chill civic engagement without any external input or oversight.”