Israel’s defenders tried to contain the damage from video of religious Zionists celebrating the conquest of Jerusalem as flames leapt above the Aqsa mosque compound. 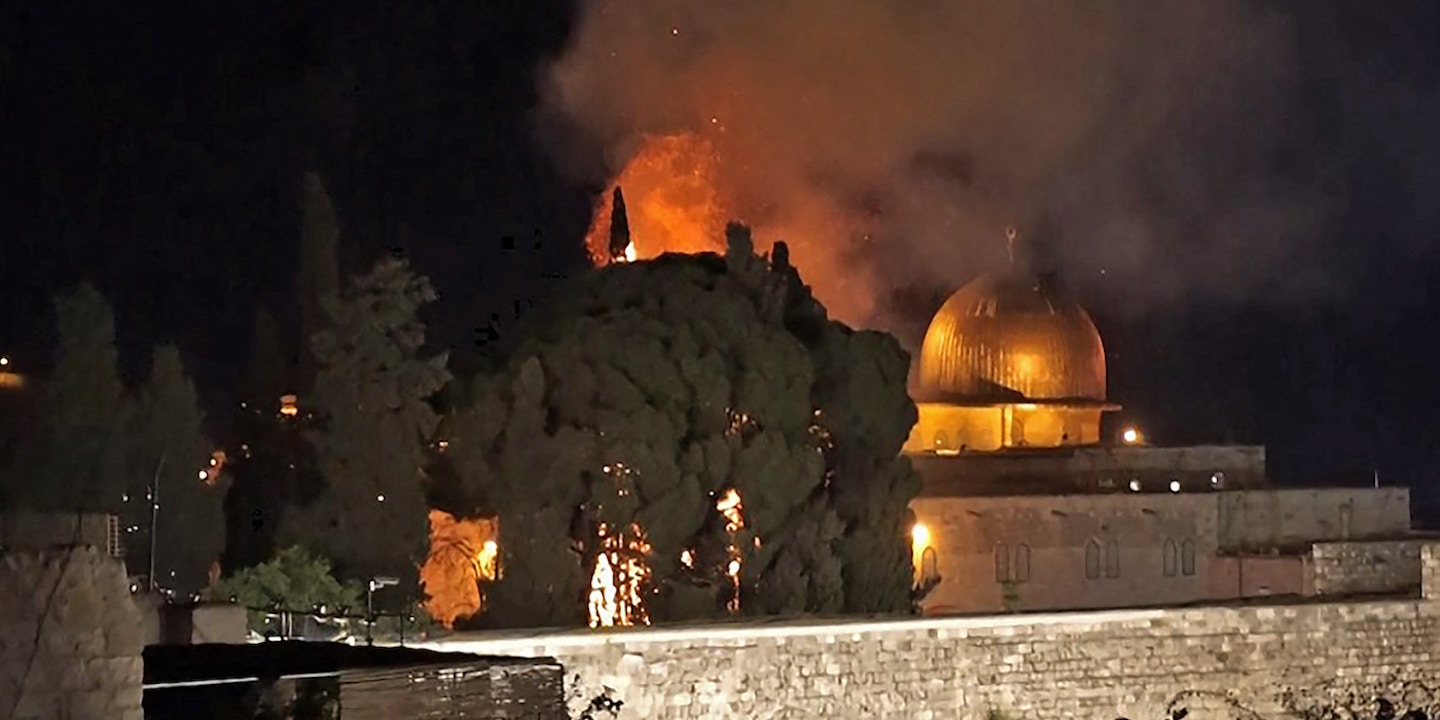 Weeks of protests in Jerusalem, where Palestinians are resisting an effort by Israeli settlers to force them from their homes and challenging Israeli police restrictions on their freedom to worship at Al Aqsa Mosque, spiraled into armed conflict on Monday, as Israeli airstrikes on Gaza killed 24 Palestinians, nine of them children, health officials said, after Hamas militants fired a barrage of rockets into Israel.

The rockets fired from Gaza, seven of which reportedly reached the outskirts of Jerusalem but caused no serious casualties, came hours after Israeli police had entered the Aqsa mosque compound on Monday morning, firing stun grenades and rubber bullets at Palestinian protesters defending the site with rocks and fireworks.

At one point during the daylong battle inside the compound, a large tree caught fire near the mosque, with conflicting reports as to which side was to blame.

One of the beautiful cypress trees outside al-Aqsa mosque caught fire. Police say it's from from fireworks https://t.co/VzWHmkIc5w

Trees in the Aqsa compound on fire, probably from tear gas canisters. https://t.co/RDDxWY9nIJ

No damage was caused to the mosque, but before the fire was extinguished, Israeli television broadcast what Daniel Seidemann, the director of Terrestrial Jerusalem, called the “apocalyptic” image of “flames rising high above” the compound known as Haram al-Sharif, or the Noble Sanctuary, to Muslims and the Temple Mount to Jews.

One reporter from KAN says the fire is from a tree hit by a stun grenade, but that it’s not confirmed. Another reporter pointed out that Palestinians have been throwing explosives, firecrackers. Either way the fire is already out.

Akiva Weisz, a reporter for Israel’s public broadcaster, Kan, posted video on Twitter of the flames burning near the mosque as a group of Israeli flag-waving, far-right religious extremists celebrated Jerusalem Day, an annual commemoration of Israel seizing full control of the city in 1967.

Palestinian Italian journalist Rula Jebreal shared another, closer angle on the scene from Israeli TV, which showed some of the religious Zionists on the plaza recording the fire on their phones.

Another video clip of ultranationalist Israelis in ecstatic celebration in front of the Western Wall, as flames near the Aqsa mosque leapt into the night sky above, unsettled and appalled many Palestinian and Jewish critics of the 54-year-old Israeli occupation of the city.

Ayman Odeh, the leader of the Joint List of predominantly Arab parties in Israel’s parliament, called the images he posted on Twitter, of the party atmosphere on the plaza below the fire, shocking.

Odeh, a Palestinian citizen of Israel and an uncompromising critic of Israel’s attempt to make its occupation of East Jerusalem permanent, tweeted his one-word comment in Hebrew, but the frightening image of the region teetering on the edge of the abyss seemed to need no translation, as religious extremists — many of whom would like nothing better than to see the mosque destroyed — continued their celebration, at least untroubled by the flames.

Nathan Thrall, a Jerusalem-based expert on the conflict and the author of “The Only Language They Understand,” noted that the celebration of conquest was also taking place on a plaza that was constructed by demolishing a Palestinian neighborhood.

Days after conquering the Old City of Jerusalem in 1967, Israel razed one of its Palestinian neighborhoods and transformed it into the Western Wall plaza. On Jerusalem Day in 2021, Israelis celebrated in that occupied plaza as a fire blazed in the al-Aqsa mosque compound above. https://t.co/DXKgyKaHcc

The video shared by the Palestinian legislator reached millions of viewers on Twitter, in part because of a claim he did not make, that it showed the Israeli extremists celebrating what Turkey’s state-owned channel TRT World called “a blaze at Al Aqsa Mosque.”

The viral spread of the video, and false rumors that the mosque was on fire, prompted journalists to clarify that the fire had not spread from the tree, while defenders of Israel tried to contain the damage to the country’s image by insisting that Palestinians were to blame for starting it and noting, correctly, that the nationalistic celebrations on the plaza below were already well underway before it began.

Jewish celebrating Jerusalem day by western wall, while you can see Palestinians and Arabs shooting fireworks on the Temple Mount causing a fire near El Aqsa. After this people now saying Israelis are celebrating burning the of al aqsa. Pure blood label.pic.twitter.com/fPEYV9A447

Israeli nationalists and reporters shared a distant video clip of the confusing battle between the protesters and the police around the mosque, which they presented as proof that the fire had been started by Palestinians. Judah Ari Gross, a military correspondent for the Times of Israel, suggested on Twitter that fireworks that started the blaze were fired toward the plaza “where thousands of Jews were gathered for Jerusalem Day celebrations.”

Correction: Additional footage of the incident appears to show that the fireworks were fired from the Temple Mount toward the Western Wall below (where thousands of Jews were gathered for Jerusalem Day celebrations).

The trees were just in the way. pic.twitter.com/NOw9Y1sdda

While the video evidence is far from clear, it seems possible that Palestinian protesters did accidentally start the fire. But this focus on who started the fire, and whether the Israeli extremists were celebrating the blaze, is a distraction from what is most disturbing about the video shared by Odeh.

That’s because, as several Israeli journalists, as well as activists and scholars who speak Hebrew, pointed out, what was most horrifying about the scene was the song the ultranationalists were singing along to as a fire raged in front of them near Islam’s third holiest site.

It was, as Yair Wallach, a senior lecturer in Israeli Studies at SOAS University of London, explained, a 1990s Hassidic rock tune associated with the far-right Jewish supremacist movement of Rabbi Meir Kahane.

I am sharing this, reluctantly, to point to the song they're singing. It's a Kahanist revenge song, words from the biblical story of Samson:
"O God, that I may be at once avenged of the Philistines for my two eyes"
(Yimach Shemam, may their name be effaced, the youths chant) https://t.co/OZCYNpdjUF

Kahane was the virulently anti-Arab founder of the Jewish Defense League, whose extremist Kach party was designated a terrorist organization and banned in 1994 after one of its members, Baruch Goldstein, killed 29 Muslims praying at the Tomb of the Patriarchs shrine in the West Bank city of Hebron.

Before he was assassinated in 1990, Kahane served in the Israeli parliament, the Knesset, where he introduced legislation to strip non-Jews of citizenship and called for the ethnic cleansing of Palestinians from the occupied territories.

In March, Itamar Ben-Gvir, the former head of Kahane’s youth movement and the current head of the far-right Jewish Power party, was elected to the Knesset. Ben-Gvir, who has called for the destruction of Al Aqsa Mosque, made a provocative visit on Monday to the East Jerusalem neighborhood of Sheikh Jarrah, to advocate for the expulsion of Palestinians from their homes, and then went to the Temple Mount, Haaretz reported.

Activists from the Kahanist youth organization Lehava, which is dedicated to preventing romantic relationships between Jews and Arabs, were in the city to take part in the annual Jerusalem Day flag march, in which religious Zionists usually parade through Palestinian neighborhoods in the Old City.

Video from a friend on the ground in the Jerusalem: right-wing Israeli settlers flying the Kahanist Lehava flag at the "March of Flags" pic.twitter.com/RR8BHi14Xk

That parade was halted on Monday, but the activists were at the heart of the musical celebration on the plaza as the fire burned above them.

“Hard to capture how deeply horrifying this video is,” Simone Zimmerman, the U.S. director of the Israeli human rights organization B’Tselem, wrote on Twitter of the clip Odeh shared. “Thousands of Israeli Jews singing about revenge, chanting ‘Yimach shemam (may their names be erased),’ dancing as a fire burns on the Temple Mount. This is genocidal animus towards Palestinians — emboldened and unfiltered.”

“The song is not only genocidal, it’s also suicidal — from the story of Samson, who kills himself while getting revenge on the Philistines,” she added.

“These teens are student of pre-military yeshivas (the flag being waved is for the Tzvia Yeshiva in Dimona),” Elizabeth Tsurkov, a research fellow at the Forum for Regional Thinking, pointing out some of the young Israelis gleefully singing about taking revenge on the biblical enemies of the Jews. “Imagine what these boys will do once they are given guns and authority over millions of Palestinians, while they enjoy near-total impunity.”

“As a Jew, it hurts me to see this disgusting show of hatred at the holiest site for the Jews, the Western Wall,” she continued. “Young boys celebrating as east Jerusalem burns. Zionism is infecting Jewish identity in Israel with ethno-nationalism, militarism and glorification of violence.”

While several Jewish observers who understand the meaning of the song the young extremists were singing echoed Tsurkov’s comments, Yair Wallach pointed out earlier in the day that the Palestinian struggle to keep Israel from asserting control over their access to the Aqsa mosque compound is not entirely, or exclusively, about religion.

“Palestinian effective sovereignty in al-Aqsa is not due to diplomatic negotiations, or international law, or armed struggle (although all these played a role in defending it). It’s about moral authority. Israeli policies in the last decade threaten the status quo by effectively allowing ritual Jewish visits to the site (although nominally banned). But Israel has not dared to take over the site, and it remains in Palestinian hands, at least for now,” he continued.

“So lots of people will emphasise the religious dimension, which is clearly there and is important, but it’s not just about that. It’s also about basic freedom,” Wallach observed. “And this effective and symbolic sovereignty, despite its clear limitations, is deeper than the limited self-rule of Ramallah or Gaza and ultimately provides a far greater challenge to Israel.”