The door is open for drone sales to authoritarian countries like the United Arab Emirates. 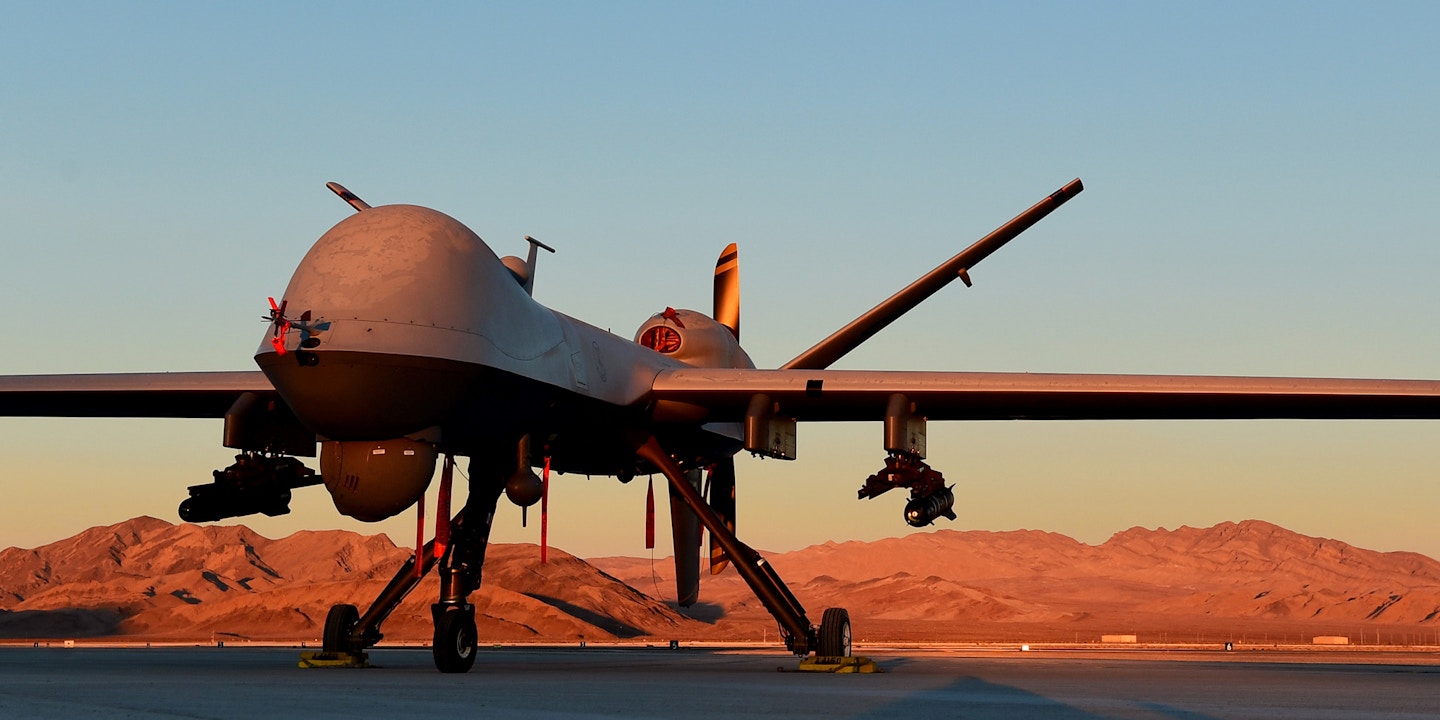 When the Trump administration announced last July it was loosening decades-old restrictions on military drone exports, the top Democrat on the Senate Foreign Relations Committee came out swinging. Progressive Democrats pounced and introduced legislation to reverse the decision.

The new policy, they correctly warned, opened the door for sales to authoritarian countries like the United Arab Emirates that Democratic and Republican administrations alike had denied since the Reagan era.

“As we explore the repercussions of today’s announcement on our broader foreign policy goals and our national security interests,” Sen. Robert Menendez, D-N.J., said of the Trump administration’s July 24 announcement, “this reckless decision once again makes it more likely that we will export some of our most deadly weaponry to human rights abusers across the world. This is yet another reckless move by an Administration fixated with eliminating the international cooperation that has made the United States and other countries safer for decades.”

Menendez was the ranking member of the Senate Foreign Relations Committee at the time and had to defer the panel’s agenda to Chair Jim Risch, a Republican from Idaho, who applauded the White House’s decision. From Risch’s view, increased sales under the policy change would hamper the growing prowess of China, whose courtship of traditional U.S. military customers cheated American manufacturers out of lucrative business deals.

Now in a real position to influence policy as chair of the committee, thanks to two runoff elections in Georgia that few analysts expected would both result in Democratic victories, Menendez has been silent on the issue — even after news emerged in March that President Joe Biden wants to preserve his predecessor’s radical policy change.

Reuters reported on March 25 that the Biden-led National Security Council is looking to keep the shift in place and eventually form a new international agreement to guide drone exports — enabling deals selling General Atomics’ MQ-9B drones to Taiwan and the UAE, which the State Department authorized in the twilight of Trump’s presidency, to proceed.

It would be an extension of the decision made by the Trump State Department to no longer observe the international Missile Technology Control Regime’s “strong presumption of denial” standard for exports of the most sophisticated drones on the market and instead invoke its “national discretion.” Reports such as Reuters’s often emerge as a trial balloon, testing whether a new policy will engender public pushback; this one didn’t.

The chair of the Senate Foreign Relations Committee, an outspoken hawk, made no public statements in the wake of this news: no press releases, no rebukes on social media. That’s despite the UAE’s airstrikes against civilians in Yemen and Menendez’s numerous criticisms of arms sales to the Emirates, as well as his notable effort in 2019 to block the Trump administration’s attempt to greenlight billions of dollars in exports without congressional approval by declaring a national emergency.

Concerns about the former president’s drive to sell MQ-9s to the UAE also motivated a bipartisan group of senators to support a new bill in the weeks after the State Department announced the MTCR policy change that would counteract its aims. The bill, introduced by Sen. Chris Murphy, D-Conn., a member of the Senate Foreign Relations Committee, and co-sponsored by Sens. Chris Coons, D-Del.; Mike Lee, R-Utah; Rand Paul, R-Ky.; and Bernie Sanders, I-Vt., would prevent exports of sophisticated military drones, with an exception made for NATO members and other close allies.

The sale to Taiwan also marks a significant departure from long-standing dealings with its government, as past U.S. administrations have declined to share with it the most sophisticated American weaponry in order to avoid antagonizing China, which claims sovereignty over the island.

According to Juan Pachón, a spokesperson for Menendez and the Senate Foreign Relations Committee’s Democratic majority, the panel’s team has instead worked behind the scenes on the issue, telling The Intercept in an email Tuesday: “The Senate Foreign Relations staff has in fact continued making several inquiries into the State Department regarding the MTCR policy change as it continues to be of great concern to Chairman Menendez.”

Pachón said the inquiries were sent in the past few months but declined to share copies.

The Democrats’ dominant voice on foreign policy matters in the Senate didn’t stick his neck out when his party’s leader, finally in a position to reverse a “reckless” policy change, declined to do so — and neither did the rank and file.

Indeed, no lawmaker who opposed the Trump administration’s decision or called attention to the former president’s extreme approach to arms sales has publicly derided the Biden-led White House’s reported plan to continue authorizing exports of advanced military drones using its own discretion rather than a “strong presumption of denial” per MTCR guidelines. Murphy, Coons, and even Sanders, perhaps the Senate’s most vocal critic of U.S. support for the war in Yemen, have stayed quiet. 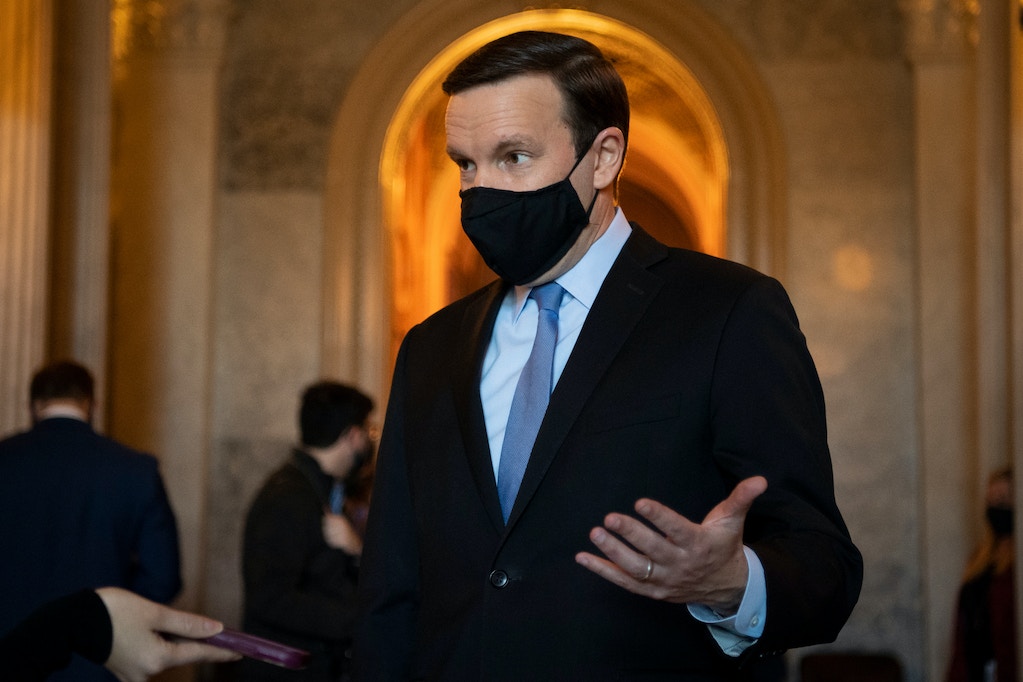 A congressional staffer told The Intercept in an email Wednesday that Murphy does continue to have concerns about loosening restrictions on drone exports and has raised these concerns directly with the White House. The staffer did not immediately reply to a request for more detail about specific actions Murphy has taken, though.

The stakes couldn’t be higher. Not only did this policy change open the door to proliferation of some of the U.S.’s most lethal spying capabilities, it undermined an important international framework for curbing the global spread of deadly cruise missiles.

The MTCR was originally created in 1987 as a nonbinding agreement to curtail transfers of missiles carrying nuclear weapons and expanded six years later to include missiles capable of delivering all types of weapons of mass destruction. Restrictions also applied to key component technology, including unmanned aerial vehicles, or UAVs, with certain range and payload capacity.

Although the policy change subverted a multilateral agreement that’s been key to controlling the proliferation of WMD, a January notice by the Commerce Department posted to the Federal Register that detailed modifications to U.S. licensing procedure did pledge to maintain restraints on exports of cruise missiles and hypersonic weapons, into which the Pentagon is now investing hundreds of millions of dollars.

The focus on economic competition rather than human rights or security may open the door to eventual leniencies on exports of increasingly destructive military capabilities.

However, the Trump administration justified its MTCR policy change and activist arms sale policy more broadly, which oversaw more lucrative deals than previous presidencies, as a means of defending American companies’ global market share rather than strategic goals. Especially given the Biden administration’s intention to keep his predecessor’s plan, the focus on economic competition rather than human rights or security may open the door to eventual leniencies on exports of increasingly destructive military capabilities like cruise missiles.

Further, the State Department has not yet revealed whether the policy change allows cooperative development and production opportunities with customers’ native manufacturers, which some trade advocates have pushed for. The MTCR prohibits the transfer of key materiel that could be used to build cruise missiles, and if the U.S. government permits drone co-development and co-production, that could pose another risk to dangerous proliferation.

Meanwhile, American companies and trade groups have kept up their lobbying campaigns to influence policy.

The U.S. Chamber of Commerce, for example, lists unmanned aerial systems and the U.S. Conventional Arms Transfer Policy, or CATP, under which the Trump administration originally announced its intention to expand U.S. drone exports in 2018, as among its top lobbying issues in a filing with the House of Representatives for the first quarter of 2021. The Aerospace Industries Association also lists CATP as one of its core issues during the same time frame, per a lobbying disclosure.

During the first quarter, General Atomics had contracts worth tens of thousands of dollars with lobbying firm American Defense International, which would secure meetings on UAVs and foreign weapon sales, and Atlantic Strategies Group, which would “gain support for [foreign military sale] funding” for drones, according to public records. A political action committee for the company has also donated thousands of dollars to Menendez.