Brazil’s Supreme Court granted search warrants for the homes and financial records of Ricardo Salles, who accelerated deforestation during the Covid-19 pandemic. 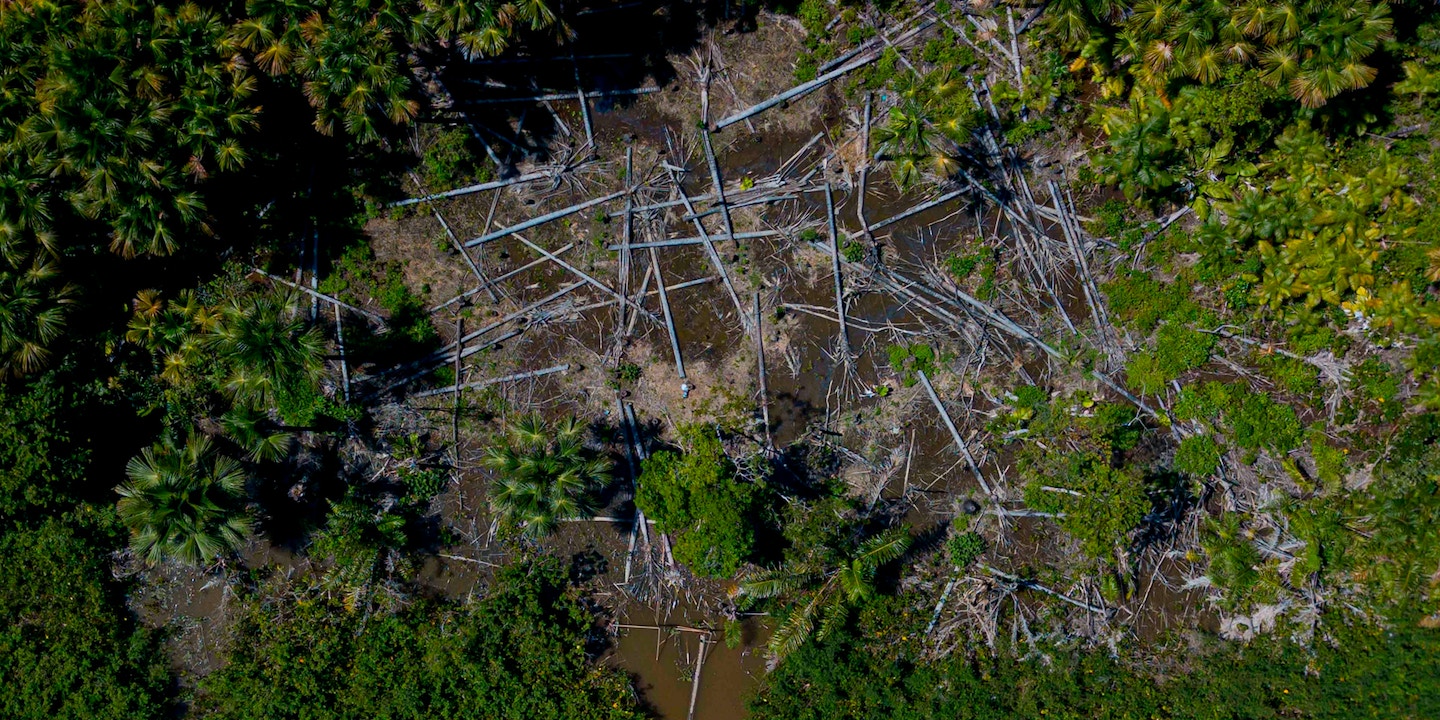 Ricardo Salles, Brazil’s environment minister, was frustrated. Not because of record fires and deforestation in the Amazon, but because many of his attempts at deregulation had been thwarted. “Everything we do is shot down by the judiciary the next day,” Salles complained in a video recording of a Cabinet meeting in 2020 that was later made public by the Supreme Court.

However, he also saw a fantastic opportunity in the pandemic that was just taking hold in Brazil. “We have the possibility at this moment that the press attention is exclusively focused almost exclusively on Covid,” he told his colleagues and far-right President Jair Bolsonaro. It was time, he said, to “let the cattle loose and change all the rules and simplify the regulations.”

Over the last year, that is exactly what the Bolsonaro administration has done: kneecapped regulatory bodies, signed wide-ranging executive decrees, drafted new laws, and encouraged illegal miners, ranchers, and loggers to be even bolder in their race to strip the Amazon of its resources. These policies have been catastrophic for the hundreds of thousands of Indigenous Brazilians who live on federally protected lands that are increasingly under attack by bands of heavily armed criminals with ties to powerful elites. Many scientists believe that the Amazon is dangerously close to reaching a level of deforestation that would provoke a rapid and irreversible collapse of the region’s complex ecosystem, with wide-ranging implications for the continent and the globe.

But the effort to push back against Bolsonaro’s environmental policies has just gotten an unexpected boost from Brazil’s Supreme Court. Last week, the Supreme Court granted search warrants for Salles’ homes and financial records and ordered that the country’s top environmental regulator, Eduardo Bim, be temporarily removed from his position while the investigation is underway. Salles reportedly did not turn over his cellphone to the police and began using a new phone and number the day the investigation was announced, which could be considered obstruction of justice. Bim has temporarily stepped down.

The Supreme Court decision highlighted $2.6 million in suspicious transactions by a law firm co-owned by Salles and his mother. The Federal Police are investigating Salles and 10 officials under his command for alleged participation in a criminal logging syndicate, corruption, money laundering, and interfering in a police operation that resulted in the largest seizure of illegal timber in Brazilian history, among other crimes. The timber, enough to fill 6,243 trucks, was destined for the U.S. and Europe.

The investigation began after the U.S. Embassy informed the Brazilian government of a seizure of three containers of timber in Savannah, Georgia, believed to be of illicit origin due to lack of proper documentation. Bim tried and failed to convince the U.S. authorities to clear the containers, then changed the regulations to no longer require the missing documents. According to Brazilian news reports, the U.S. notified the Federal Police of concerns about “possible inappropriate actions or corrupt behavior” by representatives of the importing company “and/or public officials” responsible for overseeing the extraction and export of wood products from the Amazon region.

The director-general of the Federal Police and the public prosecutor, both staunch Bolsonaro allies, were reportedly not informed of the operation against Salles, which was approved by a sole Supreme Court minister. Bolsonaro has controversially replaced career bureaucrats with ardent loyalists, including much of the Federal Police leadership and the leader of the Brazilian Intelligence Agency. However, public servants are difficult to fire, and independent voices still remain within the ranks, like those responsible for the Salles investigation.

With Brazil’s Congress and most enforcement agencies under Bolsonaro’s thumb, the Supreme Court has been forced to fill in the gap and become the main check against the president’s power and a primary target of his anger. Brazilian President Jair Bolsonaro, second from the left, and Ricardo Salles, minister of the environment, third from the left, participate in the ceremony at Brasília Air Base on Oct. 23, 2020.

Bolsonaro’s mission to bulldoze environmental protections continues to advance on multiple fronts, despite the investigation into Salles and his associates.

Earlier this month, the lower house of Congress, the majority of which is allied with Bolsonaro, passed the most ambitious and potentially calamitous legislation yet for the Amazon. The bill would do away with environmental licensing for many of the most harmful economic activities and remove the responsibility of banks and lenders that finance these activities.

Put forward by the powerful agribusiness caucus, the bill, which still needs to pass the Senate, would end the need for environmental licensing or allow “self-licensing” for many types of farming and infrastructure projects, as well as improvements to existing installations. It would also make it easier to greenlight projects on the 41 percent of Indigenous lands that are not yet fully recognized by the government and removes the right of Indigenous communities to veto proposed projects on their own land.

“The environmental license is the main tool that exists in the country for preventing pollution and degradation,” according to Suely Araújo, a senior specialist at the Climate Observatory, a nongovernmental organization, and former president of the Brazilian Institute of Environment and Renewable Natural Resources, in an interview with The Intercept. Araújo says the bill is unconstitutional and would create “chaos” and “unprecedented legal uncertainty.” She is also concerned about other proposed legislation that is designed to loosen restrictions on pesticides, legalize mining on Indigenous reserves, and facilitate large-scale land grabbing.

Under Salles, the Brazilian government made over 1,000 regulatory changes since 2019 related to the environment without having to go through Congress, according to Política por Inteiro, a watchdog project. These changes included gutting regulatory budgets, reducing the voice of civil society on oversight boards, increasing tolerance for pollution and toxic waste, creating a larger role for the military, waiving unpaid fines, facilitating land grabbing and commodity exports, and blocking new regulations recommended by experts, according to a report by Climate Observatory.

Last December, Brazil did not increase its climate crisis goals under the United Nations Paris Agreement, as many other countries did, and actually removed a previous pledge to reduce deforestation, as well as any use of the word. Salles, a climate crisis denier, repeated a demand from the previous year that Brazil must receive $10 billion in foreign aid per year if it is to be expected to meet its goals. The position, coming from a government that has shown no interest in protecting the environment, was derided by 56 climate organizations as attempted “blackmail,” labeling the proposal “insufficient and immoral.” 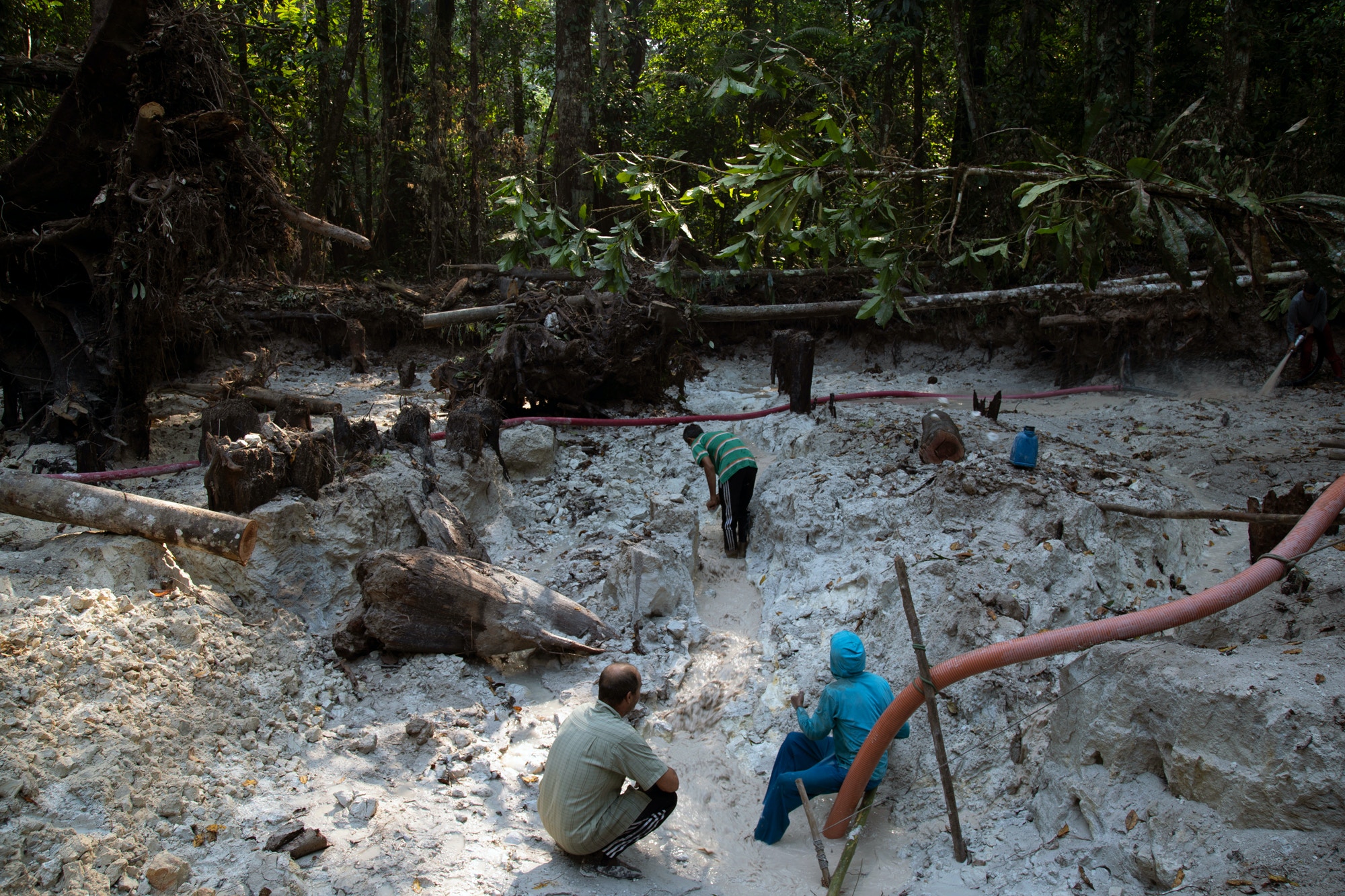 Gold miners work on an illegal operation in the Amazon jungle, in the Itaituba area in the state of Pará, Brazil, on Aug. 21, 2020.

The on-the-ground results of Salles’ policies have been predictable: Deforestation has risen year over year, and organized crime is emboldened. Last year, an area the size of Jamaica was deforested, the worst tally since 2008. Worse yet, much of the deforestation is occurring in new, more remote areas where land grabbers previously did not operate, including in constitutionally protected Indigenous reserves.

In recent weeks, wildcat miners opened fire three times on a village in the Yanomami Indigenous reserve, which borders Venezuela and sits on a massive gold deposit, in the Amazonian state of Roraima. On the third occasion, on May 11, around 20 miners were repelled without gunfire by six Federal Police officers in the village but returned an hour later to attack again, this time using heavy weaponry, said Dario Kopenawa Yanomami, vice president of the Hutukara Yanomami Association, in an interview with The Intercept. “Organized crime gangs are operating inside the Yanomami territory,” he said.

It is estimated that around 20,000 wildcat miners are operating illegally within the Yanomami territory, which is larger than Indiana and home to around 27,000 people. Miners are now operating less than 10 miles away from uncontacted tribes on the territory. “The Brazilian government is trying to kill our isolated Indians through invasion,” Kopenawa said. A Supreme Court minister ordered the Bolsonaro administration, this week, to take immediate measures to protect indigenous communities.

Bolsonaro is also under enormous international pressure to stop destroying the Amazon. A $19 trillion trade deal between the European Union and the Mercosur bloc — comprised of Brazil, Argentina, Paraguay, and Uruguay — is being held up over environmental concerns, mostly regarding Brazil. Dozens of international corporations have boycotted or threatened to boycott Brazilian goods over environmental policies since the massive forest fires of 2019. Last year, Brazil sold more than $100 billion in agricultural goods and livestock abroad, representing nearly half of all exports. Mining exports totaled $37 billion.

Climate has now become a key issue in bilateral relations with the U.S. under the Biden administration. During a presidential debate last September, then-presidential candidate Joe Biden angered Bolsonaro when he warned, “Stop tearing down the forest, and if you don’t, you are going to have significant economic consequences.” Brazilian business leaders, worried about sanctions and boycotts, have previously urged Bolsonaro to fire Salles and moderate his rhetoric, but the president resisted. That was before the investigation was announced. While the investigation will increase the pressure on Bolsonaro, so far he has reaffirmed his support for Salles, publicly calling him “an excellent minister.”

Marina Silva, a former environment minister who successfully reduced deforestation and is now a leading environmentalist, told The Intercept that “this is a highly embarrassing, terrible situation” and that regardless of the results of the investigation, Salles has been criminally negligent throughout his tenure and must be removed.

Indigenous leaders and environmentalists told The Intercept that the best weapon left to defend the Amazon is international action in the form of sanctions, boycotts, and political pressure. Silva, the former minister, said companies that boycott dirty Brazilian goods “are correct. You have to close the door on these products in your countries.”

Boycotts of industries that destroy the Amazon while creating huge profits for owners, who often rely on slave labor and criminality, would have serious short-term negative impacts on the Brazilian economy, which is reliant on commodity exports. But in the long term, sanctions would help push the government and affected companies to adopt more sustainable practices and new activities that could create better jobs and prevent catastrophic environmental collapse.

“We want international authorities to pressure the Brazilian government,” says Kopenawa, the Indigenous leader. “Do not buy the wood, oil, gold, and cattle that come from Indigenous lands. They are all the blood of the Indigenous people.”