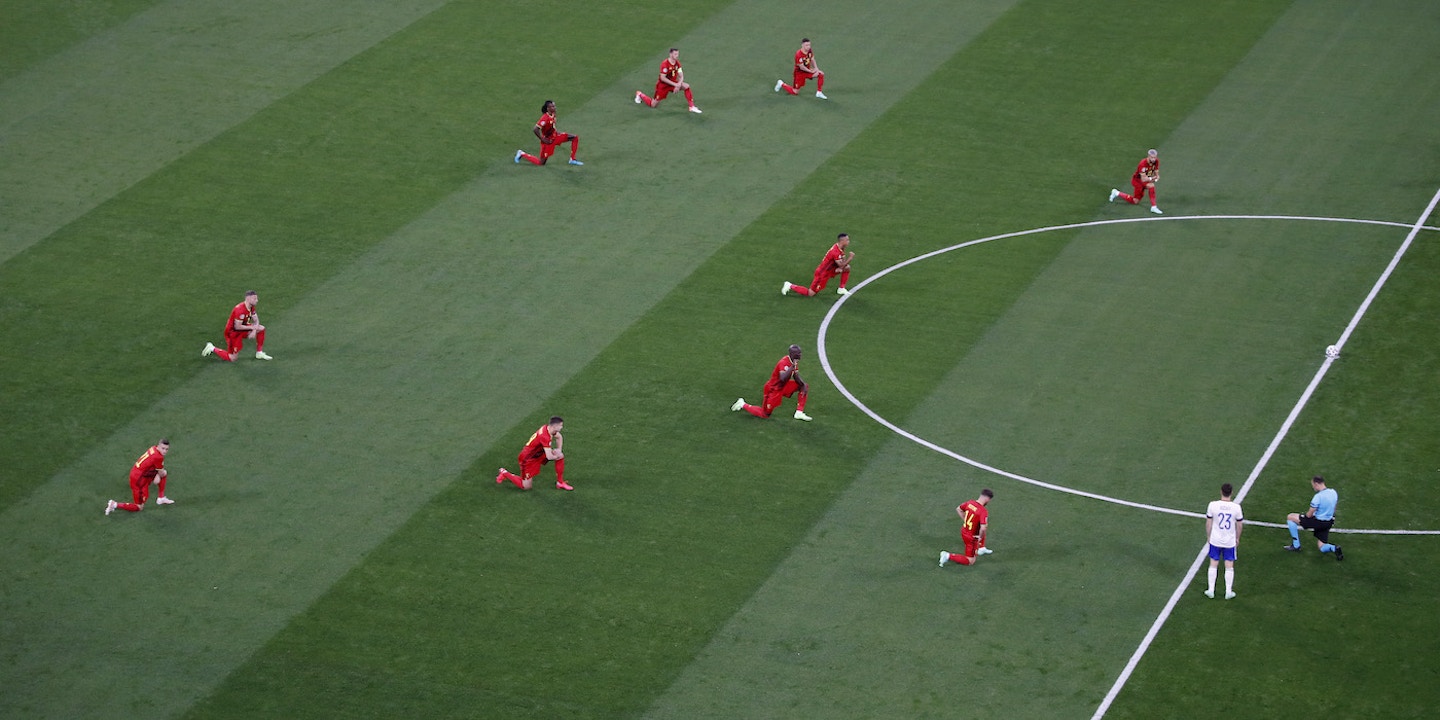 A smattering of boos was drowned out by applause in London’s Wembley Stadium on Sunday, as England’s best soccer players were both jeered and celebrated by their fans for taking a knee to protest racism before the national team’s match against Croatia in the European Championship tournament.

While the Croatian players chose not to make the gesture, the Italian referee and his assistants joined the English team and their coaching staff in kneeling for a few seconds before kickoff.

One day earlier, there had been much louder boos when Belgium’s multiracial national team, joined by Spanish match officials, had taken a knee before playing Russia in St. Petersburg in the same tournament.

Last week in Budapest, which is one of the host cities for the tournament, Hungarian fans booed Ireland’s national team for the same gesture before a warm-up match against Hungary.

The Republic of Ireland's players were booed and jeered by some Hungary fans as they took a knee before kick-off in their friendly in Budapest. pic.twitter.com/15npHfKZcE

The dissent from a section of the crowd in London on Sunday was noticeably less intense than it had been before two pre-tournament matches in Middlesbrough last week, when the English players were jeered along with the national teams of Austria and Romania which joined them in kneeling.

That pitiful display, from fans unable to separate racism from patriotism, had prompted an articulate plea for tolerance from the England manager, Gareth Southgate, who said that the squad was united in its determination to keep taking a knee throughout the tournament.

The English Football Association, the sport’s governing body, then explicitly connected the booing to racist abuse directed at Black players on social media in a video message that urged fans to unite behind a team representing a multiethnic, multiracial England.

All of us. All of you. pic.twitter.com/VtQ1quXpvg

While the jeering racists were largely drowned out on Sunday — and England won the match, thanks to a goal created by a player of Jamaican and Irish descent and scored by a Londoner who was born in Jamaica — it was hard not to notice, as Daniel Taylor of The Athletic observed, “that the bar is set particularly low these days if English football feels this pathetically grateful that this week’s booing of anti-racism was not as loud as last week’s.”

It is also hard to miss the extent to which this entire scenario, now repeating itself in nation after nation across Europe, is an offshoot of America’s culture war.

Turning Point UK, an offshoot of the American pro-Trump youth organization, gleefully shared video of fans booing on social media, although the right-wing activists had to cut away abruptly from the original BBC video just three seconds into the protest, to conceal from viewers that the boos were quickly overwhelmed by cheers.

The gesture, inspired by the blacklisted NFL quarterback Colin Kaepernick’s defiant protest, has been part of the pre-match ritual at soccer matches in England since last June. As racial justice protests spread worldwide following the murder of George Floyd, David McGoldrick, a Black British player with Irish roots, suggested that players should take a knee before kickoff.

The idea quickly spread across the country, and for months, players knelt in somber silence, in stadiums kept empty during the height of the coronavirus pandemic, many of which added signs displaying the slogan “Black Lives Matter.” But since the return of fans to English stadiums, loud boos and angry shouts have frequently been heard as players took the knee.

In heated debates online and across the airwaves, far-right figures in England, like the pro-Brexit campaigners Nigel Farage and Darren Grimes, have refused to draw the obvious conclusion that people who are incensed by an anti-racist protest might just be racist.

Why are people angrier at footballers protesting racism, than racism in football?#TakeTheKnee #BlackLivesMatter #Euro2021 pic.twitter.com/nxNQTkItC1

To defend the English fans jeering their own players, Farage and Grimes have drawn attention to the fact that Patrisse Cullors, the American activist who turned the phrase Black Lives Matter into a Facebook hashtag in 2013 — following the acquittal of Trayvon Martin’s killer, George Zimmerman — once described herself as a Marxist.

Although the English, Belgian and Irish players have made it clear that they are kneeling to show support for anti-racist protesters united by the slogan “Black Lives Matter,” rather than the Black Lives Matter Global Network Foundation co-created by Cullors, Farage and Grimes argue that the booing fans are not racists, just staunch opponents of Marxism.

Gareth Southgate is out of touch with England fans.

They have a right to boo when players take the knee for Marxist BLM.

Let's keep politics out of football this summer. pic.twitter.com/7kISwKITKe

Once again the fans are making their voices (or boos) heard. Why are we adopting this knee bending fad from America – and in the face of opposition by many fans? It's time to stop this divisive act propagated by a mad Marxist cult. pic.twitter.com/8YxPv6mwTr

The idea that ultranationalist soccer fans, who have aimed racist jeers at nonwhite players for years, are really engaged in ideological debate has been widely ridiculed, but conspiratorial fears about the supposedly hidden influence of “cultural Marxism” have been deeply embedded in far-right thinking for decades and were cited repeatedly in the manifesto of the far-right Norwegian gunman Anders Breivik, who killed 77 people in 2011.

Still, far-right activists, including the actor-turned-politician Laurence Fox, continue to invoke Marxism as a specter haunting Europe a decade after Breivik’s killing spree.

Proud of every single fan who booed. I hope gets louder as more fans come back into the stadiums.

Taking the knee to a Marxist cult that hates everything Britain and England stands for is embarrassing beyond belief. https://t.co/2wgg6Dpjuk

A handful of fans even gathered outside the stadium on Sunday beside a version of the national flag with the slogan “Don’t Kneel for Marxism” scrawled on it. One man standing near the flag wore a Trump-style red cap, complete with the phrase “Make Britain Great Again.”

Protestors against taking a knee have gathered outside Wembley. “Don’t kneel for Marxism” says the flag. One woman insisting to “boo like crazy” when the knee is taken. pic.twitter.com/RZAxyc8IJ1

Unfortunately for Farage and Grimes, an explicitly white supremacist, anti-immigrant group with rhetoric that closely echoes Breivik also turned up at the stadium to urge players to “Stop kneeling for migrants & their descendants!”

Patriotic Alternative went to Wembley with a message for @England ahead of their match against Croatia.

The reaction from Belgian and Hungarian politicians has also echoed the rhetoric of the American far-right. Filip Dewinter, the former leader of Vlaams Belang, a xenophobic Flemish party with thinly veiled white supremacist beliefs, exulted over video of fans of the English club side Millwall booing their own players as soon as they were allowed back into their stadium in December.

Tom Vandendriessche, a member of the European parliament for Dewinter’s party, shared a meme on Twitter last week that showed the Hungarian crowd booing the Irish team over the words “All Lives Matter,” and added the comment: “BLM = racism.”

“The fact it was booed was incomprehensible,” Ireland’s manager, Stephen Kenny, said after that match. “It doesn’t reflect well on Hungary and the Hungarian support,” he added. The Irish striker Adam Idah, whose father is Nigerian, was also shocked. “Obviously, it’s disappointing to see the fans and the whole stadium booing us taking the knee,” he told reporters. “It’s for a good cause, trying to stop racism. It’s a sign to kick racism out of society and just the reaction was very disappointing for us. We weren’t expecting that.”

Viktor Orbán, Hungary’s xenophobic prime minister, responded by attacking the Irish team that traveled to Budapest to help the Hungarians prepare for the tournament. “If you are a guest in a country, then understand its culture, don’t provoke the locals, don’t provoke the host if you visit as a guest,” Orbán said. “We can’t interpret this gesture in any other way,” Orbán added, than as “a provocation.”

The Hungarian prime minister then suggested that since Hungary never had slaves, its citizens have no responsibility to combat racism.

After the Belgian national team took the knee in Russia on Saturday, before a 3-0 win, Vandendriessche tweeted that the Russian players, who remained standing during the protest, had lost the game “but at least not their dignity. Kneeling is submission. BLM is pure racism. ALL lives matter!”