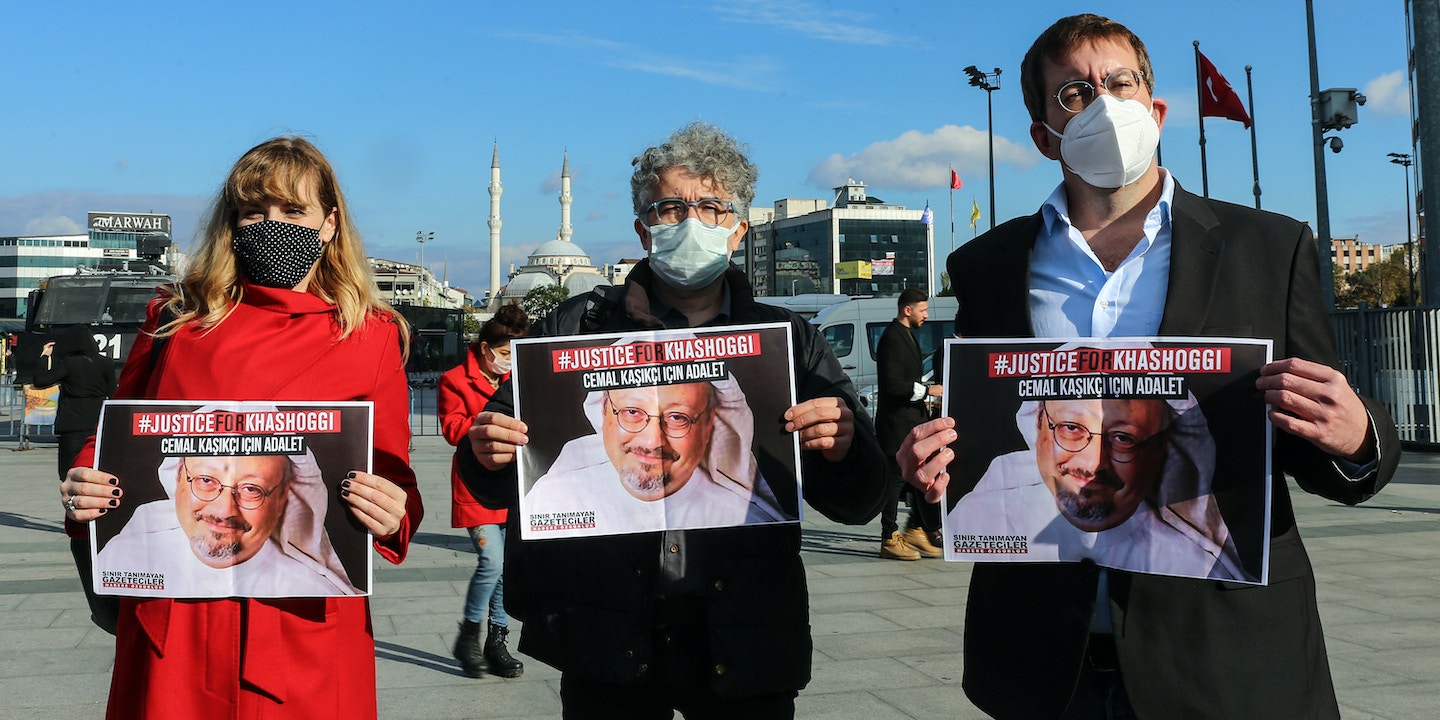 The firm that trained Jamal Khashoggi’s killers in the U.S. under a State Department license is owned by a private equity executive who has pumped over $3.2 million into pro-Trump groups since 2016.

The New York Times reported Tuesday that Tier 1, a subsidiary of Cerberus Capital Management, had trained some of Khashoggi’s killers, members of an elite Saudi squad tasked with defending Saudi Crown Prince Mohammed bin Salman. The training had begun under the Obama administration, and in fact was approved by the State Department, and it continued at least into President Donald Trump’s first year.

The Intercept reported last year on the connections between Khashoggi’s killers, Tier 1, and Trump. With new documentation provided by Louis Bremer, a senior executive at Cerberus and a former Trump nominee for a Pentagon special operations post, the Times’ Tuesday story confirmed Tier 1’s role in the recent training of four of the kill team’s seven members. Cerberus Capital Management CEO Stephen Feinberg’s donations to Trump in 2020 have received scant attention thus far, and prior coverage of Trump’s response to the killing and approach to U.S.-Saudi relations have not connected the two.

Feinberg donated $1.475 million in 2016 to Rebuilding America Now, a pro-Trump super PAC headed by then-Florida Gov. Rick Scott. At the tail end of the 2020 election, on November 2, Feinberg donated $1 million to America First Action, the main pro-Trump super PAC, and an additional $725,000 to the Trump Victory Fund. President Joe Biden’s 2020 campaign received a little over $150,000 in donations from Cerberus employees, but that includes small-dollar donations from lower-level employees, and no Cerberus executives donated to pro-Biden super PACs.

Two years earlier, in May 2018, Trump had appointed Feinberg to lead the President’s Intelligence Advisory Board, an obscure 65-year-old body of appointees who are not federal employees but nonetheless have access to state secrets. The Times reported in 2020 that an unnamed intelligence official said questions from the board would sometimes be “related to their business dealings,” implying that members would intertwine their personal financial interests with the public’s business. While Feinberg chaired the board, he was also reportedly friendly with Jared Kushner, the former president’s son-in-law known for his close relationship with Salman.

After Khashoggi’s murder, Trump repeatedly raised doubts about Salman’s role in the assassination. “Our intelligence agencies continue to assess all information, but it could very well be that the crown prince had knowledge of this tragic event — maybe he did, and maybe he didn’t! That being said, we may never know all of the facts surrounding the murder of Mr. Jamal Khashoggi,” Trump said in November 2018. Yet privately, Trump appeared to boast that he was able to intervene on Salman’s behalf. According to journalist Bob Woodward’s 2020 book “Rage,” Trump said of the crown prince: “I saved his ass. … I was able to get Congress to leave him alone.”

But Salman’s role in Khashoggi’s killing is now common knowledge. The Office of the Director of National Intelligence released a report in February that determined that “Saudi Arabia’s Crown Prince Muhammad bin Salman approved an operation in Istanbul, Turkey to capture or kill Saudi journalist Jamal Khashoggi.”

In the aftermath of the assassination, a group of 22 senators demanded that Trump investigate the murder pursuant to the Global Magnitsky Act, which mandates that the president produce a report determining whether foreign nationals have engaged in extrajudicial killings or other extreme human rights violations, along with a statement about whether or not the president intends to apply sanctions to those individuals. Trump declined to produce the report, citing a 2016 signing statement — that is, a written pronouncement issued by the president upon the signing of a bill into law — by his predecessor, in which former President Barack Obama maintained “discretion to decline to act on such requests when appropriate.” Trump had not produced a report by the initial deadline of February 8, 2019, and it appears that he never did.

Just two months after the deadline to produce the report, the major defense contractor DynCorp announced that it had received a new $21 million contract from the Saudi Arabian National Guard. Until November 2020, when it was acquired by Amentum, DynCorp was owned by Cerberus. Since 2015, Saudi Arabia’s military — with support from the United Arab Emirates, the Pentagon, and contractors like Dyncorp — has been waging a deadly war in Yemen that has killed 130,000 people, including, at bare minimum, 2,300 children. Cerberus did not respond to The Intercept’s request for comment. Feinberg did not respond to a request sent via a law firm that has represented both Cerberus and a foundation that he led.

Though this particular case is grisly and high stakes, a central component of the problem lies in a simple and familiar area, according to Craig Holman, an ethics lobbyist with the watchdog group Public Citizen. Holman pointed to the controversial 2010 Supreme Court decision in Citizens United v. Federal Election Commission, which created super PACs and gutted regulations on campaign finance, as having strengthened the ability of powerful private interests to determine the scope of American foreign policy.

“Citizens United opened the spigot for unlimited campaign donations by corporations and wealthy individuals to outside groups to influence elections, allowing megadonors to endear themselves to presidents and lawmakers,” Holman told The Intercept.

Feinberg’s large campaign contributions “enabled” him “to help shape American foreign policy,” Holman continued. “His businesses profited handsomely from selling military training to the Saudis responsible for the killing of Jamal Khashoggi, and Trump steadfastly refused to punish the Saudis for this murder or to limit private military contractors, like those in which Feinberg had a financial stake, from continuing their lucrative business relationships with foreign governments, sometimes even with those known for egregious human rights abuses.”

The Biden administration has also been reluctant to fully punish Saudi Arabia for the Khashoggi killing or to stop military cooperation with the Saudi war in Yemen, which has led to a humanitarian catastrophe. Employees of Hogan Lovells, Saudi Arabia’s top lobbying firm in Washington, D.C., donated $346,000 to Biden’s campaign in 2020, according to data from OpenSecrets. In March, the State Department announced the “Khashoggi Ban,” a rule that allows the department to sanction individuals it finds guilty of “transnational repression.” It has not been used to sanction the crown prince.