“You’re going to have a division in the country, you’re literally going to have pro-life and pro-death states,” Johnson told a group of GOP activists. 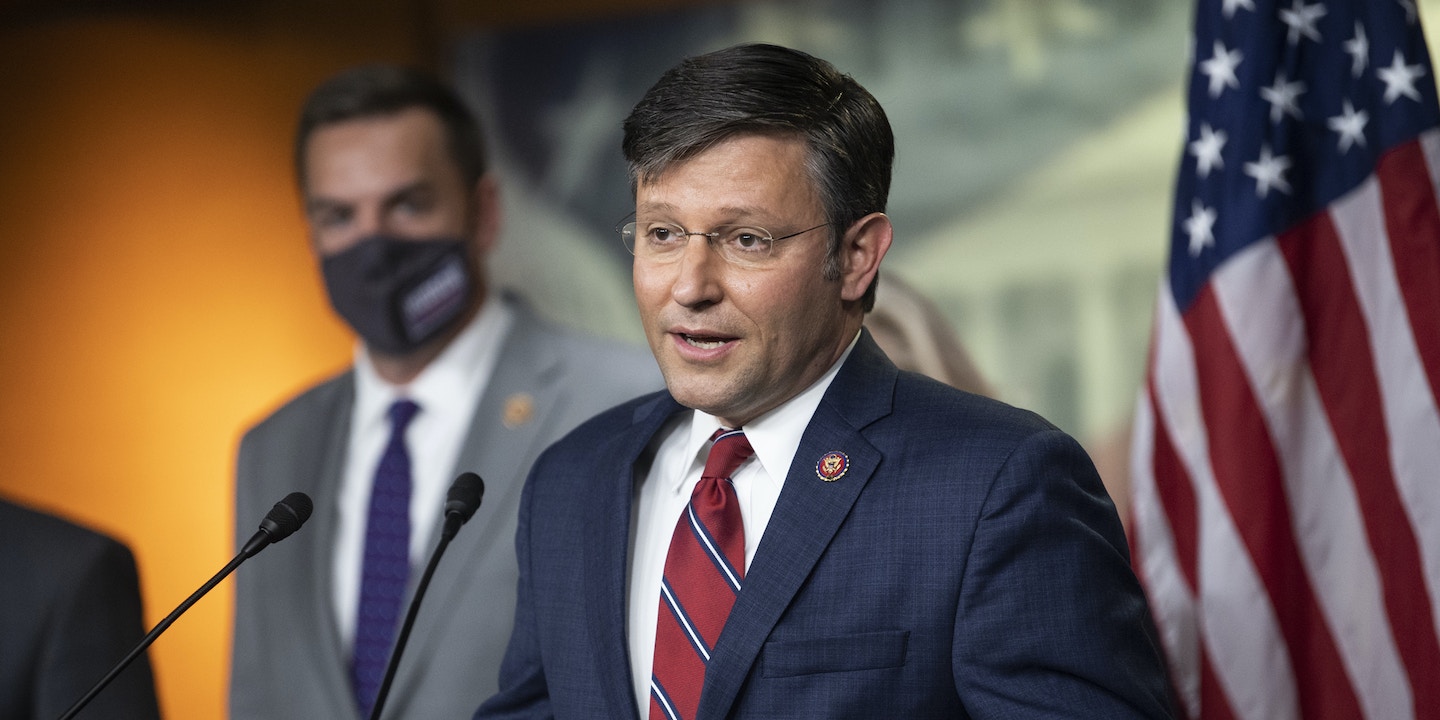 In a closed-door meeting with a group of activists in Washington, D.C., on Tuesday, Rep. Mike Johnson, R-La., expressed his confidence that Supreme Court Justice Amy Coney Barrett would help Republicans make good on their long-sought effort to overturn Roe v. Wade.

Johnson’s remarks, which were recorded by advocacy journalist Lauren Windsor of The Undercurrent, were part of a daylong conference presented by Patriot Voices. Other Republican speakers that day included Reps. Andy Biggs, R-Ariz.; Gary Palmer, R-Ala.; and Jim Banks, R-Ind.

Johnson has long stumped for Barrett, whom he’s known for 30 years, having voiced his support for her nomination to the Supreme Court in 2020. “I’ve known Amy Coney Barrett since high school. We go way, way back,” Johnson told the attendees. “And I was one of the guys pushing Trump really, really hard to put her on the court.”

Barrett’s confirmation to the Supreme Court in October 2020 solidified conservatives’ majority on the nation’s highest court. She believes in an originalist interpretation of the Constitution, much in the image of late Justice Antonin Scalia.

“If you look at [Roe] from the originalist perspective, which all of [the conservative Justices] are now espousing, you know, it’s indefensible,” said Johnson, who since 2016 has served as vice chair of the House Republican Conference, the GOP caucus responsible for communicating the party’s message to members of the House. “And it goes back to the states, and then we have the real battle, because states like Louisiana, we have it in our state constitution that if the decision returns to the states, we’re a 100 percent pro-life state.”

Johnson predicted a fissure between pro- and anti-abortion states in post-Roe America. “There are also though, frighteningly, some states that you can guess which states they are — maybe you have friends watching from those states — they’re going to go the opposite end: full late-term, all out abortion-on-demand,” he said. “You’re going to have a division in the country, you’re literally going to have pro-life and pro-death states. I’m optimistic to believe that people will go and follow where life flourishes.”

Johnson’s assertions come as no shock to pro-choice advocates. “While we are deeply disturbed by Rep. Johnson’s recent comments outlining an imminent plan to overturn Roe v .Wade, we are not surprised,” Christian F. Nunes, president of the National Organization for Women, said in a statement. “He and his colleagues believe they have the right to control what women do with their own bodies, but our grassroots activists will fiercely oppose any attempts to restrict reproductive freedom through dangerous and archaic legislation and regulations.”

In addition to his comments on Barrett, Johnson spoke about the need for grassroots Republican efforts that can compete against Democrats. “They were doing community organizing for a long time, and it was very effective. They raised up a whole generation of millennials, and of course they’re being indoctrinated in the public school systems and all that. That’s what we’re competing against. So we have to be able to present these truths in plain language,” he said. “We’re still a center-right country. We may not all wear sweater vests with Santorum on but we got to keep fighting.”

Asked by Windsor during the meeting to lay out the top three priorities should Republicans win back the House, Johnson highlighted the conference task forces that House Minority Leader Kevin McCarthy unveiled on Wednesday, which are tasked with crafting policy along such issues as “Big Tech censorship,” the “future of American freedoms,” and health care.

“It sounds like you’re dodging,” Windsor responded with a chuckle.

“I’m not dodging,” Johnson answered, “I don’t want to get out in front of my leader and tell you what they are.” When pressed further, Johnson identified inflation, immigration, and abortion as the most important issues in “the hearts and minds of people.”

“Those are American issues,” he said.

A spokesperson for Johnson declined to comment on the representative’s remarks.