At 245, America Is Old Enough to Be Honest About Its Founding

The Declaration of Independence’s clause about “merciless Indian Savages” and its deleted passage on slavery say a lot about us. 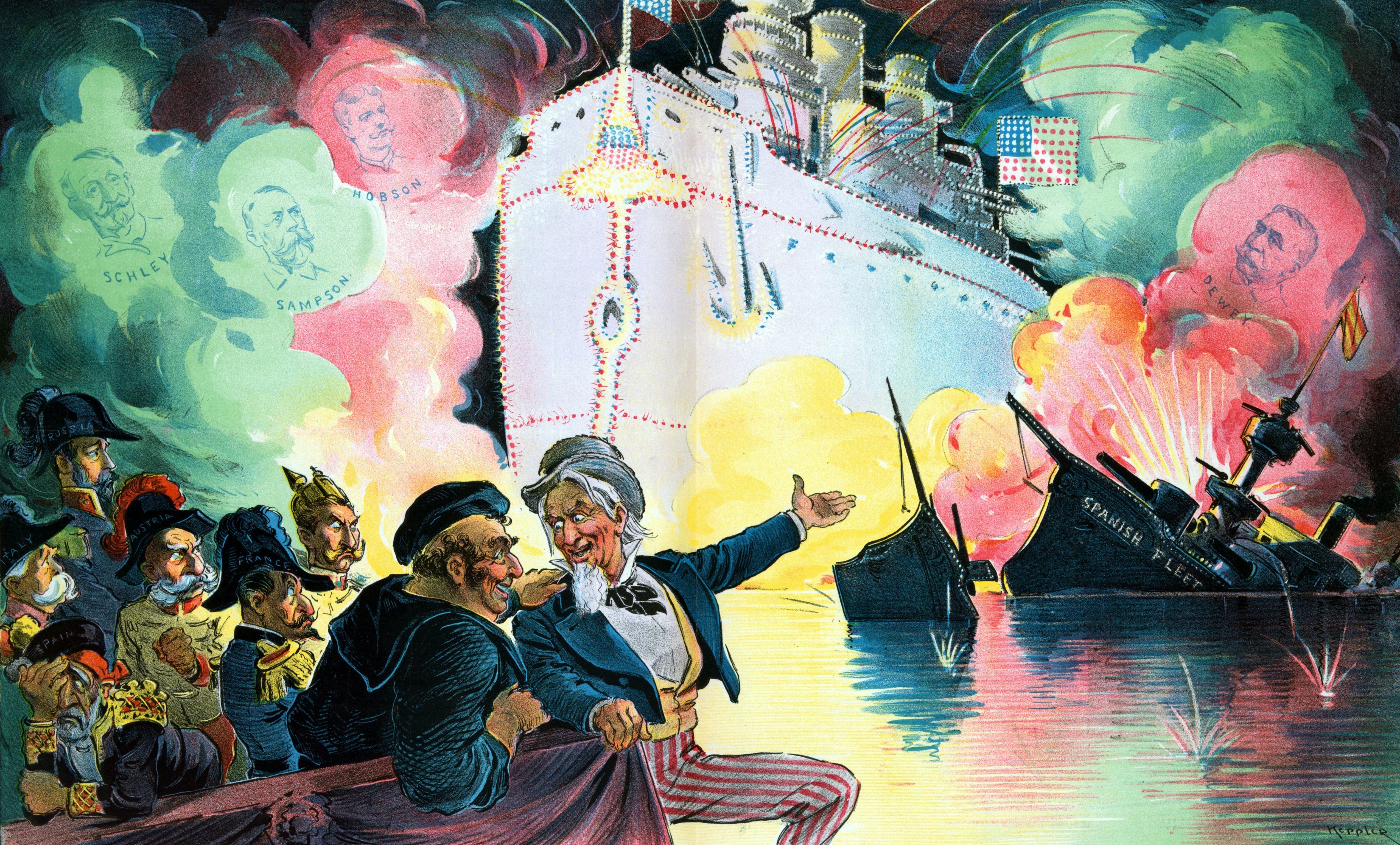 An illustration by Udo Keppler, “The Triumph of the American Battle-ship,” depicts the celebration of the Fourth of July in 1898.

Happy Birthday, America! Today, July 4, 2021, we turn 245 years old. You might think we’d have trouble blowing out all the candles on the cake, but fortunately we can use the downdraft from the Sikorsky S-97 Raider, a new prototype attack helicopter with two rotors that spin in opposite directions.

And now that we’re 245, it seems as though we should be old enough to take an honest look at various dumb and awful things about our birth, and stop believing in preposterous myths.

While the American Revolution officially began at Lexington and Concord in Massachusetts in April 1775, for some time afterward complete separation from Great Britain was only supported by a fervent minority. However, nothing works as well as killing and being killed to make everyone believe the other side are irredeemable monsters. By June 1776, public sentiment favored a total break.

The Declaration of Independence was drafted by Thomas Jefferson, with edits by several others, including John Adams and Benjamin Franklin. It is Filled with The kind Of unpredictable Capitalization that was Common before English Was Standardized, and accuses King George III of attempting to impose both “absolute Despotism” and “absolute Tyranny” on the 13 Colonies. With the benefit of hindsight, many of the complaints make this seem like the kind of excitable language you employ to justify a decision you’ve already made. For instance, King George “called together legislative bodies at places unusual” for “the sole purpose of fatiguing them into compliance.” Bad, maybe, but not the worst crime in human history. This style of wild rhetorical exaggeration survives today among Americans who proclaim that the phaseout of incandescent lightbulbs is exactly like what Hitler did.

The most interesting parts of the declaration are two complaints, one that made it into the final version and one that did not. The one that did make it in is the final entry on the list of indictments of King George: “He has excited domestic insurrections amongst us, and has endeavoured to bring on the inhabitants of our frontiers, the merciless Indian Savages, whose known rule of warfare, is an undistinguished destruction of all ages, sexes and conditions.” This is the kind of thing that makes you wonder whether Sen. Josh Hawley, R-Mo., who just condemned the idea that the U.S. was “founded in racism,” has ever read the Declaration of Independence. He may also never have heard of George Washington, who once told a friend that Indigenous people in the Americas and wolves were both “beasts of prey tho’ they differ in shape.”

Then there is the clause about slavery in Jefferson’s original rough draft of the declaration. King George, said Jefferson, had “waged cruel war against human nature itself, violating it’s most sacred rights of life & liberty in the persons of a distant people who never offended him, captivating and carrying them into slavery in another hemisphere, or to incur miserable death in their transportation hither.” This seems like conclusive evidence that white Americans were capable at the time of grasping the concept that slavery was evil. Thus judging those who engaged in it is not “presentism,” in which we impose today’s moral standards on the past.

Of course, Jefferson himself owned at least 600 slaves during his life. Presumably he understood they were not working his plantation by choice, just because they wanted him to have more free time for philosophizing. Jefferson squared this circle by also condemning King George for “now exciting those very people to rise in arms among us, and to purchase that liberty of which he had deprived them, by murdering the people upon whom he also obtruded them.” First, King George forced people like Jefferson to enslave human beings, which they never would have done otherwise! And now King George was making these enslaved humans believe it was terrible to be enslaved, something they never would have figured out on their own! This was Tyranny in its purest form.

Decades later in 1821, Jefferson wrote that the slavery clause had been removed by the full Continental Congress “in complaisance to South Carolina and Georgia. … Our Northern brethren also, I believe, felt a little tender under these censures, for though their people had very few slaves themselves, yet they had been pretty considerable carriers of them to others.” GOP-controlled state governments that today are cracking down on the teaching of history might want to bar Jefferson’s first point but emphasize his second to own the libs. New York City, the capital of liberalism, had one of America’s largest slave markets on Wall Street for much of the 18th century and continues to have many streets named after prominent families of the era that enriched themselves in the trade.

None of this means that the U.S. is uniquely dreadful; the foundings of other countries were similarly bloody and hypocritical. But it does mean that when we’re tempted to bloviate about our unique goodness that we should probably cool it.

And obviously there are some good parts in the Declaration of Independence, ones so universally inspiring that Ho Chi Minh copied them directly when he wrote a Proclamation of Independence for Vietnam in 1945. America was so touched by this that a few years later we considered giving France a few nuclear weapons to drop on Vietnam.

The declaration today resides at the National Archives in Washington, D.C. It’s barely legible but is still worth a visit as an opportunity to be honest with ourselves about what our history’s truly about. It wasn’t created by a race of perfect angels, but by people who were just as sweaty, confused, and occasionally drunk as we are. Just like us, they had grievous faults and intermittent noble aspirations. And if they could change the world, and they definitely did, we can too.