In 2020, a young father in Idlib, Syria, posted a video of himself teaching his four-year-old daughter to laugh when she heard incoming bombs. In the video, a strike can be heard, then the little rosy-cheeked girl, standing on a couch next to her father, erupts into laughter. Between squeals, she says, “Yes, it’s very funny!”

The video captures the paradox of Syria: Amid pervasive suffering, destruction, and death, life somehow continues. This pained perseverance is poignantly captured in “Witnesses to War: The Children of Syria,” a new book of photography by Bassam Khabieh.

In 2011, when the conflict began, Khabieh was compelled to begin taking photographs not because he wanted to be a photographer, but because he was uniquely situated to document his own community and the horrors it was enduring. As an insider whose photographs were soon distributed throughout the world, Khabieh became a photojournalist who refused to look away as his country began to burn around him. He took photographs of his friends, relatives, and community as they succumbed to bombings, chemical attacks, and the immiseration of blockades and a ruthless war of attrition.

With his first book, Khabieh asks the audience to look at what he has seen — not out of a pointless sadism, but in a call for more witnesses, for more accountability, and for justice. “Witnesses to War” implores those who open its pages to see what has been committed and what has been lost.

“I want to tell the world, wherever they are, that innocent people shouldn’t be exposed to death machines for 10 continuous years without intervention from the international community,” Khabieh told The Intercept. “I’m not talking about fighters and armies. I’m talking about a society that was destroyed by war machines … including the United States, France, Germany, Russia, Turkey. Everybody came to Syria and started bombing everything. They didn’t differentiate.”

The images in this book don’t glorify men readying for a fight; there are no tanks rolling through the dust or guns lofted into the sky. Instead, it is a record of what the world — for it is at all of us that Khabieh aims his camera — has allowed to happen to the innocent infants and children of Syria. 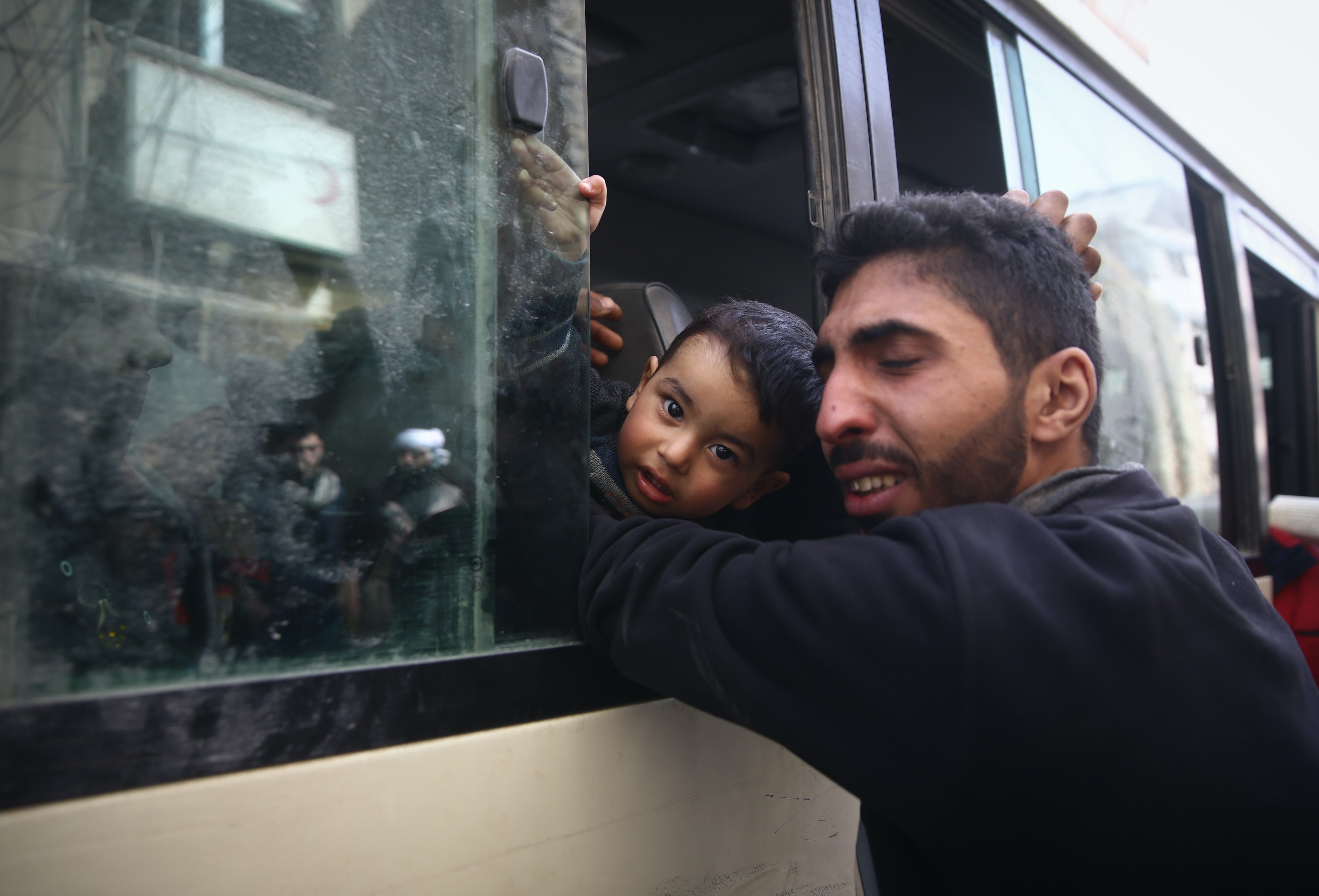 A man hugs his child before the boy is evacuated during a break in the bombing campaign in Douma, Syria, on March 19, 2018. The negotiations between the government and the rebels holding Eastern Ghouta forced many men to separate from their children and families.

Neither a snapshot nor a single article can capture the scope of the relentless, and ongoing, bombing of Syria. As civilian-captured footage of the war proliferated on the Internet, so did the danger of misrepresentation, propaganda, and the glorification of violence.

Khabieh’s photographs do something altogether different: They both document the unspeakable and aestheticize critical evidence of crimes against humanity. Even as Khabieh’s photographs document war crimes committed with impunity, they are also gentle, composed with a calm eye, and beautiful. The beauty is why, ultimately, we choose to look.

Explaining why he chose to focus the project on children, Khabieh said, “In every attack, there is always an injured child. The Syrian regime came for the families, to vanish them, to put pressure on the armed groups.”

Though the stranglehold of violence on Syria is hard to fathom, some numbers do help. After more than 10 years of war, there have been at least 5,000 children killed, about 4,000 severely injured, the same number recruited as child soldiers, and over 5 million children forcibly displaced.

Yet these numbers fall far short of explaining the real impact of the war, which both takes a profoundly traumatic toll on each person who lives through it and deals an incalculable and permanent blow to families and communities — the social fabric rent into a threadbare rag. This is the true power of what Khabieh has captured: the shocking individual suffering in the foreground and the devastation of society lurking in the background.

In one photograph, which delivers a slow shock, four young children are seen riding on a miniature merry-go-round, seemingly preoccupied by lollipops and popcorn, except for one little girl staring fixedly, almost defiantly, past the lens. The viewer realizes that the kids are not sitting atop garlanded horses but remnants of Russian bombs. The foregrounded content of army-green shells replacing the marvel of the carousel would be enough to drive home the impact, but the more one looks, the more the context sinks in. The kids are not in the outdoor sun but in what feels like a low-ceilinged basement or bunker — where they were spending their celebration of Eid al-Adha, one of the most important and joyous Muslim holidays.

One can’t help but think of how familiar the kids must be not only with unexploded ordnance but also with the exploding kind. In Syria, even “the sky is deadly,” Leslie Thomas and Amy Yenkin write in the introduction to “Witnesses to War.”

Many of Khabieh’s photographs are of children at play. That play — or, less frequently, the schooling — is always in the shadow of destruction: kids goofing around in a bombed-out bus; a little girl in a sparkly butterfly headband on top of a mountain of debris; a toddler balancing on a tire in front of a robin-egg blue, bullet-shredded wall; an eager pupil, missing an arm, standing up from his desk.

Or the children are dead: limp bodies held in their parents’ arms; small lined-up bundles wrapped into knotted-off sheets; a tiny, loose-fisted hand caked in blood and plaster dust.

“This book was made to show people how much this war has affected an entire generation of Syrian children,” Khabieh said. “Some people were born and lived and died and knew nothing other than war.” A boy sits on a tire in front of a mosque’s bullet-riddled facade on the first day of Eid al-Adha in Douma, Syria, on Oct. 4, 2014. The hand of a dead child is pictured after shelling in the rebel-held besieged town of Douma, Syria, on Oct. 20, 2016.

The regime of Syrian President Bashar al-Assad, which has violently taken back effective control of much of the country, maintains the population under its thumb. The country’s economy is in a state of decay that nearly rivals the bomb-shattered infrastructure. Even in areas no longer experiencing direct fighting, the threat of arrest and disappearance on behalf of the regime always looms.

The threat is not only from Assad or the splintered militias pitted against his regime and each other in Syria. The United States, Russia, and Iran continue to use the country as a proxy battleground. The first airstrike ordered by President Joe Biden, allegedly against Iran-backed militias, was carried out in Syria. In Biden’s second strike, in late June, the United States dropped multiple 500- and 2,000-pound bombs on buildings in Syria, again ostensibly targeting Iran-backed militias.

Eastern Ghouta, where Khabieh took many of the book’s photos, has suffered some of the worst of the conflict. In 2018, he took a photo of a mother putting her finger in the mouth of her two-month-old daughter to try to stave off her cries of hunger. Ghouta was under a sustained blockade, and the family was desperate for food. They ventured out of their home to a market, arriving just when it came under attack. The blood on the mother’s hand, the same with which she pacifies her infant, is from her son, who had just been struck and killed at the market. We get the details from the caption, but they are more painfully present in the photo: the wide and empty gaze of the infant, the futile bundle of gauze held in the foreground, and the staid look in mother’s weeping eyes — as if all the world had been just ripped away from her. Heba Amouri places her finger in the mouth of her hungry two-month-old infant at a medical center in the besieged town of Douma, Syria, on Jan. 8, 2018.

“I didn’t become a photographer because I wanted work,” Khabieh said in a 2018 interview included in the book. “I learned it with war. Photography came with war.”

Khabieh’s photographs may not portray all the nuances of the brutal political tangle that his country has become, but they do capture the emotional nuances of a population that has lived through a decade of obscene violence. The viewer sees it in the carpet laid out over a pile of rubble for girls and their mothers to break their daylight fast in Ramadan. Life, when it is not crushed by a caved ceiling, shredded by a barrel bomb, or suffocated by a gas attack, carries on. That life — resilient, furious, sometimes even exultant or joyous — is what Khabieh repeatedly captures.

“Life is precious,” Khabieh said, reflecting on what inspired his work and his focus on children. “We have to seek justice for those who died. If we don’t, this could happen anywhere.”