How Sirhan Sirhan Was Mentored Through Parole by Suge Knight, Mafia Leaders

“I’m a global villain myself, people think I killed Tupac, and that was Tupac. You killed a Kennedy,” Suge Knight told Sirhan. 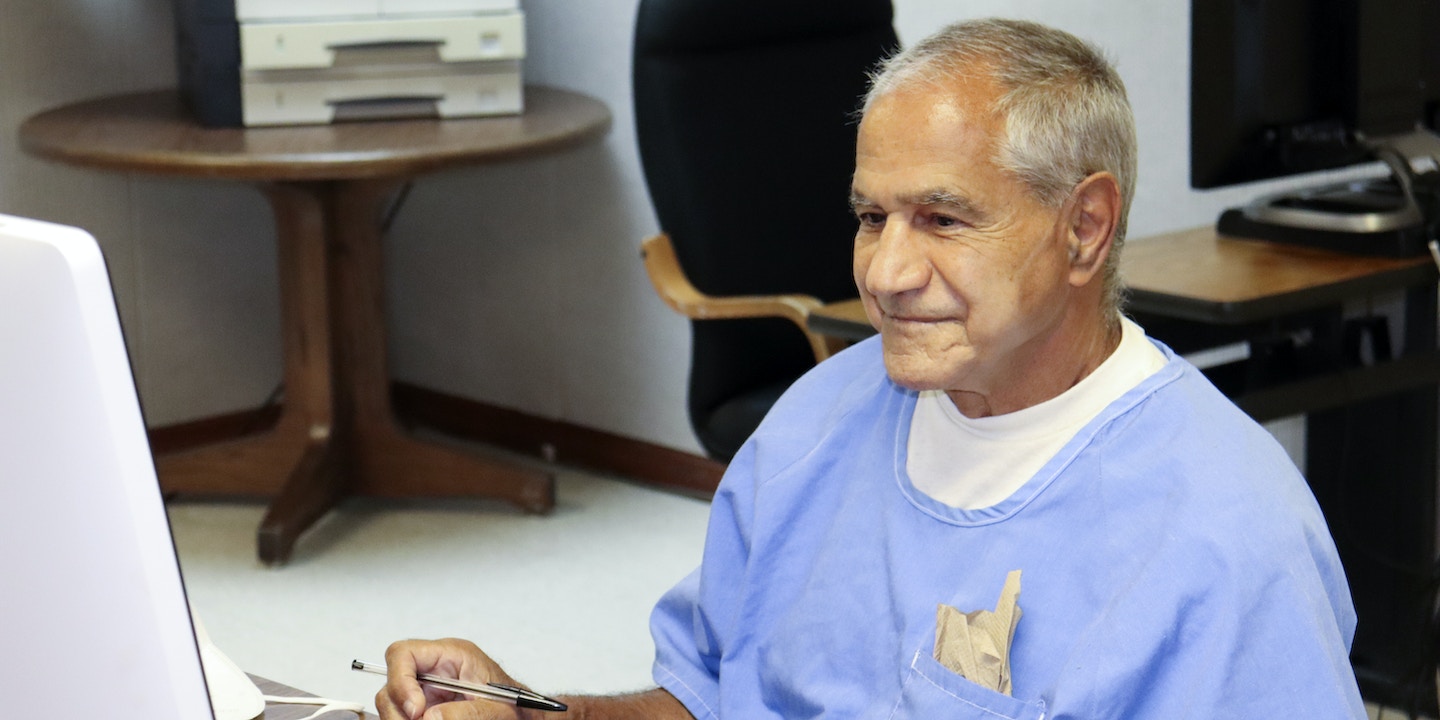 When Sirhan Sirhan appeared at his parole board hearing in late August, he brought with him the memory of multiple failed attempts — 15 in 53 years — that had left the convicted murderer of Robert F. Kennedy no closer to release. His problem, he had become convinced, lay in his prior inability to accept responsibility for that which he knew that he had done.

Sirhan has long claimed that he has no memory of the moment Kennedy was killed. He has also long acknowledged that he brought a loaded gun to the presidential candidate’s California primary victory party in 1968 and that he drank heavily that night. But it took a yard full of fellow convicts to walk him toward a place where he could accept responsibility for the decision to bring the gun to the party, without which, he told the parole board, the crime couldn’t have been committed.

Accepting that responsibility and shedding his defensiveness was key to winning the support of the parole board, which recommended parole for Sirhan on Friday. Sirhan no longer presented himself as the victim of circumstance or lashed out against aggressive questioning — guaranteed ways to lose at a parole board hearing. Sirhan was originally sentenced to death row for the murder of RFK, but his sentence was commuted to life in prison with the possibility of parole when California briefly outlawed the death penalty in 1972.

Sirhan didn’t arrive at those epiphanies alone. A team of fellow prisoners at the Richard J. Donovan Correctional Facility in San Diego County collectively took up his cause, coaching and mentoring him through a prisoner-run organization called Redemption Row. They even conducted extensive mock parole board hearings to dissect his responses and redirect him toward a more empathetic place.

The collection of prisoners who guided Sirhan couldn’t have made a more unlikely crew: Joel Baptiste, a former leading figure in the Aryan Brotherhood, in for life for murder; Suge Knight, the founder of Death Row Records, serving 28 years for manslaughter; Mexican mafia leader Arturo Guzman; Roque Martinez, a top boss in the notorious crime syndicate Nuestra Familia; Cameron Morris, a former member of the Crips; and Michael Goodwin, convicted of the high-profile killing of Mickey Thompson and his wife in the couple’s driveway.

Each of his fellow inmates, in turn, was able to show Sirhan that they shared his experiences, said Jen Abreu, head of Redemption Row.

Knight, for instance, was able to speak to Sirhan about the experience of being globally despised, being something of an anti-celebrity. “I’m a global villain myself, people think I killed Tupac, and that was Tupac. You killed a Kennedy,” Knight told Sirhan, according to Abreu.

“Suge has to carry that,” said Baptiste, who has become friends with the former rap mogul, in a phone interview from prison. “He was able to talk to Sirhan about, I know what it’s like being ‘the guy,’ being hated or blamed for this or that, oftentimes erroneously. He was able to identify with him on that level. The biggest thing you can do for a man in prison is look at him and say you’re not alone, man, you’re not alone, I’m standing with you, and we’re going to do this process and do it together.”

Baptiste said his crew put the word out that Sirhan, whose throat was slashed in an assault in 2019, was not to be touched. Once Sirhan felt physical safety, opening up became easier.

Knight helped Sirhan, Abreu said, “with understanding the humanity of the event, and understanding that Sirhan is a cultural marker, a historical figure. How do you work with that and not let it weigh on you as a global villain, and how do you keep your mind in a positive place?”

The effort to assist Sirhan began early this year and involved endless conversations with the 77-year-old Palestinian immigrant. The mock parole hearings, Abreu said, were held in the day room, in Sirhan’s unit, in the yard, in the chapel, and while walking with him on the track. In the week leading up to the hearing, the murder boards, often involving four inmates, went for more than eight hours a day, grilling Sirhan with every possible question he might hear.

Most prisoners have a significant history of trauma prior to confinement, and all experience it while serving time. The Redemption Row inmates dig into that trauma. “We’re looking to find the nexus of how your trauma started. That’s what we did with him. We went back to Palestine and talked about the things he saw,” Baptiste said, noting that Sirhan was the first parole candidate the group worked with.

“We tried to really provoke him, get at things he doesn’t want to talk about, identify those things and dive into them as deep as we can,” Baptiste continued. “And then we’ll do it in a rapid-fire fashion: Before one of the questions is answered, we’ll ask him another one, try to get him stressed out, try to get him confused a little bit.”

Prosecutors at his murder trial alleged, citing notes Sirhan had left, that he was motivated to assassinate Kennedy by the senator’s support for Israel. The parole board dove immediately into the politics of the Israel-Palestine conflict at Sirhan’s hearing. Abreu, who testified at the hearing, witnessed the full event, though a transcript is not yet available.

Sirhan broke down emotionally under the questioning, Abreu said, but was able to recover his poise, which she credited to his work with the inmates. At one point, a parole board member asked him why he spoke up about the suffering of Palestinian children and not Israeli children, a remark that would have triggered an angry reaction in the past. Instead, Abreu said, he paused, collected himself, and told the board, “With all due respect, I never saw any Israeli children.”

A board member noted that if he were to be released, he’d be a hero among Palestinians. Sirhan responded that he does not remotely consider what he did heroic.

Sirhan has long had trouble discussing the Israel-Palestine situation. He was born in Jerusalem in 1944, four years before what Palestinians refer to as the Nakba, the successful declaration of the state of Israel. His home was taken over by proto-Israeli insurgents. “There was death pretty much surrounding him in war-torn Palestine,” Baptiste said.

One afternoon as a child, he saw an elder in the neighborhood leaned against a wall, and thought he was sleeping. When he got closer, he told the group, he realized the man had been shot and killed. One day, drawing water from a well, he pulled up a human arm. He watched as his brother, Munir, was run over and killed by a Jordanian army truck “swerving to escape Israeli gun fire,” according to documents in his psychological evaluation. Sirhan was so distraught at the death of his brother, the evaluation reports, his mother named her next son Munir. Munir now lives in Pasadena, where Sirhan hopes to return. Photo: Philip Cheung for The Washington Post via Getty Images

Arturo Guzman in particular helped Sirhan open up about the violence in the Middle East. At the age of 17, Guzman was a helicopter gunner in Vietnam; he told Sirhan about the carnage, watching bodies blown apart in a war where he had no animosity against the enemy. Having a top-ranking member of the Mexican mafia talk about trauma and its consequences, said Baptiste, helped Sirhan cut through the “toxic masculinity” that was standing in the way of confronting his own.

Aside from Kennedy, five others were wounded at the Ambassador Hotel in the shooting, and Sirhan addressed each individually at the hearing. One of them, Kennedy aide Paul Schrade, now in his 90s, spoke in support of Sirhan, arguing that the man had reformed and served his time.

Kennedy’s widow, Ethel Kennedy, opposes parole and some of Kennedy’s children have urged Gov. Gavin Newsom to reject the parole recommendation, but Doug Kennedy, who attended the hearing, and Robert F. Kennedy Jr. have advocated on behalf of his release. Robert F. Kennedy Jr. sent a note to the board that was read aloud during the hearing, in which he pledged his support and said that he would be proud to be Sirhan’s friend if he’s released. (Robert F. Kennedy Jr. believes a second shooter was responsible for the shots that killed his father, and sloppy work by the Los Angeles Police Department has left that theory open, but it’s not widely held by those who’ve looked closely at the case.)

After the board recommended parole, Sirhan found members of the Redemption Row crew waiting for him. “It just so happened we were the only people on the yard,” Baptiste said. “We started cheering and yelling and hugging and lifting him up on our shoulders. It was pretty much the most amazing wave of emotion I’ve felt since I’ve been in prison.”

Newsom can reject the board’s recommendation of parole, but if he approves it, Sirhan still has one more hurdle to overcome: his immigration status. Sirhan was a green card holder but faces potential deportation to Jordan — where he lived as a refugee — if he is freed. Baptiste said Sirhan desperately hopes to stay in Pasadena, where he dreams of sitting on the beach and sharing long conversations with Munir.