Two Chinese American scientists at Baylor College of Medicine in Houston were removed from their jobs on the same day last month, raising concerns among colleagues that they may have been targeted in fallout from the Justice Department’s controversial China Initiative.

The two scientists, who are both naturalized U.S. citizens working in the biomedical sciences, were informed of their termination at the same time on the morning of August 30, according to three sources and a document reviewed by The Intercept. One scientist declined to comment; the other did not respond to a request for comment.

The China Initiative was launched in 2018 under then-Attorney General Jeff Sessions to combat industrial espionage, technology transfer, and hacking from China but has faltered, prompting criticism from civil rights advocates and Asian American activists. Despite continued Justice Department hype, charges in several recent instances have been dropped. Earlier this month, a federal judge acquitted former University of Tennessee-Knoxville scientist Anming Hu following a mistrial. A juror who sat through the trial had told The Intercept that “it was the most ridiculous case.”

The China Initiative has been accompanied by an effort by the U.S. National Institutes of Health, which administers federal grant money for biomedical research, to investigate hundreds of researchers who are suspected of failing to disclose foreign ties. In a June 2020 presentation, Michael Lauer, NIH’s deputy director for extramural research, said that close to a third of its investigations up until that date had involved the FBI, while 93 percent had involved undisclosed ties to Chinese institutions.

Baylor cited potential issues with federal grant compliance, among other concerns, as cause for dismissing the scientists. But two Baylor faculty members told The Intercept that they fear the school is penalizing people because of their spouses’ work. Both of the terminated scientists are married to scientists who have held positions in China. The faculty members asked to remain anonymous because they were not authorized to talk to the press.

Houston was the site of a sweeping 17-month FBI probe in 2018 that sent shockwaves through the scientific community. The inquiry involved FBI agents working in tandem with administrators at NIH and MD Anderson Cancer Center, whose campus abuts Baylor’s. For months, agents hounded ethnic Chinese scientists, gaining access to 23 MD Anderson employees’ network accounts, and in one case installing a surveillance camera near a researcher’s office. In 2019, MD Anderson revealed that it had ousted three scientists as a result of the probe, but none were ultimately charged with a relevant crime. One scientist was charged in county court with possession of child pornography and smeared in the local press, only to see the charge against him dropped.

A spokesperson for Baylor declined to comment, saying that the college does not discuss personnel matters. A spokesperson for NIH said that the agency “does not discuss internal oversight reviews of [grant] recipient institutions or their affiliated researchers, whether or not such reviews took place or are underway.” The FBI did not respond to a question about whether it had investigated the two scientists.

The China Initiative has attracted widespread scrutiny. A recent Justice Department fact sheet says that the effort is aimed at identifying “non-traditional [information] collectors (e.g., researchers in labs, universities and the defense industrial base) that are being co-opted into transferring technology contrary to U.S. interests.” Civil rights advocates worry that the “non-traditional collector” label is being broadly interpreted to mean anyone of Chinese descent.

“Either it’s true what the FBI and other intelligence agencies say about this enormous threat of non-traditional collectors and they’re just really bad at finding them, or the rhetoric is overwrought, and we need to be much more discerning,” said Michael German, a fellow at the Brennan Center for Justice and a former FBI agent. In an interview with The Intercept, he called for “ensuring that resources devoted to economic espionage are actually focused on people directed by the Chinese government.”

Over the past few decades, many U.S. institutions have set up joint programs and projects in China, often putting forth ethnic Chinese researchers to build ties. Those scientists now say that their institutions have sent mixed messages about international collaboration. MD Anderson, for example, received a 2015 award from China’s State Council in a ceremony attended by Chinese leader Xi Jinping. Two years later, an MD Anderson vice president flew to Beijing to meet with the director of the agency that administers China’s Thousand Talents program, a frequent target of the FBI.

Baylor also had several partnerships in China and, according to faculty, had encouraged researchers to work in the country. One such effort was a formal partnership at Sun Yat-sen University in Guangzhou covering joint research projects and scholarly exchanges. On its website, Baylor touts the work as a powerful example of cross-border collaboration. And in 2014, the Chinese consulate in Houston published photos of a signing ceremony involving a Baylor center and a biomedical company affiliated with Peking University. (In July 2020, the Trump administration abruptly closed the Houston consulate, with Secretary of State Mike Pompeo alleging that it was “a hub of spying and intellectual property theft.”)

Baylor did not respond to questions about its China work. It is unclear whether the partnerships are still active. 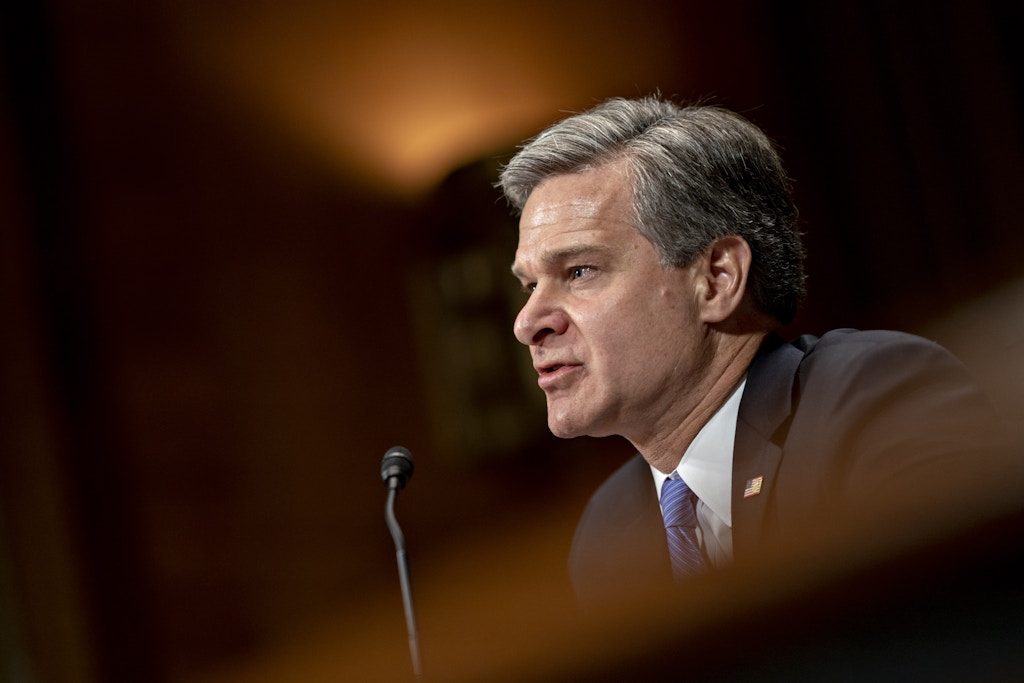 Christopher Wray, director of the Federal Bureau of Investigation (FBI), speaks during a Senate Judiciary Committee hearing in Washington, D.C. on July 23, 2019. Wray said during the hearing that China is the biggest counterintelligence threat to the U.S.

Although the China Initiative was launched under the Trump administration, the profiling of ethnic Chinese scientists long predates that. The FBI’s Counterintelligence Division created a dedicated Economic Espionage Unit in 2010, under the Obama administration. The Justice Department says that over 80 percent of its economic espionage prosecutions are China-related, and FBI Director Christopher Wray has repeatedly claimed that the bureau is opening a new case involving China every 10 hours. But civil rights advocates and legal scholars say that the Justice Department has few successful prosecutions to show for the effort. “I’m tired of being told, ‘There are big problems out there, and you just don’t have the security clearance,’” said Margaret Lewis, a law professor at Seton Hall University whose research focuses on law in China and Taiwan. “That’s not good enough for me. I can’t be told, ‘Just trust us, we’re the government.’”

With both the China Initiative probes and earlier cases, Justice Department officials have argued that U.S. scientific research and corporate knowledge are matters of national security importance, regardless of the topic. Prosecutors have brought cases centering on GlaxoSmithKline pharmaceuticals, genetically modified Monsanto corn seed, and a DuPont whitener used in paint and Oreo cookies. At times, agents have resorted to extreme tactics. For a 2012 case involving glass block insulation, the FBI crafted both an elaborate sting operation and a stinker of a film publicizing its work.

Since 2018, the bureau has also chased down instances of unreported China ties flagged by NIH — a persistent problem in academia, but one that critics say doesn’t necessarily equate to stealing technology.

Baylor administrators had previously allowed scientists flagged by NIH the chance to correct potential grant reporting violations, rather than subjecting them to criminal investigation. That approach had earned the institution praise among Asian American activists nationally, as well as from local faculty. But the administrator who oversaw that effort recently left Baylor.

“Baylor is not the same any more,” said Steven Pei, an engineering professor at the University of Houston who is a co-organizer of the APA Justice Task Force, which advocates for Asian American scientists who have been unfairly accused of crimes. “The faculty is now as confused, frustrated, and scared as they were two to three years ago.”