Kyle Rittenhouse’s Acquittal Sets a Dangerous Precedent. But That’s Not What Was on Trial.

Jurors are asked to uphold the law as it stands. We don’t ask jurors to make the law. That’s on us. Judge Bruce Schroeder, right, listens as the verdicts are read by judicial assistant Tami Mielcarek in Kyle Rittenhouse’s trial at the Kenosha County Courthouse on Nov. 19, 2021, in Kenosha, Wis.

Kyle Rittenhouse is free, the beneficiary of a verdict that politically imprisons the rest of us.

Jurors rejected the legal argument presented by prosecutors, returning a verdict of not guilty on all counts, including two counts of homicide, for the August 2020 shootings in Kenosha, Wisconsin, during a Black Lives Matter protest. The prosecution described Rittenhouse as remorseless and committed to acts of violence, and said that his armed presence was provocative and that he didn’t exhaust all legal means to avoid killing someone.

Yet thanks to this jury verdict, more people will undoubtedly try to.

We can’t say we didn’t see it coming. Judge Bruce Schroeder’s decision to allow the men lying dead at Rittenhouse’s feet to be called “looters” or “rioters” but not “victims” set a tone that continued, ruling after ruling. Yes: One of the people Rittenhouse shot — Gaige Grosskreutz – was armed. I find that insufficient justification for the death of two other men.

No, the legal argument failed. And that was the only argument jurors were ever going to hear in court. But it’s not the only question that you and I as American citizens have to wrestle with.

Here’s the argument that the jury couldn’t hear: In exonerating Rittenhouse, the jury has given license to every violent extremist in America to arm themselves and look for trouble amid their political opponents, wherever they might be.

In exonerating Rittenhouse, the jury has given license to every violent extremist in America to arm themselves and look for trouble.

Consider the next time people rally for, say, abortion rights. Or perhaps immigration controls. Or the next Stop the Steal rally. A free Kyle Rittenhouse means we will now be met with two camps of armed protesters, possibly from around the country, each squad waiting for an opponent to twitch suspiciously in a way that will allow excuses to fly along with the bullets.

A body count begins today with this verdict. Every time a Proud Boy or a neo-Nazi opens fire at a Black Lives Matter rally or its equivalent in the future, they will have Rittenhouse’s defense on their lips.

The thing is, you can’t convict a man for the things you fear others will do in his name. I know that. There is no way to argue that in court without creating a mistrial. It is not a legal argument; it is a political argument.

Schroeder also barred prosecutors from linking Rittenhouse to the Proud Boys, though Rittenhouse had become friendly with the violent and bigoted group in the days following the street killings. It was one of many pronouncements meant to sever the legal question of Rittenhouse’s guilt from the political ramifications of an acquittal.

But it is from conjecture like this that we make decisions about what our society and our laws should look like in the future. Court is meant to do something very specific: to ask 12 jurors to uphold the law as it stands. We don’t ask jurors to make the law. That’s on us. We have a responsibility to see what decisions are made and then to change the law to make sure the decisions we hate are never made again. 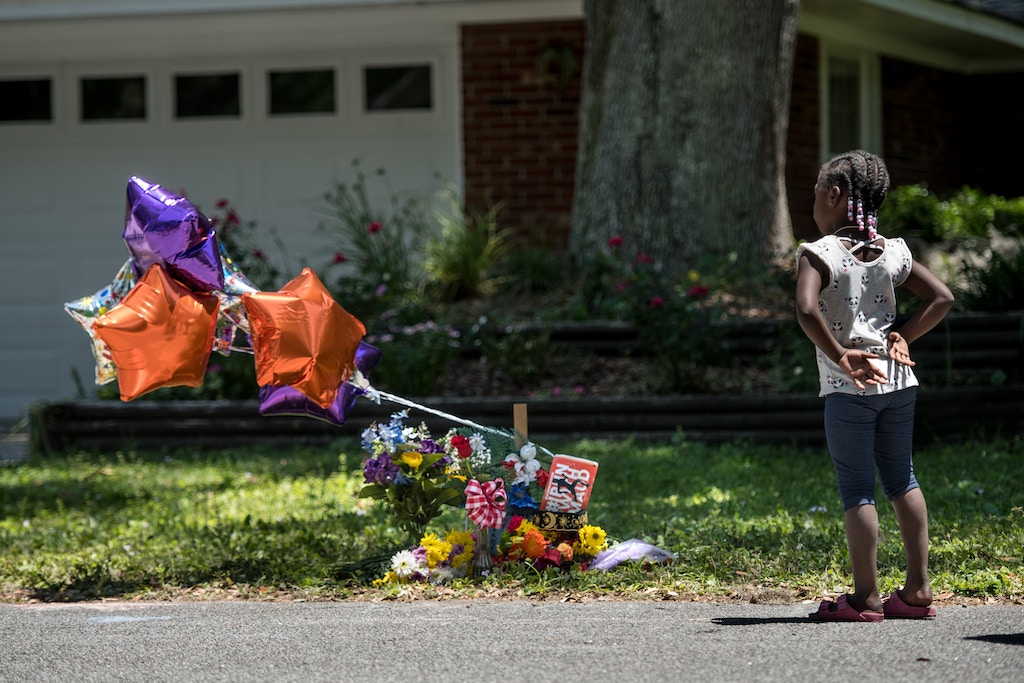 A young girl looks at a memorial for Ahmaud Arbery, near where he was shot and killed, on May 8, 2020, in Brunswick, Ga.

When the video surfaced of Travis McMichael, his father Greg McMichael, and their neighbor William “Roddie” Bryan shooting Ahmaud Arbery dead while jogging in Brunswick, Georgia, last year, public outrage was immediate and condemnation widespread. And while, in the Rittenhouse case, powerful forces acted to defend Rittenhouse against consequences, it was clear even to — especially to — Georgia Republicans that the legal defense of self-defense for the McMichaels and Bryan in the wake of a citizen’s arrest could not be given the breath of legitimacy. Georgia is a purple state with a very different set of racial politics than Wisconsin.

Once public opinion became clear, the state moved to contain the political damage that the killing created and diminish the chance that Arbery’s killers would be acquitted. Amid the presidential race in Georgia, which had become the mother of all political contests, Georgia’s Republican-controlled legislature still managed to pass hate crimes legislation after decades of obstruction, so great was the revulsion and the fear that Arbery’s bloody shirt would be the veil through which the world would see the state. In Georgia’s next legislative session, the state repealed statutes allowing for citizen’s arrest.

The Glynn County court had to sift through 1,000 potential jurors to find 12 who might be considered fair, because hostility to the defendants had become that widespread.

Defense attorneys working for Arbery’s killers were left to grandstand and shock in ways they apparently hoped could draw a mistrial. Kevin Gough, the defense attorney for Bryan in the case, argued last week in court to bar “any more Black pastors” from attending the trial after seeing Al Sharpton in the gallery with Arbery’s mother, suggesting that high-profile Black clergy could influence the jury. Gough later apologized for his comment but still reiterated this argument in a motion Tuesday. The judge rejected it.

A conclave of Black pastors answered Gough’s challenge Thursday, flooding the courthouse grounds in a sea of well-tailored three-piece suits. Pastor Jamal Bryant of New Birth Missionary Baptist Church near Atlanta stood on the courthouse steps and called Brunswick as “our generation’s Selma” and a place of renewal for the fight for civil rights.

Clergy carefully crafted their message Thursday around diminishing the risk of giving Gough what he wanted: a mistrial. “We as pastors — Black, white and any other faiths as well — wanted to come together in unison to pray,” said Pastor Lee May, leader of Transforming Faith Church in Decatur, Ga. “This is a prayer vigil by the pastors. We’re not here to protest. We’re not here for any civil disobedience. We believe that prayer will make a difference.”

May warned everyone he had spoken with to be on their best behavior. “We don’t want to cause any kind of trouble to change the trajectory of this trial.”

Travis McMichael testified Wednesday, describing his actions leading up to Arbery’s death for the jury. Doing so opened him up to withering cross examination from prosecutors, who highlighted how Arbery had been unarmed and running away from him and from the other defendants before they killed him. Closing arguments will begin Monday.

“I think with the evidence that I believe is so strongly against their clients as it relates to the murder of Ahmaud Arbery, they’re doing everything they can to try to get a mistrial,” said Mawuli Davis, a prominent civil rights attorney and activist in Georgia closely following the case. “It’s a strategy that defense attorneys employ. You push as hard as you can and hope for an error.”

It’s a Hail Mary play from the defense. “Everything that happens out here is a matter of our First Amendment right to protest and to be heard,” Davis continued. “I think when you blur those lines and you try to prevent people from being able to voice their displeasure with the way the system has treated this case thus far, then you’re in a real problematic space. You can’t prevent people from speaking out, even though people have a right to a fair trial.”

I now have to wonder if that’s still true. Kyle Rittenhouse’s gun can veto the bullhorn. We have to act: It should be clearly illegal under federal law to menace protestors while armed. The right to keep and bear arms must not obliterate the right to peaceably assemble. We have to consider this an act of political intimidation on its face moving forward, if the ballot is meant to prevail over the bullet.