Journal Retracts Paper Based on DNA of Vulnerable Chinese Minorities

The retraction by Human Genetics follows a scientist’s efforts to expose research that is complicit in human rights violations. A highly regarded scientific journal has retracted a paper based on DNA samples from nearly 38,000 men in China, including Tibetans and Uyghurs who almost certainly did not give proper consent.

The rare retraction by the journal, Human Genetics, follows a two-year crusade by a Belgian scientist to push publishers to investigate research that he and others say is complicit in human rights violations.

The paper’s authors used DNA samples from across China to assess genetic variation among and within ethnic groups. The journal’s editors retracted the paper because of doubts about the informed consent process. According to a retraction notice published December 11, three authors, including the two lead authors, agreed to withdraw the paper. Human Genetics is published by Springer Nature, which retracted two other papers for similar reasons in August and September.

The scientist who spearheaded the retraction campaign, Yves Moreau, said he was thankful that Springer Nature had investigated but that there was more work to be done, noting that the paper’s findings had been used in over two dozen other papers. “This is not only a matter of informed consent, but also a matter of retracting and not publishing research clearly linked to serious harm,” said Moreau, who is a bioinformatician at the University of Leuven in Belgium. “It raises the question of what will happen to those almost 40,000 DNA profiles.” The anonymized profiles remain in an online database in Germany that can be freely queried by anyone.

At least nine of the paper’s 30 co-authors are affiliated with Chinese police departments or police academies, and several others are affiliated with forensic science departments at Chinese universities. Researchers are often given co-author slots in exchange for collecting samples and data, said Moreau, making it likely that at least some of the Chinese samples were collected by police. China’s Ministry of Public Security, which oversees police across China, has been building out a national DNA database, over the objections of human rights activists.

One of the lead authors on the retracted paper, Lutz Roewer, oversees the German database, which is housed at the Charité research hospital in Berlin. Called the Y-Chromosome Haplotype Reference Database, or YHRD, it is often used by police around the world who are seeking more information about specific DNA samples. It has recently come under scrutiny for including DNA from the persecuted Roma ethnic group as well as Uyghur and Chinese DNA that ethicists presume was collected without informed consent.

Roewer did not immediately respond to a request for comment. 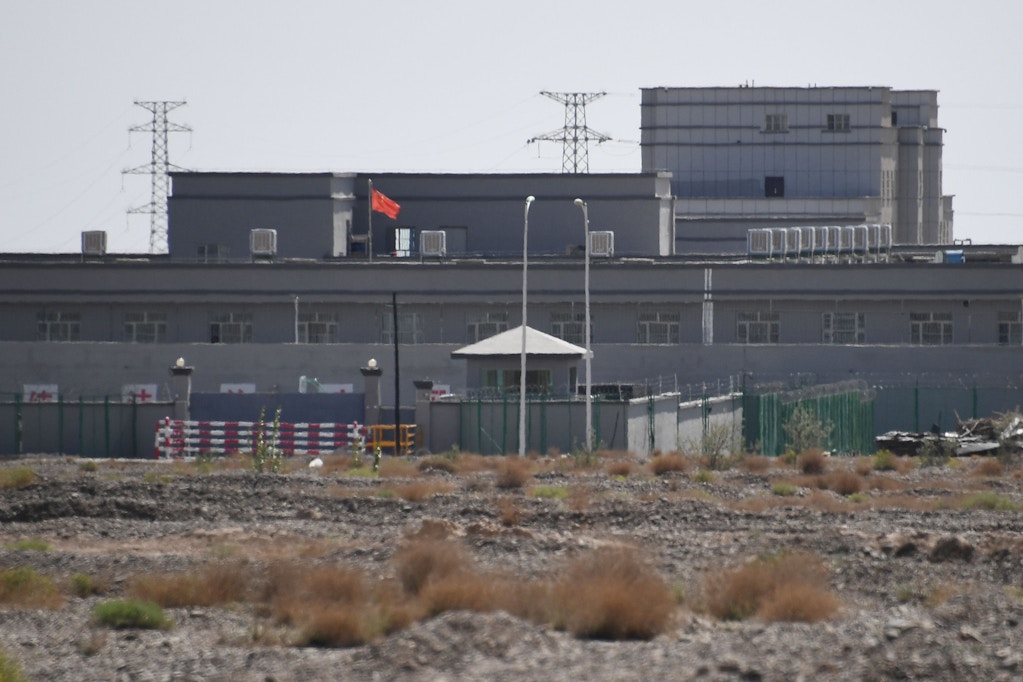 A facility believed to be a reeducation camp where mostly Muslim ethnic minorities are detained is seen in Artux, north of Kashgar in China’s western Xinjiang region, on June 2, 2019.

Over the past few years, the Chinese government has interned Uyghurs and members of other predominantly Muslim ethnic groups in cruel camps and forced them into labor. Authorities have collected DNA from nearly all residents of Xinjiang and Tibet as part of a broader surveillance program. Elsewhere in the country, they have collected samples from “focus groups,” including people with mental illnesses. They have also targeted DNA from men across the country using an efficient and powerful technique focused on the unique sequences that occur on the Y, or male, chromosome. By gathering so-called Y-STR data from just a portion of men, police can build out family trees for a much larger swath of the male population.

An explosion in accessible DNA technologies has also sparked police misuse in the United States. In China, said Emile Dirks, a doctoral candidate at the University of Toronto who studies Y-STR data collection, “you have a nationwide, multiyear campaign to target individuals for genealogical or genomic collection, none of whom are targets in an investigation, nor are they known to be or suspected of being related to someone who is a target of a criminal investigation.”

YHRD, the German database, is the largest collection of Y-STR samples in the world, containing 300,000 profiles. The profiles do not have names attached, but police often use them to zero in on a likely geographic origin for a suspect, then use that marker to make assumptions about the suspect’s ethnicity.

“If our community is perceived to be condoning or even tolerating human rights abuses, public trust in genetics will rapidly crumble.”

Moreau first raised concerns about the paper with Springer Nature editors in June 2020. This past July, he wrote to the journal’s editorial board to ask for help, appealing to the Hippocratic oath that many took when they became doctors. “Public trust in human genetics depends on our community’s ability to transparently abide by its moral duties,” he wrote. “If our community is perceived to be condoning or even tolerating human rights abuses, public trust in genetics will rapidly crumble.”

In a later email to the editorial board, he worried that his inquiries were “being stonewalled because of strategic and business considerations by publishers, who are afraid of poking a mighty bear,” referring to the financial interests of journals operating in China.

Springer Nature did not immediately respond to The Intercept’s requests for comment.

Moreau’s email to the editorial board sparked a heated discussion. One scientist responded to his comment about business interests, observing that science was “‘slipping’ from the hands of actual practicing scientists — and not just in human and medical genetics.”

“The work included DNA probes of sources that did not respect ethical obligations, thereby violating contemporary ethical norms and regulations,” Gudrun Rappold, a geneticist at the University of Heidelberg and a member of the editorial board, wrote to The Intercept. She said that she had previously used Y chromosome data in her own work but that she saw the retraction as “a warning sign for the future.”

In August, Moreau’s emails to the editorial board of another journal that had published fraught research, Molecular Genetics & Genomic Medicine, prompted eight scientists to resign in protest.

“China is the best and the clearest example that one can think of because we all agree that human rights violations in China are so severe,” said Veronika Lipphardt, a science historian at the University of Freiburg in Germany who, along with Rappold, recently authored a comment article in Nature on abuses involving Roma DNA. “But we should not forget to look elsewhere. A lot of data from marginalized populations around the world, in nondemocratic regimes as well as in democratic countries, has been collected in similar ways by police forces.”

Correction: December 14, 2021
This article has been updated to clarify that the database containing the anonymized DNA profiles on which the retracted Human Genetics paper was based does not require registration and can be queried by anyone with access to the internet.