According to the 2021 results, 60 percent of our staff identify as white and 34 percent identify as people of color. Each year, The Intercept conducts a survey of its staff to find out how we are faring in our effort to increase the demographic diversity of our newsroom. Following the publication of our first annual staff demographic survey in 2020, we are now making available the results of our second annual demographic assessment.

This year’s survey, which consisted of 17 questions sent to all 56 full-time U.S. employees and fellows, was conducted in March 2021. The survey was both voluntary and anonymous; this year, it was completed by 90 percent of those who received it.

The Intercept’s long-term goal is to increase the percentage of people of color in the newsroom to 50 percent, and we also want to increase the number of staff members who come from socioeconomic backgrounds underrepresented in journalism. According to the 2021 results, 60 percent of our staff identify as white and 34 percent identify as people of color, with the remainder declining to self-identify.

One step we have taken toward increasing the diversity of our staff is diversifying the pool of applicants we interview for staff positions. After achieving gender balance in 2020, The Intercept changed the implementation of our “double Rooney Rule” — which requires at least two candidates from currently underrepresented groups in journalism to be interviewed for all open positions — to focus on people of color, people with disabilities, and others currently underrepresented in our newsroom.

Moreover, The Intercept took steps to retool our fellowship program to better resonate with and attract diverse candidates. In the call for applications, we strongly encourage early-career journalists of color and those of underrepresented backgrounds in investigative journalism to apply for our fellowships. We acknowledge the critical lack of diversity at investigative news outlets and the need to support aspiring journalists who may face structural and economic barriers by providing opportunities to develop their skills and advance their careers. The Intercept has since begun including similar language in postings for staff positions as well.

The responses to our annual anonymous survey are being presented as percentages in three categories: managers, non-managers, and total staff. This is a switch from last year’s approach, when we published survey answers organized between union and non-union members. We have made some small changes to the questions and the presentation of the data. For example, we are including all racial demographics in our final report, including ones lacking any representation among our staff. We rounded to the first decimal point, so some percentages do not add up to 100.

All questions offered the option “prefer not to say.” Some questions also allowed responders to fill in individual answers; these answers will not be made public in order to protect the anonymity of responders. At the time the survey was completed, no one at The Intercept identified as transgender, and 8% of the newsroom chose to not answer that question. 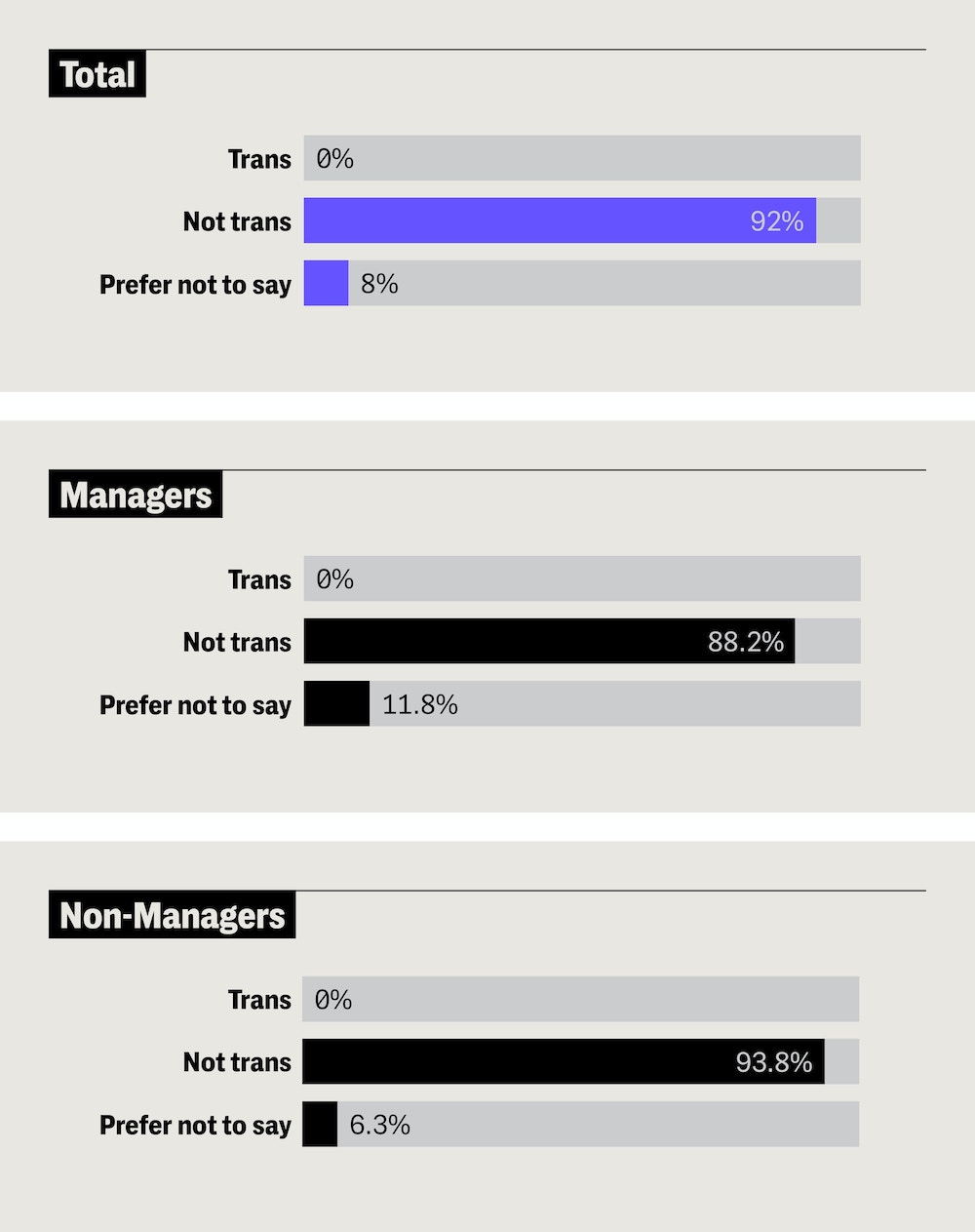 The chart below represents the racial and ethnic breakdown of all Intercept staffers.

No one at The Intercept identifies as Native American or as Native Hawaiian or Pacific Islander.

The chart below features data on 10% of the staff who answered the race and ethnicity question with “two or more.” Those who did not choose that specific answer were asked to answer this question with “not applicable.”

A total of 18% of The Intercept staff identities as LGBPQA (Lesbian, Gay, Bisexual, Pansexual, Queer, or Asexual). 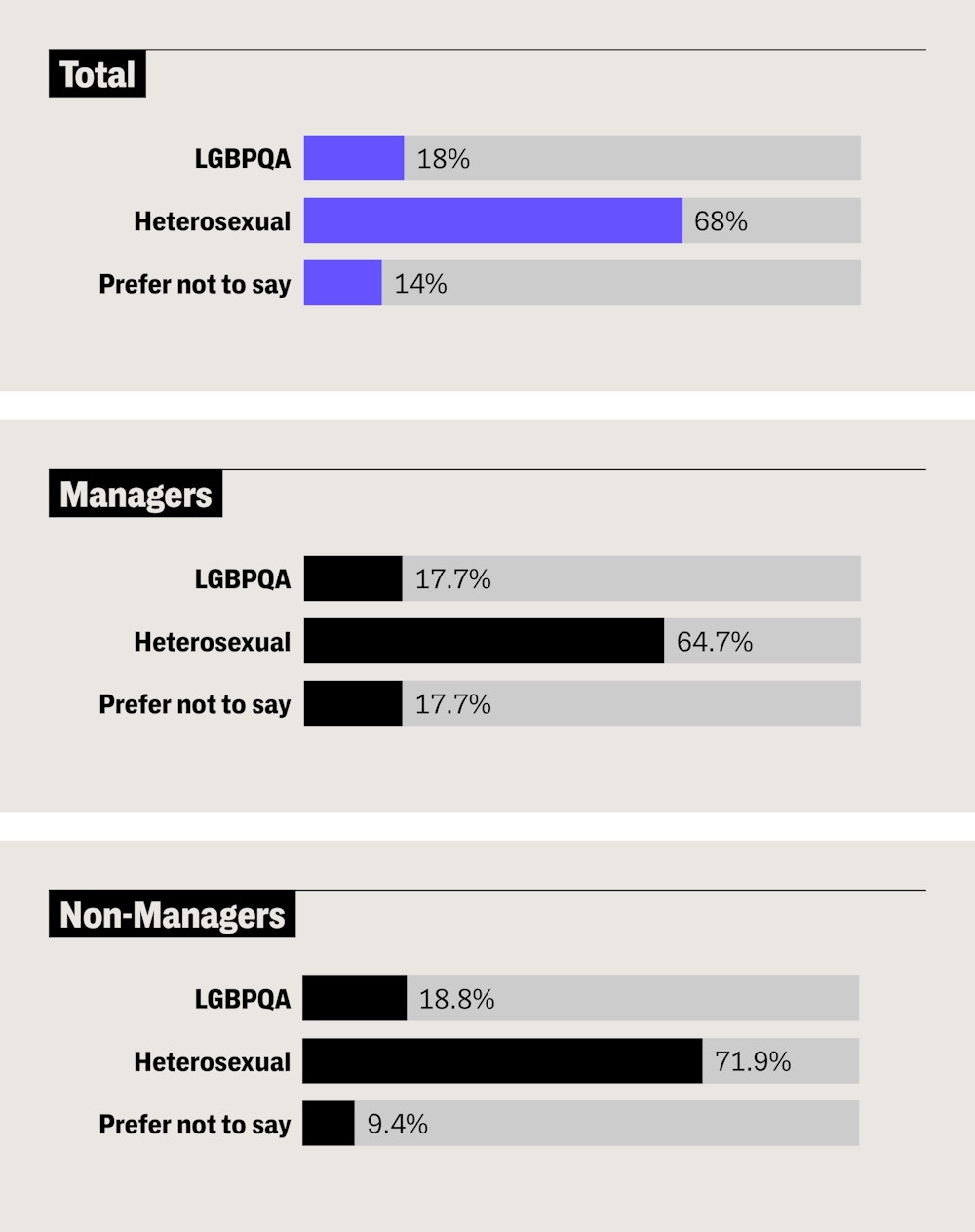 A majority of The Intercept staff attended public high schools (66%), and about half obtained their bachelor’s degrees at private institutions (56%). A total of 17.7% of Intercept managers are first-generation college students; a total of 9.4% of non-managers fall in that category. A majority (52%) of employees do not have an advanced degree, while 32% have a master’s degree from a private university. 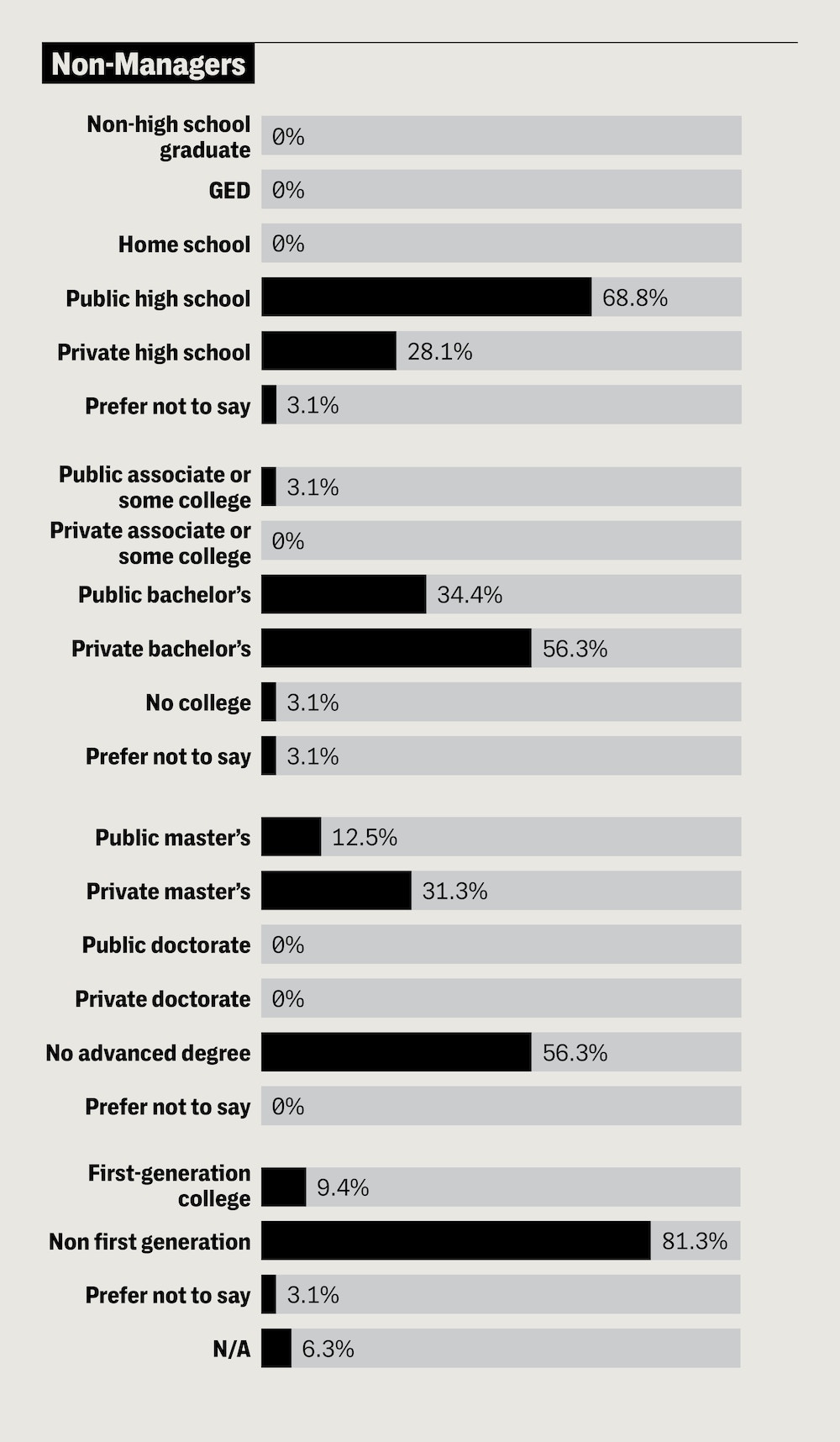 A total of 18% of our staff are first-generation immigrants, and 24% have parents who are immigrants. 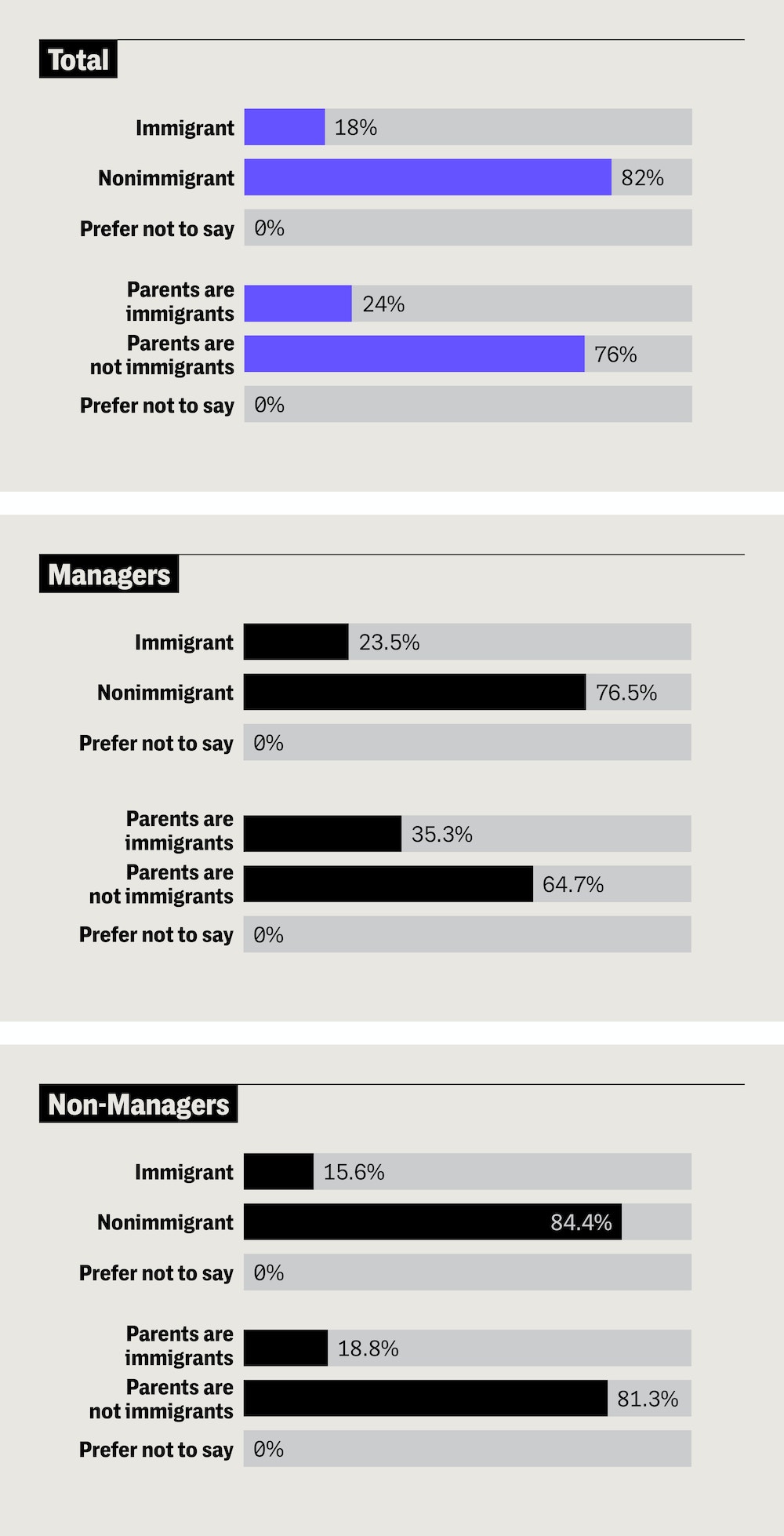 Among all employees, 8% identify as having a disability. 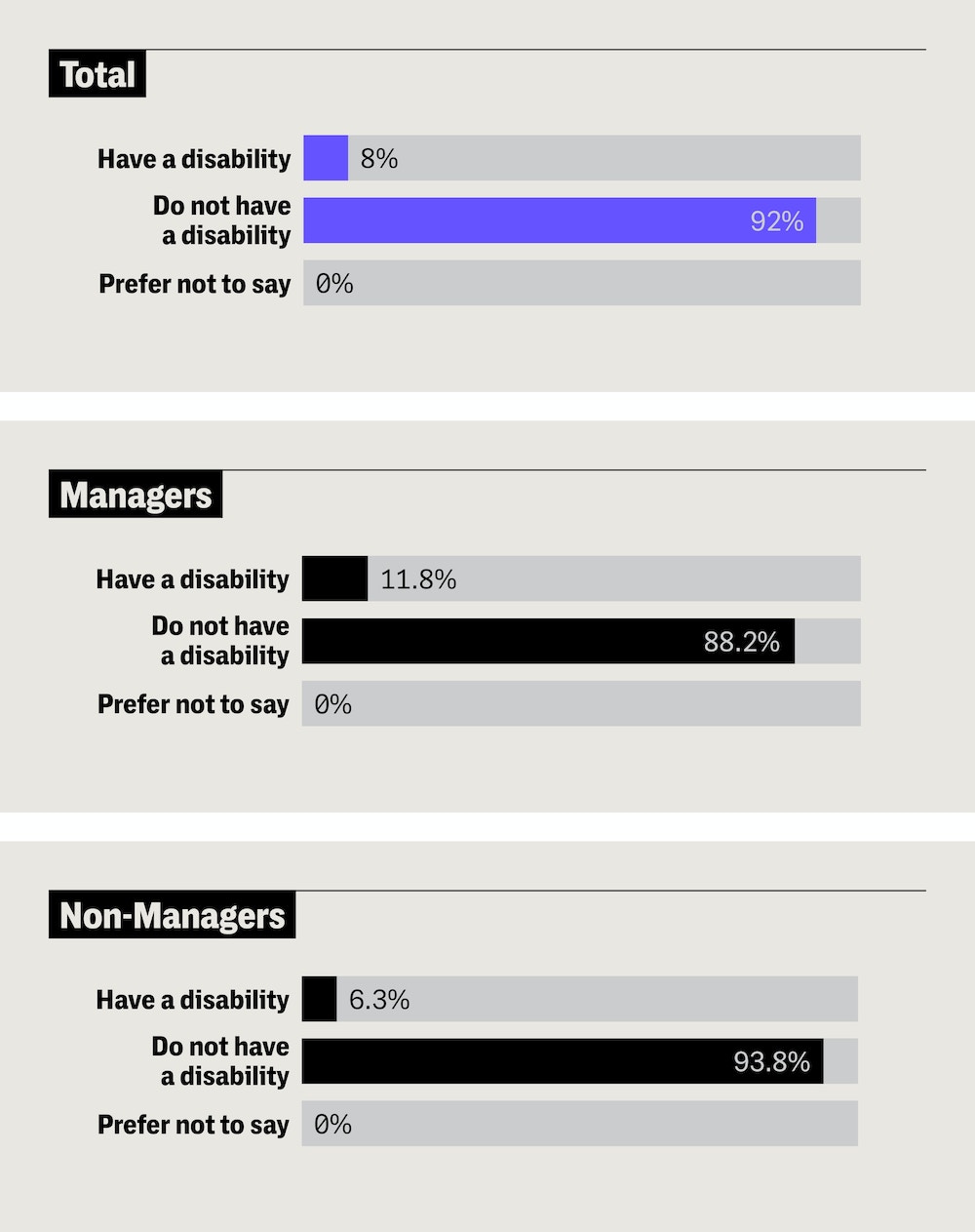 A total of 36% Intercept employees have worked at First Look Media, The Intercept’s parent company, between three and five years, and 30% of our staff have been with the company for more than five years. 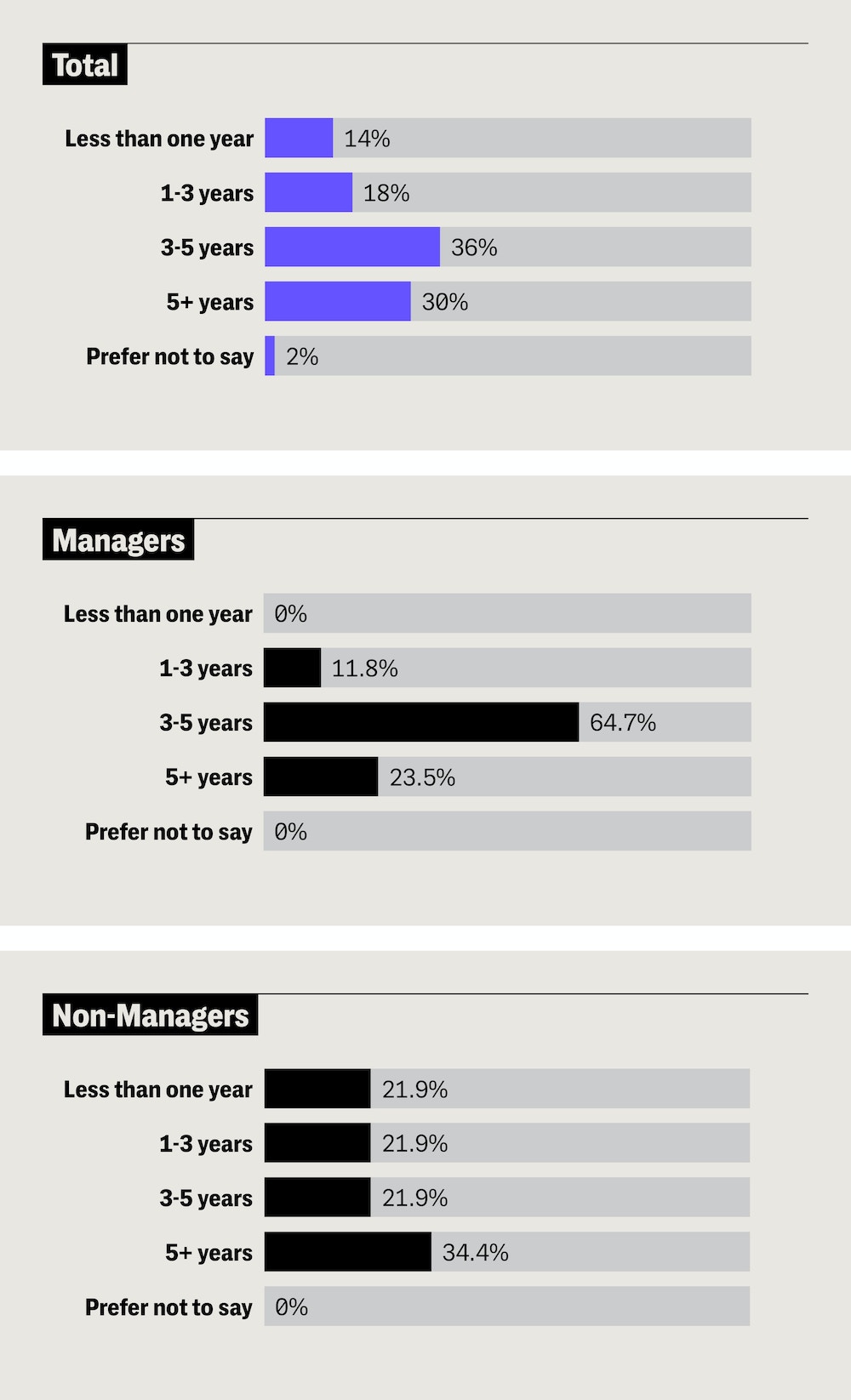 A little less than a third of Intercept employees (30%) have worked in journalism between one and five years, while 22% of our newsroom has between five and 10 years of experience in newsrooms. 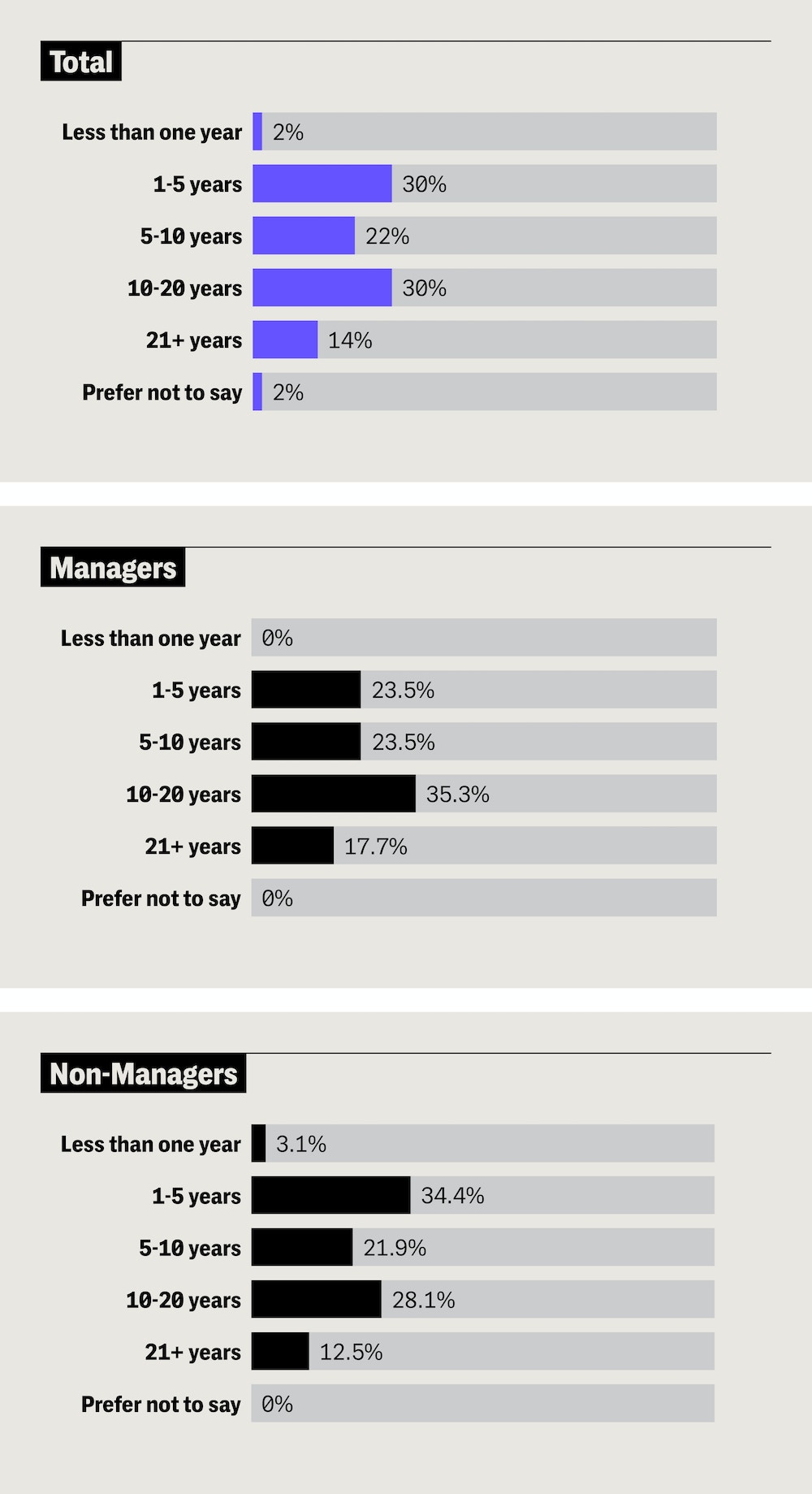