Christopher Warnagiris wrote about the relatively obscure Stoic philosopher Epictetus, who has become a surprise rock star of the alt-right. The U.S. Capitol seen behind fences post-insurrection in Washington, D.C., on July 9, 2021.

Christopher John Warnagiris, a major in the U.S. Marine Corps, is the highest-ranking active-duty military officer to have been arrested in connection with the January 6, 2021, insurrection at the U.S. Capitol.

Warnagiris, stationed at the Marine base in Quantico, Virginia, at the time, played a significant role in the attack. Early on, he struggled against Capitol Police officers at the East Rotunda doors, and a video shows him using his body to keep the doors open while helping other rioters get inside. After he was identified from photos of the insurrection in March, Warnagiris was arrested by the FBI in May and indicted on charges listed by the Department of Justice as assaulting, resisting, or impeding certain officers or employees; obstruction of law enforcement during civil disorder; obstruction of justice/Congress; knowingly entering or remaining in any restricted building or grounds without lawful authority; and violent entry and disorderly conduct on Capitol grounds.

On Twitter, those who have closely studied videos and photos of the insurrection have dubbed Warnagiris “YellowZipSkulker,” thanks to the green jacket with a yellow zipper that he wore during the riot, and because of his apparently aimless movements after he left the battle at the East Rotunda doors and began to wander around inside the Capitol, as if just realizing what he had done. 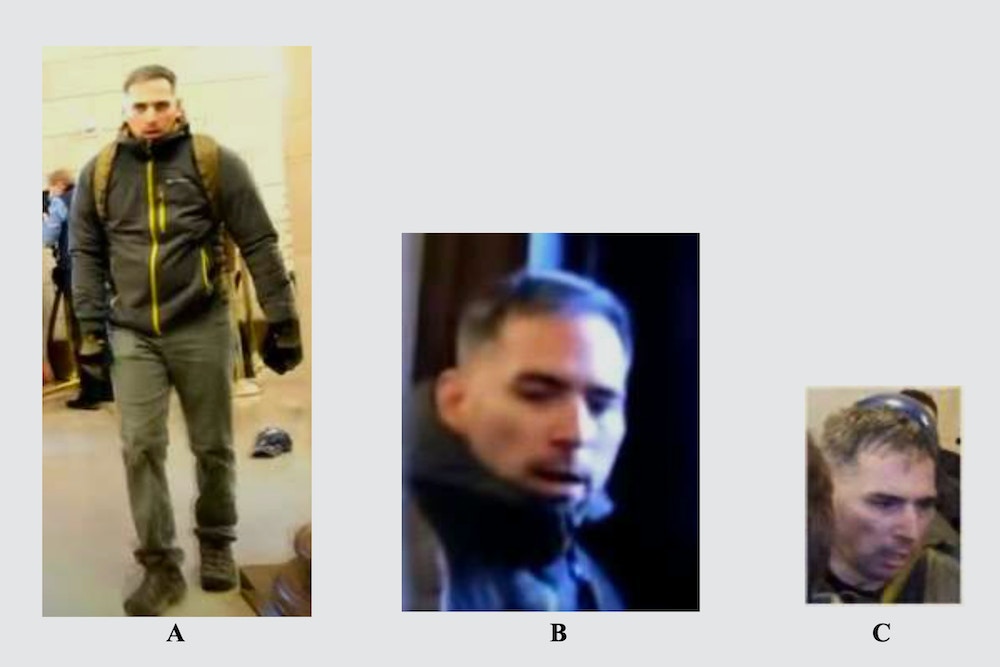 Screenshots from multiple YouTube videos identify Christopher John Warnagiris as the “YellowZipSkulker” compiled by the DOJ.

What would motivate a serving Marine officer to join a traitorous attack on the American democratic system?

Only Warnagiris, who has pleaded not guilty to all charges, knows for certain. His lawyer, Marina Medvin, did not respond to a request for comment, and several of his relatives also declined to talk about him.

In 2002, Christopher John Warnagiris graduated from St. John’s College, a small private school with campuses in Annapolis, Maryland, and Santa Fe, New Mexico, a spokesperson for the college confirmed.

St. John’s is known for its “Great Books” curriculum, which highlights canonical works of Western civilization. Its undergraduate studies are built around seminars in which students discuss a reading list of classical works, starting their first year with Plato, Aristotle, and Sophocles.

St. John’s College has a politically diverse faculty and student body, yet the school’s emphasis on a tradition-bound approach to education has, in recent years, also helped transform it into something of a hotbed for a small coterie of conservative academics. Pano Kanelos, who was president of St. John’s Annapolis campus, just left to become president of the University of Austin, which was founded last year with the express purpose of offering an alternative to what its founders say are the liberal excesses of most American universities. One of the commencement speakers at Warnagiris’s 2002 graduation from St. John’s was Victor Davis Hanson, a classics scholar at the Hoover Institution at Stanford University. Hanson is now perhaps best known as a conservative pundit who rails against what he sees as the corrosive effects of the progressive agenda, particularly on college campuses.

The capstone of undergraduate studies at St. John’s is the senior essay, an intense yearlong writing project that the college describes as “the extended pursuit of a difficult question in dialogue with a great author.” At the end of their senior year, each student must defend their essay in an hourlong oral examination in front of three “tutors,” as St. John’s calls its professors. Choosing a topic for a senior essay is thus a major decision for each student.

I was not able to obtain Warnagiris’s senior essay; a spokesperson for St. John’s said that the essays are not available online, and only those that win college prizes are stored at the school — and Warnagiris’s did not win a prize. But its title was listed in the school’s 2002 commencement pamphlet, and it comes straight out of ancient Greece: “Reason at all Cost: The Defining Human Quality in Epictetus’ Discourses.”

I don’t know what Warnagiris wrote about Epictetus, or whether the philosopher has continued to impact his thinking, but in the years since Warnagiris graduated from college, Epictetus, a relatively obscure Stoic philosopher who lived 2,000 years ago, has become a surprise rock star in the strange world of the alt-right.

The alt-right has laid claim to Epictetus and a select group of Stoics and other ancient thinkers to underscore their view that they are the defenders of a traditional, white-male dominated Western civilization that is under siege today from the left.

Donna Zuckerberg, a classics scholar and author of “Not All Dead White Men” (and the sister of Facebook founder Mark Zuckerberg), wrote in the Washington Post in 2018 that “one of the most insidious and disturbing examples of classical appropriation by the alt-right is its embrace of Stoicism.”

The radical right’s adoption of Epictetus and other Stoics is particularly odd, because those philosophers advocated for a rational life in which each person accepted that they could only control themselves and their own emotions and behavior, not the external world. Epictetus wrote in the Discourses that “the appropriate response to the death of your child is to say to yourself, ‘I knew I had fathered a mortal,’” observed Zuckerberg.

“It may seem strange that the alt-right, of all groups, would embrace a philosophy hostile to anger,” Zuckerberg wrote. “Online, however, many influential alt-right writers profess to be devotees of Stoicism.” She noted that Marcus Aurelius’s “Meditations” and Epictetus’s “Enchiridion” are among the “recommended texts on the Red Pill subreddit.”

Apparently, the radical right has adopted Epictetus because they think that exerting control over one’s emotions is a masculine ideal. A real man could control his emotions and direct his energy into action. It is as if the alt-right sees Epictetus as an ancient version of Gary Cooper’s character in “High Noon,” the quiet marshal who stands alone against the bad guys, or Matt Damon’s Jason Bourne, the stern amnesiac who finally remembers who he is and tries to fight against evil forces inside the CIA.

This fan-boy approach to the Stoics within the alt-right may seem laughable, but it’s a symptom of something deeper and more dangerous. A belief that they are the guardians of Western civilization against the advancing left-wing hordes seems to tie together both alt-right provocateurs and other conservative intellectuals, and they all now seem to be converging at the extreme edge of the political spectrum. And this widely held fear of the looming loss of Western civilization seems to be leading many conservatives to believe that overthrowing American democracy may be necessary to save the country.

“The New Right rarely expresses its ambitions as a democratic proposition,” wrote Sam Adler-Bell in The New Republic in December, because “[i]ts adherents are not convinced democracy is the way to go.”

While Epictetus makes his star turn within the alt-right, Warnagiris’s life and career remain in limbo. The Justice Department recently listed his case as one of many from the insurrection that are still pending. And a Marine Corps spokesperson said Wednesday that a board of inquiry was held at Quantico in the fall of 2021 “to show cause for retention in the Marine Corps” — in other words, to determine whether he should be allowed to remain in the Marines.

For now, Warnagiris remains an active-duty Marine, assigned to the training and education command at Quantico.