“The Gulfies play the blob like a fiddle,” a U.S. intelligence official told The Intercept. 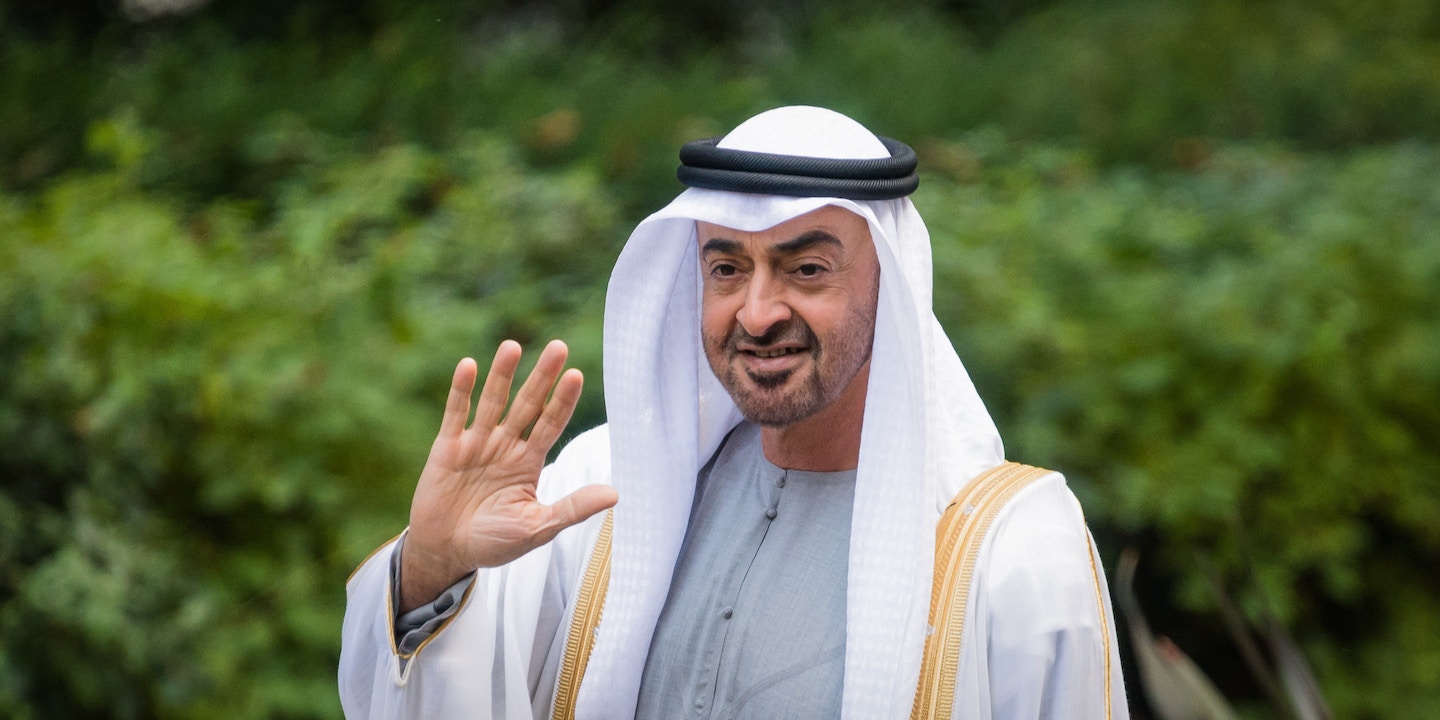 Amid mounting global criticism of his invasion of Ukraine, Russian President Vladimir Putin took time on March 1 for a call with a counterpart who has proved himself increasingly reliable: Mohammed bin Zayed, crown prince of Abu Dhabi and the de facto ruler of the United Arab Emirates.

Based on Russia’s public version of the call, Bloomberg reported that the crown prince “stated Russia’s right to defend its national security” — an extraordinary concession to Moscow. But the quote was quickly removed, with a note reading that a new version of the story “updates from fifth paragraph with UAE statement.” When the UAE issued its own readout of the call, the reference to Russia’s right to defend itself wasn’t there. Bloomberg went with the Emirati version.

“We just updated the story after the UAE put out a statement,” the article’s author, Bloomberg reporter Paul Wallace, told The Intercept. “Russia’s government put one out first, and there was nothing from the UAE for a couple of hours or so. So we only had the Kremlin’s take initially.”

While it’s of course possible that Russia misrepresented the call’s contents, the UAE’s sympathy for Moscow in the Ukraine conflict is hardly a secret. The National, a UAE-owned newspaper, ordered its foreign staff to not refer to Russia’s invasion of Ukraine as an “invasion,” according to an internal memo published by Telegraph reporter Campbell MacDiarmid. “It was shared with me because people on the foreign desk get really dispirited by editorial interference,” MacDiarmid, who used to work for the newspaper, told The Intercept. “I would imagine that the UAE Foreign Ministry or similar handed the directive to [Editor-in-Chief] Mina Al-Oraibi.” Asked to comment on the directive, Al-Oraibi did not dispute the authenticity of the memo but referred The Intercept to an article, published one day prior to MacDiarmid’s reporting, in which The National referred to Russia’s invasion of Ukraine.

The call between Putin and MBZ had come less than a week after the UAE, despite significant pressure from the U.S., abstained from a vote at the United Nations Security Council to condemn Russia’s war-making. While the world has publicly and privately sanctioned Russian industry leaders, the nation’s oligarchs are finding a warm welcome in the UAE. According to the Wall Street Journal, both the UAE’s and Saudi Arabia’s leaders have reportedly declined to take calls from Biden during the Ukraine crisis. All of this follows the UAE’s decision, along with Saudi Arabia, to collude with Russia to drive up oil prices, sending gas prices to their highest levels in years and generating a bonanza of profits that will undermine the raft of new sanctions slapped on Moscow. The moves were only the latest in a series of developments that have shown the UAE drawing closer to Russia, marking a realignment that threatens to upend decades of warm relations between Abu Dhabi and Washington.

A former senior diplomat and a think tank official not authorized to speak publicly told The Intercept that U.S. diplomats believe Russia and the UAE cut a deal before the February 25 U.N. Security Council vote: The UAE would abstain from voting against Russia on Ukraine matters, and in exchange Russia would vote with the Emiratis on matters relating to Yemen. (The UAE’s United Nations ambassador, Lana Zaki Nusseibeh, has denied engaging in a vote exchange.) On February 28, Russia joined the UAE on the U.N. Security Council in voting to designate Yemen’s Houthi rebels a terrorist group.

Richard Mintz, a spokesperson for the UAE government, did not respond to multiple requests for comment.

Current and former U.S. officials The Intercept interviewed for this story expressed reactions ranging from disappointment to outright betrayal at the UAE’s vote.

“It’s past time we dispense with the fiction that the United Arab Emirates are a reliable security partner for the United States. Between the allegations of their passing U.S.-origin weapons on to terrorist groups in Yemen to their refusal to condemn Putin’s illegal war in Ukraine, it is clear time and again that they do not share our values or our sense of security,” Rep. Ilhan Omar, D-Minn., a House Foreign Affairs Committee member, told The Intercept. “The Biden administration should have stopped the Trump F-35 and drone sales on the grounds of human rights and civilian protection in Yemen, but since they did not, I hope this gives them the push they need to halt that sale immediately,” she said, referring to an agreement former President Donald Trump inked on his final day in office to sell the UAE 50 F-35 fighter jets, drones, and other defense equipment totaling $23 billion.

A senior Democratic Senate aide, who was not authorized to speak publicly, echoed similar frustrations: “When you consider the enormous amount of support, even deference, the U.S. has shown to the UAE, their abstention is really regrettable.”

In addition to Congress, U.S. national security officials expressed dismay at the UAE’s vote. “In supporting Russia on Ukraine, the UAE is not only showing astonishing ingratitude for America’s providing Gulf security for the last 50 years,” said Robert Baer, a retired CIA officer. “And that’s not to mention all the blood Americans have shed.”

The U.S. military acts as a security guarantor for the UAE against regional adversaries like Iran and Yemen’s Houthi rebels. When Houthi forces in Yemen launched missiles at an Emerati air base in January, endangering U.S. troops stationed there, it was the U.S. military that reportedly intercepted the missiles. That was only part of a prompt defense response by Washington that would include sending the UAE a squadron of advanced F-22 fighter jets and the guided missile destroyer USS Cole, as well as a personal visit from U.S. Central Command chief Kenneth F. McKenzie. “Not a bad deal [for] them,” a senior Army official remarked to The Intercept.

“Even [Iranian President Ebrahim] Raisi called for a ceasefire,” complained one U.S. intelligence official. “The Gulfies play the blob like a fiddle.”

The tension is unusual for the oil-rich country, whose lavish spending on public relations outfits and think tanks that hire innumerable former U.S. officials has in the past insulated it from criticism in Washington, despite its sordid human rights record, including war crimes in Yemen and jailing of activists domestically. Regarding the U.N. Security Council alone, the UAE has hired dozens of strategic communications staffers to press its interests at the United Nations, as one former senior U.S. diplomat who worked at the U.N. told The Intercept. (Foreign lobbying disclosures with the Justice Department confirm that the UAE’s United Nations mission has signed agreements with the Glover Park Group, a Washington-based communications consulting firm run by several former Democratic White House officials.) The UAE has even hired two former aides to Samantha Power, who currently heads the U.S. Agency for International Development under President Joe Biden.

In a series of entreaties to top Emirati officials, the Biden administration has gone to considerable lengths to make its position on Ukraine clear. On January 4, one month before the invasion, Secretary of State Antony Blinken spoke with the UAE’s foreign affairs minister about Russia’s military buildup on Ukraine’s borders — a clear indication of its importance to the administration. But on February 23, days after Russia moved troops into Ukraine, the UAE’s foreign minister touted the “strength and solidity” of the country’s relationship with Moscow, as well as its interest in expanding cooperation.

The next day, Blinken spoke with the UAE’s foreign minister, condemning Russia in no uncertain terms and highlighting, according to a readout, “Russia’s premeditated, unprovoked, and unjustified attack against Ukraine and the importance of building a strong international response to support Ukrainian sovereignty through the UN Security Council.”

Despite the discussion, on February 25 the UAE abstained from voting on the U.N. Security Council resolution condemning Russia — joining China in doing so, much to the vexation of U.S. officials. Despite a wave of criticism, on February 28 Russia’s foreign minister announced that Moscow had taken another high-profile call with the UAE’s foreign minister, in which they discussed “further development of comprehensive Russian-UAE ties,” stressing that it had been at the request of the Emiratis.

“The Emirati vote in the U.N. Security Council further showed that the U.S.-UAE relationship is a one-way street where the U.S. makes massive sacrifices for this small authoritarian state and doesn’t even get solidarity in the Security Council in return,” said Trita Parsi, executive vice president of the Quincy Institute. “Ultimately, the blame should not go to the UAE — they are ruthlessly pursuing their national interest — the blame is on us for not pursuing ours.”