How Does a Conventional War Become Nuclear?

It remains unlikely that Russia’s war in Ukraine will escalate to a nuclear conflict — as long as NATO does not engage directly. 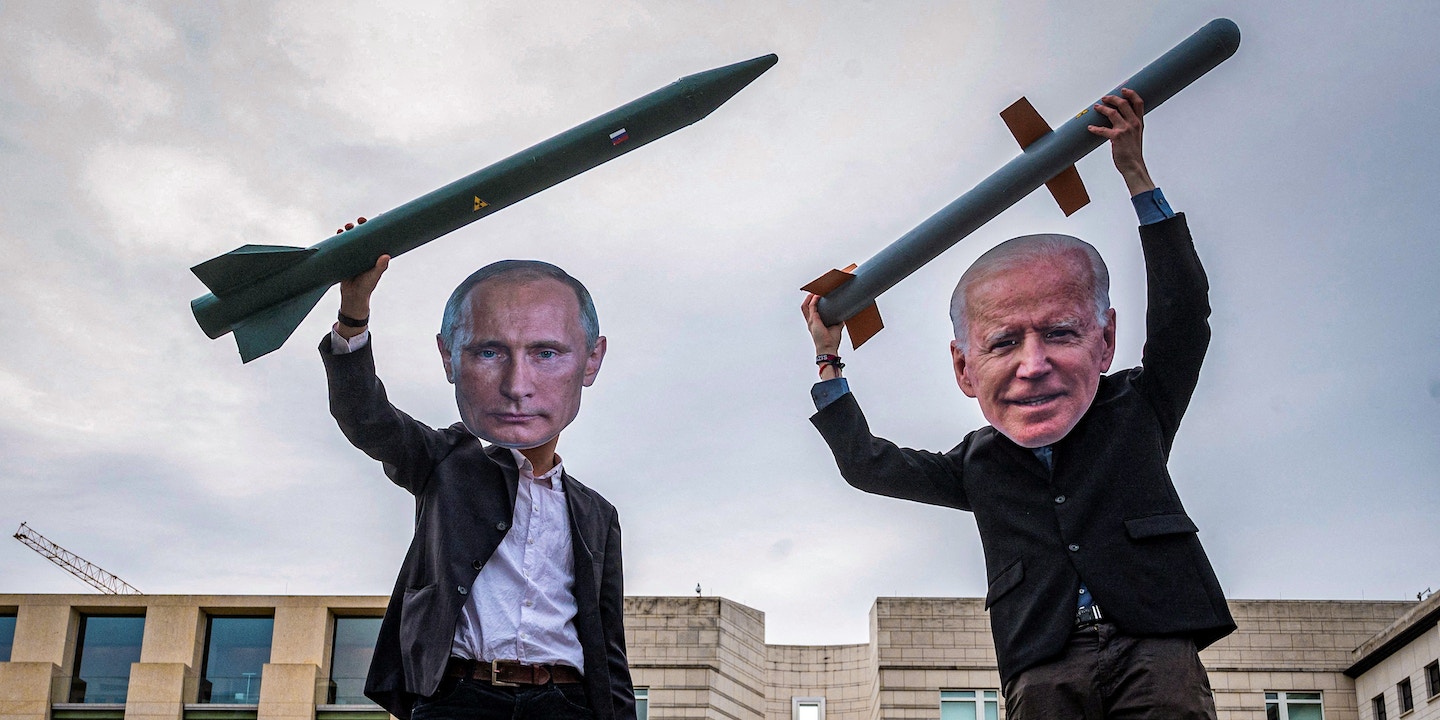 Russian President Vladimir Putin set the world on edge when he put his nuclear forces on “high alert” on February 28, days after he invaded Ukraine. But the United States deemed the move more of a provocative political gesture than an operational shift, and Russia hasn’t shown signs of using its nuclear forces since. While Ukraine’s continued denial of a swift victory for Russia may lead Putin to rely on more brute force — like the cluster bombs he’s already used to attack Ukrainian civilians — experts widely believe that the risk of nuclear escalation remains extremely low, as long as NATO does not directly engage in war.

“Russia, despite its military challenges with the invasion, still has a preponderance of conventional forces,” Daryl Kimball, executive director of the Arms Control Association, told The Intercept. “Their formal military doctrine only allows for the potential use of nuclear weapons in two major circumstances: one in which Russia is attacked by a country like the United States with long-range strategic nuclear weapons, which would lead them to retaliate, or if there’s a military conflict that puts at risk the Russian state itself. Now, this conflict, while gruesome and brutal to the Ukrainians, does not represent a threat to the Russian state.”

But the risk is certainly greater than it was before the invasion, and the longer the war carries on, the more willing Putin may be to deviate from Russia’s standard operating procedure, Kimball said. A prolonged conflict, especially if Putin decides to use more destructive weapons and engage in reckless acts, like damaging the Chernobyl nuclear power plant, also carries the risk of drawing NATO in further, resulting in a broader European conflict in which Putin may come to fear a greater threat to Russia.

“It is hard to imagine a scenario that Putin would use a [nuclear] weapon in Ukraine unless he felt that he was losing and that the [loss] could result in his losing power (and possibly his life),” nuclear expert and Quincy Institute fellow Joe Cirincione wrote to The Intercept. “The possibility of losing the war rises dramatically if the US and NATO were to engage.”

Under President Joe Biden, the United States has tried to draw a fine line to avoid a full-blown war: The administration is currently supporting the Ukrainian resistance with light weapons like anti-tank Javelin missiles but rejecting dangerous calls to establish a no-fly zone, which would mean direct conflict with Russia, and requests to route Polish fighter jets to Ukraine through a NATO military base in Germany. But crucially, neither Russia nor the United States governs its nuclear arsenal with a no-first-use policy, which would take these weapons off the table in a conventional conflict.

According to Cirincione, much of the problem stems from Russia and the U.S. viewing nuclear weapons as “an extension” of conventional arms, meaning that they’re another type of munition that could be used on a battlefield. The outlook is made worse by both countries’ increased reliance on so-called low-yield munitions in their military strategies.

“Any nuclear weapon, regardless of yield, would have devastating humanitarian and environmental consequences and risk escalation to a ‘full-blown’ nuclear war.”

The term “low-yield” is a misnomer: This class of extremely destructive arms includes the 15- and 21-kiloton bombs that the U.S. dropped on Hiroshima and Nagasaki, killing hundreds of thousands of people either in the immediate impact or over the months of radiation sickness that ensued. But it does help distinguish those nuclear weapons from the most powerful, doomsday-style weapons like intercontinental ballistic missiles or the U.S.’s 1.2-megaton B83 gravity bomb. For reference, the U.S.’s smallest nuclear weapon, the B61 gravity bomb, has a 0.3-kiloton setting, the same amount of power as the 2020 ammonium nitrate explosion in Beirut that killed more than 200 people.

If Russia were to use a nuclear weapon in the event of a wider conflict with NATO, it’s widely assumed that Putin would start with a low-yield munition. Russia has an estimated 1,900 such weapons that rely on a variety of delivery methods — by air, ground, and sea. But there’s no guarantee that it would stop there.

“Any nuclear weapon, regardless of yield, would have devastating humanitarian and environmental consequences and risk escalation to a ‘full-blown’ nuclear war,” Monica Montgomery, a research analyst at the Center for Arms Control and Non-Proliferation, told The Intercept.

Despite the dangers, some analysts believe that the U.S. should prepare its forces as if a limited nuclear war were winnable. The idea led former President Donald Trump to put the U.S. on a course to develop more low-yield nuclear weapons. The U.S. already had about 1,000 of these types of munitions.

The review, a document each president since Bill Clinton has released to publicly declare their nuclear weapons strategy, also claimed that Russia is increasing its nonstrategic arms, referring to munitions with lower yields and shorter ranges that could be used in a nonnuclear conflict. Hans Kristensen at the Federation of American Scientists described this claim as “exaggerated” in a 2019 article for Forbes, arguing that Russia has actually been reducing its total numbers.

Nevertheless, the previous White House followed through on its plans by seeking a brand new nuclear-armed, sea-launched cruise missile and placing a low-yield warhead on some submarine-launched ballistic missiles. (It also decided to keep around the 1.2-megaton B83 gravity bomb, the largest in the U.S. nuclear arsenal, which the Obama administration had wanted to retire.)

Biden was slated to release his own Nuclear Posture Review early this year, though that has likely been delayed as a result of the war in Ukraine. Disarmament advocates hope that the president, who said on the campaign trail that the U.S. “does not need new nuclear weapons,” will reverse Trump’s course. But pressure to maintain the status quo is likely to grow now.

“If President Biden sheds or does away in any way with nuclear capabilities as has been reported, I predict bipartisan opposition in the House and Senate that will override it and continue to fund these systems,” Rep. Doug Lamborn, R-Colo., ranking member of the House Armed Services strategic forces subcommittee, said during a March 1 hearing on U.S. nuclear forces. In addition to Russia, he warned about nuclear militarization by China and North Korea.

“It’s going to be the same old, same old,” Rep. John Garamendi, D-Calif., a member of the panel, told The Intercept. “The Republicans on the Armed Services Committee and probably just generally cannot ever have enough nuclear weapons.”

By expanding the U.S. arsenal of low-yield nuclear weapons, the Trump administration forced arms control advocates to shift their focus. Years ago, Senate Democrats actively campaigned against a missile called the Long-Range Standoff weapon, intended to replace the U.S.’s aging air-launched cruise missile and its warhead, which has a range of yield settings, including a low-yield option. When asked by The Intercept about his stance on this category of weapons and his past opposition to the replacement, Sen. Chris Van Hollen, D-Md., instead called out the sea-launched weapons started under Trump: “It’s not only a waste of money, it’s destabilizing.”

Montgomery, of the Center for Arms Control and Non-Proliferation, described the jockeying for priorities in the nuclear arms control arena as a battle for attention. The W76 warhead, “because of its uniquely destabilizing position on our strategic nuclear submarines, and the [sea-launched cruise missile] because of the lines that it blurs between conventional and nuclear use,” she said, “were chosen as higher priorities and also most likely to be able to oppose.”

While the public awaits Biden’s decisions on his nuclear arms policies, including whether to adopt a no-first-use stance, the dangers of nuclear weapons abound, even outside the context of Ukraine. The Wall Street Journal reported this week that North Korea recently tested components of a new intercontinental ballistic missile system, and nuclear-armed India said Friday that it accidentally fired a missile into neighboring Pakistan.

“Over the past decade, both Russia and the US have gone back to doctrines developed in the 1950’s that envision fighting with low-yield nuclear weapon[s] on the battlefield,” Cirincione wrote to The Intercept. “Once again, both countries are developing and fielding weapons they believe are ‘more usable,’ that would convince political leaders that they could cross the nuclear threshold and not risk escalation to global thermonuclear war. This is a dangerous illusion.”