The first state constitutional protection of reproductive rights hints at the contradictions and fears of a divided movement. 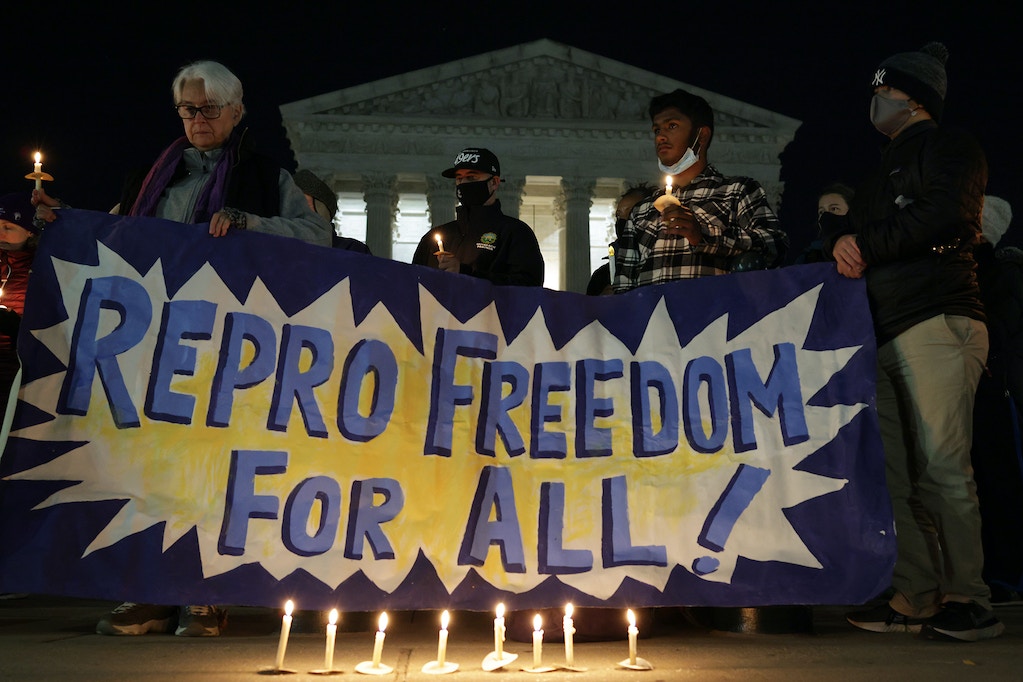 Activists participate in a candlelight vigil on abortion rights in front of the U.S. Supreme Court on Dec. 13, 2021, in Washington, D.C.

If the Supreme Court overturns Roe v. Wade, 26 states are “certain or likely to ban abortion,” according to the Guttmacher Institute. In December, the court heard arguments in Dobbs v. Jackson Women’s Health Organization, addressing Mississippi’s Gestational Age Act banning abortion after 15 weeks’ pregnancy. The law is a deliberate violation of Roe, the 1973 ruling legalizing abortion. Most observers expect the conservative majority to rule in Mississippi’s favor. In that case abortion law would revert to the states, where in vast red swaths of this nation it has been so slashed and shredded that it’s already practically confetti.

Meanwhile, 15 states are doing what they can to rescue the legal right to abortion. Twelve are crafting legislation, like New York’s Reproductive Health Act, that reaffirms in statute the court’s ruling in Roe. Three, and the District of Columbia, are moving beyond Roe: codifying a right to abortion throughout pregnancy without state interference. And one state, Vermont, is doing a little of both: proposing a state constitutional amendment that enshrines individual reproductive liberty as a basic right — and then hedging, suggesting that it may not be that basic after all.

These varying approaches show that the reproductive justice movement is divided not just about how to shelter legal abortion in its last redoubts now, but also how to win it back for all and for good. Before Roe, the question was: Reform abortion laws or repeal them altogether? Today that translates to: Hang onto a tattered Roe or scrap it and start anew? Vermont’s hybrid — or self-contradictory — strategy may hint of both a realization and a fear. Roe is probably a dead letter. But it is still a letter, something to hold onto. The movement’s confidence may be as tattered as the right it’s trying to defend.

What is wrong with Roe? A lot. First, it’s based on the right of privacy established in Griswold v. Connecticut, a 1965 ruling affirming a married couple’s freedom to use birth control. Many critics (including me) have argued that privacy — a young, relatively untested “penumbral” right not named in the Constitution but implied by other amendments — is a fragile support for the weighty human right of reproductive autonomy. Why not, say, the 13th Amendment’s prohibition on involuntary servitude, the use of one’s body against one’s will?

The second weakness is the framework the court set up in Roe, which shifts the balance of the state’s interest from the pregnant person’s rights as independent actor (and the fetus as part of the pregnant person) in early gestation to the fetus’s potential life as it matures toward viability: the point at which a baby can survive outside the womb, now about 24 weeks. A decade after Roe, Justice Sandra Day O’Connor alerted her colleagues that science was pushing viability earlier and earlier in gestation, progressively shaving weeks off the mother’s liberty; Roe, she said, was “on a collision course with itself.” And indeed, hardly an instant later, abortion opponents started revving the engines to accelerate that collision, promoting the myths — and passing laws based on them — that a fetus can feel pain during abortion or survive on its own at the first indication of a “fetal heartbeat” less than six weeks after conception. During oral arguments in Dobbs, Chief Justice John Roberts showed eagerness to eliminate the viability standard altogether, in effect cutting the brake line that keeps Roe from crashing.

The third flaw in the past 40-some years of legally defending Roe is the test O’Connor proposed as more enduring than viability: that the law impose no “undue burden” on the ability to get or provide an abortion. Undue burden is even feebler than privacy. At this point, there may be no burden SCOTUS’s conservatives consider undue: not driving thousands of miles, not having an ultrasound probe shoved up your vagina for no reason, not paying hundreds of dollars out of pocket. Apparently, no emotional burden is undue either. During the Dobbs colloquy, Trump appointee Justice Amy Coney Barrett brought up “safe haven laws,” which allow people to leave an unwanted newborn at a hospital or fire station anonymously and without criminal liability. Wouldn’t these provisions “take care of [the] problem” of forced parenthood, Barrett mused. Julie Rikelman, attorney for the abortion provider, responded that the issue at hand was forced pregnancy, which “imposes unique physical demands and risk on women and in fact has impact” on their families and livelihoods. Court etiquette inhibited Rikelman from voicing what was likely on her mind: “And which of your seven children would you put in a basket and float down the Nile, Your Honor?”

Vermont’s Reproductive Liberty Amendment aims to overcome these weaknesses. Introduced in 2019, the amendment easily passed the state Legislature, the mandated second time, this session. If the electorate votes yes on Proposition 5 on the November ballot, it will become part of the Vermont Constitution the next day. This is what it says:

That an individual’s right to personal reproductive autonomy is central to the liberty and dignity to determine one’s own life course and shall not be denied or infringed unless justified by a compelling State interest achieved by the least restrictive means.

At its most basic, the amendment makes permanent “conditions on the ground,” Senate President Pro Tempore Becca Balint, a co-sponsor and active champion of the bill, told me. This is a good thing, because at present Vermont’s policies are exemplary. The state requires no parental involvement in a minor’s decision to end a pregnancy, for instance, and compels Medicaid and private insurance to cover abortion and birth control. Healthy majorities support reproductive justice. The amendment passed the House by a vote of 107 to 41. Seven in 10 Vermont adults favor the right to abortion in most cases.

In this sense, the amendment might be more symbolic than practical. Still, as the first in the nation, the text serves as a signpost for other states. The problem: It’s hard to know which direction the signpost is pointing.

The first part, up to and including “shall not be denied or infringed,” is radical. It asserts that the roughly half of humans who bear uteruses are free to do with their bodies as they wish, period. The second half telegraphs second thoughts. The phrase “unless justified by a compelling state interest” hints that there might be legitimate and compelling justification to violate the fundamental right the state just finished declaring.

What compelling interest might Vermont have to violate the human right to bodily autonomy? This is not a theoretical question. All sorts of arbitrary and burdensome restrictions on abortion claim a compelling state interest. “Whereas the State of Florida has a compelling interest from the outset of a woman’s pregnancy in protecting the health of the woman and the life of the unborn child,” and “the pregnant woman has a compelling interest in knowing the likelihood of her unborn child surviving to full-term birth based upon the presence of cardiac activity,” reads Florida’s Heartbeat Act, language that is nearly identical to other fetal heartbeat laws, including Texas’s, which effectively ban abortion at six weeks. In defending its 15-week ban, Mississippi had the chutzpah — and the wit — to use Roe and other pro-choice precedents against themselves. “The Supreme Court has long recognized … an ‘important and legitimate interest in protecting the potentiality of human life,’” it argued, quoting Roe. It went on to cite the state’s “interest in protecting the life of the unborn” as well as its “legitimate interests from the outset of pregnancy in protecting the health of women,” both from Planned Parenthood v. Casey, which reaffirmed Roe in 1992.

The Vermont amendment’s sponsors do not agree that its second clause kneecaps the first. The terms “compelling state interest” and “least restrictive means,” they note, echo the language of “strict scrutiny,” the highest level of judicial review. To be upheld as constitutional under this standard, a law must further a “compelling governmental interest” that cannot be achieved in any other way — and that way must be narrowly defined. One of the few triggers for strict scrutiny is the challenge that the legislation abridges a fundamental right.

Appending an asterisk to a human right is asking for trouble.

If the “unless” clause is compromise language intended to win more votes, neither Balint nor the chief sponsor, Vermont Senate Health and Welfare Committee Chair Ginny Lyons, admitted as much. Both insist that Clause No. 2 only strengthens the fundamental right to reproductive liberty. “Remember that the Roe v. Wade decision was based on something called privacy that doesn’t exist in the Constitution,” Lyons told me. “What we’ve learned from that is to place reproductive autonomy in the broader context of the state constitution.”

Article 1 of the Vermont Constitution proclaims: “All persons are born equally free and independent, and have certain natural, inherent, and unalienable rights.” Interestingly, also on Vermont’s ballot this November is Proposition 2, asking voters to ratify another amendment — no easy task in this state. Prop 2 repeals Article 1’s second half, which abolished servitude or slavery, “unless bound by the person’s own consent” or in payment of a debt. In its place would be the simple sentence “Slavery and indentured servitude in any form are prohibited.”

Appending an asterisk to a human right is asking for trouble. Does the Eighth Amendment prohibit cruel and unusual punishment “unless justified by a compelling state interest”? Does the 19th proclaim, “The right of citizens of the United States to vote shall not be denied or abridged by the United States or by any State on account of sex — unless justified by a compelling state interest”? The one U.S. constitutional amendment with an exception written into it is the 13th, banning slavery and involuntary servitude “except as a punishment for crime.” As Michelle Alexander and other scholars argue, this loophole, inserted to gain ratification from Western states ambivalent about slavery, allowed the reincarnation of slavery in striped prison garb during Jim Crow and led to the mass incarceration of the descendants of enslaved people. What if Vermont’s “unless” clause, intended to preempt violation, actually invited it?

Now that there’s little left to lose, we might as well start over with what we really want.

At a meeting in the late 1960s, Cindy Cisler, a Redstockings co-founder and leading feminist organizer for repeal — not reform — of abortion laws, held up a blank piece of paper. “This,” she declared, “should be the abortion law.”

Then we should demand what we need from the government when it comes to abortion law. That is, nothing.