An internal email shows that despite its anti-war stance, the company bowed to Kremlin decrees. 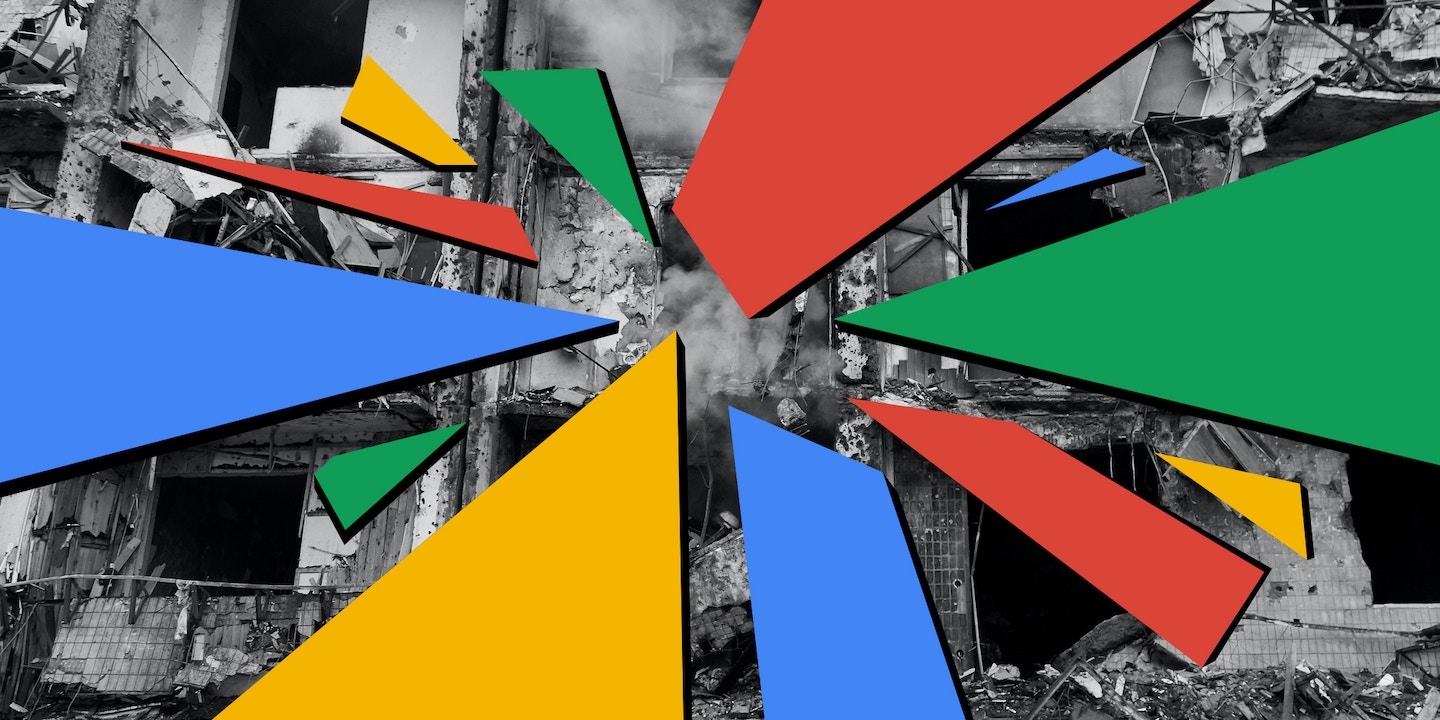 In early March, contractors working for Google to translate company text for the Russian market received an update from their client: Effective immediately, the ongoing Russian war against Ukraine could no longer be referred to as a war but rather only vaguely as “extraordinary circumstances.”

The internal email, obtained by The Intercept, was sent by management at a firm that translates corporate texts and app interfaces for Google and other clients.

The email passed along instructions from Google with the new wording. The instructions also noted that the word “war” should continue to be used in other markets and that the policy change was intended to keep Google in compliance with a Russian censorship law enacted just after the invasion of Ukraine.

Asked about the guidance, Google spokesperson Alex Krasov told The Intercept, “While we’ve paused Google ads and the vast majority of our commercial activities in Russia, we remain focused on the safety of our local employees. As has been widely reported, current laws restrict communications within Russia. This does not apply to our information services like Search and YouTube.”

According to a translator who spoke to The Intercept, the orders apply to all Google products translated into Russian, including Google Maps, Gmail, AdWords, and Google’s policies and communications with users. (The translator asked for anonymity to avoid reprisal by their employer.)

The internal memo helps explain why some Google webpages, including an advertising policy and video help document found by The Intercept, use euphemistic terms like “emergency in Ukraine” in their Russian version but “war in Ukraine” in the English version.

The censorship law, signed by Russian President Vladimir Putin on March 4, created harsh criminal penalties of up to 15 years in prison for disseminating so-called false information about the Russian military. This is widely believed to include referring to Russia’s assault on Ukraine as a war or invasion, given that the Kremlin had previously drawn a hard line against such terms. The Kremlin calls the war a “special military operation,” and its internet censorship board has reportedly threatened to block websites that use terms like “invasion.”

Like many other American companies, Google swiftly declared its support of Ukraine and opposition to the Russian invasion after the attack began. And like several other Silicon Valley titans, it also implemented new policies to stifle the Kremlin’s ability to propagandize. A March 1 company blog post by Google global affairs chief Kent Walker stated, “Our teams are working around the clock to support people in Ukraine through our products, defend against cybersecurity threats, [and] surface high-quality, reliable information.” Walker added that Google had “paused the vast majority of our commercial activities in Russia,” including sales to Russian advertisers, sales of advertising directed at Russian YouTube viewers, sign-ups for Google Cloud in Russia, and “payments functionality for most of our services.”

Western commentators have generally lauded Google’s efforts related to the invasion. But the email and translations in Google’s Help Center suggest that its principled stand against Russian state propagandizing is to some extent outweighed by the company’s interest in continuing to do business in Russia.

In an English-language version of a Google advertising policy update note titled “Updates to Sensitive Events Policy,” dated February 27, 2022, the company explained it was freezing online ads from Russian state media outlets because of the “current war in Ukraine,” considered a “sensitive event.” But the Russian version of the post refers only to the “emergency in Ukraine” rather than a “war.” 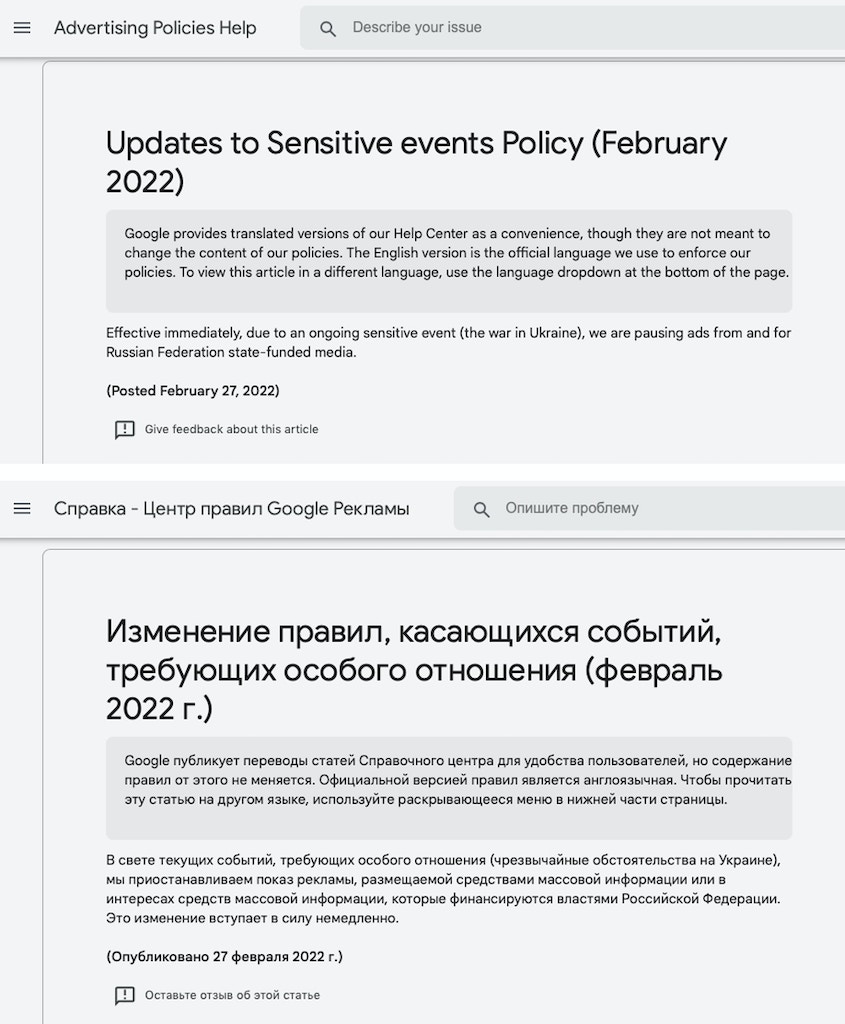 A Google advertising policy page in Russian describes the war in Ukraine as “current events that require special attention (emergency in Ukraine).”

In the Video Help Center, the post “Restricted Products and Services” repeats the warning: “Due to the ongoing war in Ukraine, we will temporarily pause the delivery of Google ads to users located in Russia.” In the Russian version, the warning is again changed: “Due to the emergency situation in Ukraine, we are temporarily suspending ad serving to users located in Russia.” 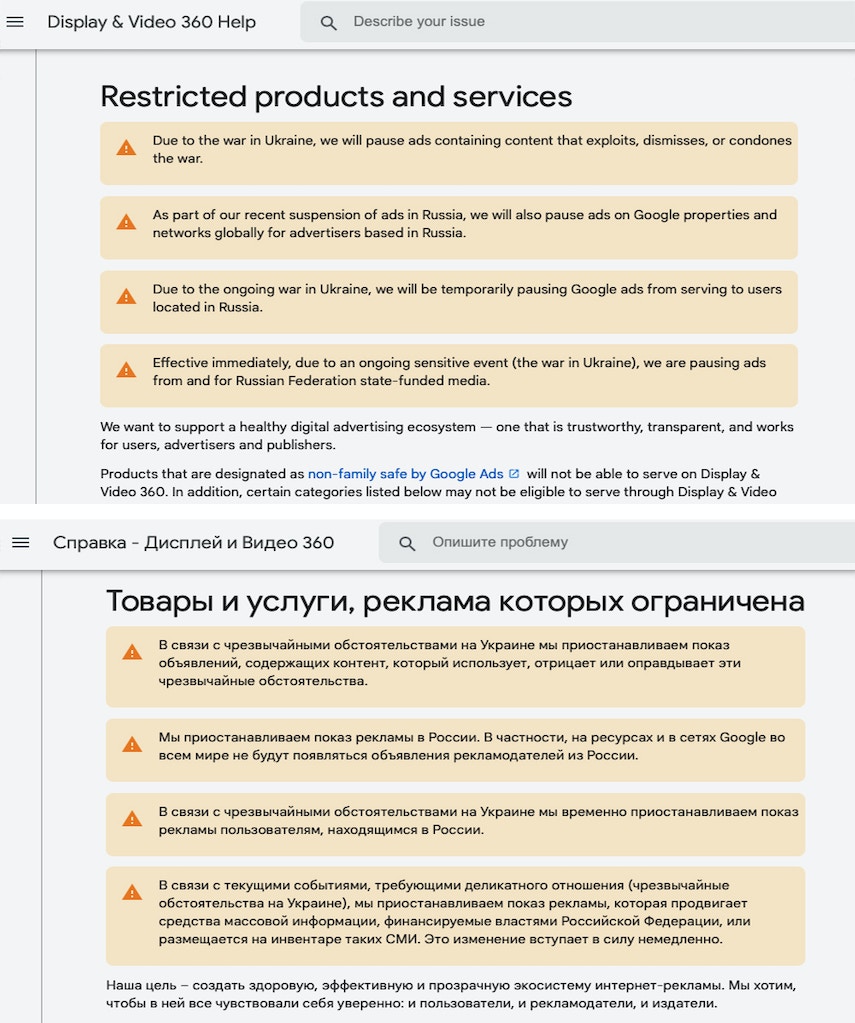 A Google support document explains why the company is freezing certain online ad sales. The English version says it’s because of the “war in Ukraine,” while the Russian version refers to the “emergency situation in Ukraine.”

Another help post found by The Intercept shows a Russian-language version written in compliance with the new censorship law: 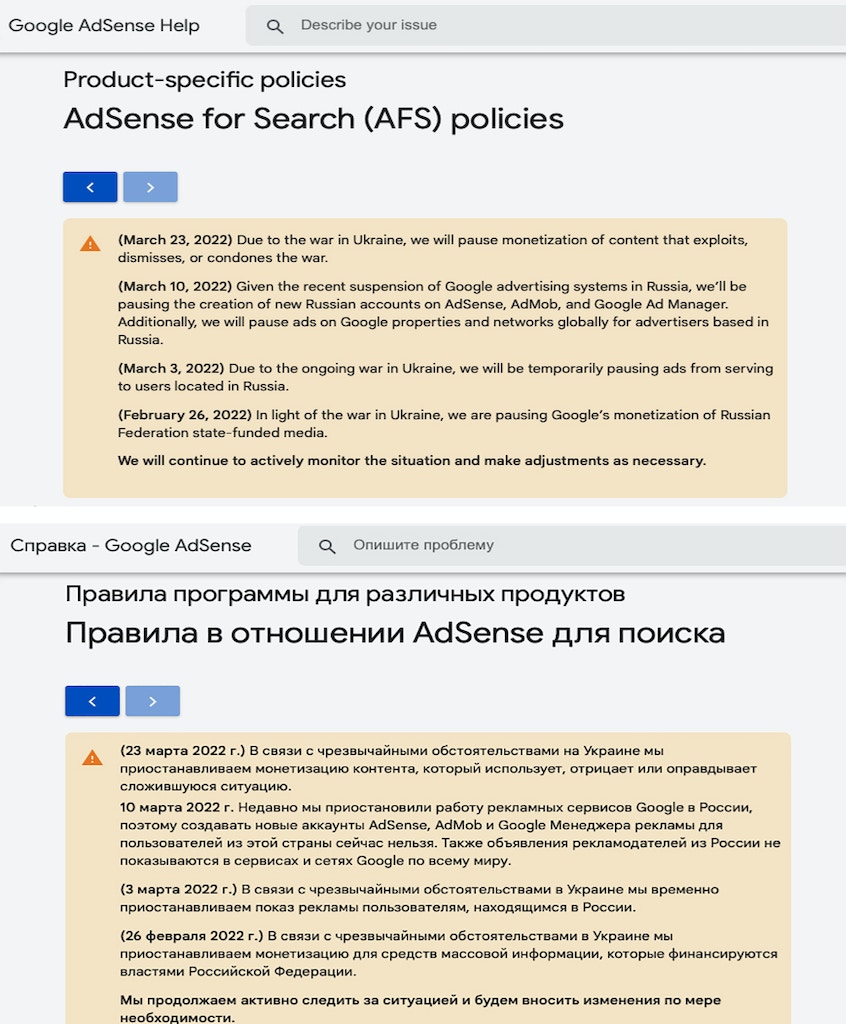 A Google policy page, restricting advertising on certain content, references the “war in Ukraine” in the English version. The Russian version on March 10 referenced the “emergency” in Ukraine, and on March 23 was updated to state,  “Due to the extraordinary circumstances in Ukraine, we are suspending the monetization of content that uses, denies or justifies the current situation.”

In some cases, Russian help pages include both a reference to “war” and a state-sanctioned euphemism; it’s unclear why.

It’s possible an automated translation system is at fault. According to the translator, most translations are done automatically via software. In more sensitive cases — community rules and support pages — there is usually human oversight to ensure accuracy. This source added that any potential usage of the term “war” in the context of Ukraine would be censored across all Google products still available in the Russian market. They also said the euphemism policy would hypothetically apply beyond support page text to other Google products like Maps.

The move is only the most recent instance of acquiescence to Russian censorship demands by Google and its major Silicon Valley peers. In 2019, Apple agreed to recognize the Russian annexation of Crimea in its iOS Maps app in response to Kremlin pressure. In 2021, Google disclosed that it had complied with 75 percent of content deletion requests it had received from the Russian government that year; that same year, both Google and Apple agreed to remove apps affiliated with prominent Putin critic Alexey Navalny.