Trudy Busch Valentine, who joined the race Monday, was crowned queen of the St. Louis elite’s Veiled Prophet Ball in 1977. 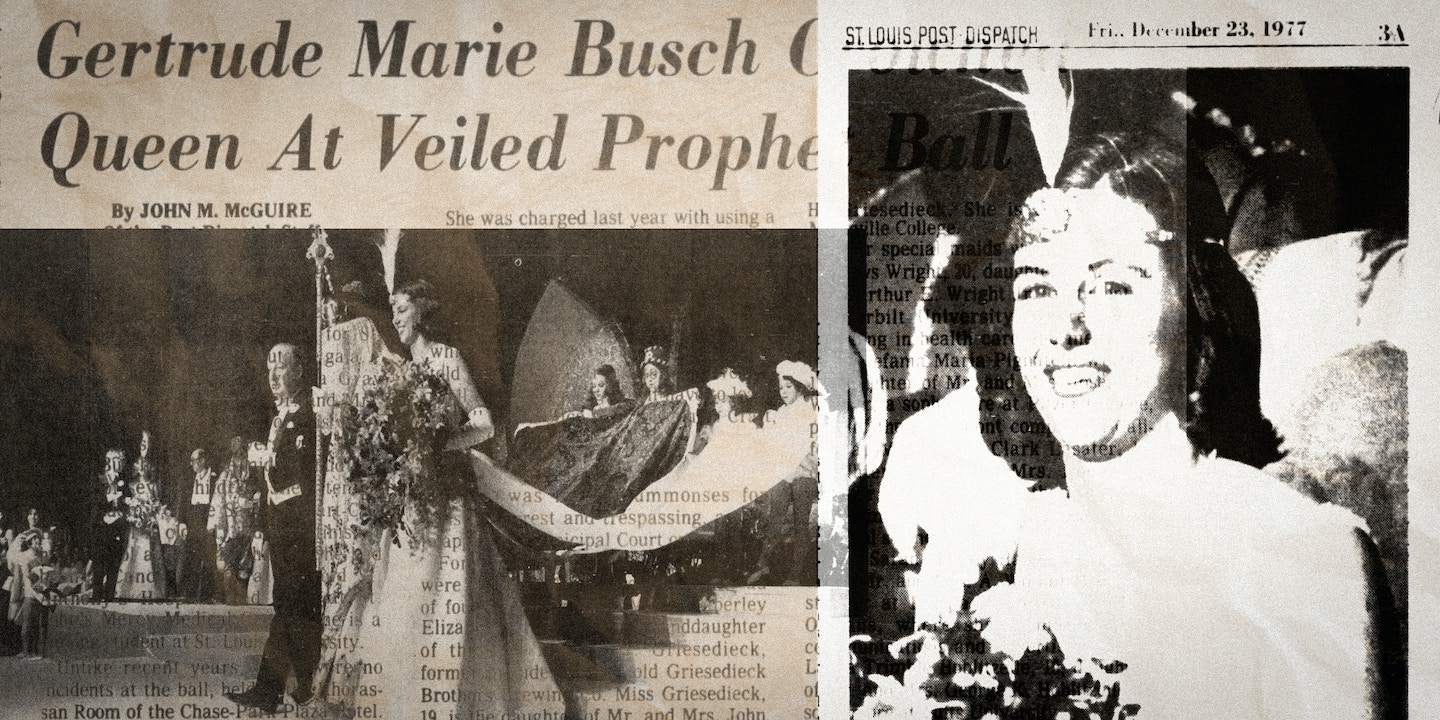 In December 1977, Trudy Busch, an heir to the Anheuser-Busch fortune in Missouri, was crowned “Queen of Love and Beauty” at the controversial Veiled Prophet Ball. Outside, two protesters belonging to a civil rights group, ACTION, were arrested for demonstrating against it. Inside, photos from the St. Louis Post-Dispatch show, Busch stood alongside the “veiled prophet”: a man chosen to oversee the annual ball whose identity remains hidden beneath a white cloth resembling the hoods worn by Ku Klux Klan members.

The 1977 ceremony marked a special anniversary for the Veiled Prophet Organization, a secret society of Missouri elites dedicated to maintaining white supremacy and unchecked corporate power. It was founded by former Confederate officers in the wake of the Great Railroad Strike of 1877 — an effort to forge a populist, multiracial working-class coalition to oppose the era’s robber barons — and began hosting the ball as its annual celebration after federal troops smashed the worker revolt. A hundred years later, the affair was less of a secret but no less controversial. Trudy Busch, crowned “Queen of Love and Beauty,” leaves her throne with the “veiled prophet” during the December 1977 Veiled Prophet Ball in St. Louis.

It would have been difficult for Busch — now Busch Valentine, and a new Democratic candidate for Senate from Missouri — to avoid learning about the controversy. At the time Busch won the title, Black and Jewish people weren’t allowed to join the organization; that wouldn’t come until 1979. In 1972, five years prior to Busch’s crowning, activist Gena Scott entered the ball and unmasked the “veiled prophet”; Scott’s car was later bombed, and her house was vandalized. One of the protesters in 1977 was arrested for using a “disabling chemical spray” at the affair the year prior. And at Busch’s crowning, “There were extensive and extraordinary security measures,” an article in the St. Louis Post-Dispatch said.

“I believe in the importance of working together and healing divisions — and that starts with acknowledging my own past shortcomings,” Busch Valentine wrote in a statement to The Intercept. “I failed to fully grasp the situation. I should have known better, and I deeply regret and I apologize that my actions hurt others. My life and work are way beyond that, and as a candidate for Missouri’s next US Senator, I pledge to work tirelessly to be a force for progress in healing the racial divisions of our country.”

Busch returned at least two more times to the ball. The following year, she “promenaded the room and chatted with the man wearing the golden tunic and thick veils of the Prophet before she was escorted to her seat amid former queens,” according to a January 1979 article in the Post-Dispatch. And in 1990, after decades of protests from civil rights activists, she returned to be honored alongside other former queens. (The event still goes on today.)

The ball’s history exploded in the mainstream press last year, when it was revealed that Hollywood actor and Missouri native Ellie Kemper of the television show “Unbreakable Kimmy Schmidt” was crowned queen in 1999. Kemper issued a lengthy apology, claiming not to have known of the organization’s sordid founding — though the Klan-like regalia, including Grand Wizard-looking costumes, should have been a tipoff. 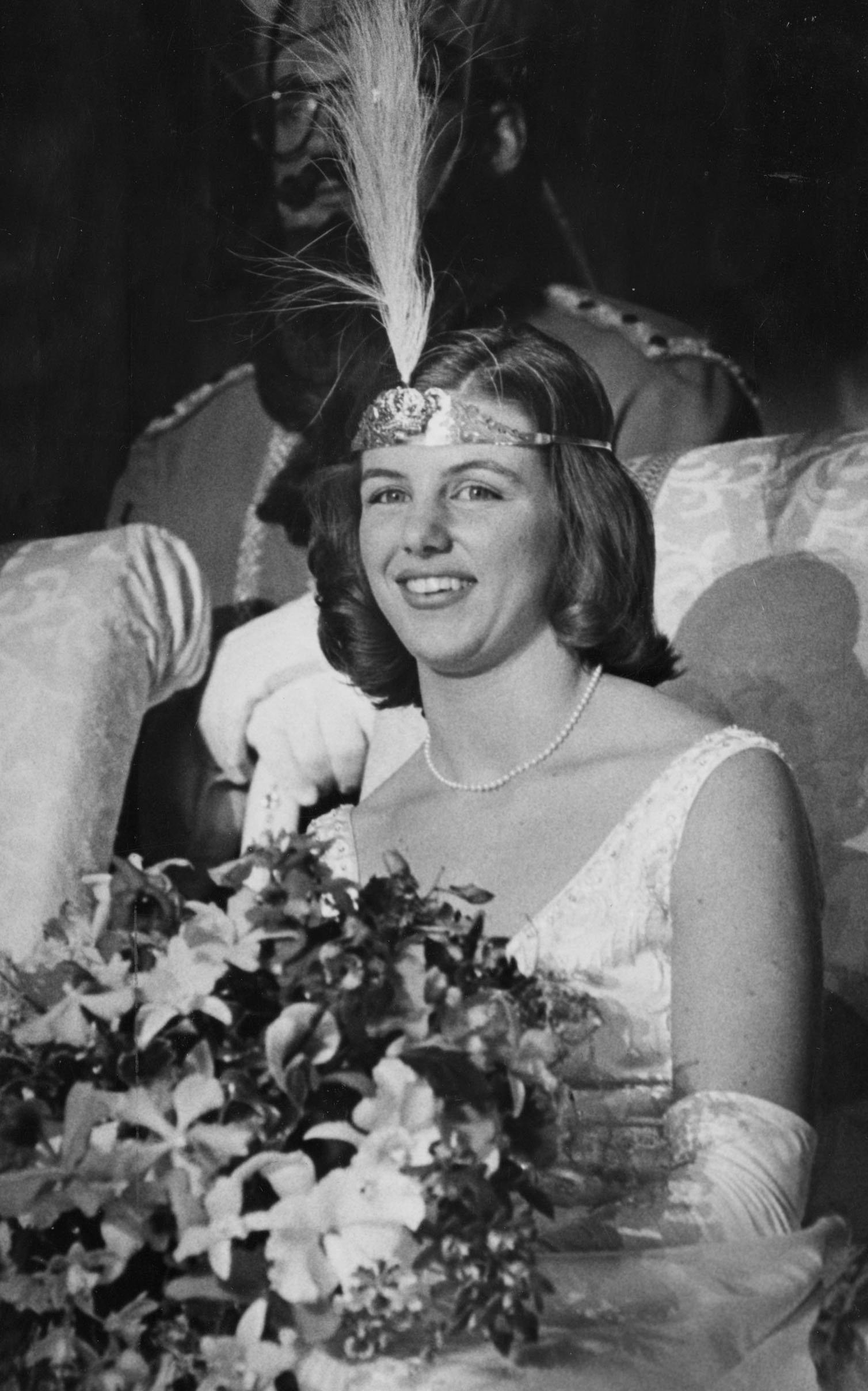 Trudy Busch was crowned queen of the whites-only Veiled Prophet Ball in St. Louis in December 1977.

On Monday, Busch Valentine announced a bid for Senate in the Democratic primary. Her late and unexpected campaign to succeed retiring Sen. Roy Blunt, R-Mo., coincided with the exit from the race of former Democratic state Sen. Scott Sifton, who immediately endorsed her.

Sifton had received the support of many elected Democrats in Missouri, including state auditor Nicole Galloway, but struggled to raise money. Primary opponent and political outsider Lucas Kunce, a populist Marine veteran, had outraised him — along with the many Republicans in the race. With Busch Valentine, the Missouri Democratic Party will get a high-net donor and insider, one who hosted a fundraiser for presidential candidate Hillary Clinton in 2016 at her family estate. Her brother August Busch III is also a prolific donor, giving hundreds of thousands of dollars to a contender in the Republican primary and her potential rival in the general election, Missouri Attorney General Eric Schmitt.

The seat is generally considered a shoo-in for Republicans, though allegations against the GOP frontrunner, former Missouri Gov. Eric Greitens, may create an opening for Democrats. Greitens resigned from the governorship in 2018 after facing accusations of sexual abuse and campaign finance violations. In a court filing last week, his ex-wife Sheena Greitens, a professor of public policy at the University of Texas at Austin, accused him of physically abusing her and one of their sons.

The Senate candidate has denied all the allegations and consistently depicted himself as the victim of a witch hunt like former President Donald Trump, a narrative that’s succeeded thus far with primary voters, who consistently rank him as their first choice. But many in the Republican Party establishment have concerns. In 2012, former Democratic Sen. Claire McCaskill coasted to victory after her Republican opponent came under fire for bizarrely claiming there is such a thing as “legitimate rape” in response to a question about abortion. After last week’s allegations, Blunt, who hasn’t announced an endorsement, called on Greitens to drop out of the race. Meanwhile, Sen. Josh Hawley, R-Mo., has given his support to Rep. Vicky Hartzler, R-Mo., preparing her for an ascent to replace Greitens.