The ADL is leading a charge to cancel a 23-year-old Palestinian activist for a line of poetry it claims echoes a medieval antisemitic trope. 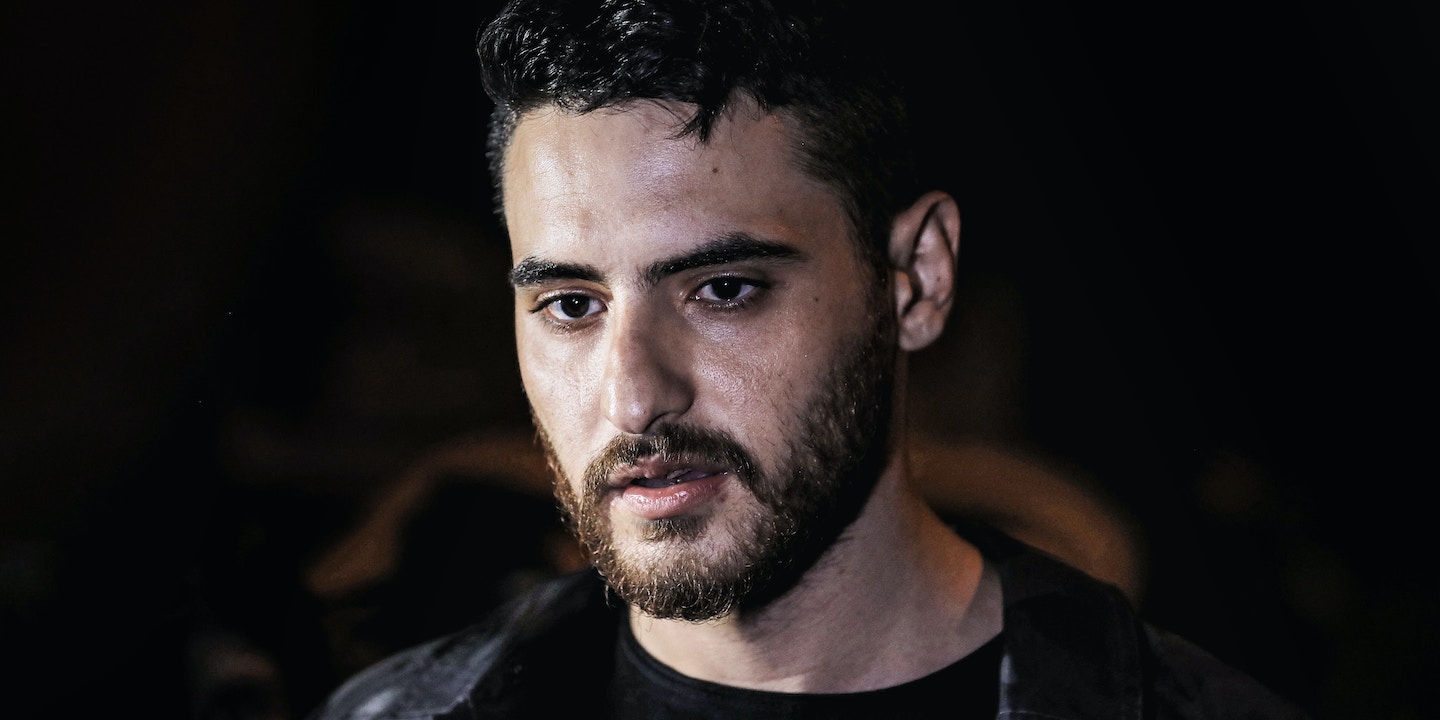 Controversy erupted this week over a young Palestinian activist’s invitation to speak at Georgetown Law School. In advance of the event, the Anti-Defamation League, or ADL, accused 23-year-old Palestinian writer Mohammed El-Kurd of being antisemitic — an allegation that was echoed by conservative media outlets. Though the event on Tuesday went ahead as planned, Georgetown has come under pressure in the media, as well as from some students and faculty, to condemn El-Kurd and disavow the event.

The war of words began a few days before the Georgetown event, when Jonathan Greenblatt, the liberal head of the ADL, shared a dossier accusing El-Kurd of antisemitism based on a selection of his tweets and past writing. Most of the accusations were based on social media posts from El-Kurd loudly chastising Israel and Zionism.

One item from the ADL dossier, however, has become the centerpiece of the campaign against the writer: a line from a poem he wrote that is now being alleged to echo a medieval antisemitic trope known as the “blood libel,” an accusation originated in medieval Europe that Jews consumed the blood of non-Jews for ritual purposes.

The passage in question came from El-Kurd’s book of poetry published last year, “Rifqa.” In one of the poems, El-Kurd, who denies the charges of antisemitism, wrote, “They harvest organs of the martyred, feed their warriors our own.”

The line includes one of the few footnotes in the volume of poetry, directing the reader to a decade-old news story in which the Israeli government admitted to harvesting organs from bodies of Palestinians, as well as some Israelis, without their families’ consent in the 1990s.

El-Kurd denied that the line from the poem had anything to do with the “blood libel” trope, saying in an interview that until very recently he had not been familiar with it. “When I wrote this poem, I was like 14 or 15 years old,” El-Kurd said. “I literally only understood what blood libel was like two months ago. I’d never in my life even heard of this concept.”

The allegation of antisemitism against El-Kurd based on the poem is the only one that has gained traction. That his accusers are relying on a relatively obscure accusation — a distant echo of an antisemitic trope from the European Middle Ages — as the main ammunition against El-Kurd is raising questions among advocates for Palestinian rights about the responsibilities of Israel’s critics to have an almost-scholarly grasp of antisemitism and its history.

“I’m far more familiar with the history of antisemitism and the history of prejudice against Jewish people than I am about the history of prejudices against many, many other peoples because that is what is necessary to engage on this subject in the United States,” said Yousef Munayyer, a nonresident senior fellow at the Arab Center Washington. “At the same time, people who make arguments in favor of Israeli policies never seem to be subjected to the same minefield related to sensitivities over Palestinian history and suffering. That clear double standard is one the ADL seems dedicated to reinforcing.”

El-Kurd said he was unfazed by the flap over his language. “I’m not scared of the ADL or its predictable, racist smear campaigns,” he said. “It has no moral authority over me or any advocate of Palestinian liberation. I will not negotiate my vocabulary, let alone my character, with defenders of Zionism, colonialism, and apartheid. One look at the organization’s shameful history is enough to strip it of any legitimacy its deceptive name might offer it.”

An email obtained by The Intercept, signed by a group of Jewish students and faculty members at Georgetown, and addressed to the school administration, called for the school to condemn El-Kurd’s presence at the Tuesday event. The letter stated that his writing had used “a foul antisemitic trope, originating in the Middle Ages, that claims that Jews use the blood of gentiles for ritual or culinary purposes.”

The critical letter was followed by a statement supporting El-Kurd from a group of Georgetown Law alumni led by Palestinian American legal scholar Noura Erakat. El-Kurd’s supporters reviewed the blood libel accusation in the poem and rejected the charge, stating that “the literal interpretation of what is clearly figurative speech appears to be done in bad faith.”

The letter of support also argued that the controversy over the poem was changing the subject: discussions about Palestinians’ actual living conditions in the Occupied Territories were being supplanted by debates over wording. “The cause of Palestinian liberation is buried under bad faith interpretations of El-Kurd’s poetry. A single metaphorical line, subject to interpretation, becomes prioritized over the vile condition of Palestinian unfreedom,” it said.

El-Kurd told The Intercept that his poem was referring to the documented historical event in Israel-Palestine cited in the footnotes. He also said that as a teenager learning to write poetry, his teachers had encouraged him to use metaphorical language.

“It’s a metaphor, it’s not something I literally believe. I’m just now realizing that they actually think, or are pretending to think for purposes of exaggeration, that I actually believe Israelis eat Palestinian organs. At first it was comical, but now it seems very sinister,” El-Kurd said. “The line is about the practice of withholding Palestinian bodies and using them as bargaining chips and in the past, exploiting the bodies in ways that have been documented and are widely discussed. It’s not a conspiracy theory.”

He added, “At the time I wrote it, I was writing more literally about the practice of withholding bodies, but my teachers told me to make it more abstract and to use artistic language.”

El-Kurd said that the ADL never reached out or attempted to engage him about concerns that the group had with his writing. (The ADL did not respond to a request for comment.) Instead, with the dossier and the campaign to get his event at Georgetown canceled, the ADL has focused on trying to push him out of the public debate on Israel-Palestine entirely.

There’s no denying that El-Kurd grew up angry. A young Palestinian from the East Jerusalem neighborhood of Sheikh Jarrah, he has spent his entire life fighting against the Israeli government’s attempt to evict him and his neighbors from their homes.

When he was 11 years old, a group of hard-line Israeli settlers, including some with origins in the U.S., moved into a portion of his family home and tossed his family’s possessions into the street. The settlers have remained there ever since. To this day, they are pushing to evict his family entirely. His involvement on Israel-Palestine issues has been forced by circumstances that have shaped his life since childhood.

People who have worked in advocacy on Israel-Palestine also point out that it’s unreasonable to expect a 23-year-old to know how to navigate sophisticated speech codes around the conflict in the United States, or to immediately tar them as antisemites if they don’t.

“There are elaborate and ever-shifting speech codes that are constantly retrofitted to try and equate any form of Palestinian criticism of Zionism with antisemitism.”

“There are elaborate and ever-shifting speech codes that are constantly retrofitted to try and equate any form of Palestinian criticism of Zionism with antisemitism,” Munayyer said. “Those of us who operate in the American debate around this issue are forced to be very aware of the many ways that one’s legitimate criticism of Zionism can be misconstrued in bad faith as antisemitic speech.”

The ADL dossier that triggered the uproar against El-Kurd does acknowledge that “the Israeli-Palestinian conflict is intensely personal for El-Kurd” and that his family has been “entangled in a long-standing political and property dispute that has left them under threat of eviction by Israel for years.”

Under Greenblatt’s leadership, the ADL has taken liberal stances on some issues. The group has even taken steps to make amends for some past controversies: In 2021, Greenblatt issued a public apology for the ADL’s decision to oppose the construction of a mosque in Lower Manhattan, saying on behalf of the organization, “We were wrong, plain and simple.” Greenblatt has also stridently called out Donald Trump and the far right, something for which he has been attacked by conservatives.

The controversy over El-Kurd may make it harder for even a rebranded ADL to make new allies. Many progressives today are sympathetic to Palestinian suffering, and the knee-jerk attempt to “cancel” El-Kurd, including with a coordinated media blitz, is unlikely to endear them to the ADL.

For his part, El-Kurd says that the attacks on him, which characterize his expressions of outrage as bigotry, paint a one-sided picture that doesn’t reflect the real-world violence that he and his family suffer at the hands of the Israeli settler movement and the government that supports it.

“My family is threatened by expulsion every day, and all I’ve ever known is life under Israeli occupation,” El-Kurd said. “All I’ve known is tear gas and beatings and police abuse.”

Update: April 30, 2022
This story has been updated to include an additional quote from Mohammed El-Kurd.