Then-President Donald Trump wasn’t shy about his adoration for the man who painted a giant “Trump 2020” sign on his front lawn ahead of the last presidential election. “Thank you to J.R. Majewski, a great Air Force Veteran and Trump Supporter who did a beautiful job of turning his lawn into a giant Trump Sign. Thanks also to your fantastic Ohio neighbors. We are making record progress on JOBS, etc.,” Trump tweeted in July 2020. “Big Silent Majority!!!”

Majewski, of Port Clinton, Ohio, doubled down on his allegiance to Trump the following January, when he raised thousands of dollars to bring a group of people to Washington, D.C., to attend the “Stop the Steal” rally against certification of President Joe Biden’s election. (He told a local television station that he left before the attack on the Capitol began.) Eight months later, Majewski gave his lawn a new paint job — this time, a giant mural of Trump’s face. And he unveiled the new art under a new context: While he had rallied in January as a private Ohioan with no known political ambition, by September 2021 he had channeled his newfound recognition into a primary candidacy for a seat in the U.S. House of Representatives.

If Majewski mows his way through the GOP primary Tuesday, he’ll face off against Marcy Kaptur, D-Ohio, producing an unusual realignment election. The MAGA movement portrays itself as economically populist and culturally conservative — which also happens to describe Kaptur, the longest-serving woman in the House and one of the most outspoken advocates of workers in her almost 40 years in Congress.

Unlike Black Lives Matter protest gun-toter Mark McCloskey — who similarly leveraged his sudden conservative fame to launch a Missouri Senate campaign that’s gone nowhere — Majewski is gaining traction. Late last month, Trump gave him a glowing endorsement at an Ohio rally: “He’s been carving the name Trump on his farm and those planes would pass over that farm. You know who I’m talking about. And he’s a great guy and he’s in there fighting for whatever the hell he’s fighting for. I don’t care. I love him, J.R. Majewski.”

The former president is backing Majewski over experienced Republican competitors some of his party allies support. Theresa Gavarone, an Ohio state senator, was named a “woman to watch” by New York Rep. Elise Stefanik, the third-ranking Republican in the House. Craig Riedel, a state representative, boasts the endorsement of Rep. Jim Jordan, R-Ohio, the highest-ranking Republican on the House Judiciary Committee and a relentless Trump defender.

“Trump knows I’m a no bullshit guy. He knows I’m loyal to his efforts and sees the value of my energy background,” said Majewski, who presents himself as “a Senior Leader in the nuclear industry,” in a direct message on Twitter. (He told The Intercept he was a nuclear executive until recently but declined to specify for which company.) “My opponents are spineless they’ve proven that through their time in the legislature here in Ohio and they would rather kowtow to other Republicans than stand on the front lines.”

Whoever wins the GOP primary on Tuesday has a serious chance of heading to Congress. Ohio’s historically blue 9th Congressional District, which Kaptur has consistently won by at least 11 percentage points since her first election to the House in 1982, now leans slightly Republican thanks to redistricting by the state’s Republican legislators. Pollsters like the Cook Political Report and Inside Elections consider the race a toss-up. Ahead of the anticipated red wave this midterm season, the Democratic Congressional Campaign Committee added Kaptur to its list of front-line candidates.

Kaptur does currently have a significant monetary advantage, but that could change when Republican donors gather behind one candidate and the National Republican Congressional Committee throws in its resources. (The group already put the 9th District on its target list.) Federal Election Commission records show Kaptur has raised $974,000 this cycle and has nearly $1.4 million on hand. Among Republicans, Gavarone, Riedel, and Majewski have all raised less than $500,000 and have less than $100,000 on hand. 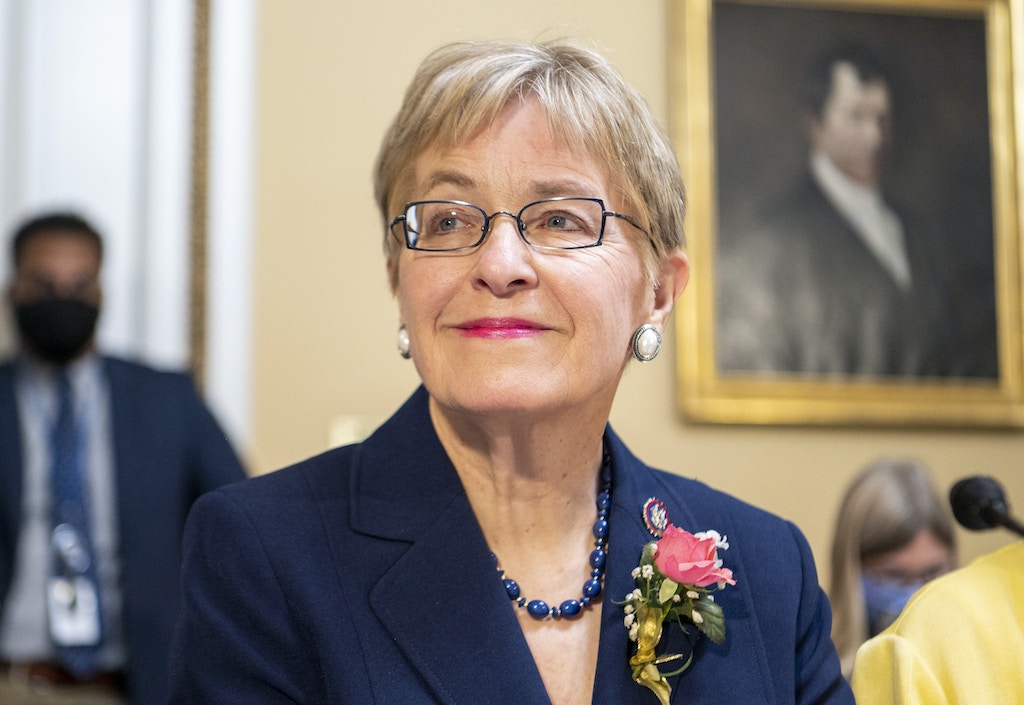 While redistricting drove many Democratic incumbents to retire or run for different seats, Kaptur is pressing on. “Joe Biden is the first president in my lifetime — and that’s one reason I’m running again, because I’m going to help Joe as much as I can — that sort of gets it,” she told NBC News in a January interview, referring to more economic populist values that animate the Midwest. At the time, Ohio legislators were finalizing her district’s new borders to favor the GOP. (The Ohio Supreme Court initially rejected the state’s new congressional map due to its overwhelming tilt; it has also tossed out maps for statewide office four times, an issue that remains unresolved.)

Despite Kaptur’s enthusiasm, Biden’s name hardly carries as much weight as Trump, who according to the New York Times, would’ve won the newly drawn 9th District by 3 points. And right-wing super PACs see her vulnerability. Historically, they haven’t bothered spending massive amounts of money to impact races against Kaptur; her district has been solidly blue throughout her nearly four decades in Congress. In a sign of new optimism, they’re all-in this year. Super PACs have spent nearly $1.4 million on independent advertising in the Republican primary — all during the month of April.

But the outside spending isn’t the classic story of political insiders rushing their resources to undermine a high-risk candidate in favor of a safe, establishment one. Drain the DC Swamp, a super PAC that backs far-right lawmakers like Reps. Marjorie Taylor Greene, R-Ga., and Lauren Boebert, R-Colo., has paid more than $210,000 to prop up Majewski’s campaign. The group is primarily funded by Colorado retiree Tatnall Hillman, whose fortune comes from the oil and gas industry.

In a sign of infighting within the more extreme, anti-establishment segment of the GOP, Drain the DC Swamp supports Jim Jordan but nevertheless has spent nearly $80,000 against his preferred candidate, Riedel (and the same amount against Gavarone too).

More traditional Republican megadonors, meanwhile, have gotten behind Gavarone. Winning for Women Action Fund, which aims to elect GOP women to Congress, endorsed Gavarone last month. Her race is one of only two in which the group is rolling out independent advertising; the other is Ohio’s Senate election, where it’s backing Jane Timken, former chair of the Ohio Republican Party.

But rather than targeting both Riedel and Majewski, Winning for Women Action Fund isn’t bothering wasting resources against the Trump-favored political outsider. Instead, it has spent nearly $480,000 solely against Riedel. It is bankrolled by a number of high-net financiers, including billionaire investment banker Warren Stephens, a prolific Arkansas-based right-wing donor who spent millions to oppose Trump’s candidacy in 2016. According to the massive ultra-wealthy tax document leak known as the Paradise Papers, Stephens also secretly co-owned a payday lender that was found to engage in predatory practices in a multimillion-dollar lawsuit brought by the Consumer Financial Protection Bureau.

Gavarone’s campaign is also getting outside support from a union-backed super PAC called Defending Main Street, which claims an “85%+ winning percentage”, according to its website. Its candidates “are committed to enacting common-sense, bipartisan legislation on kitchen-table issues such as health care, equal pay, childcare, education, clean water, and infrastructure,” the site says. Defending Main Street has spent nearly $200,000 to promote Gavarone’s candidacy.

And one dark-money group backed by secret donors — which appears linked to several other secretive PACs trying to influence Republican races nationwide — has made the Ohio GOP primary its target.

Northwest Ohio Freedom Fund has spent about $326,000 to oppose Gavarone — and no money on any other congressional race. According to FEC records, the fund is based in Alexandria, Virginia, and its treasurer, Dustin McIntyre, is affiliated with several other PACs. The filings list two email accounts, one of which bounced back a message from The Intercept, and another, affiliated with a firm called FEC Compliance Group, which did not respond to a request for comment.

Last month, the Michigan Campaign Finance Network, a nonprofit dedicated to exposing money in politics, reported that FEC Compliance Group is an adopted name for Ohio-based Clark Fork Group, LLC, a firm connected to political consultants Joel Riter and Tom Norris. Riter, a former aide to Republican Ohio Senate candidate Josh Mandel, and Norris are part of a dark-money network and have been called out in watchdog complaints to the FEC. Clark Fork Group did not reply to a request for comment.

As voters grapple with high gas prices and frustration with a perceived lack of progress from Democrats, super PACs are rushing massive sums to Republican primaries across the country — anticipating a common trend wherein first-term presidents’ parties often lose seats in Congress during the midterms.

In its own analysis of the upcoming Ohio race, the New York Times reported last week that Republicans may ultimately oust Kaptur thanks to shifting values in the 9th Congressional District. The incumbent’s friends in the labor movement, according to the story, have grown disillusioned with the environmentally conscious Democratic Party, and union membership has declined overall.

But it’s not just policy that determines election outcome. Money and personality are huge drivers of voter behavior, and there’s no shortage of either in this Ohio race.