Justice Democrats blamed pro-Israel super PACs run by DMFI and AIPAC for its decision to stay out of the rematch with Ohio Rep. Shontel Brown. 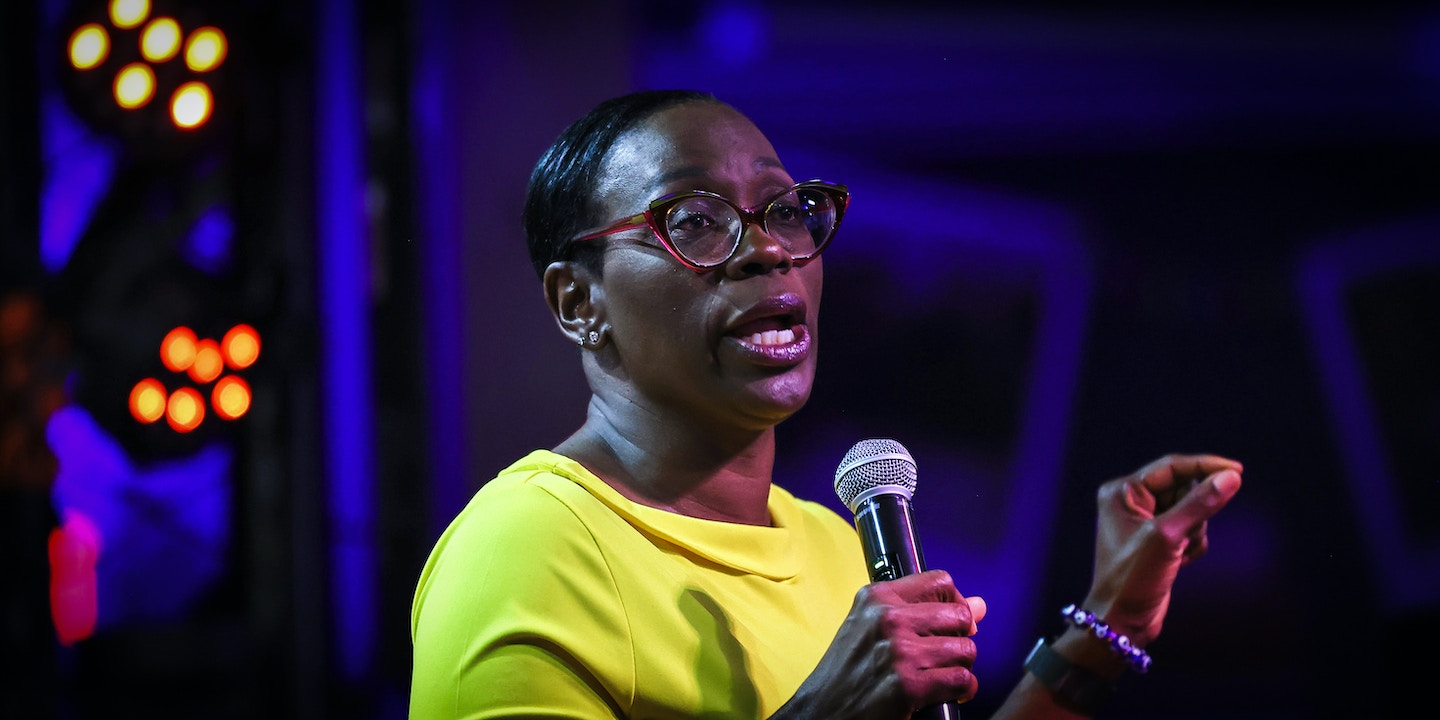 Justice Democrats, the group that has launched several progressive members of Congress, said it’s being “massively outgunned” by Republican donors giving millions to attack progressive candidates in several competitive races. One of those was Tuesday’s Democratic primary in Ohio’s 11th District, where incumbent Rep. Shontel Brown won with 66 percent of the vote. The defeat of Nina Turner, the former co-chair of Sen. Bernie Sanders’s 2020 presidential campaign, deals a repetitive blow to progressives who backed her run — the second Turner waged against Brown in nine months.

“Nina is a giant in the progressive movement and we’re proud to have gone all in for her campaign last year,” Justice Democrats said in a statement. “The reality is our organization has to be strategic about our priorities as we are getting massively outgunned by Republican donors funneling millions to SuperPACs like AIPAC [the American Israel Public Affairs Committee] and DMFI [Democratic Majority for Israel] against our existing candidates.”

Last August, Turner lost to Brown by six points in a special primary election. In the wake of that race, Turner told The Intercept that the result was heavily influenced by money from DMFI pouring in, especially after Israeli airstrikes in Gaza in May 2021. “I even have emails right now, to this day, of local, primarily business leaders in the Jewish community where they were encouraging Republicans to vote in this primary and were saying things like: We must support Shontel Brown, in no way can we let Nina Turner win this race,” she said.

A spokesperson for Justice Democrats told The Intercept that the group didn’t have the resources to get involved in every primary — particularly in light of major spending from Republicans and pro-Israel groups. “Each candidate we recruit requires massive staff and financial resources, especially since many of our candidates have little-to-no name recognition or existing fundraising networks. If we had twice the budget we could likely get involved in twice the number of primaries. When we endorse a candidate, we’re typically going all-in for them with significant staff and financial investment, which isn’t possible for us to do in every primary right now.”

Many progressives who backed Turner last year stayed out of the race this cycle, which picked up after many groups had already drawn up their electoral strategies and top priorities for the 2022 midterms. Another major diversion came from the Congressional Progressive Caucus PAC, which endorsed Turner last year, spent $104,000 on an independent expenditure supporting her, and last month endorsed Brown. After her first election to Congress, Brown became a simultaneous member of the CPC and the centrist New Democrat Coalition, raising eyebrows. Rep. Shontel Brown, D-Ohio, is seen in the U.S. Capitol after a group photo with the Congressional Black Caucus on April 6, 2022.

Several prominent CPC members who backed Turner’s race last cycle — including Chair Pramila Jayapal, D-Wash.; Whip Ilhan Omar, D-Minn.; Deputy Whip Cori Bush, D-Mo.; and Reps. Ayanna Pressley, D-Mass.; Rashida Tlaib, D-Mich.; Jamaal Bowman, D-N.Y.; and Mondaire Jones, D-N.Y. — did not make endorsements in the race this year. The caucus, which has endorsed more than 20 incumbents so far, is reportedly reviewing its endorsement process after backlash over its endorsement of Brown. Reached for comment by The Intercept, CPC PAC spokesperson Evan Brown said the committee doesn’t share information on endorsement votes. The PAC has become more active in contested primaries since it launched its first independent expenditure in 2020, when it helped Jones win his primary election against a field of better-funded candidates.

The race has been characterized by relative inaction by national figures on the left — either in spite or because of the coalescing of power and resources behind Brown by the Democratic establishment. House Speaker Nancy Pelosi, D-Calif., and President Joe Biden backed Brown, while Turner’s former boss, Sanders, endorsed the challenger. On Monday, just hours before polls opened, Rep. Alexandria Ocasio-Cortez, D-N.Y., backed Turner.

The Cleveland Democratic Socialists of America, which stayed out of the 2021 race, backed Turner’s campaign last month. Her campaign is also endorsed by the editorial board of Cleveland.com and the Plain Dealer, which backed her 2021 campaign as well.

Congressional Democrats are bracing for a tough upcoming midterm election cycle. Last month, the Cook Political Report released new ratings that showed Democrats slipping in eight House districts. Party leaders and several of the caucus’s moderate members have blamed progressives for alienating critical midterm voters and putting vulnerable front-line Democrats at risk, but those same moderates have also stymied action on the biggest chances for reform, frustrating organizers and voters and sending Biden’s approval numbers plummeting. In its endorsement last month, the editorial board of Cleveland.com and the Plain Dealer hinted at that dynamic and wrote that Turner was Cleveland’s best choice in light of “the strong possibility of a GOP takeover of the House.”

Update: May 4, 2022
The story has been updated with the final vote tally.