“Project Nimbus” would insulate the Israeli government’s cloud computing from political pressures stemming from the military occupation of Palestine. 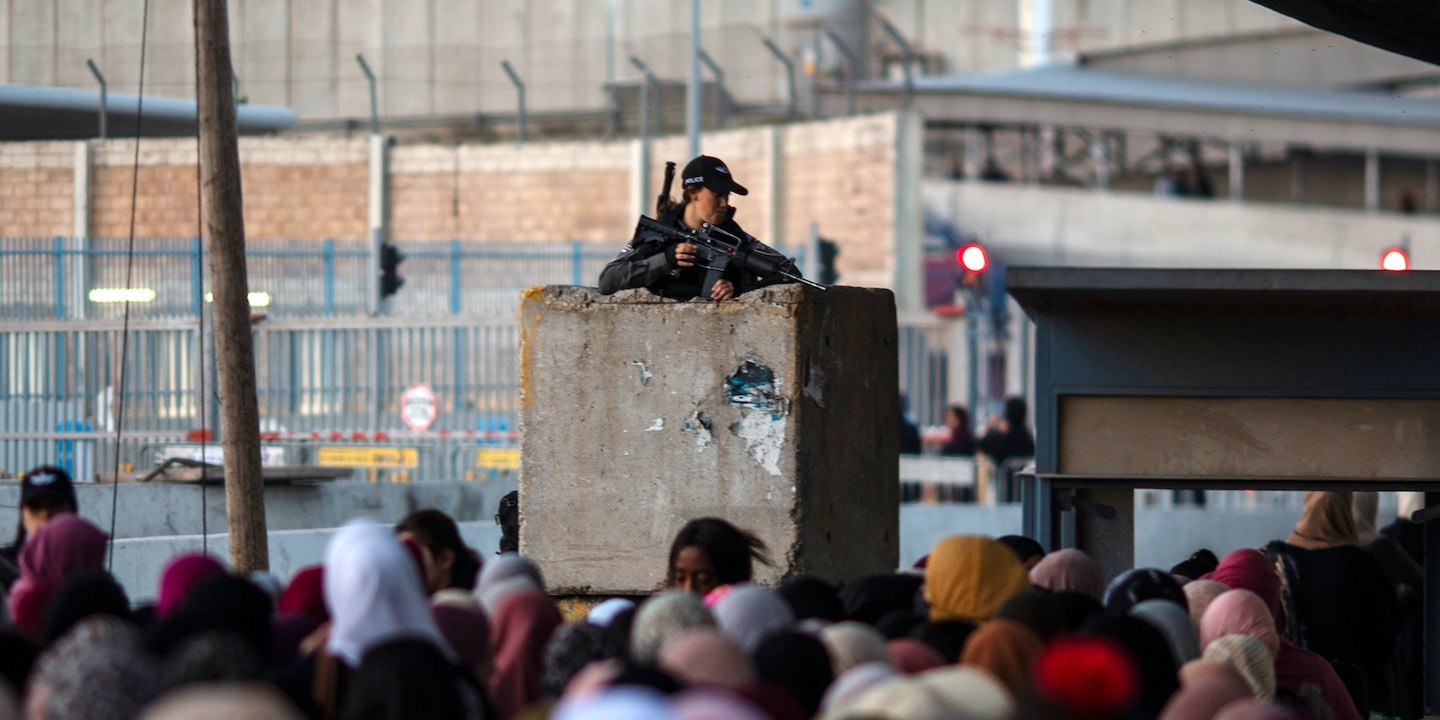 Google and Amazon are both set to help build “Project Nimbus,” a mammoth new cloud computing project for the Israeli government and military that is spurring intense dissent among employees and the public alike. Shareholders of both firms will soon vote on resolutions that would mandate reconsideration of a project they fear has grave human rights consequences.

Little is known of the plan, reportedly worth over $1 billion, beyond the fact that it would consolidate the Israeli government’s public sector cloud computing needs onto servers housed within the country’s borders and subject solely to Israeli law, rather than remote data centers distributed around the world. Part of the plan’s promise is that it would insulate Israel’s computing needs from threats of international boycotts, sanctions, or other political pressures stemming from the ongoing military occupation of Palestine; according to a Times of Israel report, the terms of the Project Nimbus contract prohibit both companies from shutting off service to the government, or from selectively excluding certain government offices from using the new domestic cloud.

It remains unclear what technologies exactly will be provided through Nimbus or to what end, an ambiguity critics say is unnerving. Google in particular is known for the sophistication of its cloud-based offerings that are perfectly suited for population-scale surveillance, including powerful image recognition technology that made the company initially so alluring to the Pentagon’s drone program. In 2020, The Intercept reported that Customs and Border Protection would use Google Cloud software to analyze video data from its controversial surveillance initiative along the U.S.-Mexico border.

While a wide variety of government ministries will make use of the new computing power and data storage, the fact that Google and Amazon may be directly bolstering the capabilities of the Israeli military and internal security services has generated alarm from both human rights observers and company engineers. In October 2021, The Guardian published a letter from a group of anonymous Google and Amazon employees objecting to their company’s participation. “This technology allows for further surveillance of and unlawful data collection on Palestinians, and facilitates expansion of Israel’s illegal settlements on Palestinian land,” the letter read. “We cannot look the other way, as the products we build are used to deny Palestinians their basic rights, force Palestinians out of their homes and attack Palestinians in the Gaza Strip — actions that have prompted war crime investigations by the international criminal court.” In March, an American Google employee who had helped organize the employee opposition to Nimbus said the company abruptly told her she could either move to Brazil or lose her job, a move she said was retaliation for her stance.

Nimbus will now face a referendum of sorts among Google and Amazon shareholders, who next month will vote on a pair of resolutions that call for company-funded reviews of their participation in that project and others that might harm human rights. The filers of the Google resolution collectively own roughly $1.8 million in shares, according to Ed Feigen, a Google shareholder since 2014 and lead filer of the resolution. While these investors object to Nimbus on largely the same moral grounds as the authors of the Guardian letter, they’re also tapping into the specific anxieties of the Wall Street investor: What if bad press from Project Nimbus loses us money? Citing the very public controversies surrounding Project Nimbus and other prior contracts with various governmental security agencies, the Google shareholder resolution warns that “employee and public opposition to such contracts will increase and pose a risk to Google’s reputation and its strategic positioning on social responsibility,” and asks that “the company issue a report, at reasonable expense and excluding proprietary information, reassessing the Company’s policies on support for military and militarized policing agency activities and their impacts on stakeholders, user communities, and the Company’s reputation and finances.”

The Amazon resolution, filed by Investor Advocates for Social Justice, also calls for an independent inquiry into Nimbus and other surveillance contracts, stating: “Amazon’s government and government-affiliated customers and suppliers with a history of rights-violating behavior pose risks to the company” and “Inadequate due diligence presents material privacy and data security risks, as well as legal, regulatory, and reputational risks.”

Feigen told The Intercept he and several fellow investors felt compelled to oppose Nimbus as soon as they learned of it. “I’m also a member of the organization Jewish Voice for Peace,” Feigen said, “which works to ensure US foreign policy advances peace, human rights, and follows international law so we can ensure freedom and justice for Palestinians.” Feigen added that the resolution was drafted in collaboration with Google employees who similarly oppose the contract on human rights grounds. “We also felt the need to support Google employees who’d spoken out against contracts Google was pursuing with militaries and police agencies like CBP and ICE,” Feigen said, “both because we believe that profiting from violence is plainly immoral, and because we see pursuing such contracts as a liability for investors––especially given the history of Google employees protesting such contracts.”

A Google software engineer who provided feedback for the resolution and spoke on the condition of anonymity told The Intercept that they’re concerned employees are just as much in the dark about Nimbus as the general public, and fear how the company’s technology would be used to repress Palestinians. “It became a point of shame,” they said in an interview. “We know that the IDF, one of its projects is mass constant surveillance of various areas of the Occupied Territories, and I don’t believe there are any restrictions on which cloud services the Israeli government wants to procure from [Google] Cloud. Google offers big data analysis, machine learning, and AI tool suites through Cloud; I don’t think there’s any reason to assume they aren’t consuming all of these products to help them work on this.”

“If workers are working on cloud AI products or large scale data management, they should think of themselves as working on technology that is oppressing people.”

This engineer added that while they have found like-minded colleagues who are similarly disturbed by the prospect of their cloud technologies being used to fortify the Israeli occupation, employee activism against Nimbus is much diminished since the waves of worker-led protests against prior Google contracts like Project Maven and Dragonfly, the company’s planned custom-built Chinese search engine. “Right now we’re kind of in a slump,” they said. While past employee movements spurred heated discussions on internal chat forums, they said, “We haven’t had anything like that from Nimbus, which is really unfortunate.” In addition to fearing retaliation from Google itself, this source said Google employees who might otherwise vocally oppose the Nimbus contract have remained quiet in order to avoid accusations of antisemitism. “The harm is documented, putting Palestinians under constant surveillance is very well documented, and yet [this contract] is the one where even if workers care about it, not only do they face retaliation from management, some coworkers might retaliate in their own ways.” Googlers could stand to think more about how their creations could be misused, they added: “If workers are working on cloud AI products or large scale data management, they should think of themselves as working on technology that is oppressing people.” But the engineer pointed to the fact that Google engineers likely trust the company’s vague public commitments to human rights values and “AI principles,” even if naively. “Leadership has failed to take these commitments seriously, so they’ve passed responsibility to ensure our technology is used responsibly on to us.”

As with most activist shareholder resolutions, these will likely be a difficult sell. Government contracts like Nimbus are enormously lucrative, and both Amazon and Google have made it clear they are continuing to seek them even in the face of protest from within and without. Global internet giants have seen their profits soar in recent years, a trend they hope to continue by taking on military and law enforcement work that in previous eras may have been handed to traditional defense contractors. It will be difficult to convince investors chiefly concerned with maximizing share prices that these firms should walk away from the giant payouts defense or national security-related projects would bring. Even if successful, neither resolution would end Project Nimbus or thwart either company’s involvement. The Google software engineer added that most of their fellow anti-Nimbus colleagues don’t believe the resolution goes far enough: “It calls for a report on potential impacts to be prepared, but otherwise does not propose any binding action.” Still, they hope that the resolution, doomed or not, will help draw scrutiny and public pressure to the project, a sentiment Feigen shares: “This is the first time a resolution like this has ever been introduced, so we know it’s a big challenge,” he said. “It’s still too early to know whether the resolution will pass, but whether it does or not, this is just the first step in calling attention to these important concerns.”

A previous version of this article stated that the shareholders behind both the Google and Amazon resolutions owned $1.8 million in shares collectively, however that figure represents only the shares held by the supporters of the Google resolution.