Johnson wanted to stop Americans from learning about Nixon’s Vietnam treason and his own lawless surveillance. 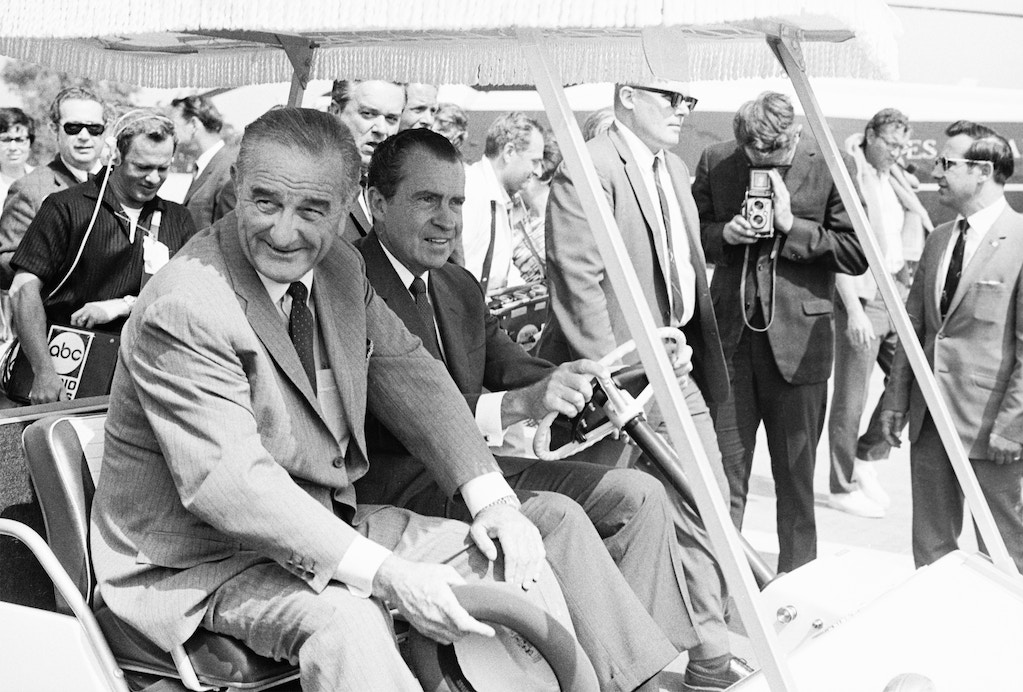 Former President Lyndon B. Johnson (left) and his successor, Richard Nixon, ride together to the so-called Western White House on Aug. 27, 1969.

The FBI’s search on Monday of former President Donald Trump’s Mar-a-Lago home has rightfully been huge news. According to the Washington Post, the FBI took action because Trump had left the White House in January 2021 with government documents, and while Trump returned 15 boxes of items to the National Archives earlier this year, officials had come to believe that “either the former president or people close to him held on to key records.” Following the recent search, the FBI took away another 12 boxes of material.

Remarkably, however, none of the voluminous news coverage about this has mentioned a parallel to Trump’s behavior: When Lyndon B. Johnson’s presidency ended in 1969 and he was replaced by Richard Nixon, Johnson ordered an underling to surreptitiously take highly classified material with him on his administration’s exit.

The silence about this may be because the whole episode makes both political parties look horrendous. Democrats appear as feckless cowards who believed that Americans couldn’t handle the truth about their own country. Republicans seem to be criminals and quasi-traitors who were happy to see tens of thousands of American soldiers die if it suited their purposes.

The story dates back to the 1968 presidential campaign. The GOP nominee was Nixon, who had served as Dwight Eisenhower’s vice president. The Democratic candidate was Hubert Humphrey, Johnson’s vice president.

By that time, about 30,000 Americans had been killed in the Vietnam War. Hundreds of thousands of Vietnamese were dead. Anti-war protests in the U.S. and across the world were intense, and polls showed that a majority of Americans had come to believe sending troops to Vietnam had been a mistake. The war was a key factor in Johnson’s decision not to run again.

However, as the November 5 election drew closer, Johnson believed that there was a significant chance to reach an agreement to end the war on terms acceptable to the U.S. Johnson also knew that any signs of momentum toward such an agreement would boost Humphrey’s chances of winning.

Nixon was, of course, also well aware of this. We now know that Anna Chennault, a top GOP fundraiser and head of “Republican Women for Nixon,” had been in touch since at least August with the South Vietnamese government, urging it not to go along with any peace efforts.

On October 22, 1968, top Nixon aide H.R. Haldeman jotted down orders from Nixon. “! Keep Anna Chennault working,” Haldeman wrote. “Any other way to monkey wrench it? Anything RN can do.”

Johnson’s national security adviser, Walt Rostow, received a tip about the Republican meddling from his brother Eugene on October 29. A Wall Street friend, Eugene Rostow reported, had told him that Nixon’s efforts had been discussed at a luncheon for bankers that included an unnamed financial figure close to Nixon. “The prospects for a bombing halt or a cease-fire were dim,” the figure said, “because Nixon was playing the problem … to block.” In what would seem to confirm every left-wing belief about how the world works, the bankers, in possession of this tip that Nixon was preventing an outbreak of peace, held a “professional discussion” about how the situation would “affect the stock market and the bond market.”

In response, Johnson ordered his factotums to have the FBI monitor Americans in contact with the South Vietnamese Embassy in Washington, D.C. The next day, October 30, the FBI told the White House that its wiretap revealed that Chennault had spoken with the South Vietnamese ambassador, who told her that something “was cooking” but asked her to come by the embassy because he wisely didn’t want to speak about it on the phone. Chennault said that she would visit after a lunch for “Mrs. Agnew,” the wife of Nixon’s running mate, Spiro Agnew.

“The prospects for a bombing halt or a cease-fire were dim, because Nixon was playing the problem … to block.”

On November 2, the FBI further reported to the White House that Chennault had contacted the South Vietnamese ambassador with a message from “her boss”: “Hold on, we’re going to win.” The bureau then said that Chennault had left Washington for New York and that it would “undertake discreet surveillance” while she was there.

The question for Johnson then became what his administration should do in response. On November 4, he spoke with national security adviser Rostow, Defense Secretary Clark Clifford, and Secretary of State Dean Rusk. They all agreed that they should take no action at all.

Why? Because, as Clifford argued, “some elements of the story are so shocking in their nature that I’m wondering whether it would be good for the country to disclose the story and then possibly have [Nixon] elected. It could cast his whole administration under such doubt that I would think it would be inimical to our country’s interests.” Johnson responded: “I have no doubt about that.” (You can read the entire conversation and even listen to the scratchy recording of it here.)

The next day, Nixon was indeed elected president. He barely beat Humphrey in the popular vote, 31.8 million to 31.3 million, a margin of 0.7 percent of the total votes cast. A few days later, the FBI sent the Johnson administration a memo describing a meeting between an informant and a South Vietnamese military attaché at the embassy in D.C. The attaché had said that the goal of “Saigon was to help presidential candidate Nixon, and that had Saigon gone to the conference table, presidential candidate Humphrey would probably have won.”

Nixon was inaugurated on January 20, 1969, and moved into the White House. But before Johnson vacated the premises, Rostow, at Johnson’s request, gathered up the incendiary documentation of Nixon’s treachery and how it had been proved by surveillance of Americans ordered by the president himself. Then Rostow walked out the door with it. Johnson, he later wrote, “asked me to hold [it] personally.”

What the Johnson administration had done was, in a sense, “legal,” given that there were essentially no laws governing the U.S. surveillance state before reforms in the 1970s. Nevertheless, everyone involved was aware that what they’d done could be seen as scandalous. On the November 4 phone call, Rusk said that revealing the fruits of the FBI’s spying “would be very unwise. I mean, we get a lot of information through these special channels that we don’t make public. I mean, for example, some of the malfeasances of senators and congressmen. … I think that we must continue to respect the classification of that kind of material.”

The Vietnam War eventually ended in 1975, essentially on the same terms as had been available in 1968. Tens of thousands more Americans died, as did a far higher, uncountable number of Vietnamese. During this time, the war further metastasized to Cambodia, where the Nixon administration ramped up a bombing campaign that dropped 2.7 million tons of ordnance on that poor, rural society. This was more than the 2 million tons of bombs the U.S. had used during all of World War II. The extraordinary devastation plausibly led to the rise of the Khmer Rouge and the subsequent Cambodian genocide.

That’s the downside. The upside is that Nixon got to be president, and Americans’ innocence about how politics works was preserved.

After Johnson’s death, Rostow put his documents in a sealed envelope and gave them to the Lyndon B. Johnson Presidential Library in Austin, Texas, with instructions that the envelope was to be opened “not earlier than fifty (50) years from this date June 26, 1973.” In other words, if Rostow had gotten his way, we would only be finding out about this conspiracy next year, in 2023, or even later. Rostow told the library that if it felt 2023 was too hasty, it should “re-close the file for another fifty years.”

Fortunately, the library opened the envelope in the 1990s, although some of the material has yet to be declassified. Nixon lied about what he’d done over and over again until his death in 1994, with many partisans deriding the facts as a preposterous conspiracy theory. It was only in 2016 that Nixon’s direct involvement was finally proved beyond a doubt.

It seems unlikely that the public records Trump took with him on his way out the door could be as momentous as those Johnson tried to excise from history. But given the degree to which U.S. presidents are willing to deceive us, we shouldn’t count anything out just yet.