A Philadelphia woman shared her very real grief about gun violence with Oz, but reporters were kept in the dark about the fact that she was a paid campaign aide. 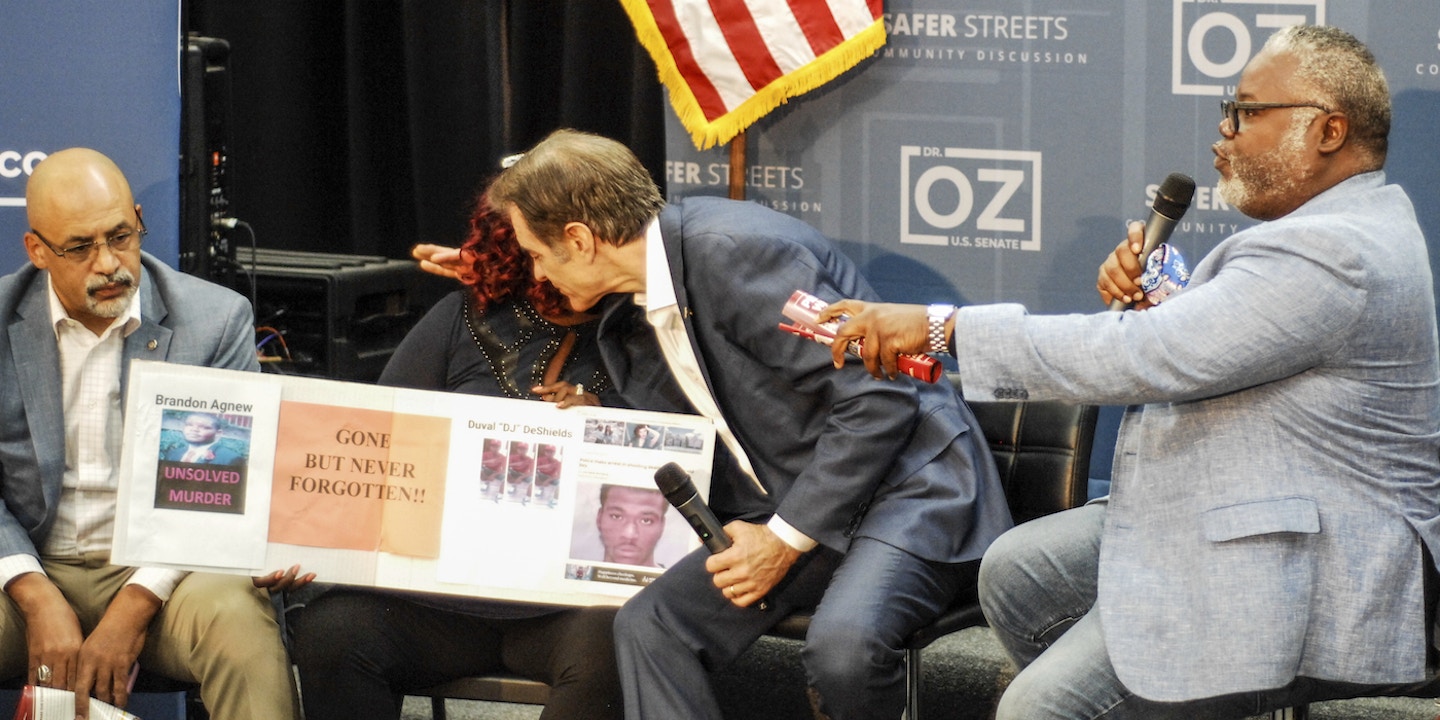 A touching moment at a recent campaign event for Dr. Mehmet Oz in Philadelphia — in which a Black woman broke down in tears as she described the fatal shootings of her brother and nephew, and was comforted by the Republican Senate candidate — made for riveting television, and brought to mind the former daytime TV host’s old namesake show.

Three weeks later, after the encounter was featured in local and national news reports, journalists who covered the event discovered that they had been duped by the Oz campaign into reporting as news a scene that had more in common with reality TV.

The woman, Sheila Armstrong, sat next to Oz at a September 19 event his campaign described as a “community discussion” in Philadelphia’s Germantown neighborhood. Armstrong held a handmade sign which said that her lost relatives were “gone but not forgotten,” and her anguished tears were broadcast to the city that day by the local NBC News affiliate, and described in reports on the event by the Philadelphia Inquirer and KYW Newsradio.

Sheila Armstrong tells Oz about her nephew and brother who were shot and killed in Philly. She says she’s “fed up with the system that’s playing politics with the lives of people in this community.” That’s Democratic state Rep. Chris Rabb seated next to her. pic.twitter.com/WWFf4nGfXj

The emotional encounter between the candidate and a victim of gun violence who had suffered so deeply was brought to national attention this week by The Associated Press, in a feature story on the competition over Black voters in the Pennsylvania Senate race between Oz and his Democratic opponent, John Fetterman, the state’s lieutenant governor. When the AP story was first published on Tuesday, it began this way:

As Sheila Armstrong grew emotional in recounting how her brother and nephew were killed in Philadelphia, Dr. Mehmet Oz — sitting next to her inside a Black church, their chairs arranged a bit like his former daytime TV show set — placed a comforting hand on her shoulder.

That text account — in a piece looking at the Oz’s campaign’s effort to connect with Black voters as an allied Republican group worked to cast Fetterman as an anti-Black racist — was posted on the AP’s website, and distributed to the hundreds of news organizations that reprint AP reporting, accompanied by a photograph of Armstrong drying her tears as Oz leaned in to hug her. Mehmet Oz, the Republican Senate candidate in Pennsylvania, comforted Sheila Armstrong, who lost two relatives to gun violence, after she spoke at an event staged by his campaign in the Germantown section of Philadelphia on Sept. 19, 2022.

As the text and photo accounts of the exchange between Oz and Armstrong were reproduced by news organizations across the country that subscribe to the AP’s wire service, Fetterman’s campaign manager, Brendan McPhillips, complained on Twitter that the AP had failed to share a pertinent fact with readers: that Armstrong is not an ordinary voter but a paid member of the Oz campaign staff.

As evidence, McPhillips posted a screenshot of a business card Armstrong had shared on her public Instagram account in June, identifying her as the Oz campaign’s “Philadelphia County Coordinator,” above a “doctorozforsenate.com” email address.

Armstrong’s Instagram feed also includes posts from June and July promoting other campaign events in Philadelphia, illustrated by a photo of her smiling with the candidate, and one from September, in which she invited anyone who wanted to attend the “Safer Streets Community Discussion” with Oz on September 19 to RSVP, by emailing her at her campaign account. The flyer for the event Armstrong posted on Instagram made it clear that the location of the event would not be made public to anyone who did not email her.

Records filed with the Federal Election Commission in June show that two payments to Armstrong that month from the Doctor Oz for Senate campaign were described as “payroll.”

None of the local news reports on the event that were published last month informed the public that Armstrong worked for the Oz campaign.

While Armstrong has clearly suffered greatly from the unchecked epidemic of gun violence in America, it appears that the Oz campaign misled reporters who attended the invitation-only discussion where she was a featured speaker by failing to disclose her affiliation with the campaign. None of the local news reports on the event that were published last month informed the public that Armstrong worked for the Oz campaign.

Although the AP updated the text of its report to add a reference to Armstrong’s employment, after the Fetterman campaign raised the issue, it seems clear that the news organization only became aware of her status after publication. “As soon as AP learned of Armstrong’s campaign affiliation and confirmed it, we updated our story,” a spokesperson for the news organization told me in an email.

In a phone interview on Thursday, Ryan Collerd, the freelance photojournalist who took the photograph of Oz comforting Armstrong on assignment for the AP, told me that he had no idea that she was affiliated with the campaign until I called him. “She was not presented, in my recollection, as anything other than a grieving family member,” Collerd said.

Armstrong and the Oz campaign’s communications director, Brittany Yanick, did not respond to questions about whether the campaign deliberately withheld her role with the campaign from journalists.

Chris Rabb — a Democratic state representative who said he forced his way into the event in his community without an invitation “in protest,” and took a seat next to Armstrong — shared a photograph on Twitter that seemed to show that reporters in the room nearly outnumbered the dozen invited guests who took part in the discussion.

Literally half of the dozen folks at this fake town hall were featured on #DocHollywood’s campaign pamphlet that I tore up in front of the cameras before I left.

Let’s see what news outlets will release that footage.

I was neither invited, nor welcomed to this #traumaporn. pic.twitter.com/2OEgHzhvi9

Rabb also claimed that some of the participants in the photo-op had previously been photographed by the Oz campaign for a flyer promoting his candidacy that was handed out at the event. While that flyer does not appear to be available online, a campaign commercial for Oz that was filmed that day and released two weeks later did feature video of him speaking to at least two of the participants in the Philadelphia event, including Armstrong, who was shown touring the neighborhood with him, arm in arm. 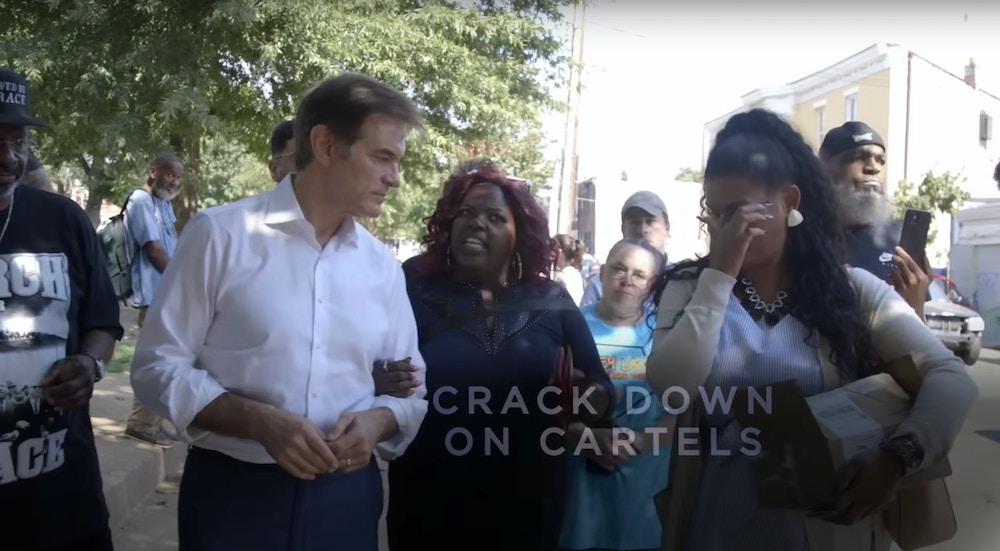 A screenshot from a campaign ad recorded in Philadelphia on Sept. 19, 2022, showed Mehmet Oz walking arm-in-arm with Sheila Armstrong, a paid campaign aide.

Cory Clark, a photojournalist and writer who covered the event for The Local, a Northwest Philadelphia newspaper, told me in an email that Armstrong’s affiliation with the campaign was not revealed to reporters who attended what he pointedly called “a closed-door community discussion.”

Clark’s report on the event also included video of a confrontation between Armstrong and pro-choice Fetterman supporters outside the storefront church where the event she organized for Oz took place.

A Fetterman campaign official described Armstrong’s claim as false, telling me in an email, “we were never invited to this event.”

There is nothing new about a political campaign carefully stage-managing a public event to get good publicity or using the news media to broadcast a favorable message to the public. But by inviting reporters to cover a community discussion with Oz and not revealing that a featured speaker, Armstrong, was a paid staffer, the former TV host’s aides seem to have successfully tricked reporters into presenting a staged, reality TV scene as if it were news.

What’s more, despite Armstrong’s suggestion that the whole point of the event was to discuss gun violence, the four-part plan to “fight for Black communities” Oz unveiled during his visit to Philadelphia that day made no mention of any measures to take guns off the city’s streets.

In fact, the candidate’s campaign website boasts that Oz is “a proud gun-owner” and “a firm believer in the Second Amendment and our constitutional right to bear arms for protection.”

A screenshot from a campaign ad for Mehmet Oz in which the candidate describes himself as a defender of Pennsylvanian gun owners’s “constitutional right to protect ourselves from intruders or an overly intrusive government.”

The text under a video that shows Oz firing a variety of weapons, and loading a rifle, states his position clearly: “He opposes anti-gun measures like red flag laws and liberal gun grabs.”

But when Lauren Mayk, a reporter for the local NBC News affiliate in Philadelphia, asked Oz if he would oppose any new restrictions on guns as a senator, the candidate — who had been photographed after his event giving Armstrong another warm hug — dodged the question and quickly changed the subject.

Oz held another campaign event on Thursday, also called a community discussion about safer streets, this time in South Philadelphia. Photographs of the event posted online by the candidate, and in the Getty archive, appear to show that at least three of the men who took part in the discussion with the community in Northwest Philadelphia last month were also present at the event on Thursday in a different part of the city.

I enjoyed our Safer Streets Community Discussion today in Philly with my friend @McSwainPA. These discussions are important because of the radical efforts by John Fetterman to decriminalize heroin and put heroin injection sites in our neighborhoods - and we can't let that happen. pic.twitter.com/LfN0hjEb8i

Two of the men wore the same hats at both events. One man, who wore an orange camouflage cap, was also featured in the Oz campaign commercial filmed on September 19. The other man, in a red NASA cap, praised Oz at the first one as someone “who cares.” The third man, Isaac “Ikey Raw” Gardner, a North Philadelphia community activist, appeared in news photographs of both events, and posted comments and video on social media to document his presence.

After this article was published, an editor’s note was added to the September 19 Philadelphia Inquirer report on the Oz campaign event that day, explaining that the report “has been updated to include Sheila Armstrong’s paid role in Mehmet Oz’s Senate campaign.” Julia Terruso, the Inquirer reporter who was in the room for the event, reported that the Oz campaign told The Inquirer this week that Armstrong is Oz’s Philadelphia regional director, working on African American outreach.