Every state with abortion on the ballot saw decisive action to protect reproductive rights. 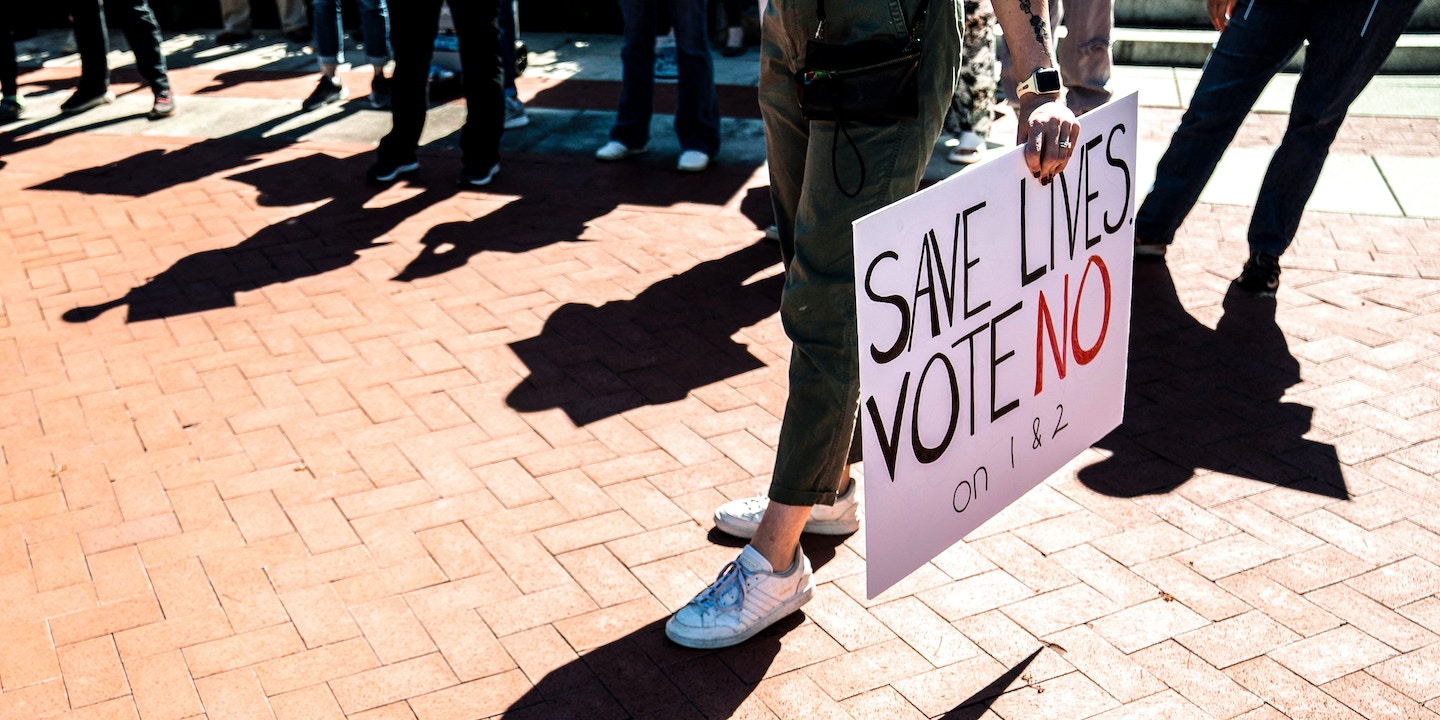 Voters in Kentucky rejected a constitutional amendment that would have vested the state General Assembly with the sole power to decide whether residents enjoy any right to reproductive autonomy. “It was a very eventful evening,” said Rachel Sweet, campaign manager of Protect Kentucky Access, which rallied voters across the state to vote no on the proposed amendment. “This is a historic victory for women in the commonwealth,” Sweet said. “Their constitutional rights to make their own medical decisions have been protected.” Still, she added, “we know this work is not over.”

Known as Amendment 2, the ballot measure would have added language to the Kentucky Constitution to say that nothing in the document could be interpreted to protect a right to abortion. The commonwealth’s constitution contains broad rights of privacy and self-determination; a vote in favor of the amendment would have carved out an exception to those rights, barring any court from even considering the constitutionality of abortion, let alone concluding that it is protected. Although abortion is currently banned in Kentucky, voters’ rejection of the amendment means that a lawsuit challenging various statewide restrictions will be able to move forward. While simply defeating Amendment 2 “will not restore access to legal abortion in Kentucky overnight,” Sweet said, “it is an important step in continuing the legal fight.”

In the wake of the U.S. Supreme Court’s opinion in Dobbs v. Jackson Women’s Health Organization, which stripped abortion rights from the federal Constitution, six states, including Kentucky, put questions about reproductive rights up for statewide voter consideration. In each case, voters sided in favor of protecting reproductive rights.

In August, voters in Kansas roundly rejected a constitutional amendment similar to the measure on the Kentucky ballot. On Tuesday, voters in California approved a constitutional measure protecting the right to abortion and the right to choose, or refuse, contraceptives. Michigan voters decisively approved a measure that would add the “fundamental right to reproductive freedom” to the state’s constitution. Vermont voters overwhelmingly passed similar protections, while Montana voters rejected the so-called born-alive ballot initiative, which purported to protect infants born after failed abortions The Montana measure relied on fear-mongering language lacking scientific support and had the state’s medical community ringing alarms over its potential consequences.

“Across the country, voters made it clear that they will not stand for politicians trying to control their lives and decisions,” Morgan Hopkins, president of All Above All, said in a statement. “It is undeniable that the issue of abortion access was not only important in this election, but is vital to voters across the country.”

Defeat of the Kentucky amendment is particularly consequential. Beginning in 2019, the commonwealth’s General Assembly, which lurched to the right in 2016 and gave Republicans control of both the legislature and governor’s office, began passing restrictions on abortion in earnest, including a six-week abortion ban and a trigger law that would ban all abortion should the U.S. Supreme Court overturn abortion rights. When the Supreme Court did so in June, those bans took effect. Planned Parenthood and the American Civil Liberties Union sued to block the measures as unlawful under the Kentucky Constitution. On November 15, the state Supreme Court is slated to consider whether the bans should be blocked while the lawsuit moves forward. Had the amendment passed, there would have been little recourse to challenge the legality of the bans.

During a Wednesday morning press conference, Sweet said that defeating the Kentucky amendment was “a repudiation of the extreme anti-choice agenda” of the General Assembly “that is out-of-step with most voters’ values and beliefs.” While supporters of the amendment carped that the vote no campaign was being led by big out-of-state groups and money, Sweet said the reality was “hundreds if not thousands of Kentuckians working together to stand up to the politicians and special interests that put their freedom at risk.”

Members of the Protect Kentucky Access coalition — led by Planned Parenthood Alliance Advocates, the ACLU of Kentucky, Sister Song, Granny’s Birth Initiative, Kentucky Health Justice Network, Fairness Campaign, and Kentucky Religious Coalition for Reproductive Choice, along with more than 20 partner organizations based in the commonwealth — mobilized volunteers in 99 of Kentucky’s 120 counties and communicated with more than 600,000 voters as part of their campaign.

While complete voting data isn’t yet available, Sweet said the information that is available strongly suggests that voters across the political spectrum voted no on the amendment. She compared the outcome of Amendment 2, which failed with roughly 52 percent voting no, to Kentucky’s U.S. Senate race, which saw Rand Paul handily reelected with roughly 62 percent of the vote. Well over 150,000 more votes were cast against Amendment 2 than in support of Rand’s challenger, Democrat Charles Booker, a former member of the Kentucky House. “It is very clear that we would not have the lead that we do without a sizable number of votes from Republicans and independent voters,” Sweet said. She thinks the election results send a message to Kentucky lawmakers “that they do not have carte blanche to pass whatever extreme abortion restrictions they choose.”

Jackie McGranahan, a policy strategist with the ACLU of Kentucky, echoed Sweet’s takeaway. “The people of Kentucky have definitely spoken, and their answer is no,” she said. “No to extremist politicians banning abortion and no to political involvement in private medical decisions.” And while the vote hasn’t lifted the bans on abortion, it has kept the constitution’s “very strong” privacy protections intact. She said the ACLU is looking forward to arguments before the Kentucky Supreme Court, which could restore abortion access at the state’s two clinics if the court decides to block the bans while the suit moves forward. Meanwhile, McGranahan said, coalition members will continue working at the legislature to push for equitable access to health care and improvements to Kentucky’s “dismal” maternal health outcomes; the state’s maternal mortality rate is among the highest in the country and particularly troubling for residents of color, who face much steeper mortality rates than their white peers.

“But we are very hopeful. This is one step in a long journey,” McGranahan said. “And today we can be happy.”