Democrats fear the committee on “Weaponization of the Federal Government” will become a partisan cudgel. 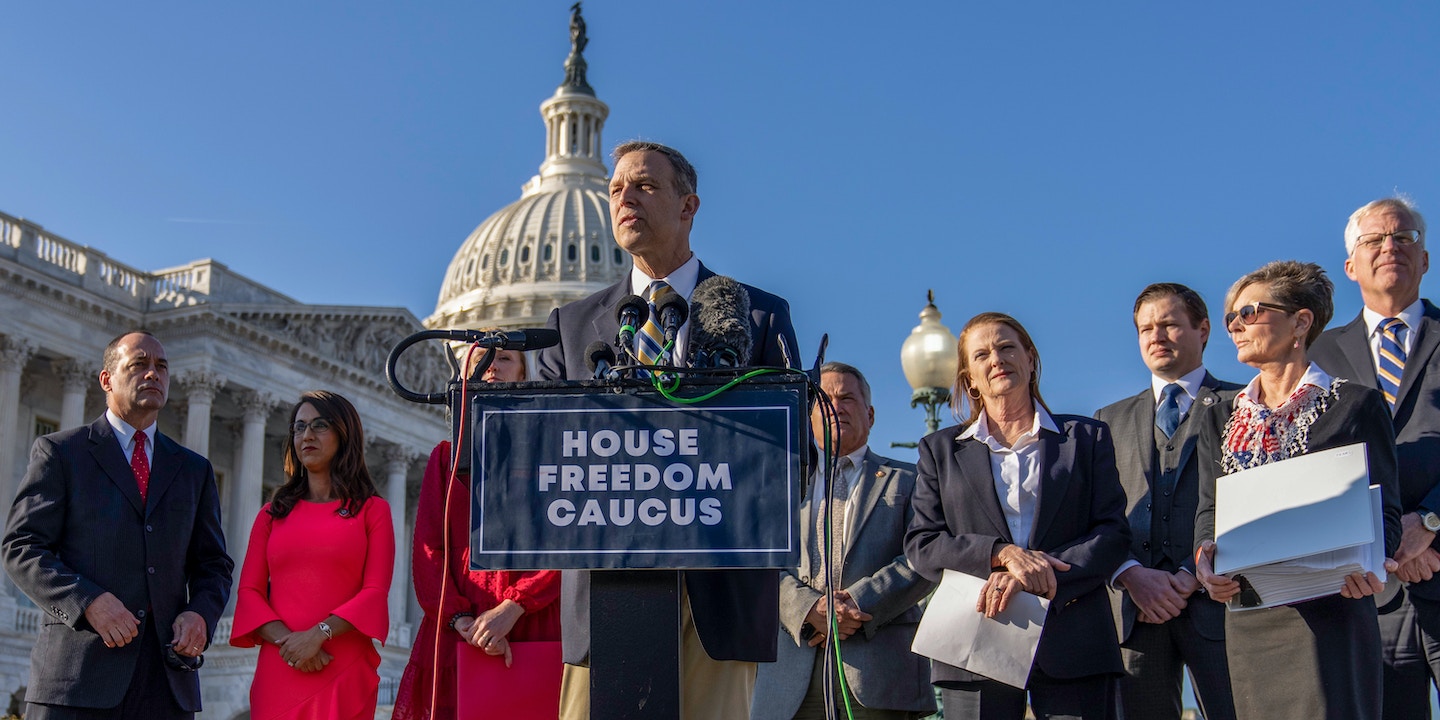 In the proposed rules package for the new 118th Congress, the Republican Party wants to create a subcommittee to investigate law enforcement and surveillance agencies.

The pledge to form the new committee on the “Weaponization of the Federal Government” is one of the concessions the far-right Freedom Caucus is demanding of Rep. Kevin McCarthy, R-Calif., in exchange for supporting his bid to become speaker of the House. Rep. Marjorie Taylor Greene, R-Ga., has cited it as a reason to support McCarthy.

Freedom Caucus members routinely rail against the FBI’s investigations of President Donald Trump and excessive domestic surveillance. The “Weaponization of the Federal Government” committee would give them power to investigate the purported abuses under the auspices of the Judiciary Committee. Freedom Caucus members said they want to model the new body after the Church Committee that ran investigations into intelligence abuses in the mid-1970s, leading to significant reforms.

Democratic members of the House were quick to condemn the comparison of the “Weaponization” subcommittee with the legacy of Sen. Frank Church, the Idaho Democrat who led on intelligence reforms. Rep. Ro Khanna, D-Calif., who lauded the original Church Committee, warned that the rebranded one could be a distraction from passing bipartisan legislation to rein in the very agencies Republicans are probing.

“To compare these is a total misunderstanding of what the Church Committee did,” Khanna told The Intercept. “The question is, if we are going to focus on making sure the government isn’t engaged in surveillance, we should be engaged in passing the Internet Bill of Rights and engaged in passing legislation that will prevent that surveillance. I don’t want a committee that will start casting political aspersions on law enforcement agencies.”

“I don’t think there is any potential merit because it’s already tainted.”

There will be little Democratic buy-in for the panel, according to interviews with minority party members, who cast the committee as one interested merely in embarrassing Democrats. “I don’t think there is any potential merit because it’s already tainted,” said Rep. Raul Grijalva, D-Ariz. “The preface to this has been all the comments the Republican majority in the House have made relative to the FBI, relative to spying on Trump, relative to going through our mail and conspiracy theories. It’s already tainted. It has no value. It’s not a Church commission. It’s more of a McCarthy commission” — a reference to the notorious, and notoriously overzealous, investigations into communists run by Sen. Joseph McCarthy in the 1950s.

The proposed committee would effectively investigate the “deep state,” a term popularized by Trump devotees to refer to machinations of unelected security apparatuses, though the phrase traces its roots to left-wing civil liberties advocates, suggesting at least the potential for some trans-ideological collaboration. Republicans were once closely aligned with the FBI but many turned against the federal law enforcement agency following its investigation into collusion between Russia and Trump’s 2020 campaign. In August, dozens of federal agents raided Trump’s Mar-a-Lago estate and recovered classified documents taken from the White House. The former president and his supporters in Congress were enraged. In recent months, GOP lawmakers have also called for investigations into the FBI’s role in shaping social media discourse around revelations concerning Hunter Biden.

The outgoing chair of the Rules Committee, Rep. Jim McGovern, D-Mass., echoed the condemnation of comparisons between the new proposed committee and historical reform efforts: “I think it’s insulting to the Church Committee to compare this to that.”

The Church Committee oversaw sweeping investigations into agencies with vast surveillance powers including the CIA and FBI. The precursor to the Senate Select Committee on Intelligence, the Church Committee, along with its House counterpart the Pike Committee, helped bring to light LSD experiments, propaganda campaigns overseen by the CIA against unwitting U.S. citizens, widespread domestic phone surveillance, and assassination plots against foreign leaders.

Despite Democrats’ skepticism toward the “weaponization” committee, there are dozens of oversight issues where they could find common cause with Republicans. Sen. Chuck Grassley, R-Iowa, recently revealed revelations about the FBI’s mishandling of hundreds of sexual harassment complaints against employees. In October, The Intercept reported that the Department of Homeland Security’s efforts to combat “disinformation” could potentially lead to influencing news stories unfavorable to the agency by affecting their distribution.

Rep. Lauren Boebert, R-Colo., one of the House GOP members holding out for concessions from McCarthy, refused three attempts for comment, despite her fellow Freedom Caucus members’ eagerness to see the committee formed.

“We’ve got a lot of oversight to do, and I think there will be a lot of committees involved,” said Rep. Matt Gaetz, R-Fla., one of the most outspoken members challenging McCarthy for concessions. “This is probably a longer discussion. In the course of a hallway discussion, I’m not sure I can break down the finer points.” On Tuesday morning, McCarthy said that his opponents had demanded to lead the upcoming committee.

Greene, a Freedom Caucus member friendly to McCarthy’s bid, was focused on the sole issue of securing her preferred speaker’s leadership position. “I’m so excited about all those things, but we can’t do them until 19 people decide to vote for Kevin McCarthy,” she said.

Rep. Mike Quigley, D-Ill., a long-standing member of the House Intelligence Committee, cast doubt on the prospects for bipartisanship on the “Weaponization” committee. “It’s an indication that this isn’t going to be about accomplishing anything,” he said of the Republicans’ apparent partisanship. “I would predict there will be double-digit select committees and special new subs on existing committees. This is all about attacking and going on the offense and very little about what bills are we going to pass.”

Quigley suggested that the “Weaponization” committee would set up a formal structure for the Republican Party’s right flank to air its worst conspiratorial views. Quoting the late writer Hunter S. Thompson, Quigley joked, “When the going gets weird, the weird turn pro.”