From 2009 to 2012, the Obama administration went to extraordinary lengths to keep a single short phrase, describing President Bush’s authorization of the torture program, secret. 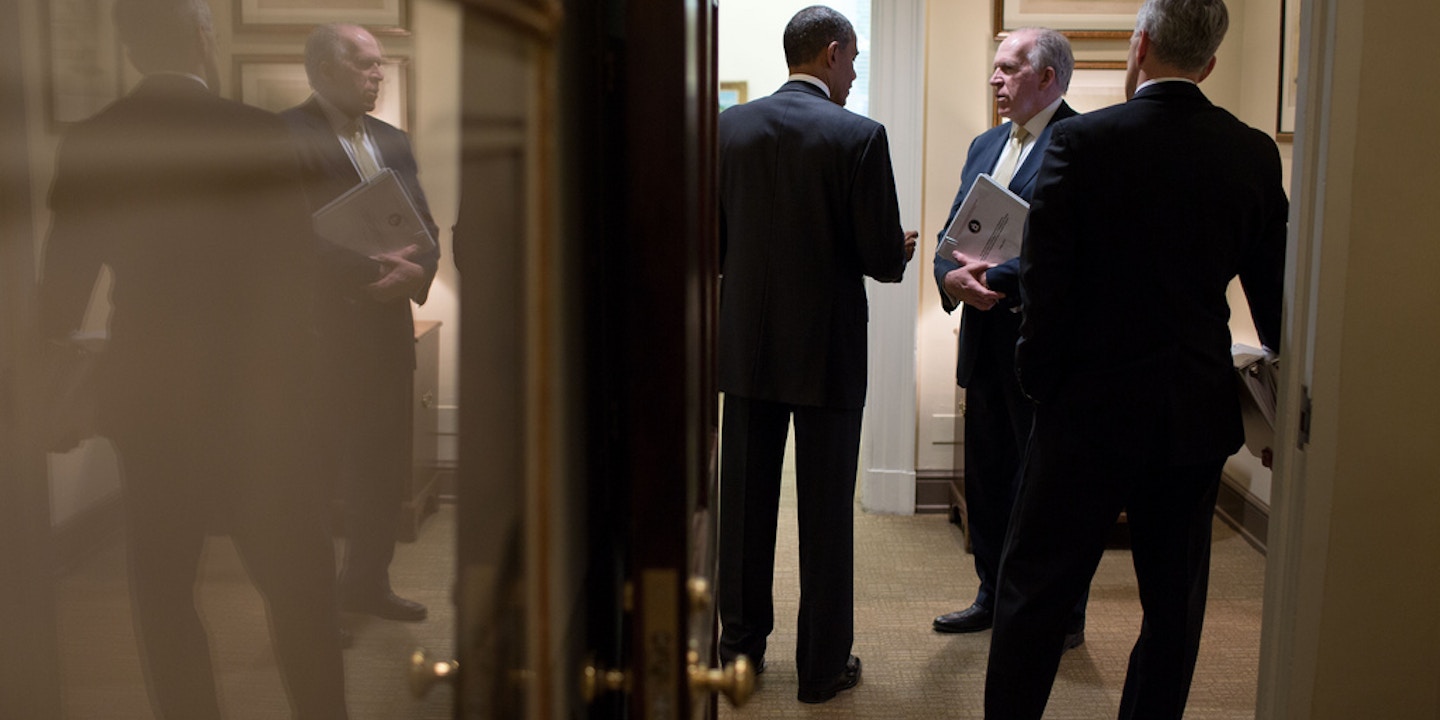 The fight between the CIA and the Senate Intelligence Committee over the Committee’s Torture Report – which Dan Froomkin covered here – has now zeroed in on the White House.

Did the White House order the CIA to withdraw 920 documents from a server made available to Committee staffers, as Senator Dianne Feinstein says the agency claimed in 2010? Were those documents – perhaps thousands of them – pulled in deference to a White House claim of executive privilege, as Senator Mark Udall and then CIA General Counsel Stephen Preston suggested last fall? And is the White House continuing to withhold 9,000 pages of documents without invoking privilege, as McClatchy reported yesterday?

We can be sure about one thing: The Obama White House has covered up the Bush presidency’s role in the torture program for years. Specifically, from 2009 to 2012, the administration went to extraordinary lengths to keep a single short phrase, describing President Bush’s authorization of the torture program, secret.

Some time before October 29, 2009, then National Security Advisor Jim Jones filed an ex parte classified declaration with the U.S. District Court for the Southern District of New York, in response to a FOIA request by the ACLU seeking documents related to the torture program. In it, Jones argued that the CIA should not be forced to disclose the “source of the CIA’s authority,” as referenced in the title of a document providing “Guidelines for Interrogations” and signed by then CIA Director George Tenet. That document was cited in two Justice Department memos at issue in the FOIA. Jones claimed that “source of authority” constituted an intelligence method that needed to be protected.

The Obama Administration successfully appealed a judge’s ruling to release the redacted part of this title describing under what authorities torture was conducted. Document obtained by ACLU under FOIA.

As other documents and reporting have made clear, the source of authority was a September 17, 2001 Presidential declaration authorizing not just detention and interrogation, but a range of other counterterrorism activities, including targeted killings.

Both former CIA Director Michael Hayden and former CIA Acting General Counsel John Rizzo have made clear that the torture program began as a covert operation. “A few days after the [9/11] attacks, President Bush signed a top-secret directive to CIA authorizing an unprecedented array of covert actions against Al Qaeda and its leadership.” Rizzo explained in 2011. One of those actions, Rizzo went on, was “the capture, incommunicado detention and aggressive interrogation of senior Al Qaeda operatives.”

As Steven Aftergood, director of the Federation of American Scientists Project on Government Secrecy, noted  in 2009 – shortly after Hayden revealed that torture started as a covert operation – this means there should be a paper trail implicating President Bush in the torture program. “[T]here should be a Presidential ‘finding’ authorizing the program,” he said, “and [] such a finding should have been provided to Congressional overseers.”

The National Security Act dictates that every covert operation must be supported by a written declaration finding that the action is necessary and important to the national security. The Congressional Intelligence committees – or at least the Chair and Ranking Member – should receive notice of the finding.

But there is evidence that those Congressional overseers were never told that the finding the president signed on September 17, 2001 authorized torture. For example, a letter from then ranking member of the House Intelligence Committee, Jane Harman, to the CIA’s General Counsel following her first briefing on torture asked: “Have enhanced techniques been authorized and approved by the President?” The CIA’s response at the time was simply that “policy as well as legal matters have been addressed within the Executive Branch.”

Nevertheless, the finding does exist. The CIA even disclosed its existence in response to the ACLU FOIA, describing it as “a 14-page memorandum dated 17 September 2001 from President Bush to the Director of the CIA pertaining to the CIA’s authorization to detain terrorists.” In an order in the ACLU suit, Judge Alvin K. Hellerstein confirmed that the declaration was “intertwined with” the administration’s effort to keep the language in the Tenet document hidden. When the administration succeeded in keeping that short phrase secret, all effort to release the declaration also ended.

Enduring confusion about this particular finding surely exists because of its flexible nature. As Bob Woodward described in Bush at War, CIA Director Tenet asked President Bush to sign “a broad intelligence order permitting the CIA to conduct covert operations without having to come back for formal approval for each specific operation.” As Jane Mayer described in The Dark Side, such an order not only gave the CIA flexibility, it also protected the President. “To give the President deniability, and to keep him from getting his hands dirty, the finding called for the President to delegate blanket authority to Tenet to decide on a case-by-case basis whom to kill, whom to kidnap, whom to detain and interrogate, and how.”

When George Tenet signed written guidelines for the CIA’s torture program in 2003, however, he appeared to have deliberately deprived the President of that deniability by including the source of CIA’s authorization – presumably naming the President – in a document interrogators would see. You can’t blame the CIA Director, after all; Tenet signed the Guidelines just as CIA’s Inspector General and DOJ started to review the legality of the torture tactics used against detainees like Abd al-Rahim al-Nashiri, who was threatened with a drill and a gun in violation of DOJ’s ban on mock executions.

The White House’s fight to keep the short phrase describing Bush’s authorization of the torture program hidden speaks to its apparent ambivalence over the torture program. Even after President Obama released the DOJ memos authorizing torture – along with a damning CIA Inspector General Report and a wide range of documents revealing bureaucratic discussions within the CIA about torture – the White House still fought the release of the phrase that would have made it clear that the CIA conducted this torture at the order of the president. And it did so with a classified declaration from Jones that would have remained secret had Judge Hellerstein not insisted it be made public.

As Aftergood noted, such White House intervention in a FOIA suit is rare. “The number of times that a national security advisor has filed a declaration in a FOIA lawsuit is vanishingly small,” he said. “It almost never happens.” But as ACLU Deputy Legal Director Jameel Jaffer noted of the finding, “It was the original authority for the CIA’s secret prisons and for the agency’s rendition and torture program, and apparently it was the authority for the targeted killing program as well.  It was the urtext.  It’s remarkable that after all this time it’s still secret.”

President Obama’s willingness to go to such lengths to hide this short phrase may explain the White House’s curious treatment of potentially privileged documents with the Senate now – describing President Bush’s authorization of the torture program and its seemingly contradictory stance supporting publishing the Torture Report while thwarting its completion by withholding privileged documents. After all, the documents in question, like the reference to the presidential finding, may deprive the President of plausible deniability.

Finally, the White House’s sensitivity about documents involved in the torture program may stem from the structure of the finding. As John Rizzo made clear, the finding authorizes not just torturing, but killing, senior al Qaeda figures. Bob Woodward even reported that that CIA would carry out that killing using Predator drones, a program CIA still conducts. And in fact, when the Second Circuit ultimately ruled to let the White House to keep the authorization phrase secret, it did so because the phrase also relates to “a highly classified, active intelligence activity” and “pertains to intelligence activities unrelated to the discontinued [torture] program.” Given what we know about the September 17, 2001 finding, that may well refer to President Obama’s still active drone program.

In any case, the White House’s seemingly contradictory statements about the Torture Report might best be understood by its past treatment of CIA documents. By releasing the DOJ memos and other materials, the White House provided what seemed to be unprecedented transparency about what the CIA had done. But all the while it was secretly hiding language describing what the White House has done.